Photoshop has been used for a variety of different reasons. Whether it’s to edit the colors in a photo to make them more vibrant or to fix some minor imperfections, photoshop has been utilized greatly. Even though photoshop has some pretty amazing uses, there are also some pretty hilarious ways to edit photos. Here’s are photos from an epic photoshop battle that brought the Internet together. You’ll laugh so hard at #12 & #3! 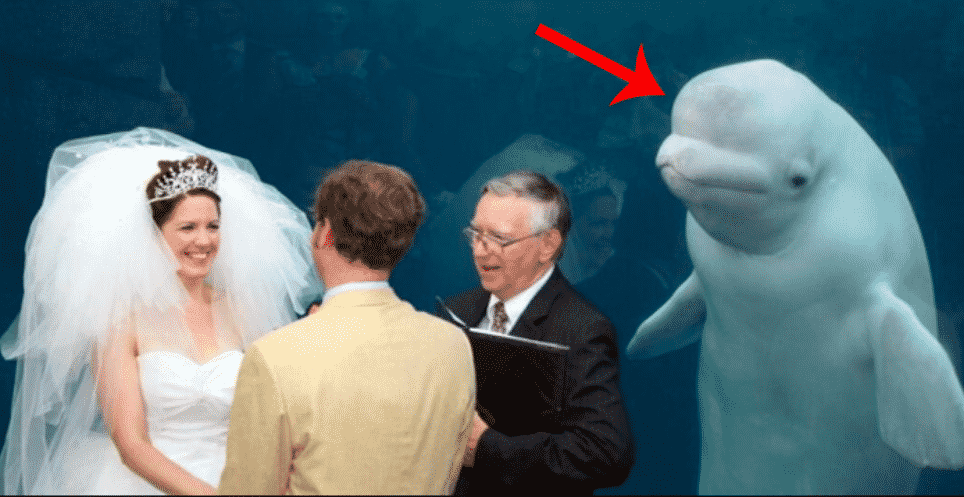 Many newlywed couples come to the Mystic Aquarium in Connecticut to capture photos in front of the tanks. Inside of the tanks are the cutest Beluga whales ever. However, the Internet decided to take this photo and run wild with it. 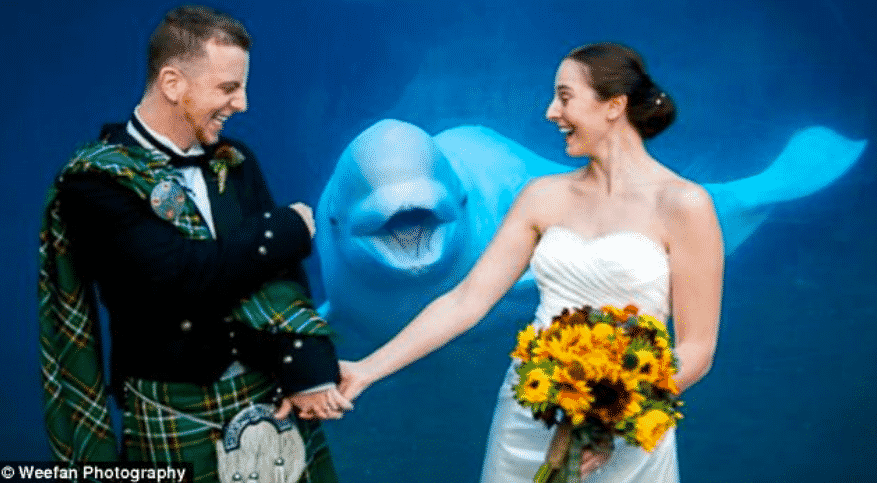 Couples head to the aquarium in hopes that they’ll be photobombed by the whales. Unlike other photobombs, which are usually unappreciated, these are hoped for. Just check out this photo above! 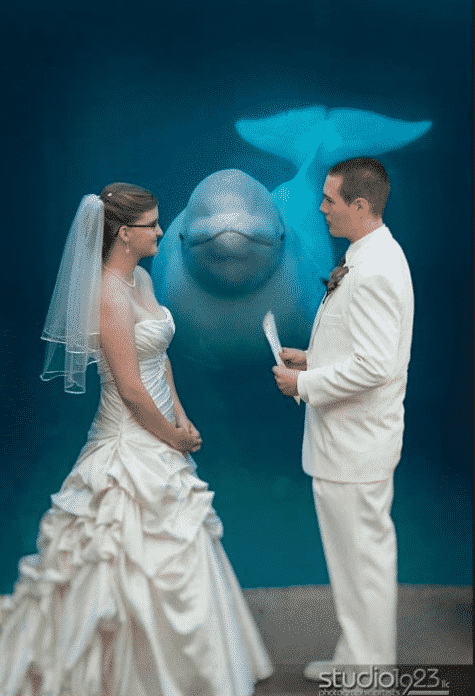 Many couples find the moment to be romantic. After all, it is pretty cool to have a beluga whale hanging out in the back of your photo. The whales seem to look pretty interested in what’s going on. 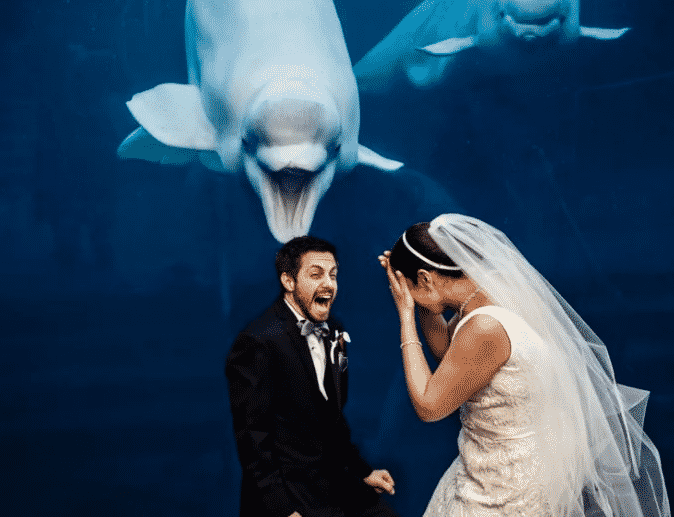 However, Reddit’s Internet army of trolls didn’t seem to find the photos quite as romantic as everyone else did. In fact, the found that the photos could be used as the perfect way to battle out their photoshop skills and you won’t believe the visuals they managed to create. 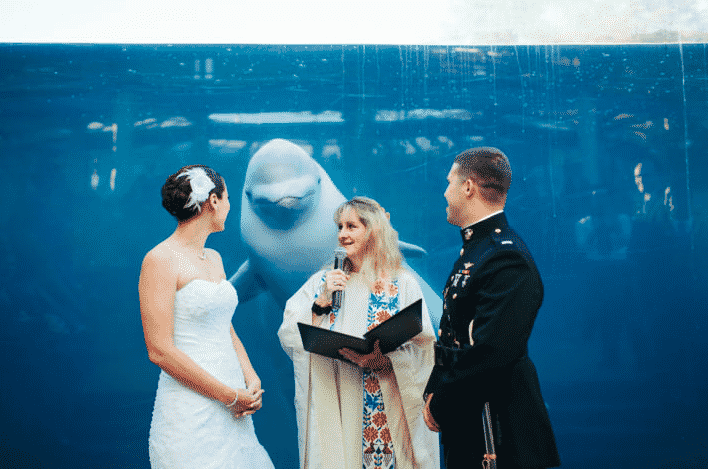 Suddenly an online photoshop battle broke out. Everyone was competing to see who could make the funniest edits. Check it out for yourself and see which one makes you laugh the hardest. 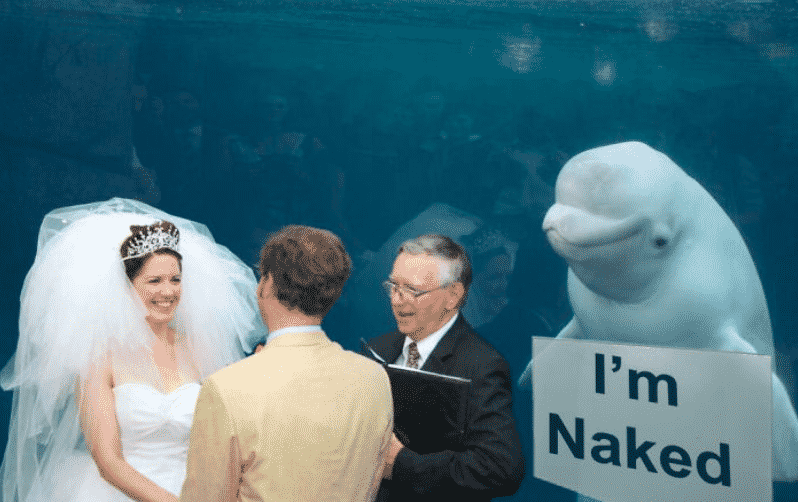 It’s a good thing that beluga whale has that sign to cover him up! After all, it is a formal event and he didn’t even bring his tux. Next we have a photo displaying true unrequited love. 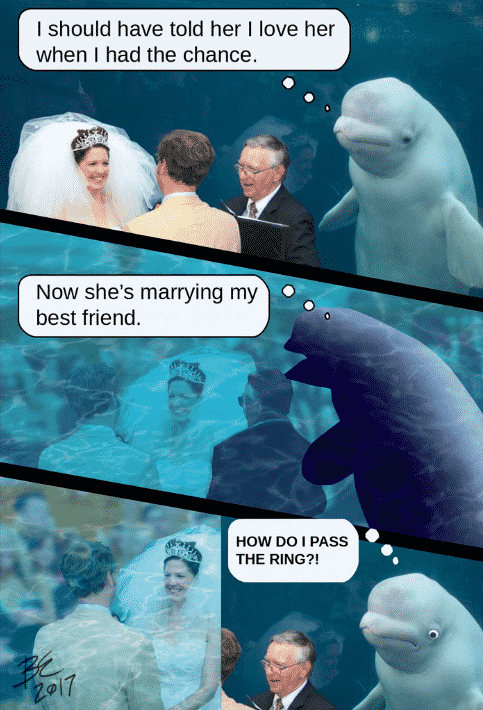 It’s the oldest story in the book, the one with the one that got away. Seems like this beluga whale is feeling it hard. 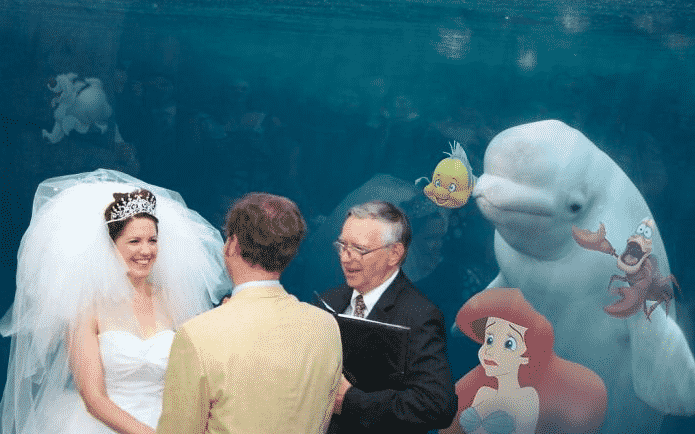 The gang’s all here and now the wedding can finally commence. Seems like no one told Ariel that Prince Eric was getting married to someone else.

Our next photoshopped image takes things to an alternate universe! 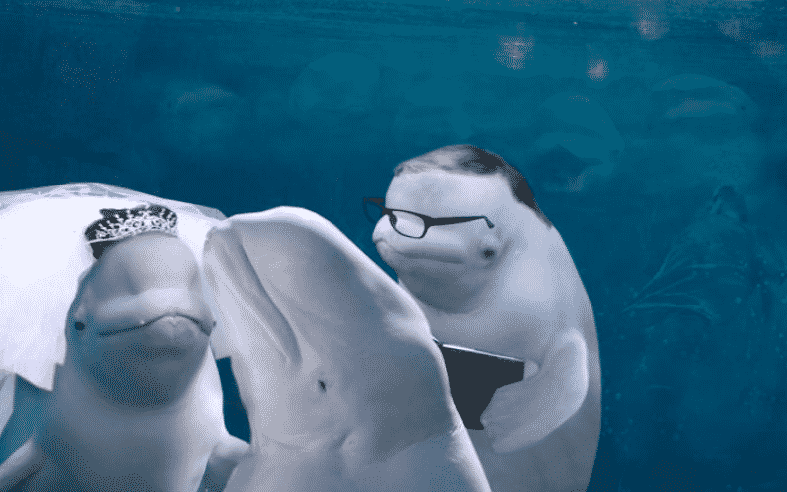 “Whale you marry me?!” Here we have an all beluga whale marriage ceremony happening. Notice how they even matched the reflection on the glass perfectly. 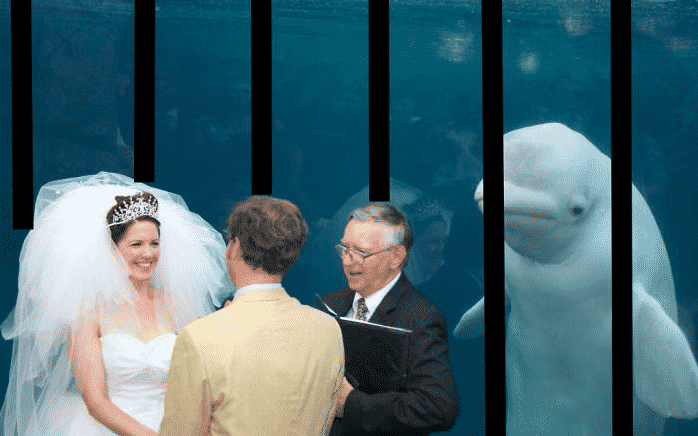 Welp, here’s a serious truth bomb dropping on us. A lot of the photoshoppers had a problem with the idea of the whales being confined to captivity. Here’s their representation of it. 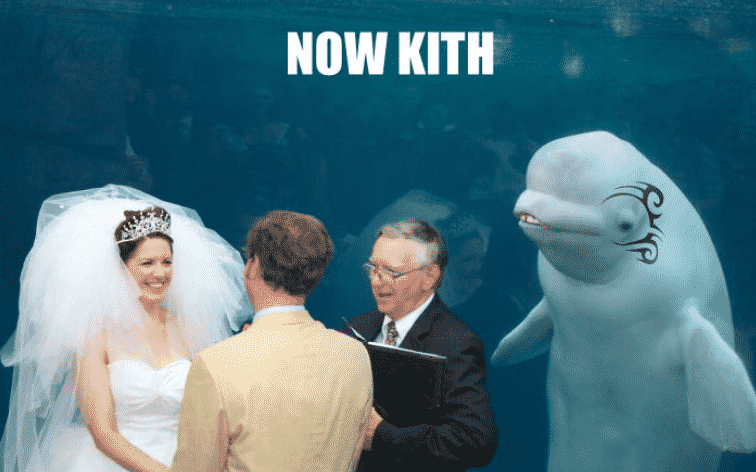 If you don’t get the reference then this one will just fly right by you. We find that the teeth were a perfect addition to this one. 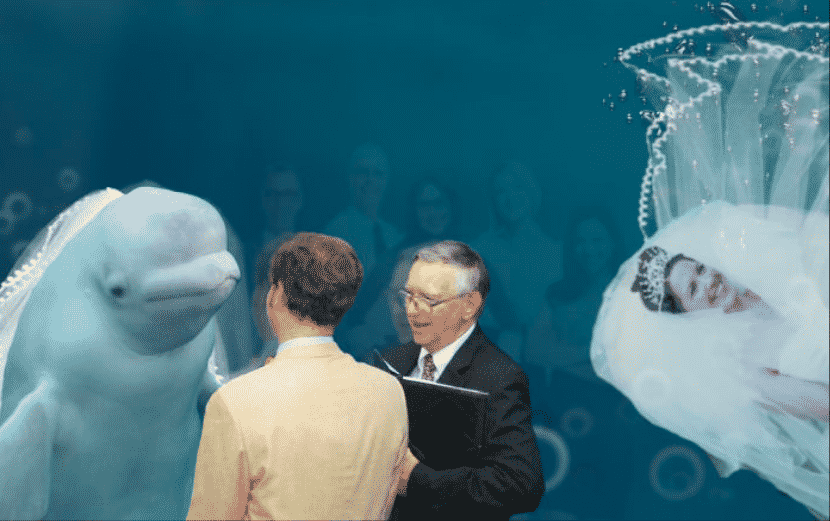 “Sorry Carol, this is my wedding now.” The would-be bride still looks pretty happy to us. Guess she wasn’t too thrilled about getting married in the first place. 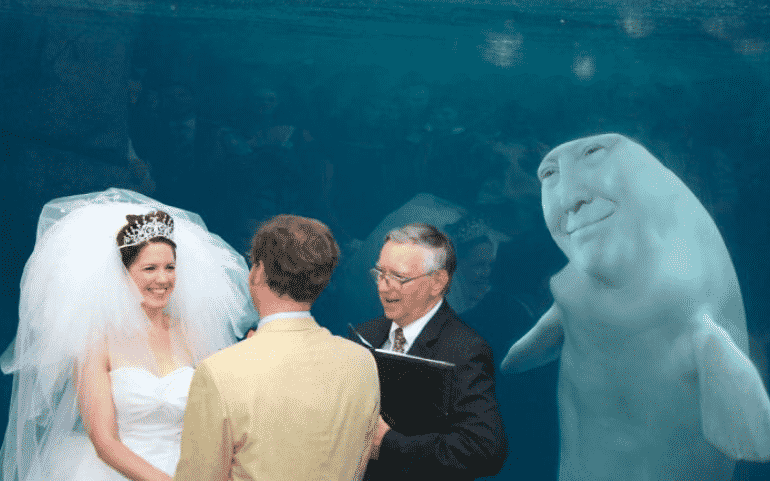 It’s a serious event when President Beluga Whale comes to attend your wedding. Look at him smiling down upon them with HUGE approval. 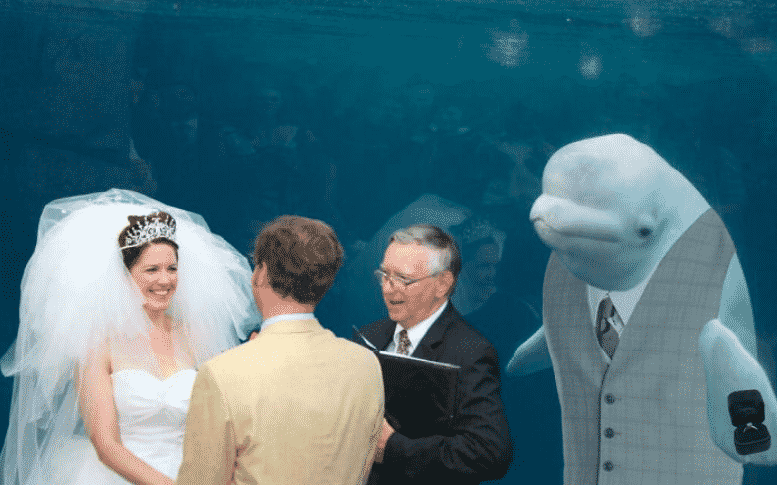 Look at how sharply dressed this beluga whale is. He sure knows how to clean up for a solid occasion.

Next we have a classic children’s television show adaption with your favorite yellow sponge! 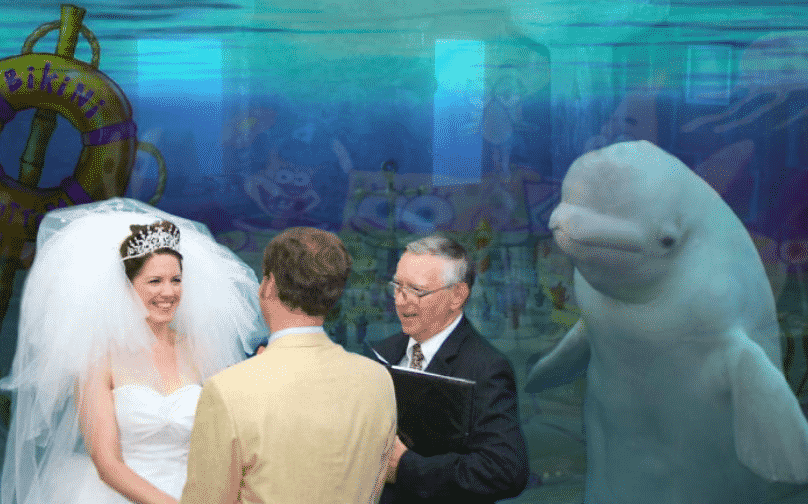 As you can see, all of the residents of Bikini Bottom came out to see this lovely wedding take place. Everyone looks excited except for Squidward – but that’s to be expected. 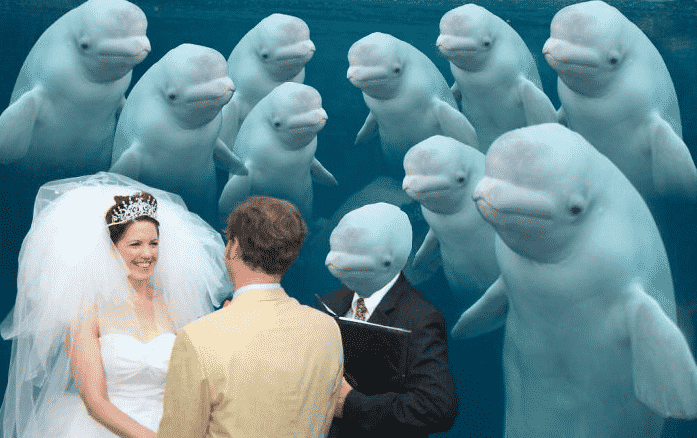 We’re pretty sure the couple didn’t expect such a turn out! Then again, they probably didn’t expect the ordained minister to be a beluga whale either. Life’s full of surprises… 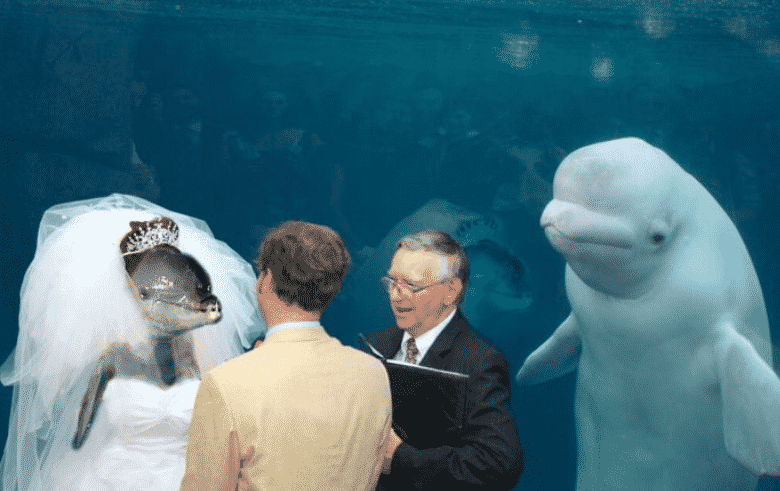 As you can see, this beluga whale showed up to be a supportive friend. Still, something about the photoshopping in this one kind of weirds us all out. Our next one is a great photoshop rendition of a classic film where Mrs. Robinson called all the shots.

If you’ve never seen The Graduate you won’t get the reference. However, if you have, then you’ll certainly be able to appreciate the detail in this one. 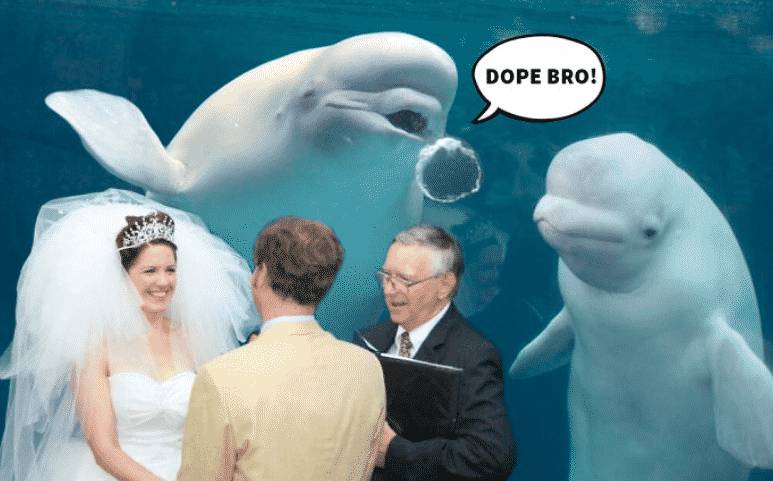 Looks like these two are pretty excited for their friend. After all nothing says approval like a, “Dope bro.” 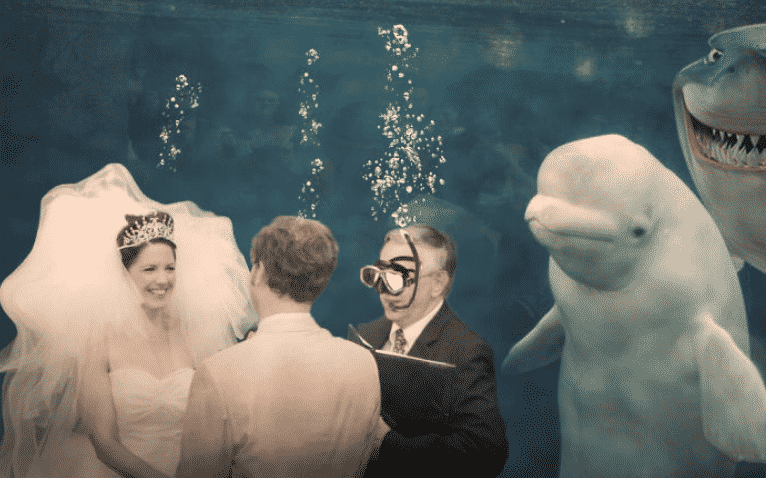 The shark in the background looks just about ready for lunch. We’re hoping whoever created this one remembered that “fish are friends not food.”