Flute-Playing Paddleboarder Gets The Surprise Of A Lifetime

How many of us can say we have the ability to just magically call animals over to us? We can bet not many. However, one woman swears that her flute playing brings all the whales over to her. So what happened when she tested her theory out? Well this paddleboarder was in for the thrill of a lifetime! 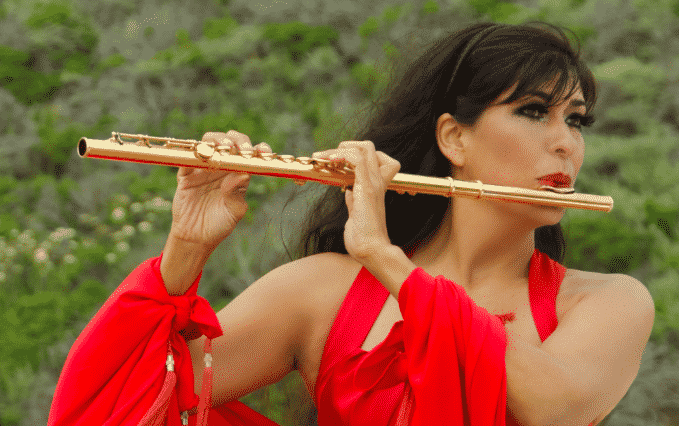 Viviana Guzmán is a Chilean professional flutist, composer, dancer and poet. The New York Times has even described her as an “imaginative artist.” Her talent has been recognized in countries around the world. 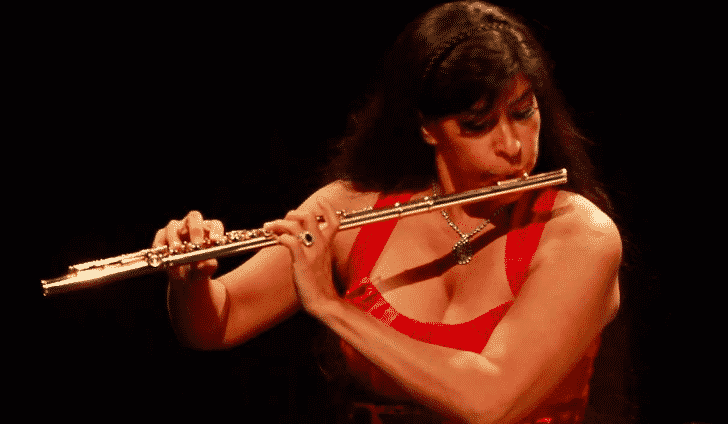 Guzmán performs over 80 concerts each year and incorporates tons of different things into her performances. Many of her shows include flute playing along with bellydancing. Her album has even received a Grammy nomination! 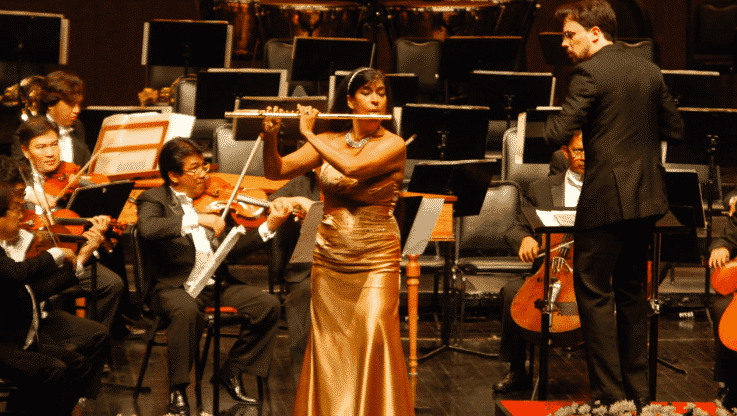 Guzmán has been featured on programs for PBS, ABC, CBS, NBC, FOX, Good Morning America and NPR. She continues to tour and even uploads videos onto her YouTube channel where she gets over 2.5 million views. Her life has been filled with tons of success thanks to her flute playing. 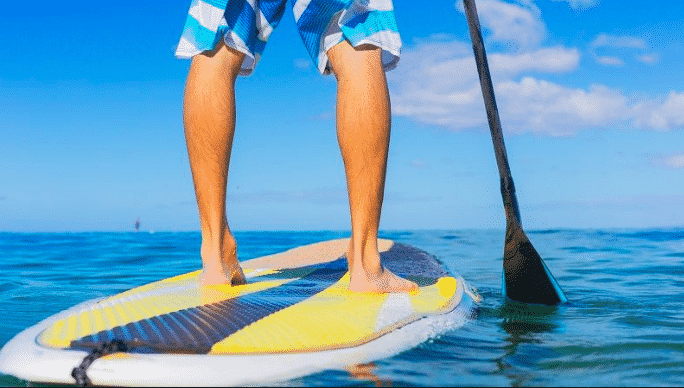 Outside of her flute playing, Guzmán also enjoys paddleboarding. For those that don’t know, paddleboarding is “the act of propelling oneself on a floating platform.” You then use either hands or a pole to help you move around in the water. 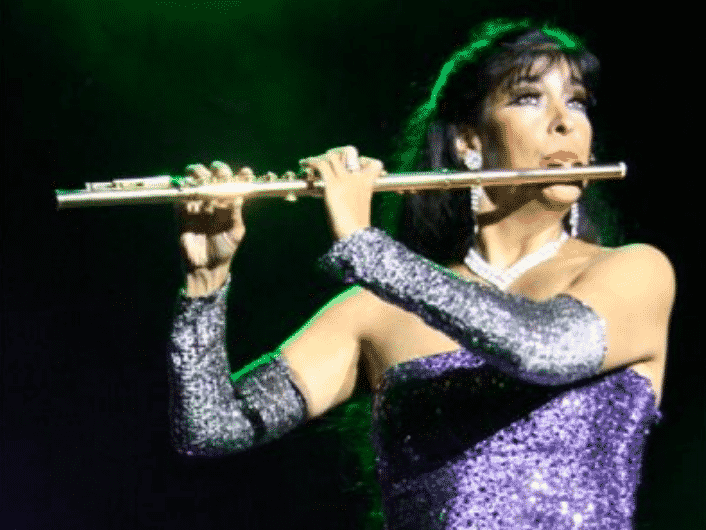 So Guzmán was enjoying a nice day out paddleboarding but her love for playing the flute wasn’t sitting on the back burner. For you see, Guzmán swears that when she plays her flute out in the water the whales, “they come!” 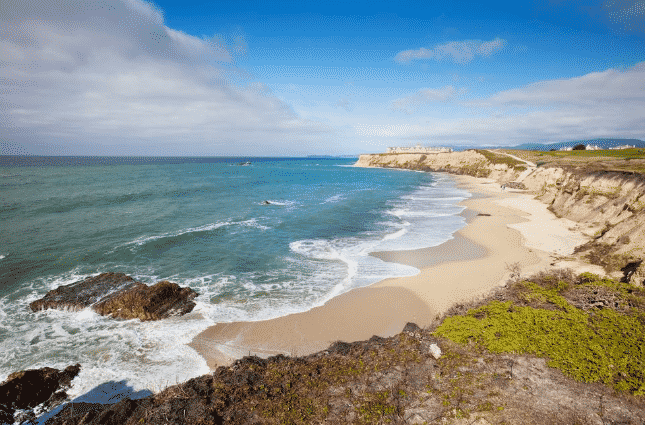 Guzmán was off on a day trip in Half Moon Bay, California. The flute player was paddleboarding around when she came way too close to an enormous whale. What happened next was totally unexpected… 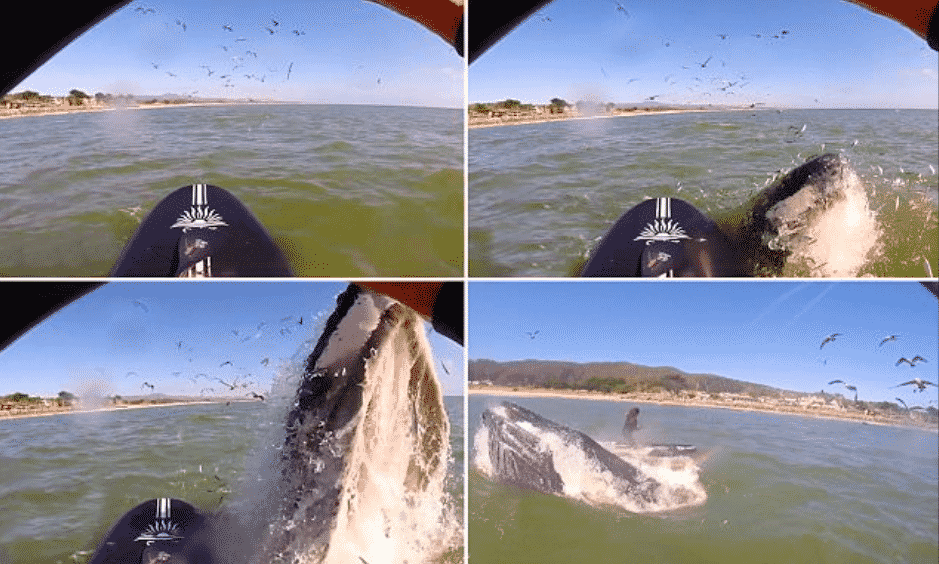 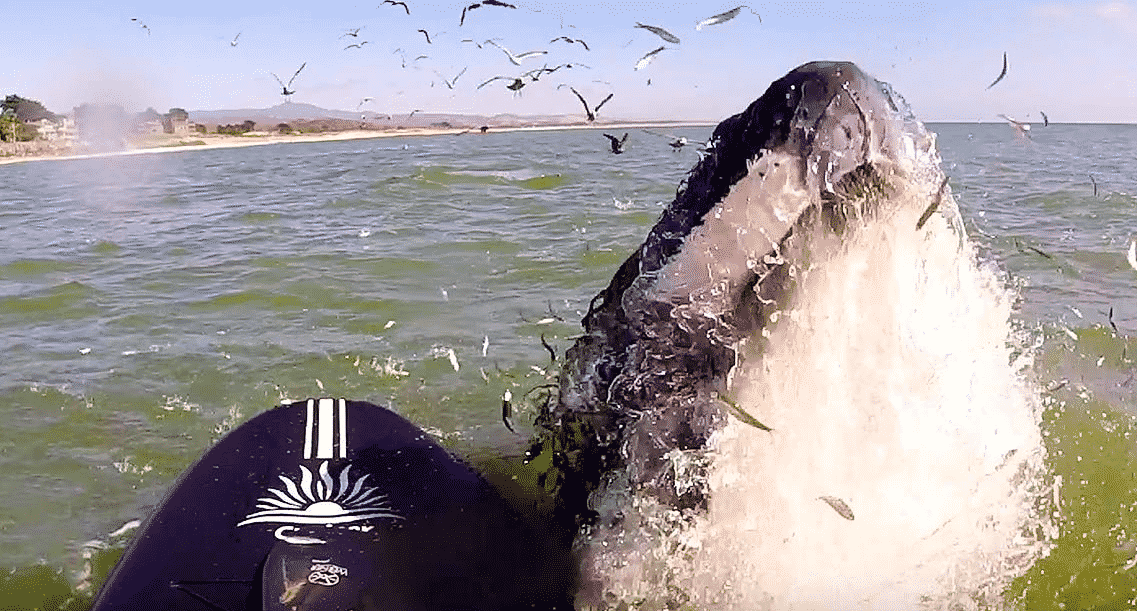 Although the whale was inching closer, Guzmán didn’t expect to see it at all. A fellow boarder continued to film the insane encounter. Then all of a sudden the whale decided to make its presence known! 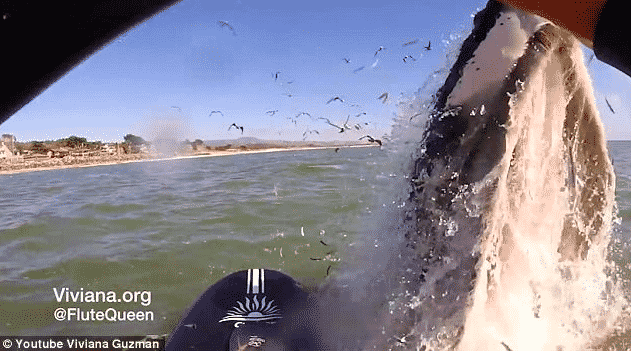 Suddenly, a young humpback whale lunged out of the water. From the video, you can see the whale coming out of the water with tons of fish in its mouth. Viviana was absolutely blown away by the encounter. 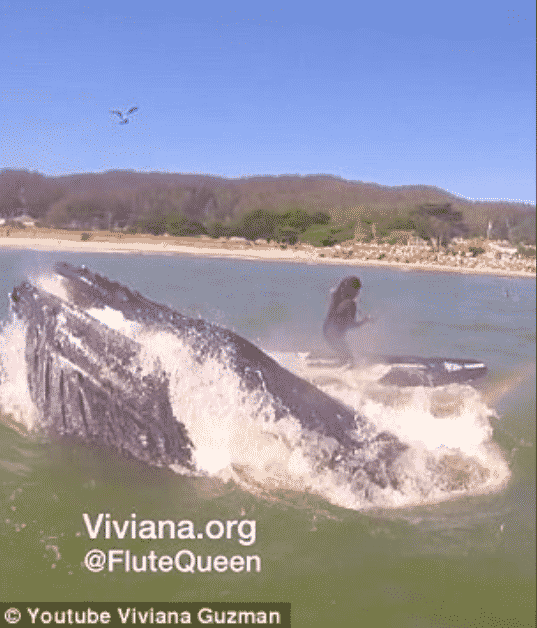 Viviana was so taken aback by what she saw that she almost fell off the board again. Luckily, she managed to keep her balance once more and stayed on top of the board. Both Viviana and the fellow boarder captured footage of the incredible moment and Viviana knew she had to share it.

Viviana decided to upload all of the footage onto her YouTube channel. In the description, Viviana wrote: “I play my flute for the whales, and they come!” The video has currently received over a million views! 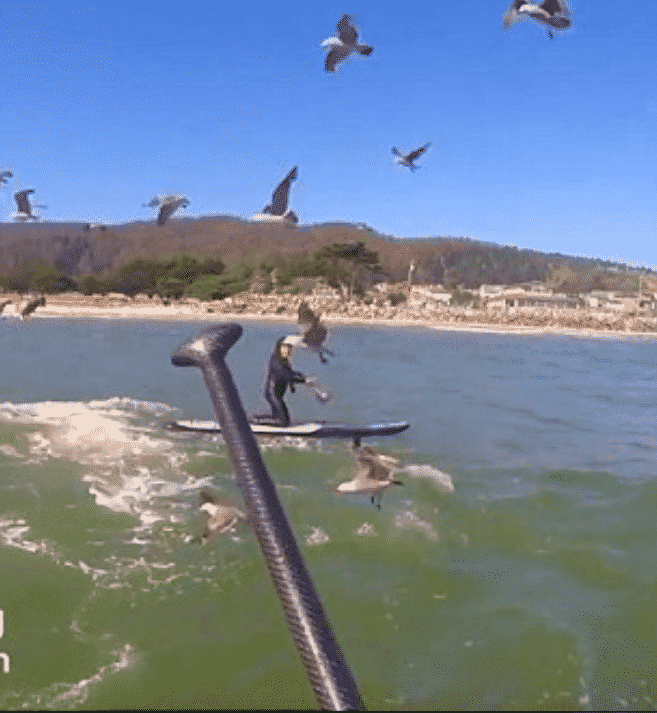 “I was paddle boarding when all of the sudden a juvenile humpback leaped out of the water and lunge fed right next to me!” Viviana wrote. Users were ecstatic over the opportunity to see such a stunning view of a whale. The comments section was filled with happy users. 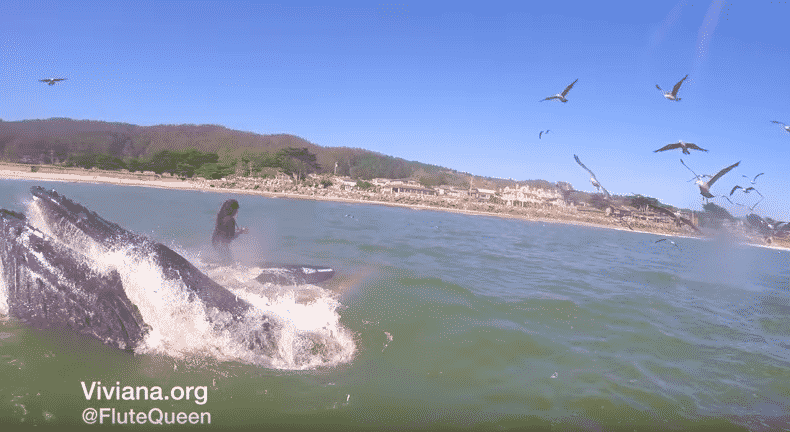 One user wrote: “I think I would have fallen right off the board and into the water if a whale surprised me like that.” Most people agreed that they wouldn’t have handled the situation as gracefully as Viviana did. Many were amazed at the situation in general. 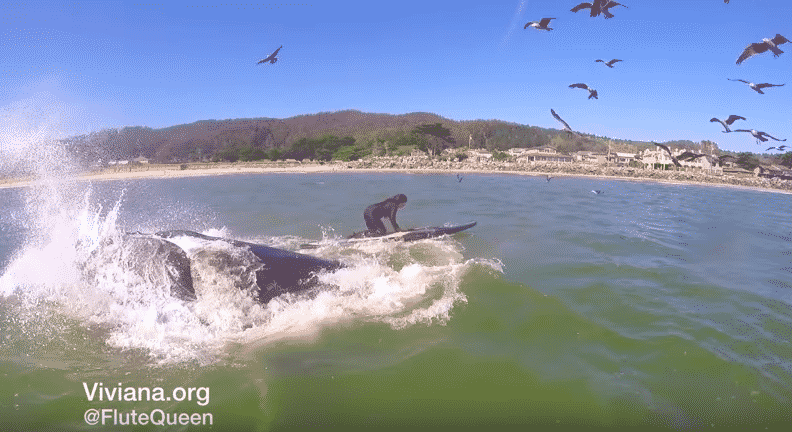 One commenter said, “That was beautiful, scary & awesome!” Another added on saying, “Wow – that’s a calf feeding and coming right up into your air space that you share with whales, too 🙂 you are super fortunate for the experience!” 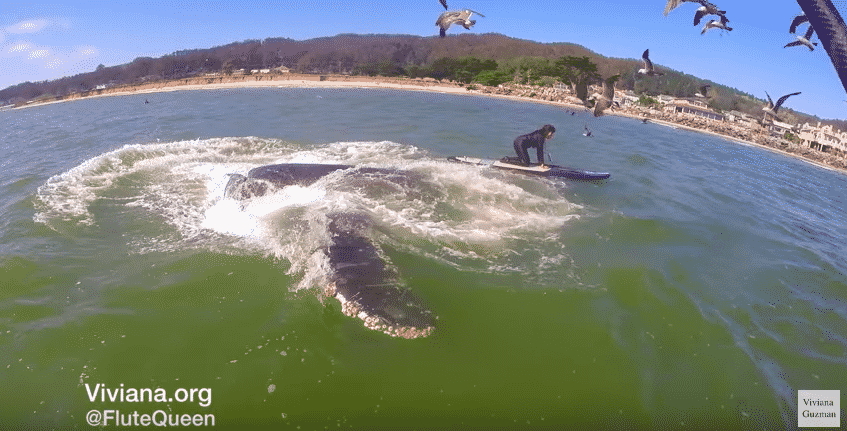 So, is it normal for a whale to get this close to humans? Believe it or not, but it actually isn’t. Whales tend to be very solitary creatures and prefer to be on their own. However, many people wonder if they are actually aggressive animals. 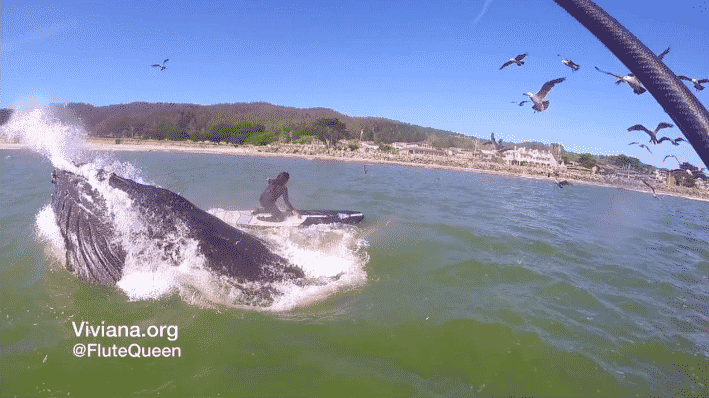 Generally speaking, whales are not an aggressive species. They do not display outward aggression towards humans, however, they can act in defense if they feel like they are being threatened. So are whale attacks towards humans common? 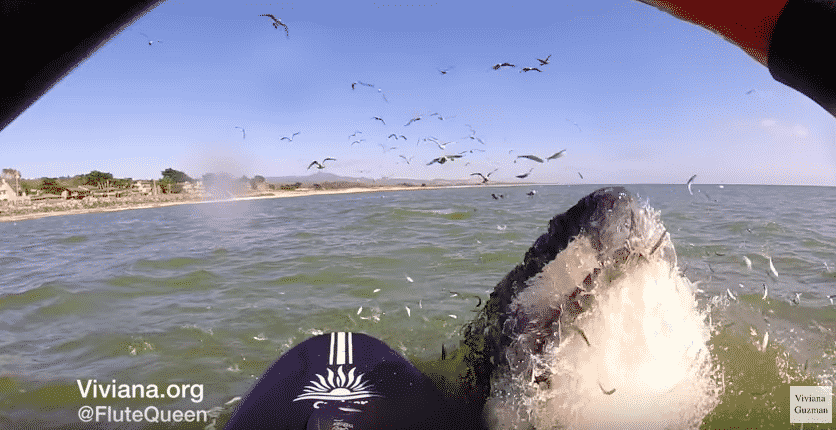 According to whalefacts.org: “While whale attacks occur on an extremely rare basis it is important to acknowledge that these situations can and do happen every once in a while, although these behaviors are very rare.” 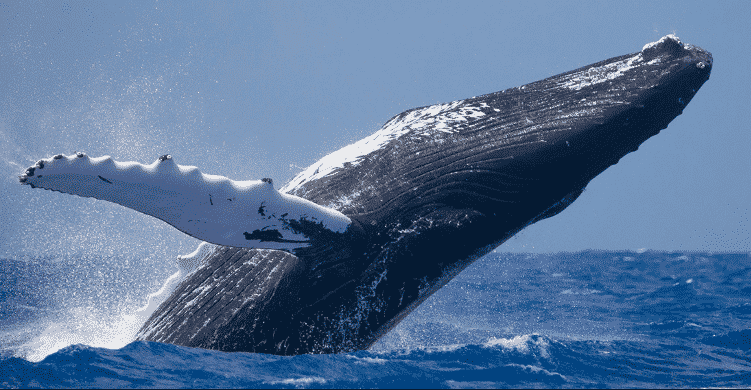 Image: the Shape of Life

The site continued to elaborate on the topic, stating: “A whale may attack a boat or other potential threat if it has experienced abuse in the past or becomes frightened due to loud noises or unfamiliar reactions caused by a ship or group of people.” 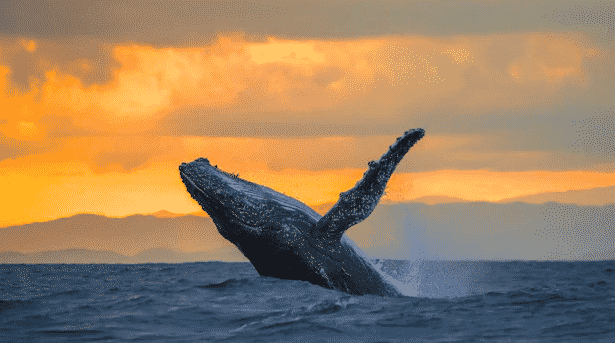 Luckily for Viviana, it seems like the young humpback whale was simply scoping out his breakfast. Viviana got a chance to play her flute for the whale to enjoy and in turn she enjoyed a view that not many people would ever get to see. 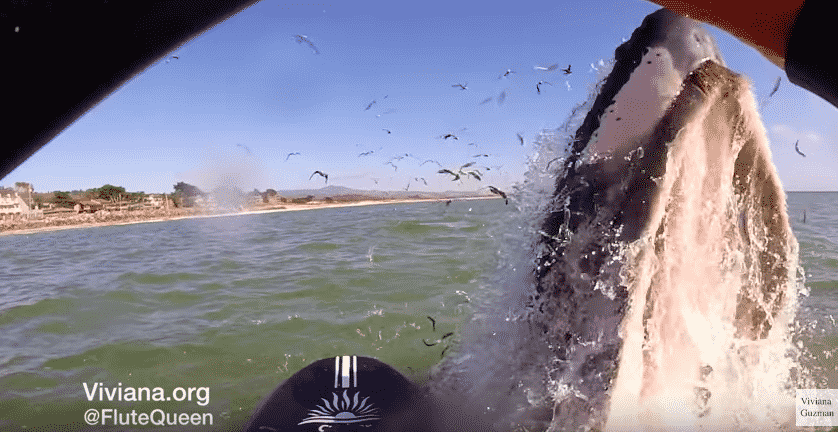 It is a truly magical situation to see woman and beast interact. Not only has Viviana managed to accomplish so much in her music career but she has also witnessed an enormous whale up close and personal.