Cats are just absolutely adorable, and we all can agree that they are one of the best pets ever. However, the cat in our story did not have such a good time. You will be shocked by what it had to go through, so keep on reading and find out more. 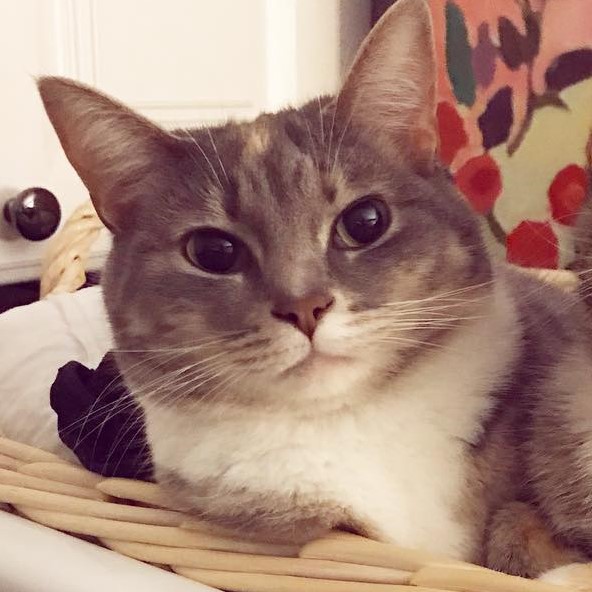 A few years ago a cute little stray cat showed up to a family’s doorway and they instantly fell in love with it. The cat wanted to make the house her new home and the family had no problem with it. They gave it the name Plop. Find out what they had to say on the next slide. 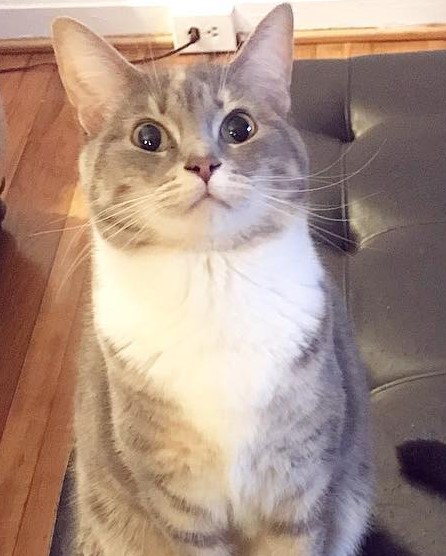 “We immediately bonded so she stayed for good.”, said Alex, a member of the family. However a few weeks later there was another surprise for them. “A few weeks later I realized that she was pregnant,” Alex said. However one of her kittens was very very special. 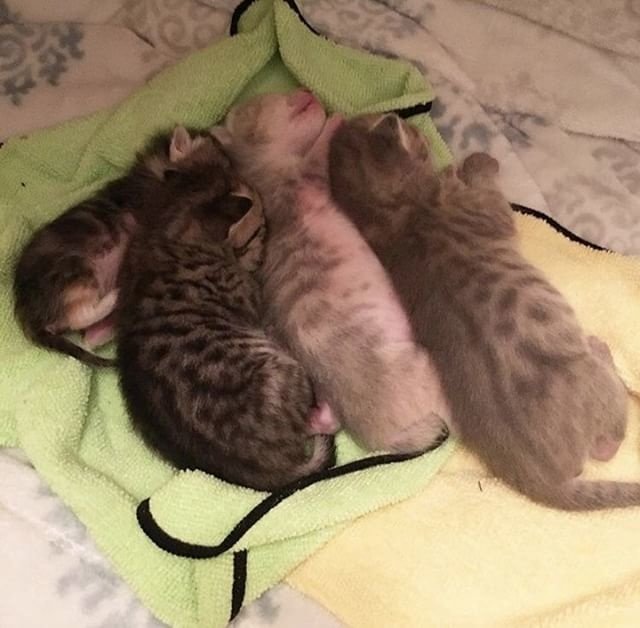 Mama Plop ended up giving birth to four adorable kittens. The runt of the litter was given the name Peanut or P for short. She was half the size of the other kittens! Find out more about it on the next slide. 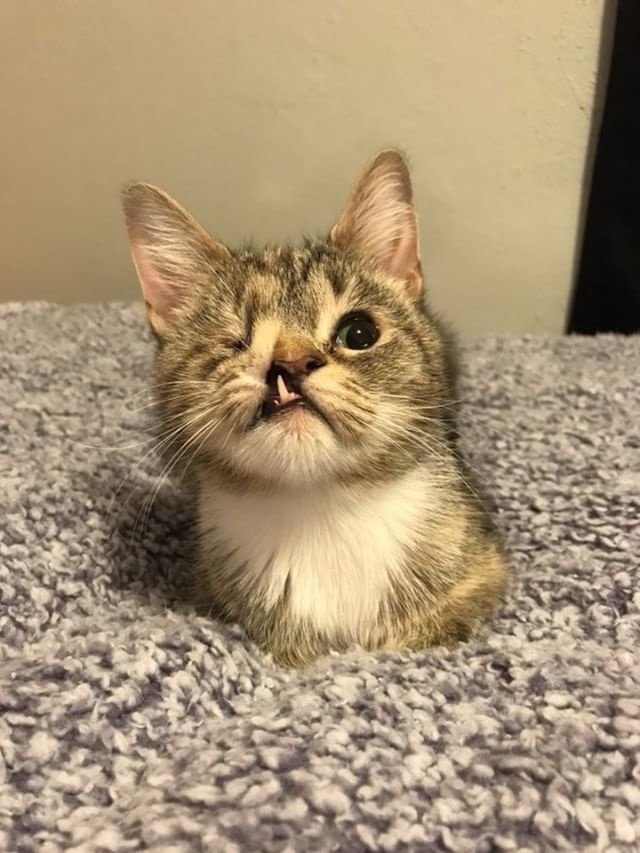 “I realized quickly that she was different when she wasn’t able to feed from her mom like the others so I bottle fed her until she was old enough to eat wet food,” Alex. That’s not the only thing that was different about P. More about her is coming up on the next slide. 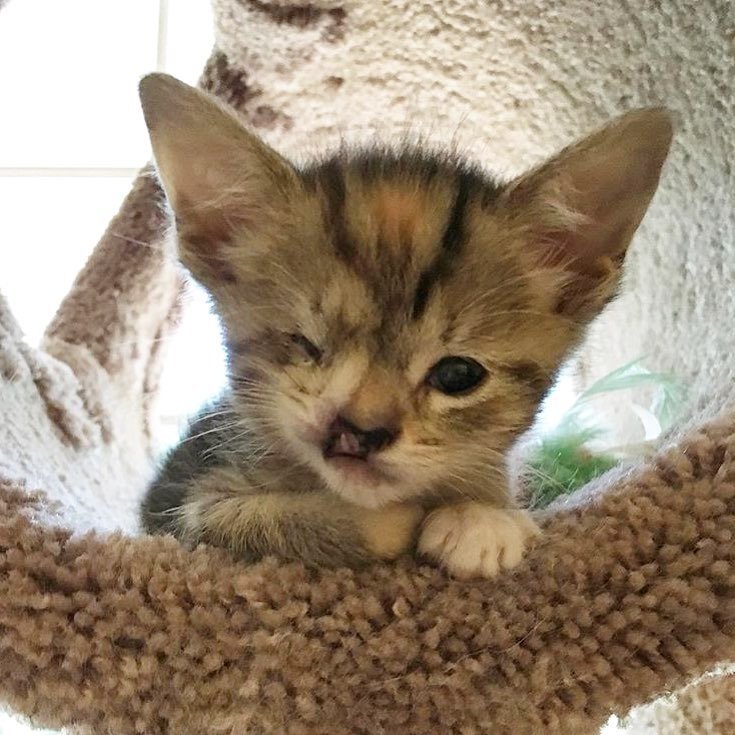 P couldn’t see until one day when one of her eyes finally cleared up and opened up. She was born without one of her eyes and was missing half of her nose. But that didn’t stop her! 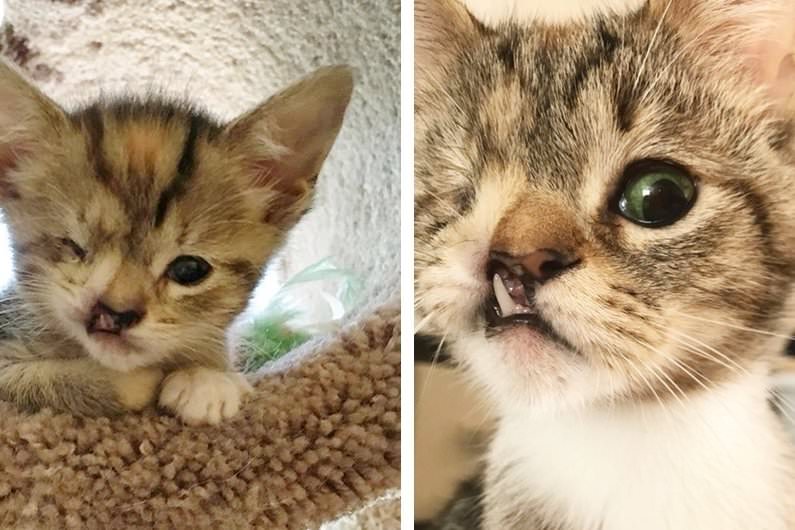 “She had defects on specifically one side of her body with the eye and nose. Luckily she is purrfectly healthy otherwise,” Alex said. As she began growing older one of her features became more prominent, read on to find out what it was. 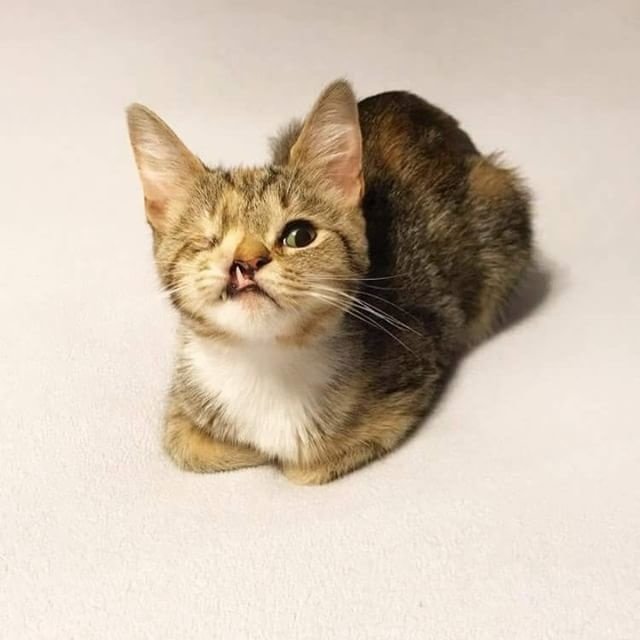 As she grew older her snaggletooth became more apparent but instead of making her look worse, it just made her look even cuter and more adorable than before! Read on to find out about how attached she is to her owners. 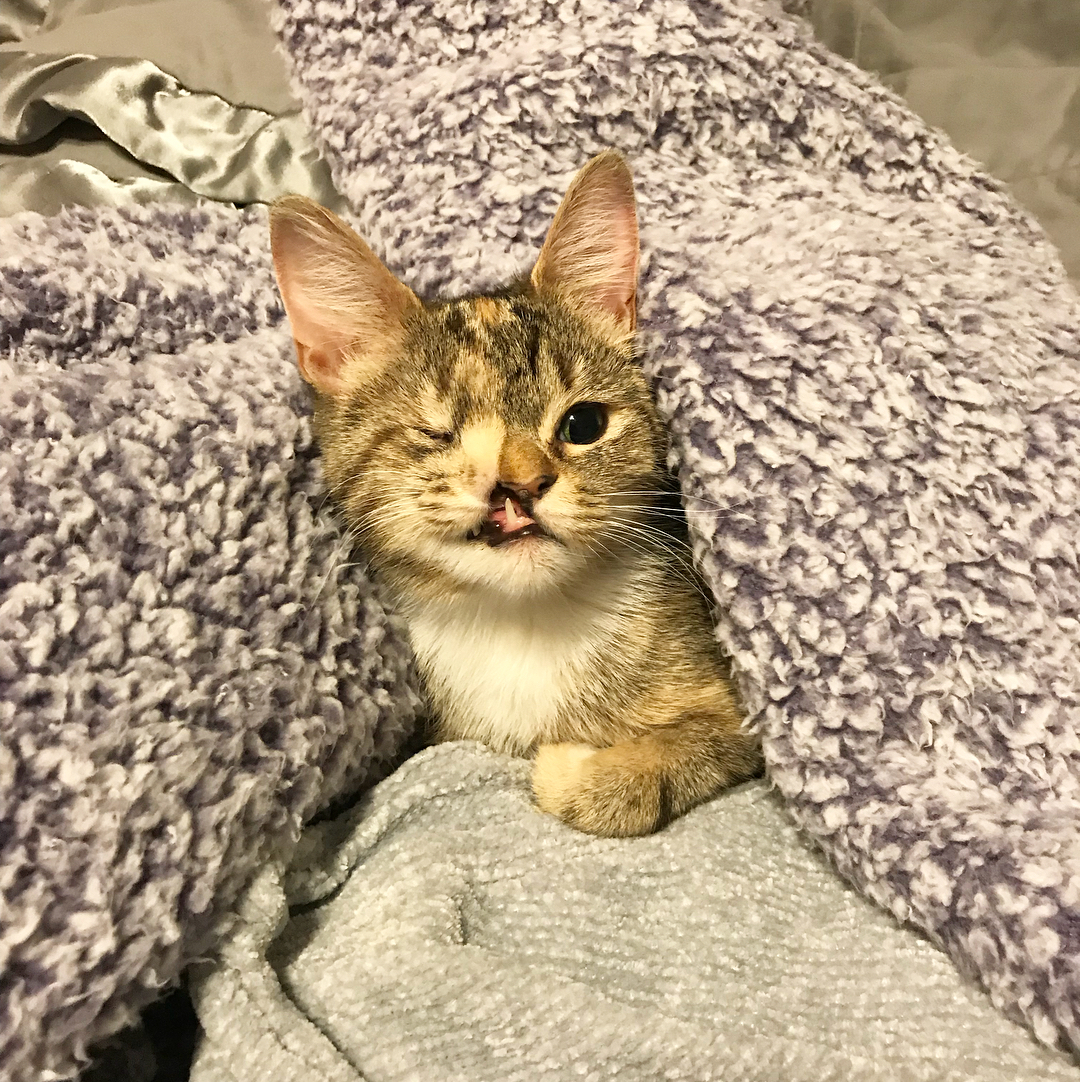 P is extremely attached to her owners and is always vying for their attention! “She has the sweetest neediest personality of any cat I’ve ever seen. She will come find me around the house and lead me to her food bowl to be petted.” said Alex. Find out more about her adventures on the next slide. 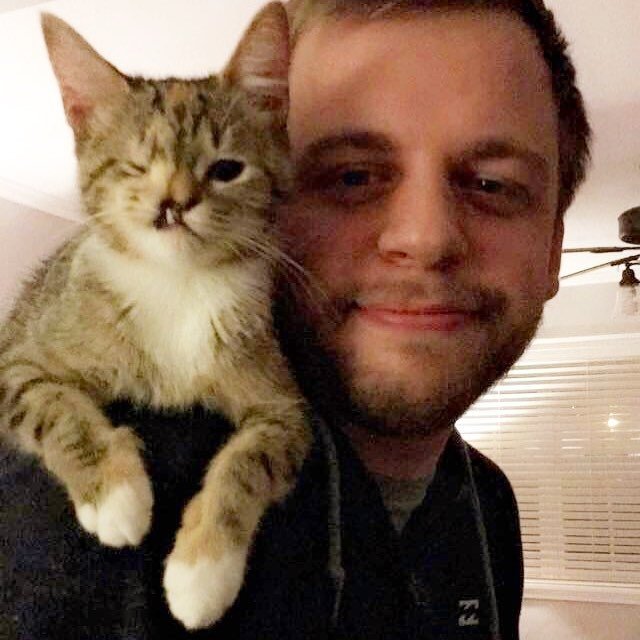 “She sits on her human dad’s shoulders every night around dinner time to watch me cook and get some treats. She is truly my best friend,” Alex said. Check out some the other adorable stuff P does in the next slide.

P also loves to spend time with her mommy and here you can see them both looking cute in this picture. Now let’s get back to some of P’s features… 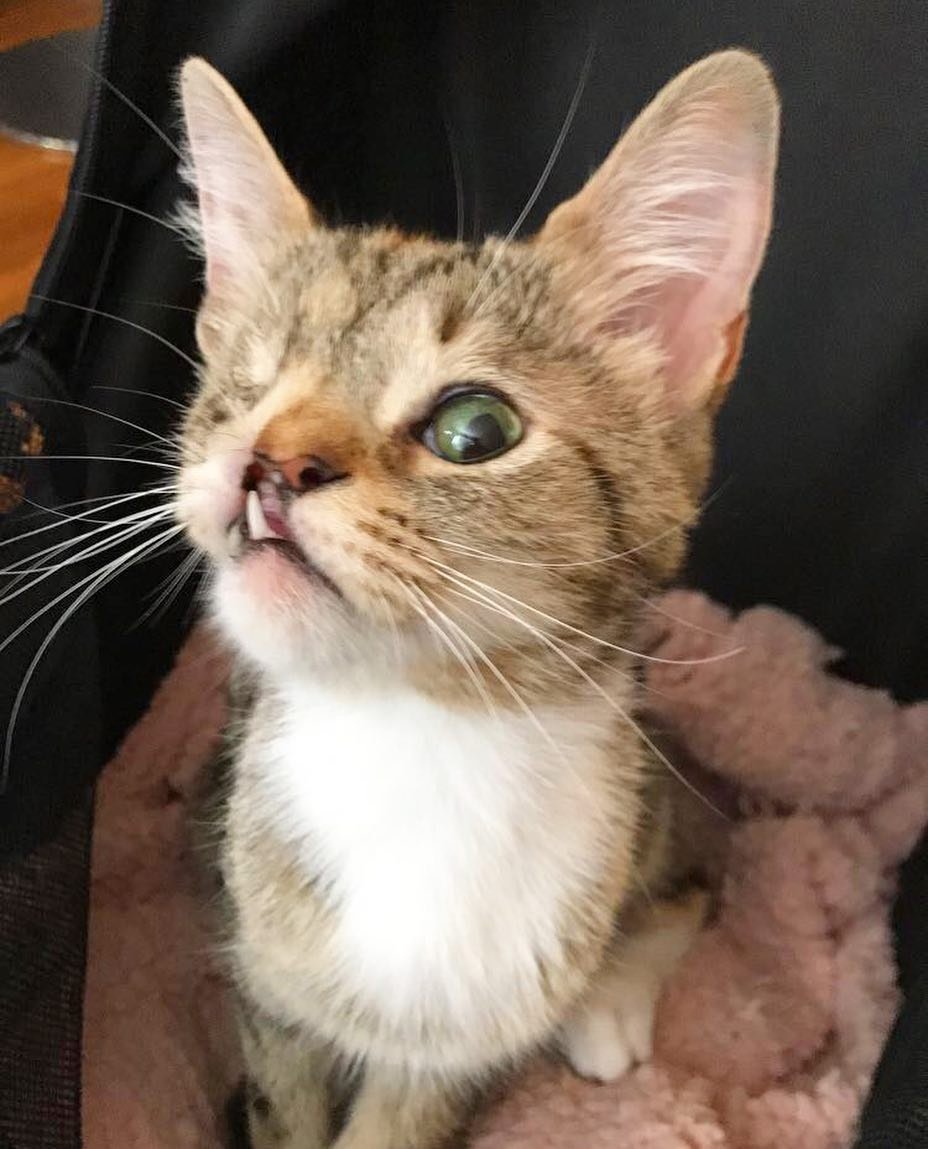 As of now, P is 2 years old but still only weighs around 4 pounds. That means that she’s never going to become very big in size but that just makes her even cuter. Then a new surprise came about. Read on to find out about it. 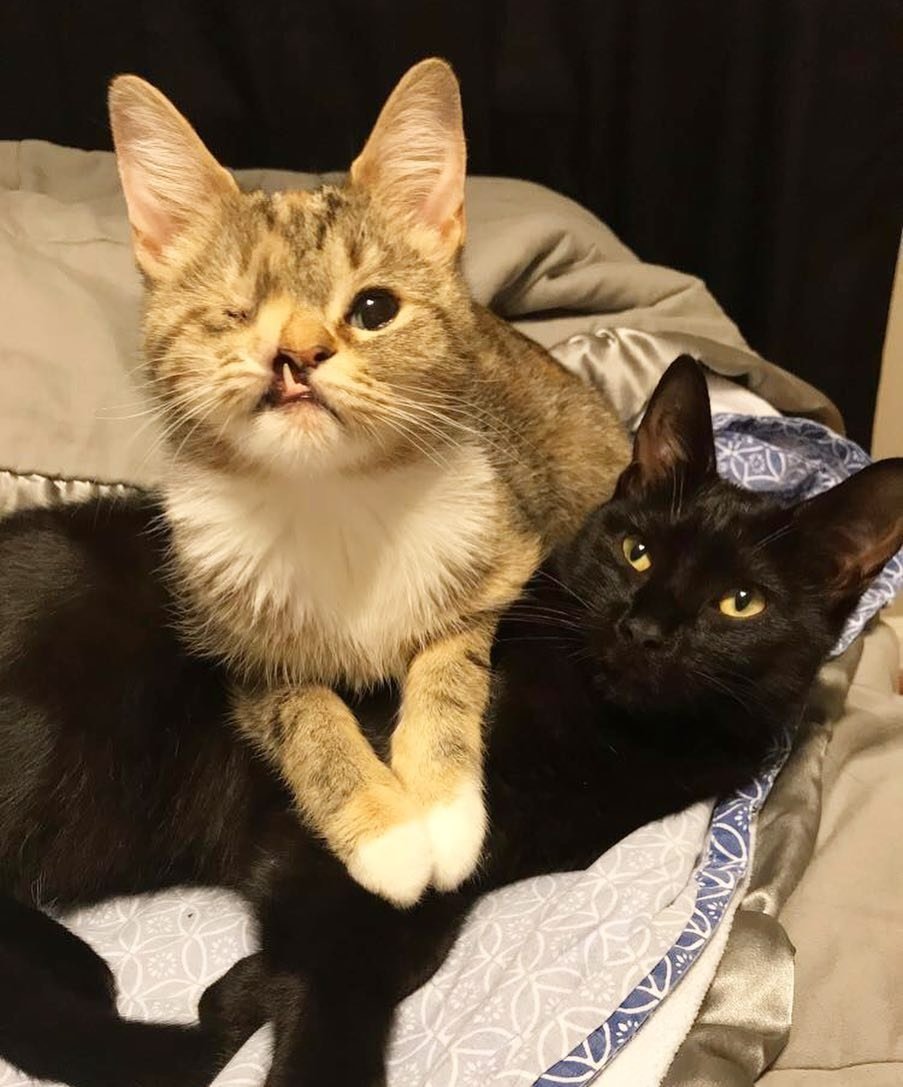 Recently the family got a new cat and now P has a new sister, named Pheobe. They quickly became really good friends, but there is a funny thing about this pair. Keep reading to find it out. 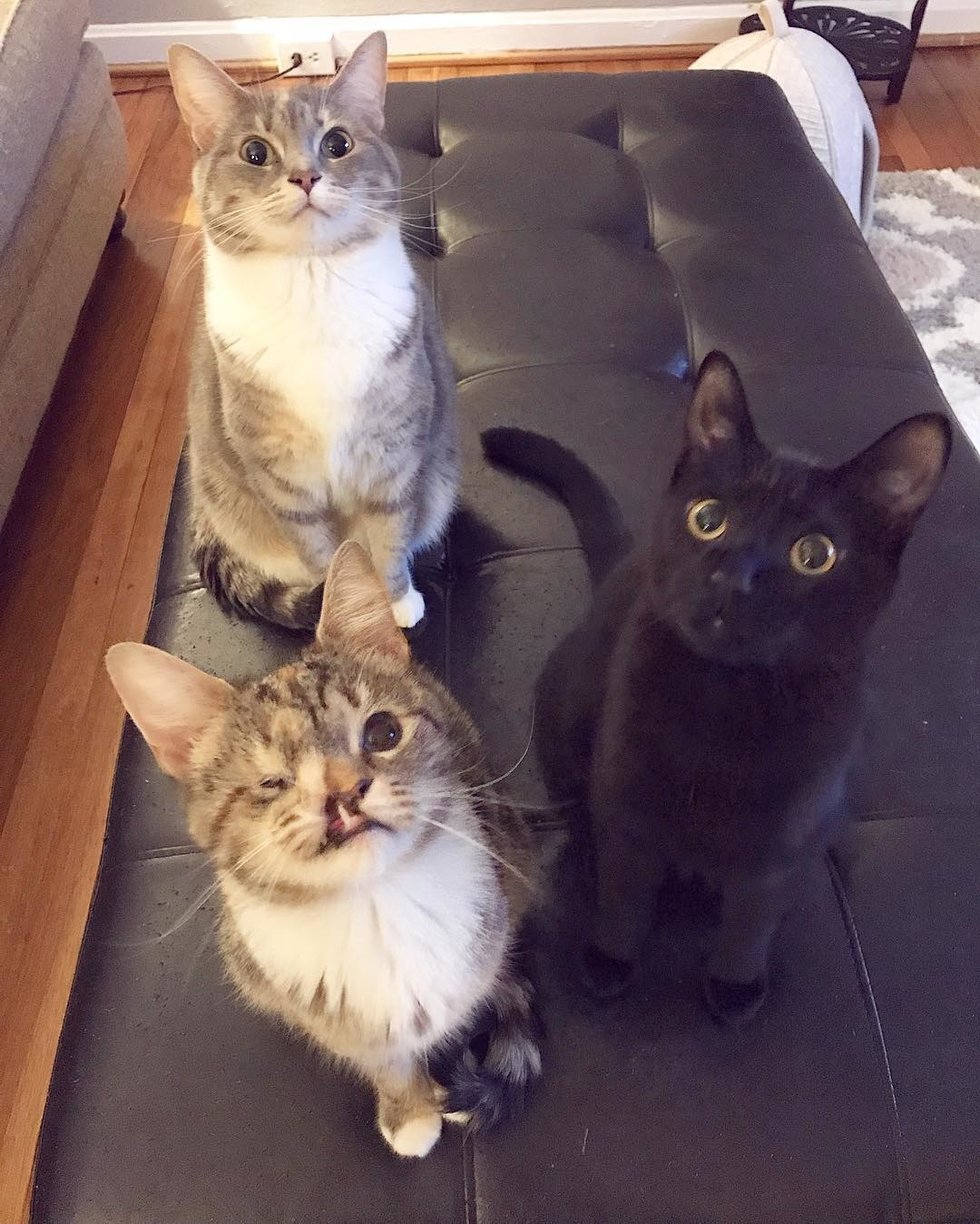 At only 6 months old, Phoebe has already outgrown 2-year old P but that means nothing to these two as they still remain the best of friends. In this picture, we can see P and Phoebe with Mama Plop. What a perfect cat family. Read on to find out more about them. 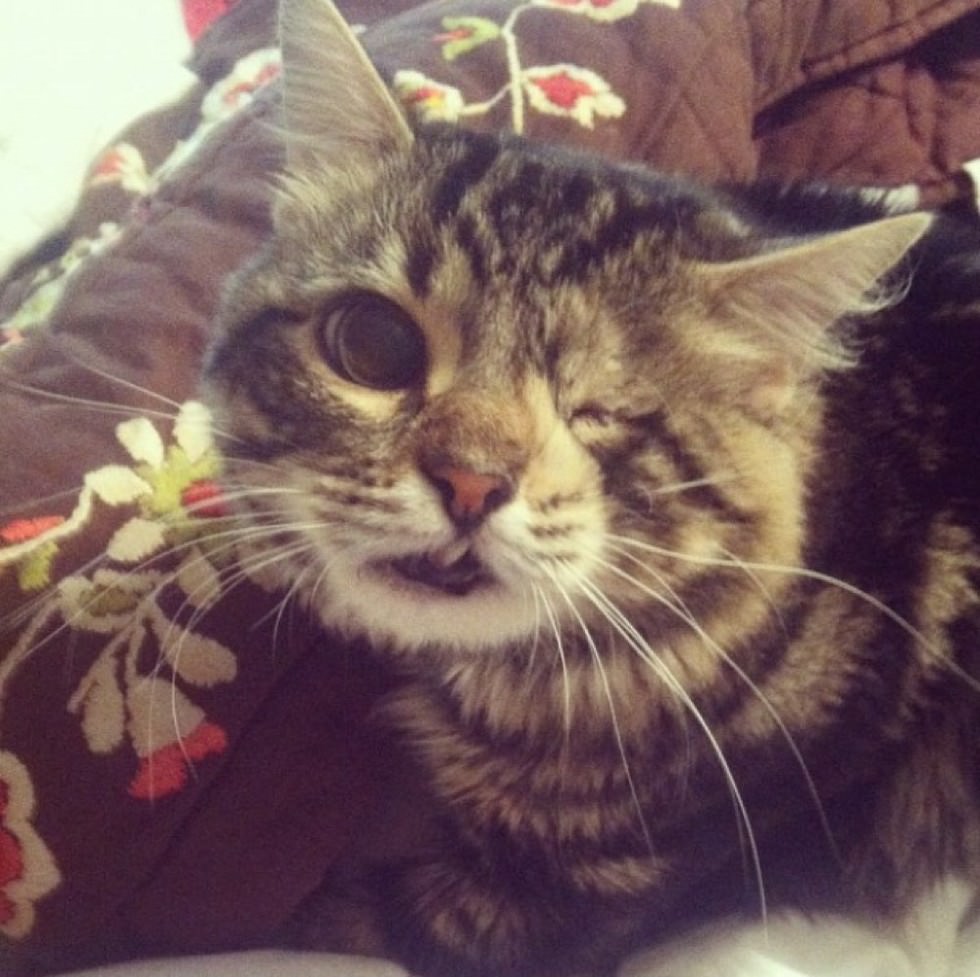 It wasn’t always easy, however. Alex says, “I remember almost a dozen people told me it wasn’t ‘worth it’ to keep P alive or see how she turned out.” He has a message for anyone else out there. Check it out on the next slide. 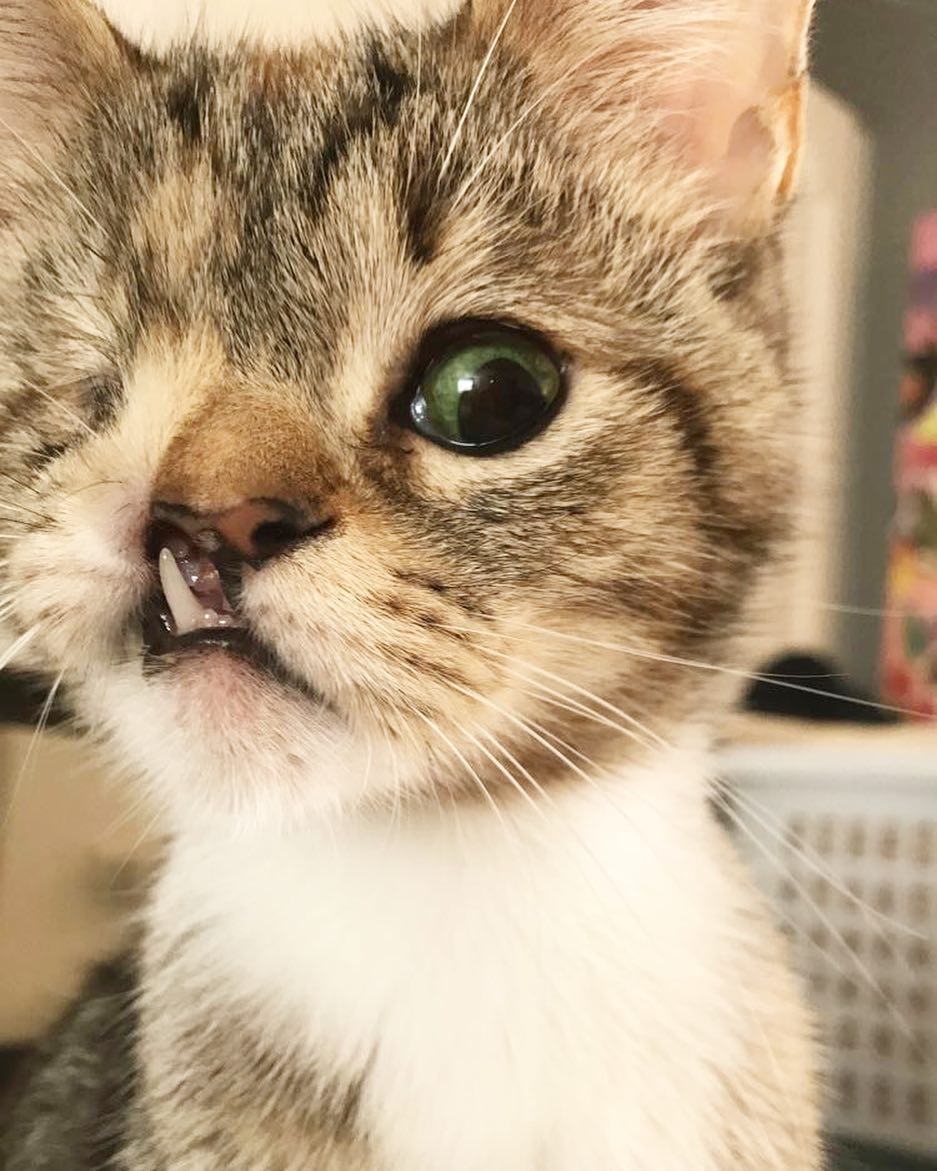 “A little compassion goes a long way because by giving P a chance I gained one of the biggest blessings in my life today.” Alex said. This is some amazing advice that can help us all be better people. Now let’s get back to P’s adventures. 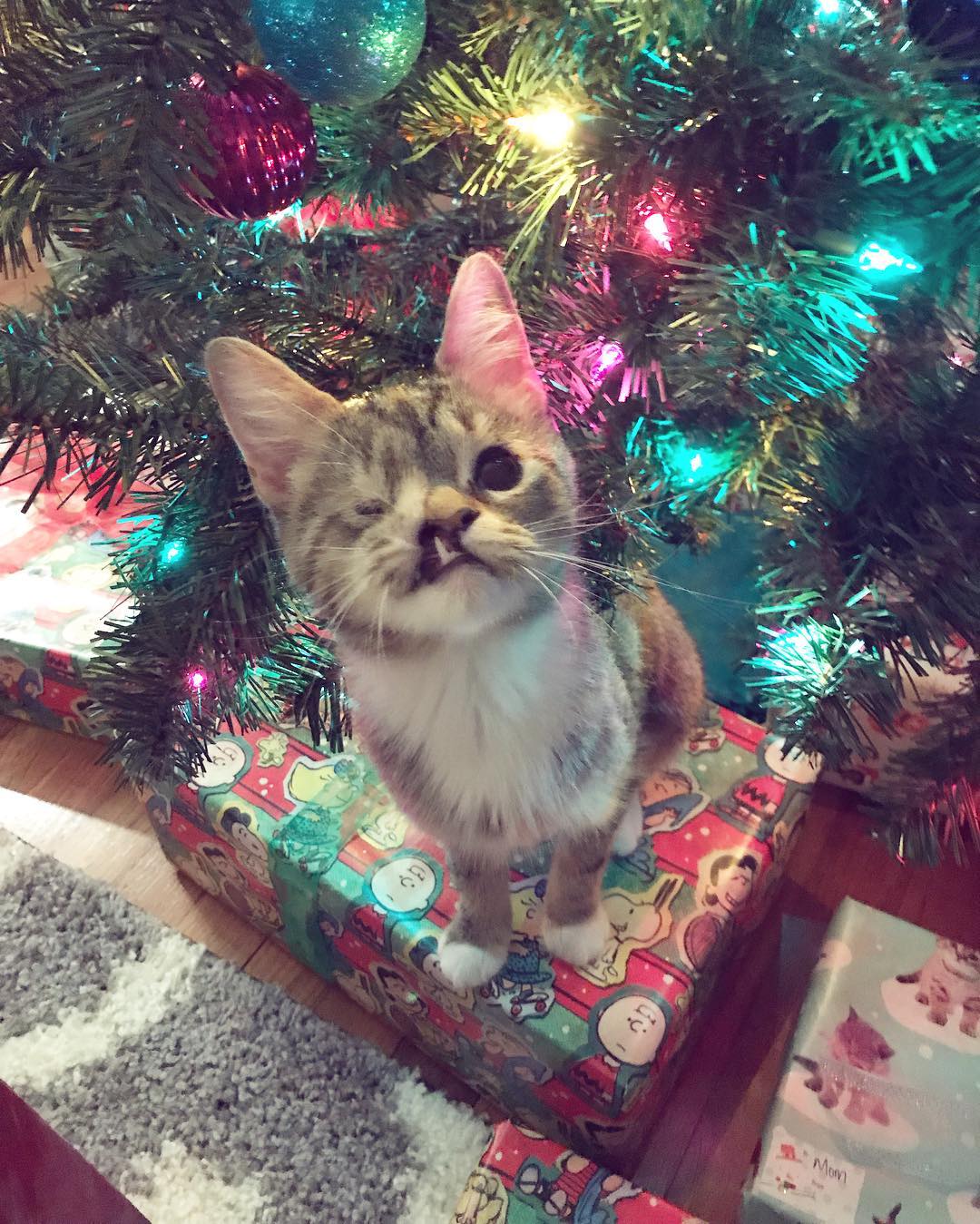 P absolutely loves Christmas time and getting new presents from her owners. She looks absolutely cute in this picture in front of the tree on top of one of her presents. Now let’s move on to another thing P likes. 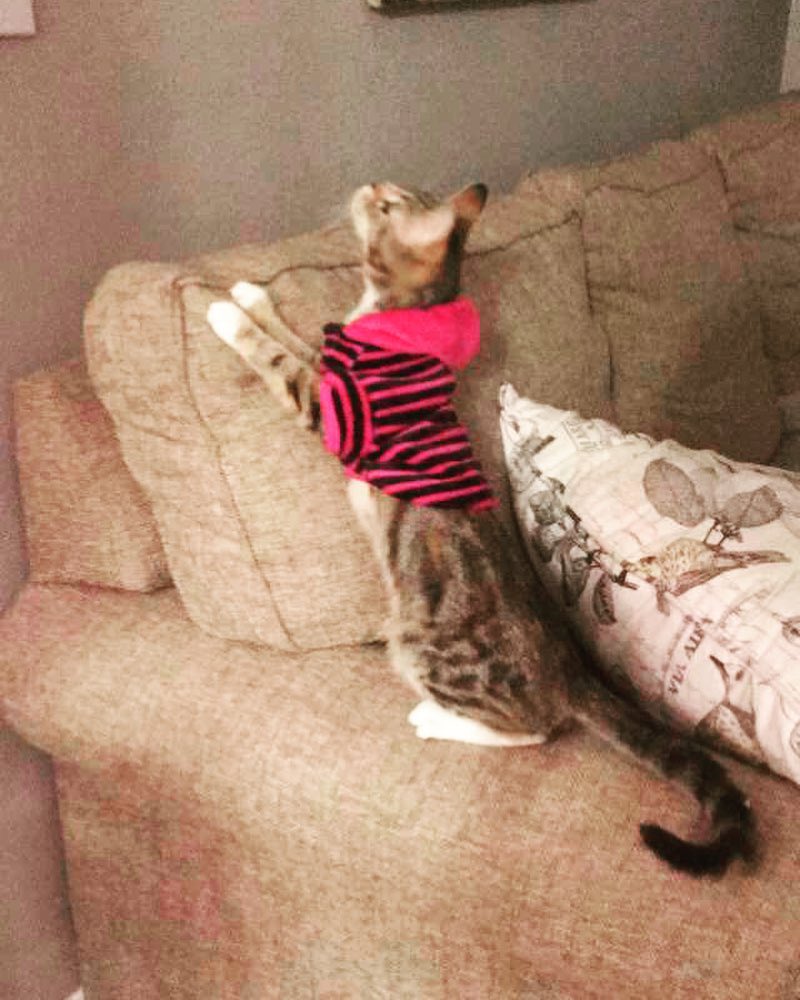 P loves her pink hoodie that she got back in November 2017. She has quickly fallen in love with it, and I think she looks quite stylish in it, don’t you? Now we look at another one of her favorite things. 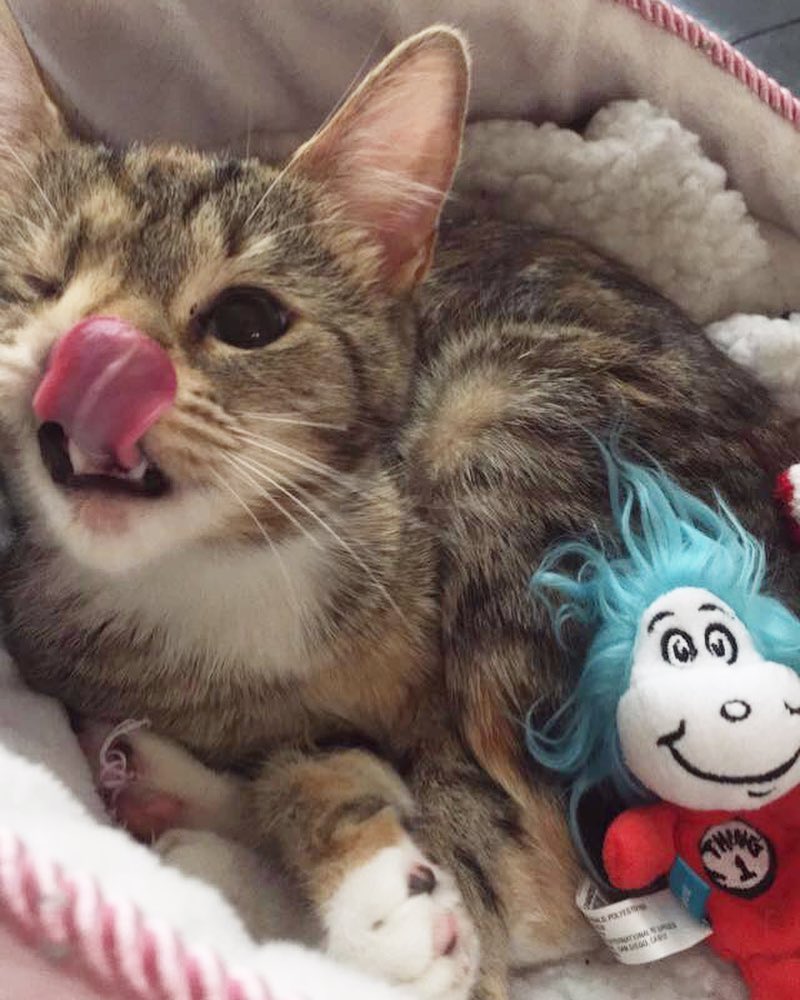 P absolutely loves her little stuffed toy and spends a whole lot of time with it. She’s a lot like a toddler, with her attachment to her stuffed toy. But she isn’t the only one with a stuffed toy, find out the other cat on the next slide. 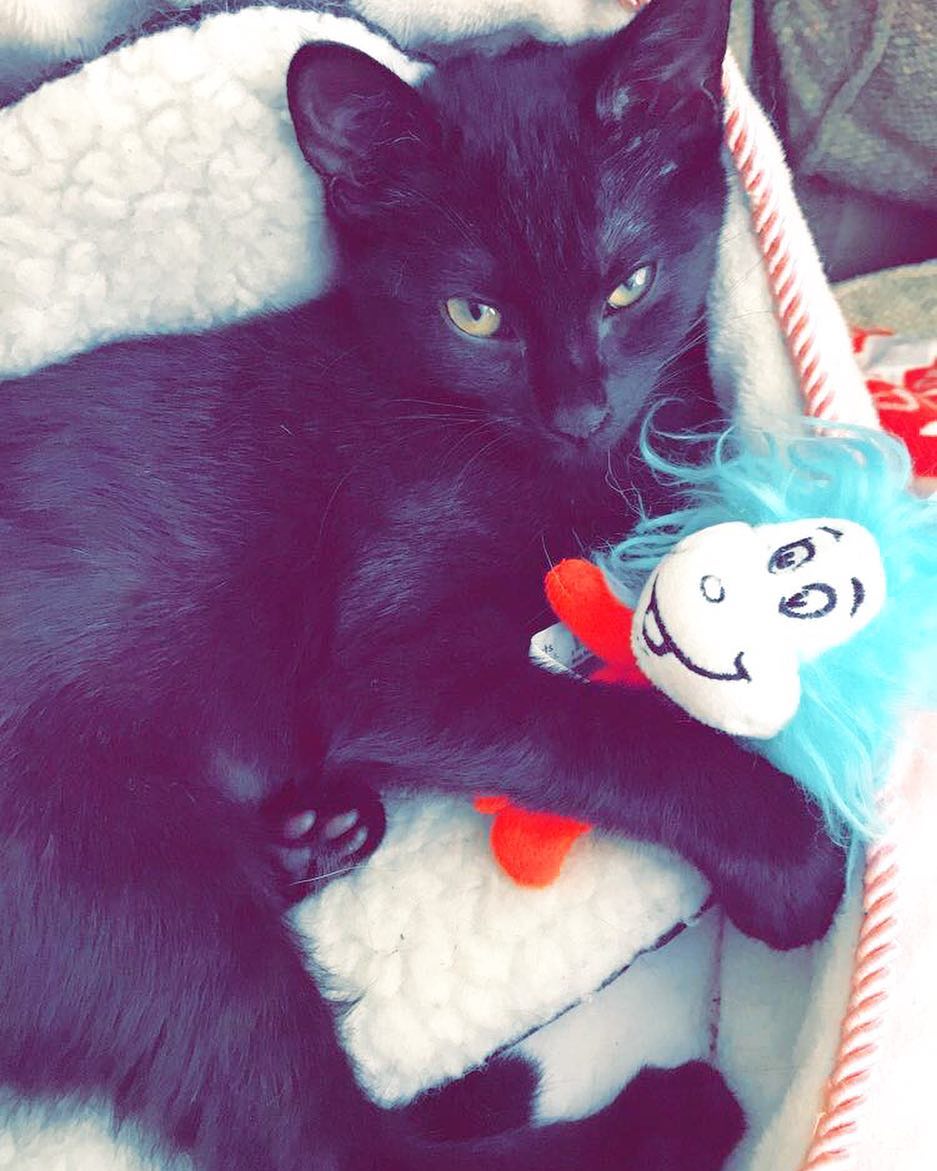 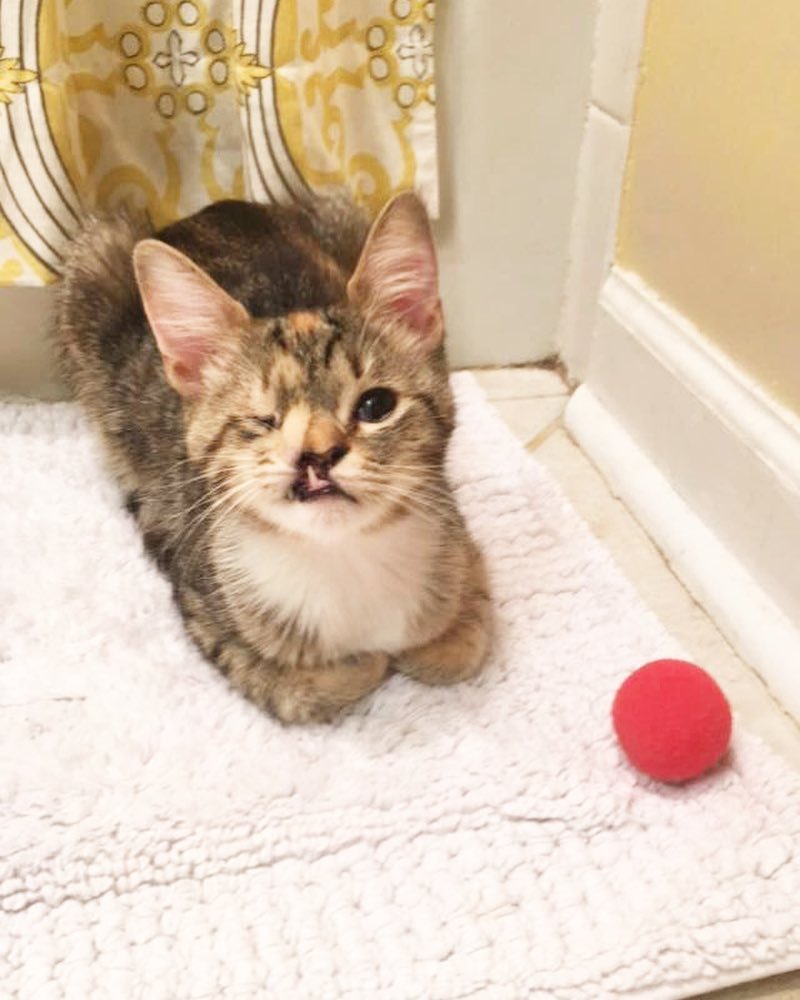