Diver Spots Two Whale Sharks Trapped Inside Fishing Nets, You Won’t Believe What He Does Next

Today we want to share with you an incredible story about how two whale sharks that were trapped inside a fishing net were freed. We don’t know how the two whale sharks managed to get tangled in the fishing net, but we do know that the whale sharks got lucky because divers Chris Rohner and Clare Pebble spotted them and came to help. 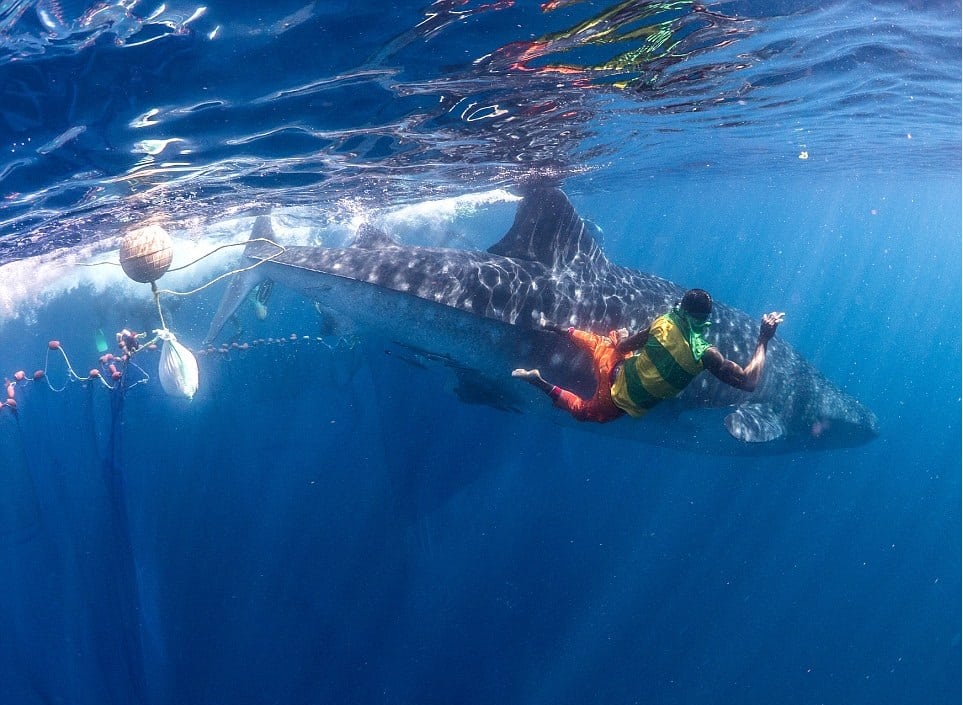 The two whale sharks somehow got stuck in the fishing net. One of the sharks was a full adult that measured at 8 meters long while the second shark measured at 5 meters. Their big size is what makes it impossible for them to get out of the net. 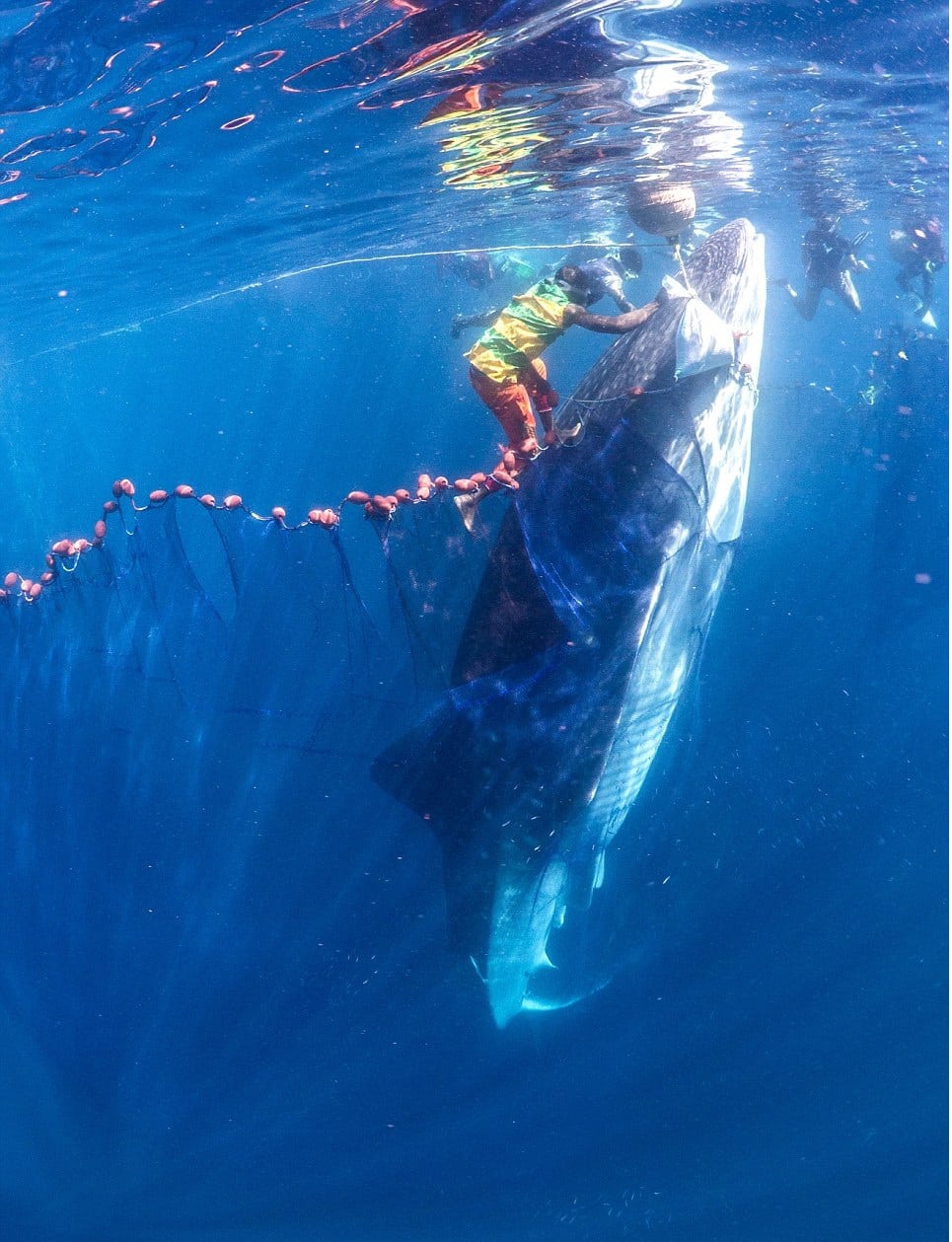 The poor whale sharks were stuck in the fishing net and they didn’t have any way of getting out. Luckily, the two divers saw that they were stuck and decided to give a helping hand. Let’s see how that worked out. 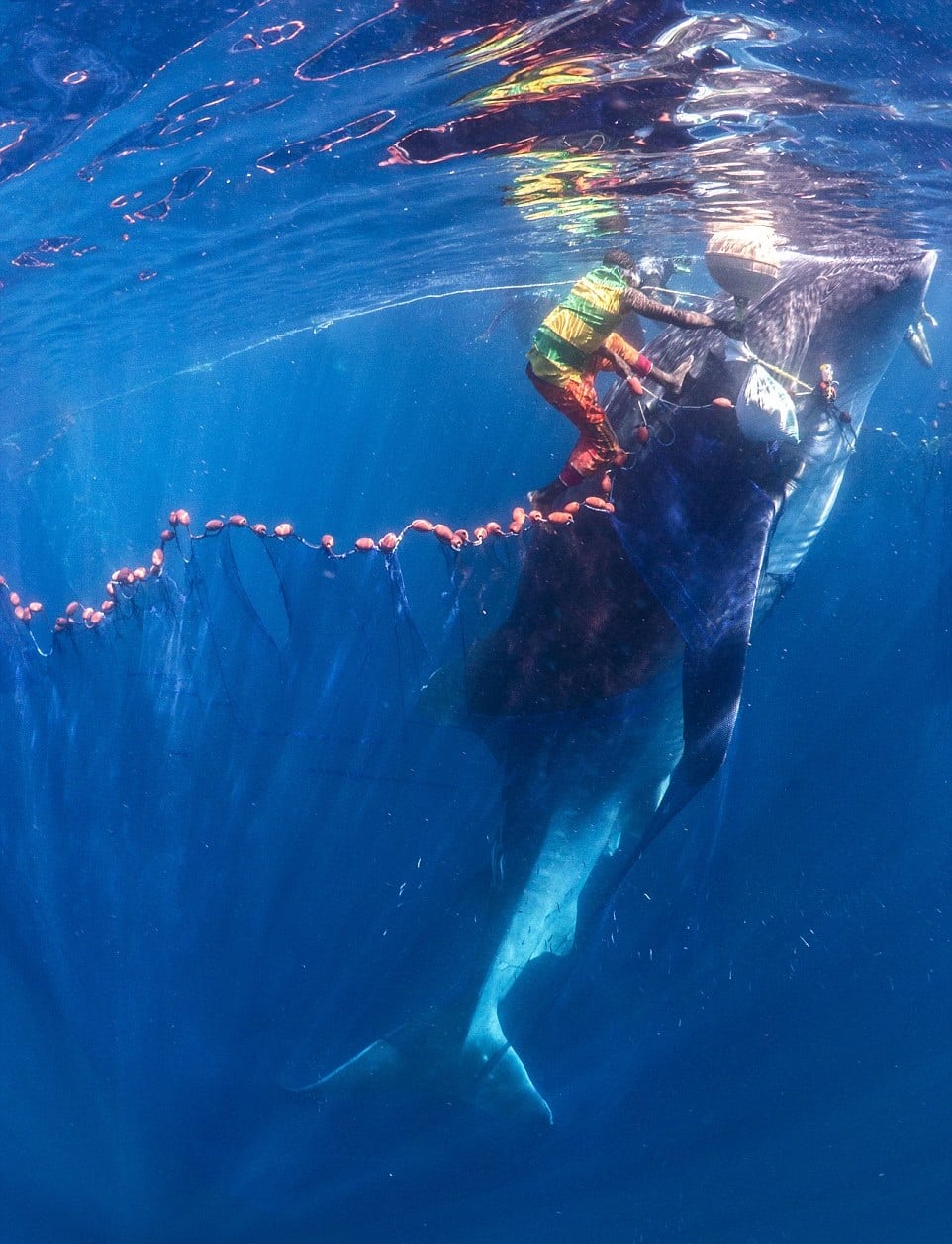 The divers were so brave that they even climbed on the shark’s back! Not many people would have the courage to get on the back of a whale shark, but it seems like Chris Rohner and Clare Prebble are not afraid. 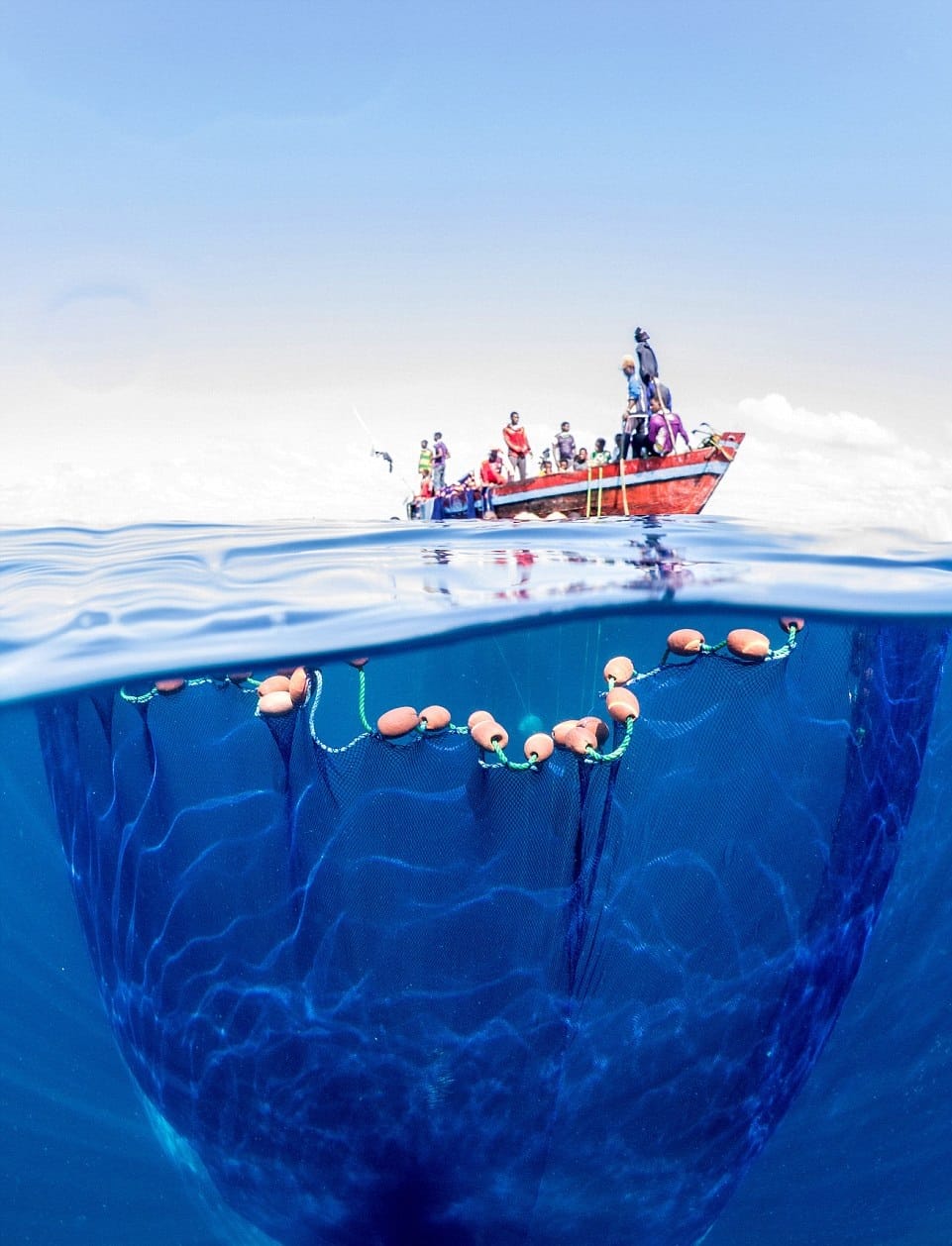 There are many reports which show that whale sharks get stuck in fishing nets quite often. As crazy as this might sound, there is a good reason why these animals get stuck like this. 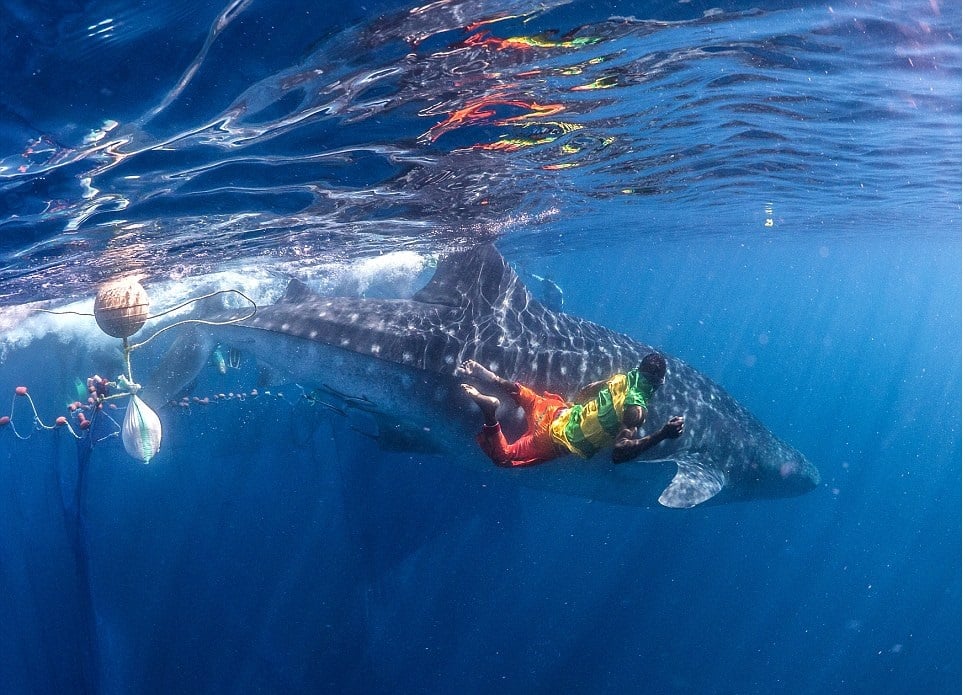 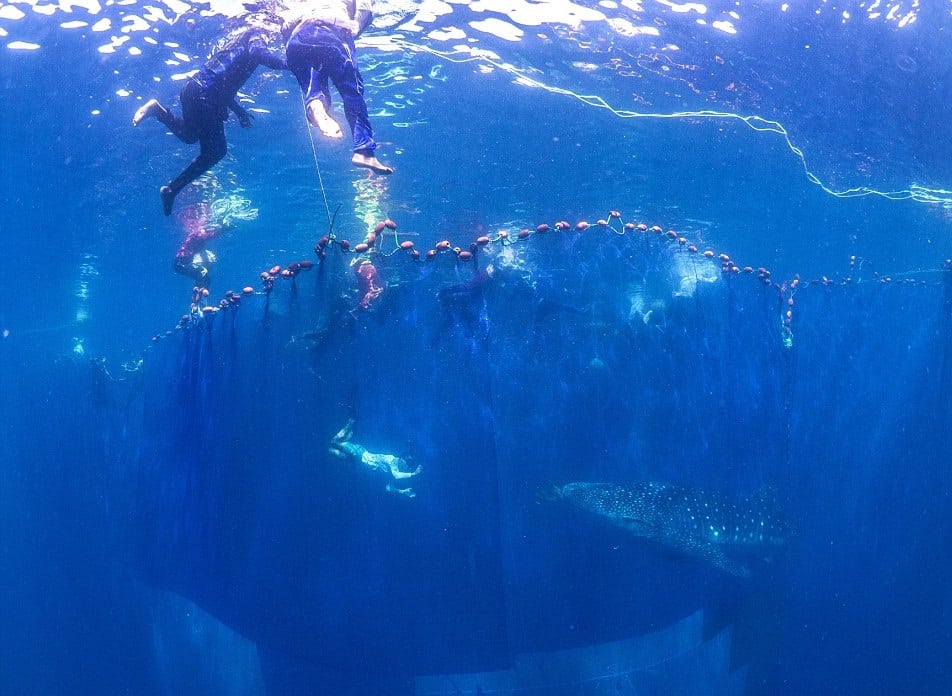 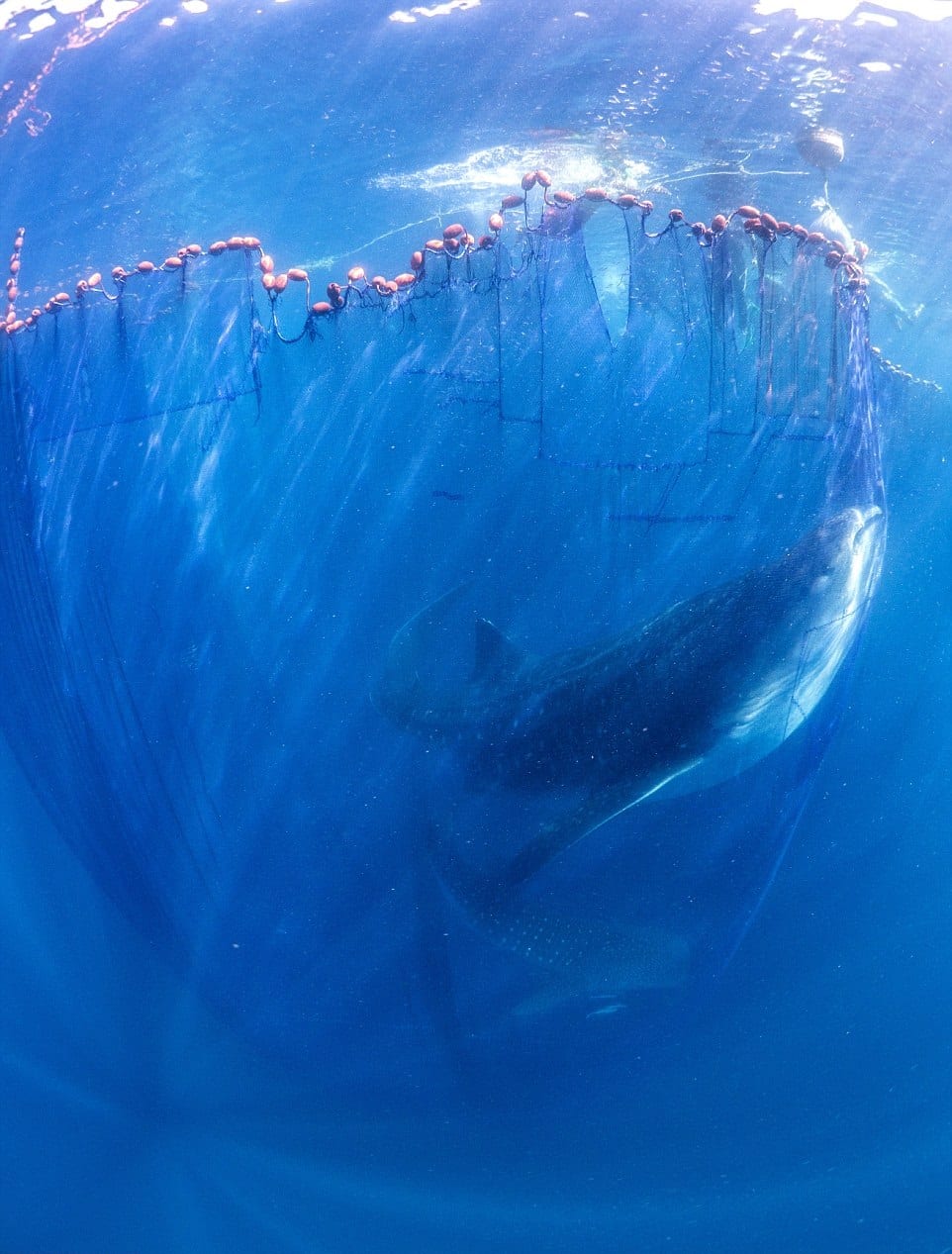 As we can clearly see, getting the two sharks out of the net is not going to be an easy job at all. Luckily, the divers are not the type of people to give up easily. After hours of pulling on the net, they were finally able to set the whale sharks free! 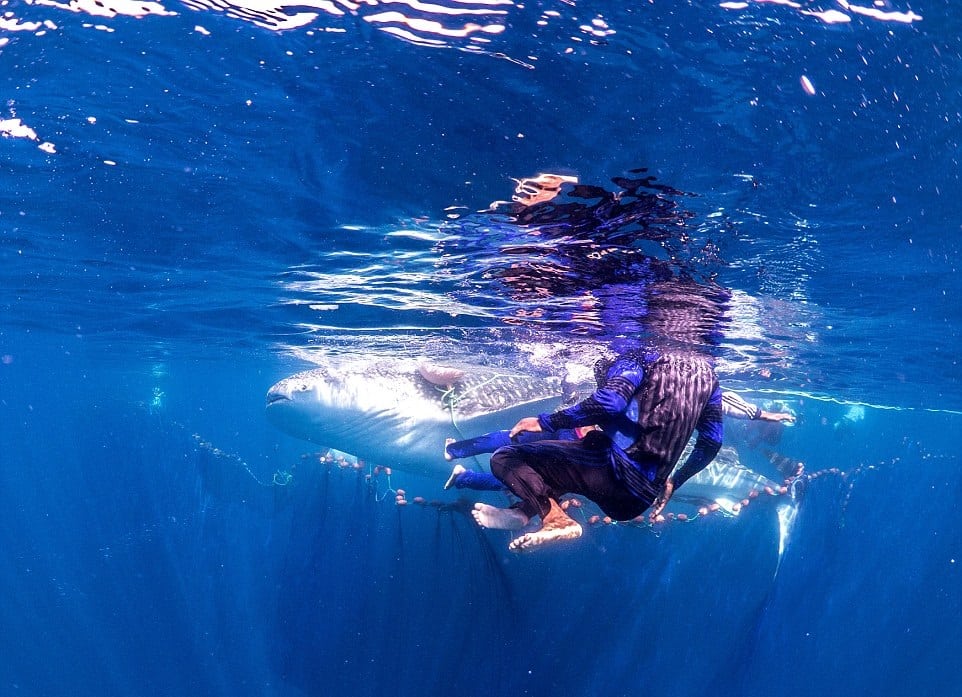 The divers were tired and exhausted, but they achieved their goal! After hours of hard work, the two whale sharks were finally free. You won’t believe how big the fishing net actually is… 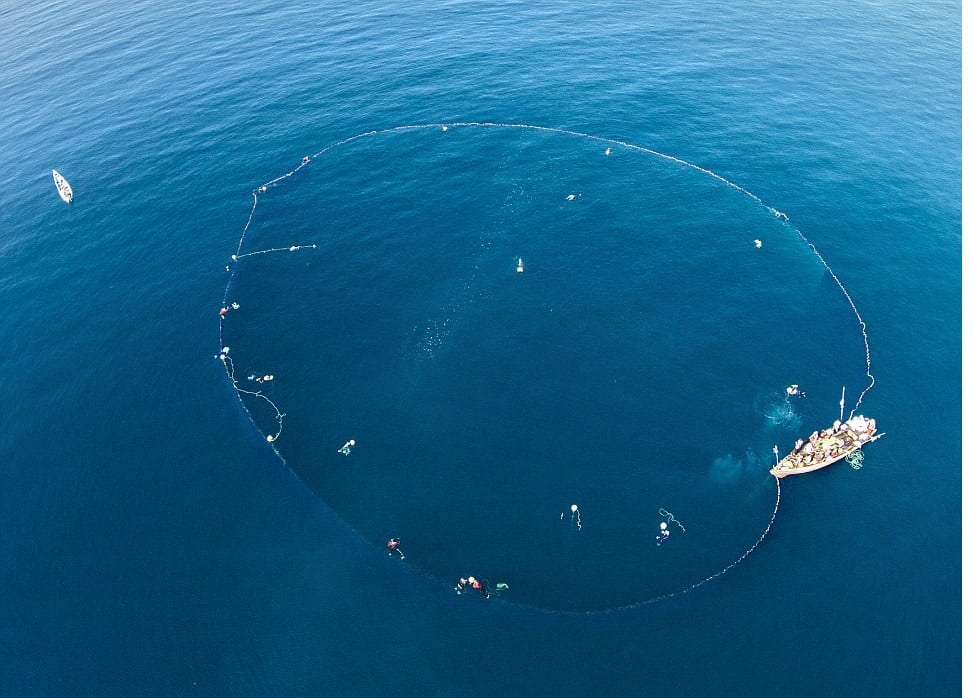 Just look at how small the boat looks in comparison to the fishing net. No wonder the whale sharks had no idea that they were swimming towards a trap and got stuck. 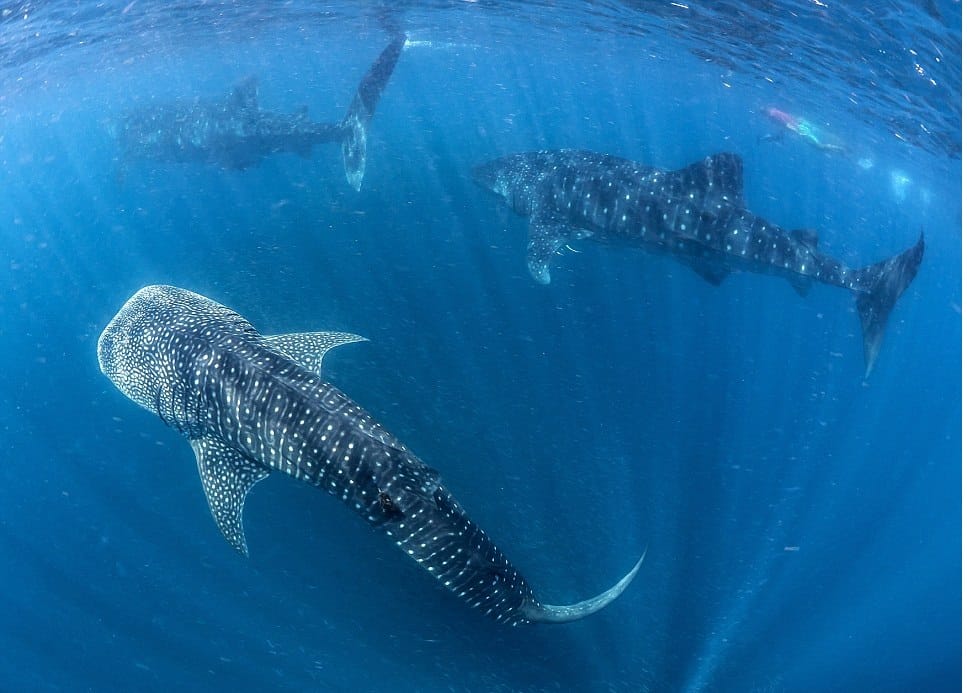 Truth be told, these whale sharks got lucky because they wouldn’t be able to get out of the fishing net all by themselves. Sadly, not all whale sharks share the same fortune. 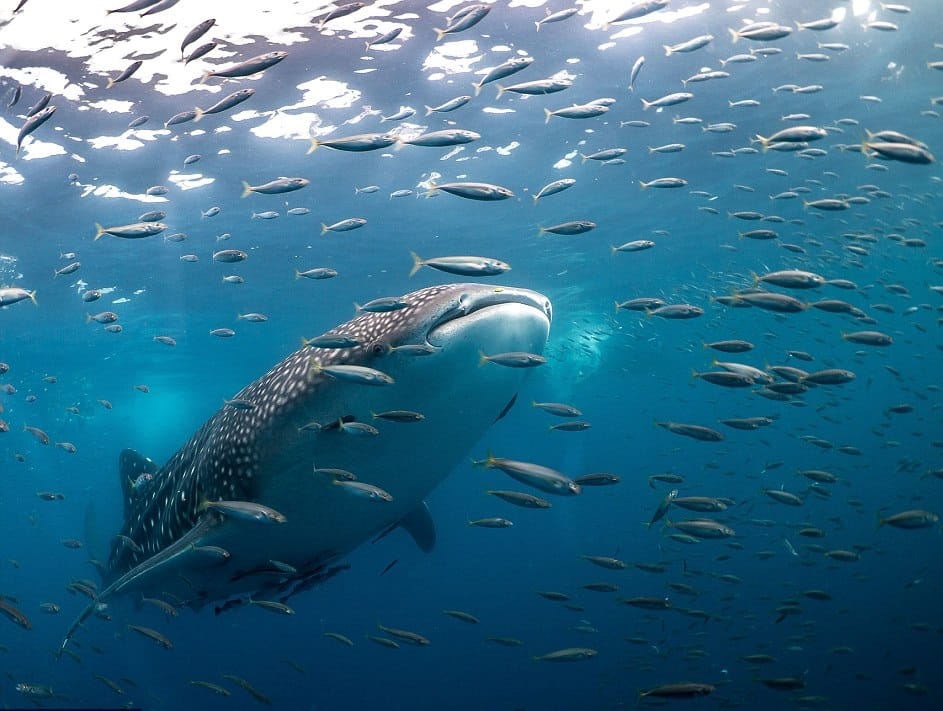 The whale sharks were set free and they could go and look for fish in other places. Nonetheless, this story reminds us of another whale shark that started cooperating with the diver who came to save him! You won’t believe how this next story plays along. 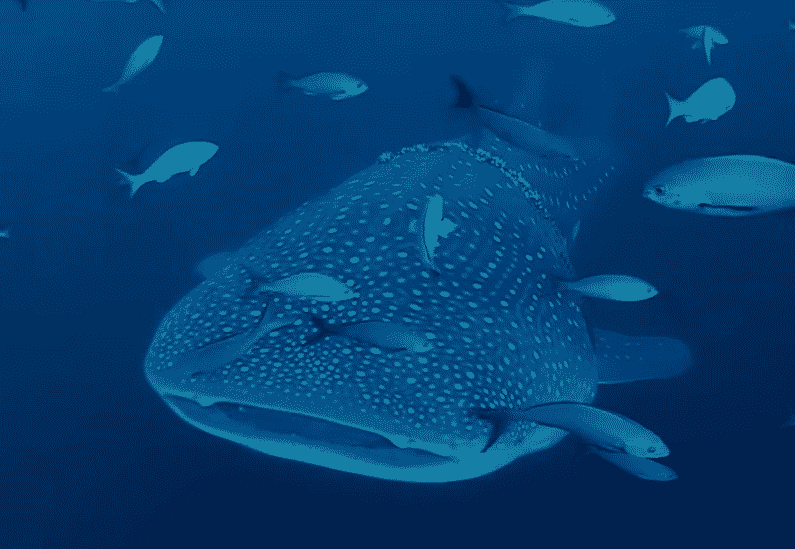 This story is a bit more heartbreaking than the first one because this fish was trapped in a rope. The rope was stuck on his body for a long time and it left its marks on him… You won’t believe how the animal looked like! 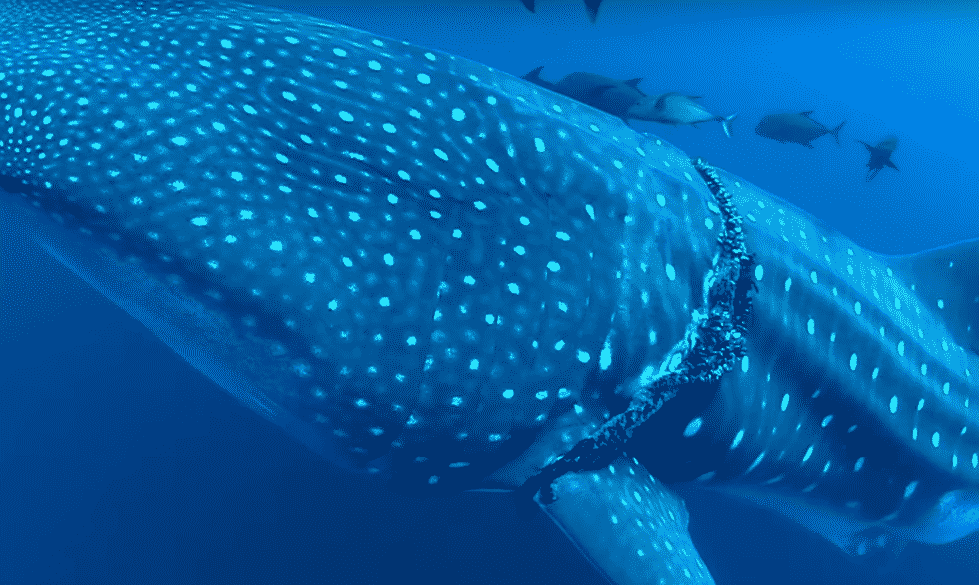 As we can clearly see, the whale shark’s body is surrounded by a rope. To make things even worse, the rope was tight around its fins which made it difficult for the whale to swim.

This picture clearly shows us that the rope cut into the whale shark’s skin. This was a terrific sight and the diver who found the whale shark knew that he had to do something about it. 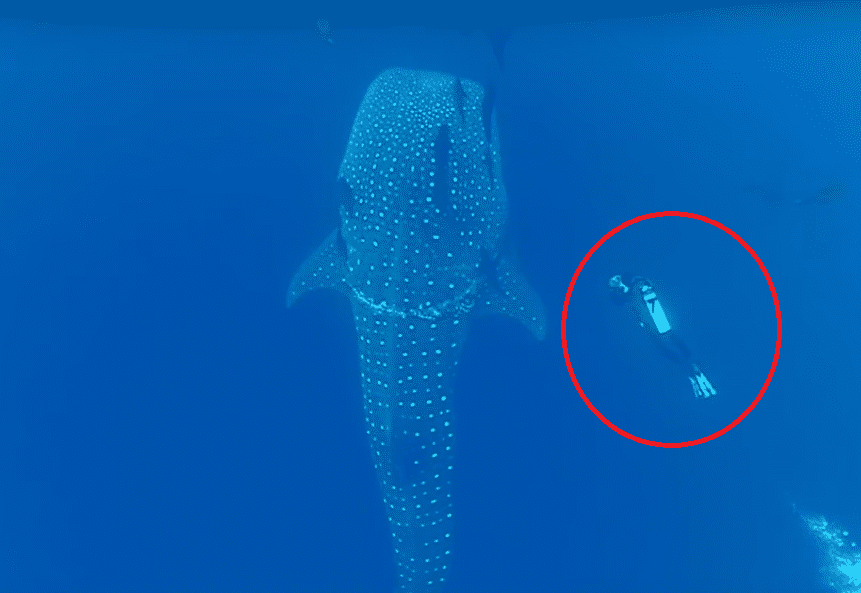 Without giving it any second thought, the diver knew that he needed to help the whale shark and he got closer. What he did next will amaze you! 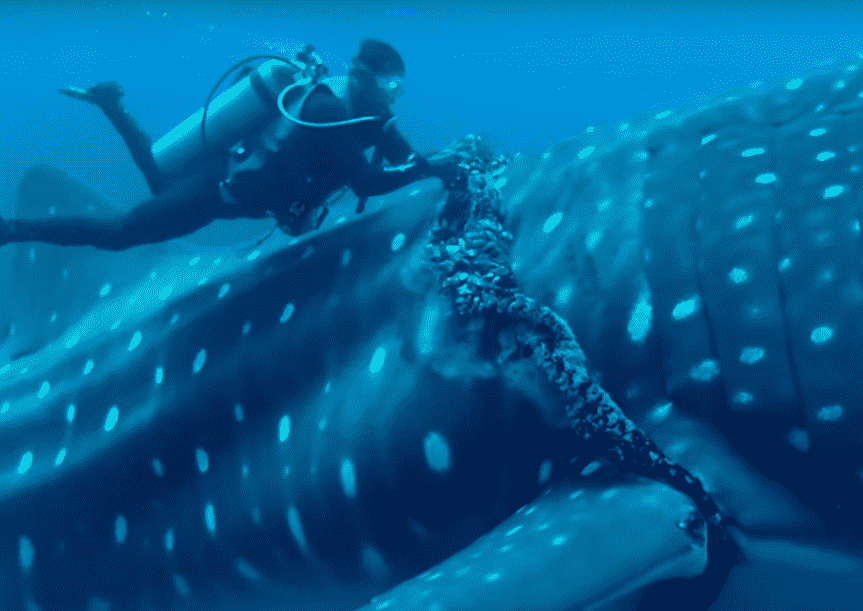 Even though the whale shark is an underwater goliath, the diver still got on its back and started cutting the rope. You won’t believe how the fish reacted to this!

4. The Whale Shark Is Cooperating

To everyone’s surprise, the whale shark realized that he was getting help from the diver and started cooperating. Let’s see how this risky move worked out. 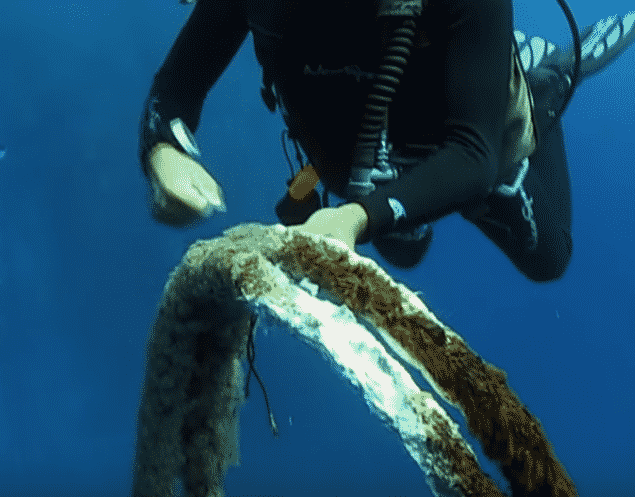 After a spending a couple of minutes on cutting the rope, it was finally off! The next picture will show you what tool the diver used to cut the rope. 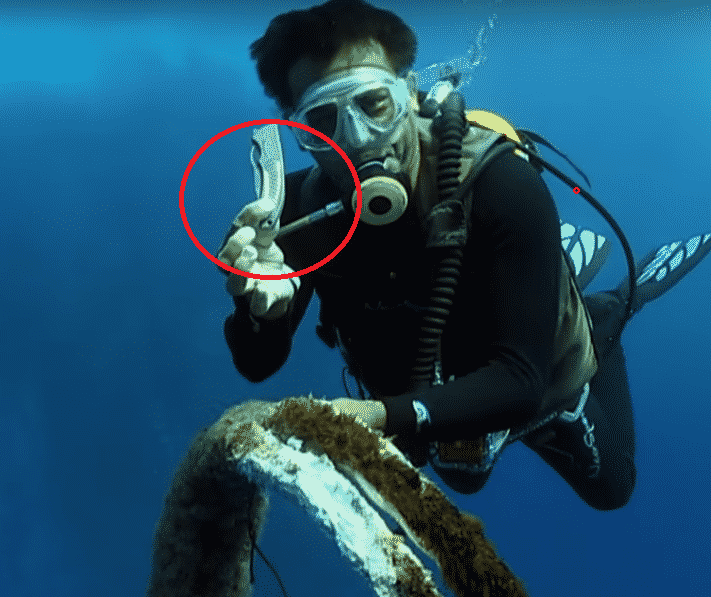 Luckily, the diver had a sharp switch knife on him when the whale shark came around. This knife is what helped him free the underwater goliath. Nonetheless, the diver took a risk and it paid off. 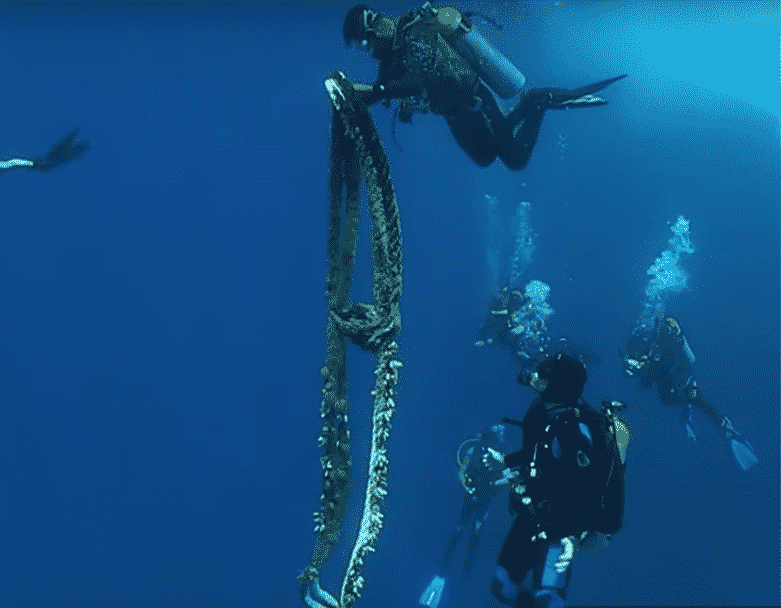 After spending a couple of minutes next to the divers who saved his life, the whale shark took off. The divers were proud of their action and this picture shows us how big the rope actually was.