These Pets Never Looked So Guilty

If there’s one advice that I can give to new pet owners is to never leave food on the counter because it’s going to magically “disappear”! Dogs are a man’s best friends, but sometimes they can stick their noses where they shouldn’t. However, it’s impossible to stay mad at them when their guilty faces are so cute. #16 and #10 are our favorites!

20. Chilling in the Fridge 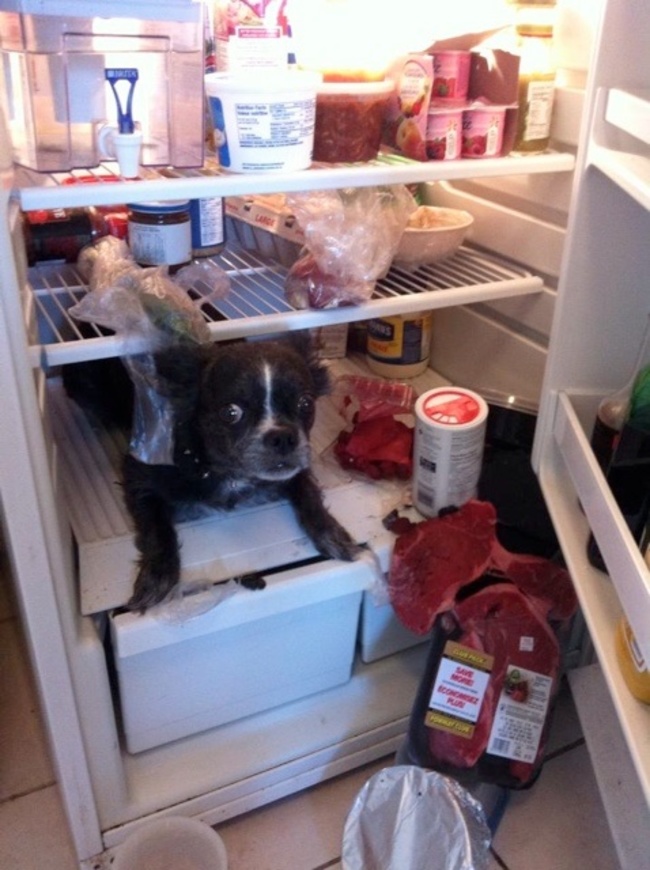 It looks he was just trying to cool off during a hot summer day. However, the open meat package shows that this good boy was also looking for a snack. Guess the family is not eating barbecue tonight. Just look at the bright side of things, at least he isn’t trying to lie about it! 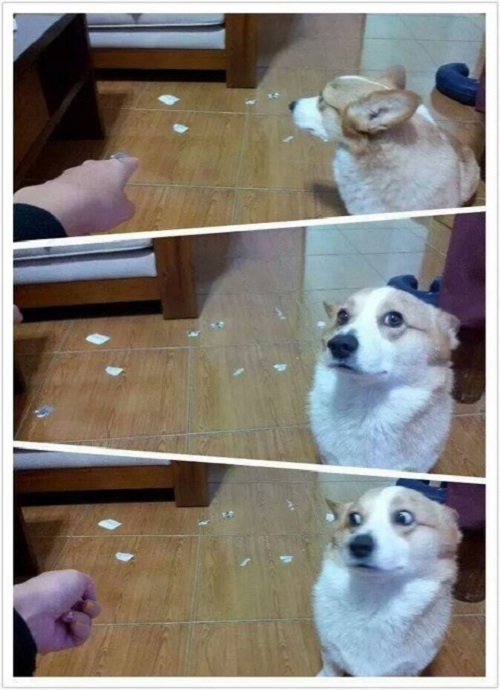 If there’s one thing I know about dogs it has to be that they would be really bad poker players! This dog tried to bluff in the first picture, but he couldn’t resist the guilt. However, some dogs try to be masterminds and blame their mess on others, as this next puppy did! 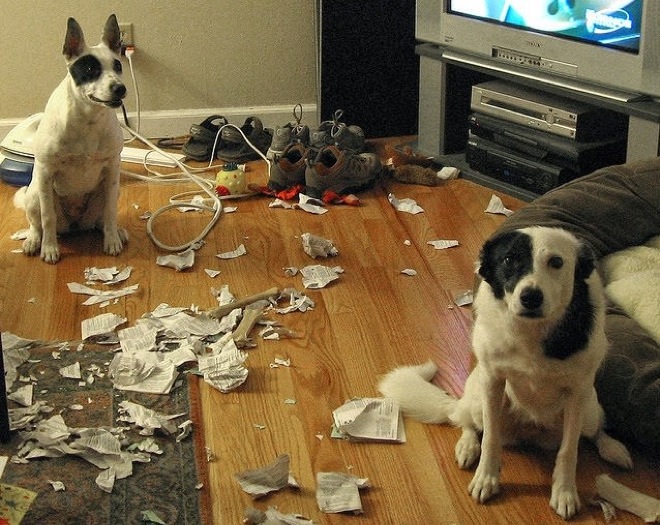 I just love how guilty the first dog looks while the one in the background seems to be judging him. Although, I have a feeling that both of them share the blame in this mess but can you really stay mad at them when they are so cute? I think not.

The next doggo has a face that will melt your heart! 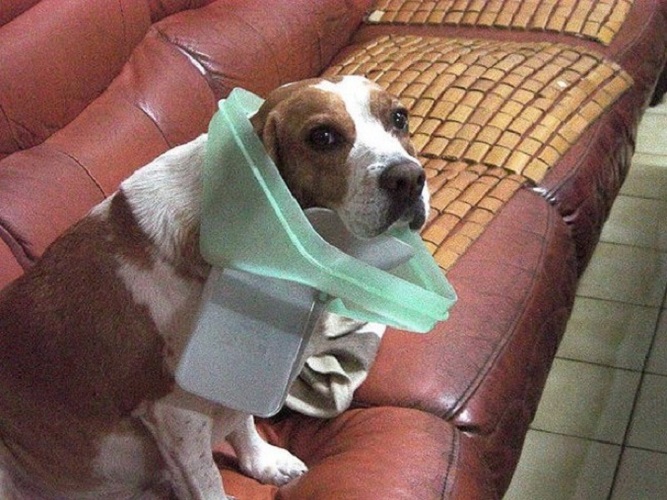 Can you imagine how hilarious it would be to find the thrash spread all throughout the living room and then seeing your dog with the lid stuck on his head like this? There’s no way someone can get mad at this good boy, especially with that guilty look of his. Things get even more funnier when a cat is involved! 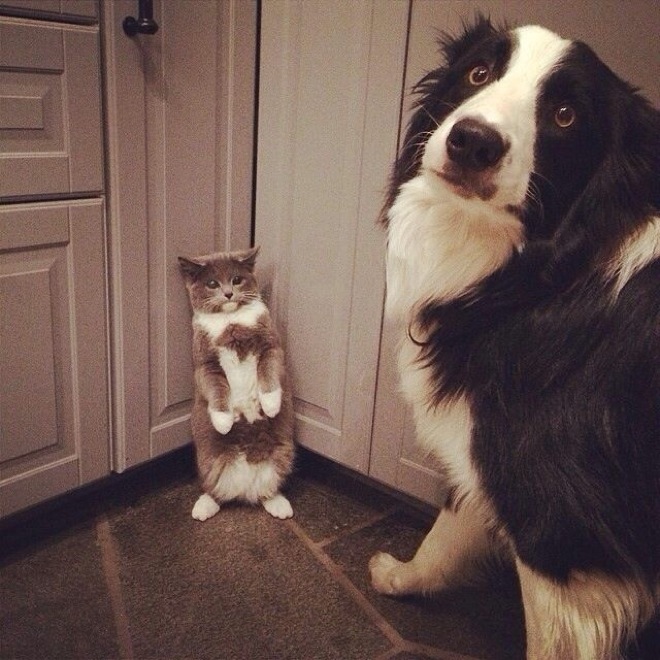 It seems like this dog was just explaining the rules to his roommate the cat, but it didn’t like what she was hearing. Although, we can be sure the cat didn’t need any help because she was surely plotting something. Just look at that smug face of hers! Stick around if you want to see the cutest dog picture yet! 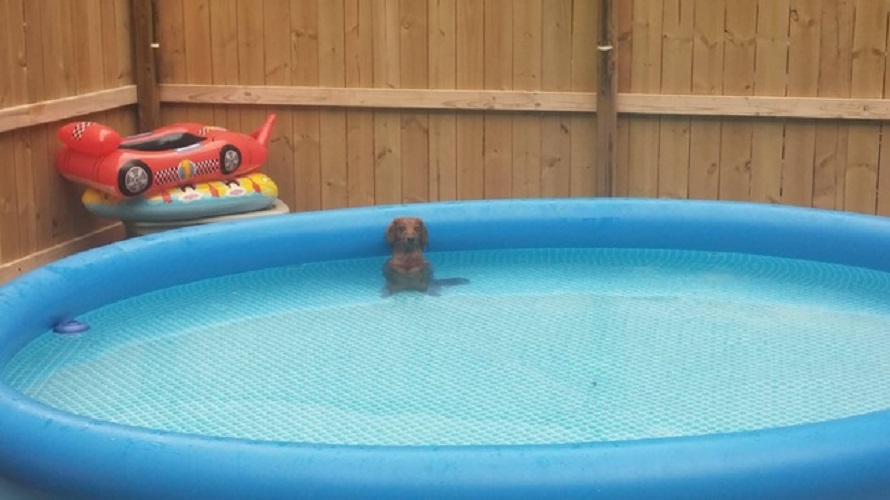 What better way to cool yourself during hot days other than to jump in the pool? This dog knows what’s up. All he needs is a cocktail in his right paw and this would look like a vacation picture. 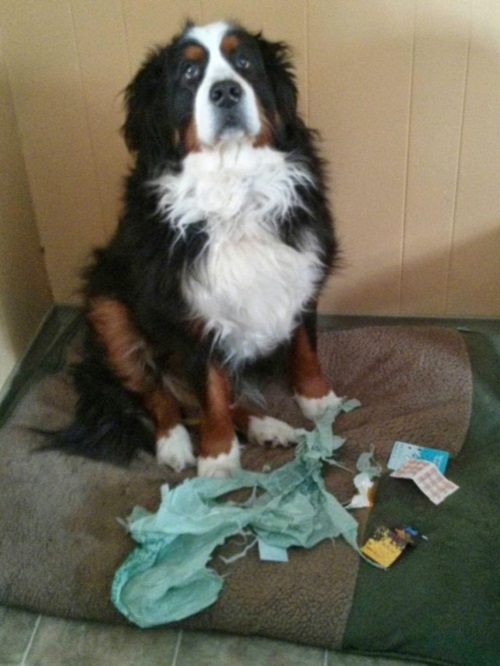 I love how the dog looks like he is saying “Wonder who made this mess?”, but the evidence is right there. The next dog made an even bigger mess! 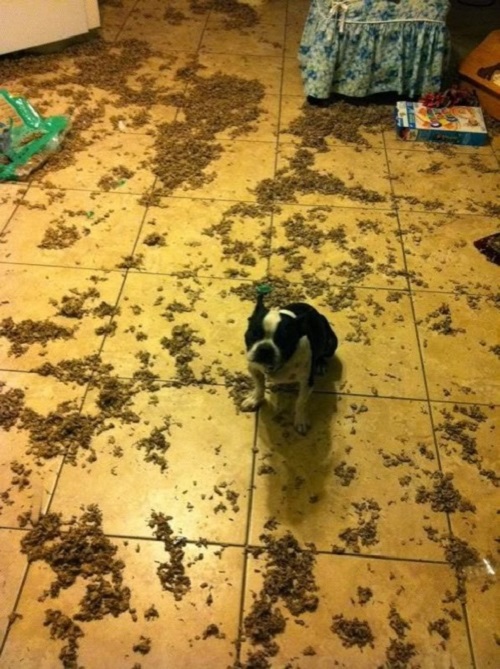 Nothing can get in the way of a cute puppy and his delicious food, not even safe packaging. Even though cleaning this kitchen might take a while, no one can stay mad at this little guy when he looks so darn cute. Talking about making a mess, you won’t believe how funny this next dog looks! 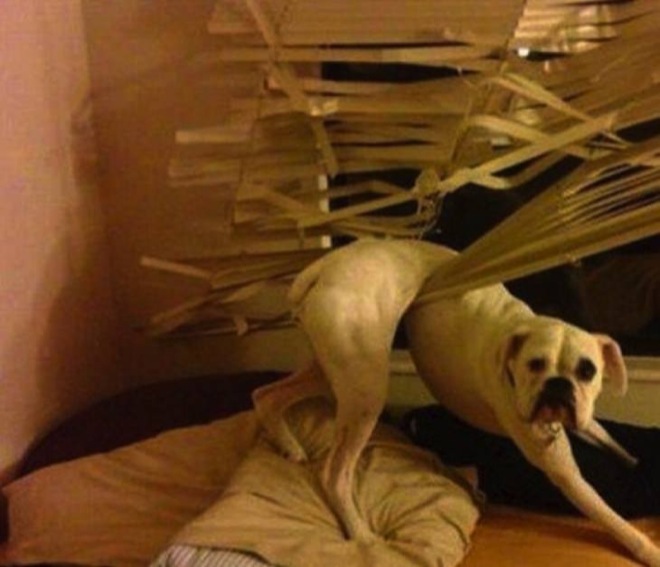 For some unknown reason, dogs are always fighting with furniture and it seems like the furniture won this battle. Poor dog, not only did he get caught in the act but he is also stuck! The upcoming picture will show you the one thing that dogs prize the most, comfort! 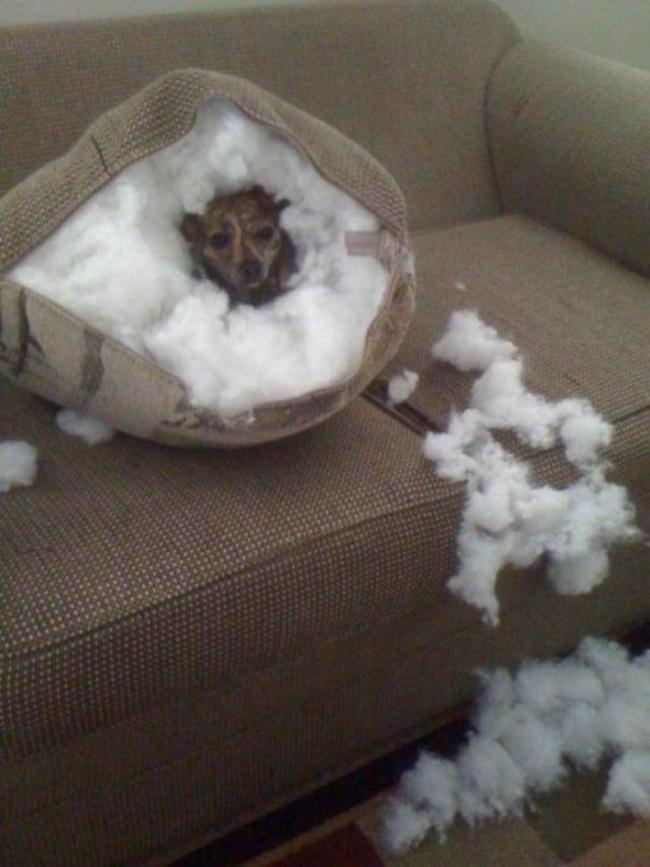 The best thing about this picture is not that the pillow is ruined, but that smug look on the dog’s face that basically says: “I regret nothing”. Stick around to find which are the signs that show your dog is feeling guilty. 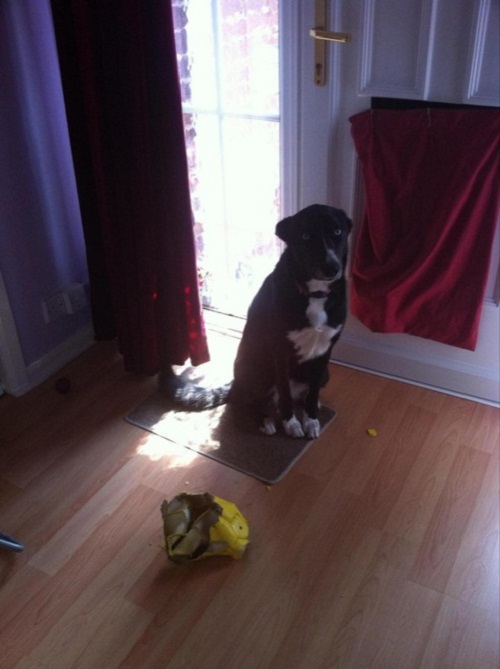 As you can clearly see, the evidence that this dog did something bad is right in front of him. Although, his shy position and back ears make it clear who the culprit is! But then again, who can be mad at dogs when they look so cute? 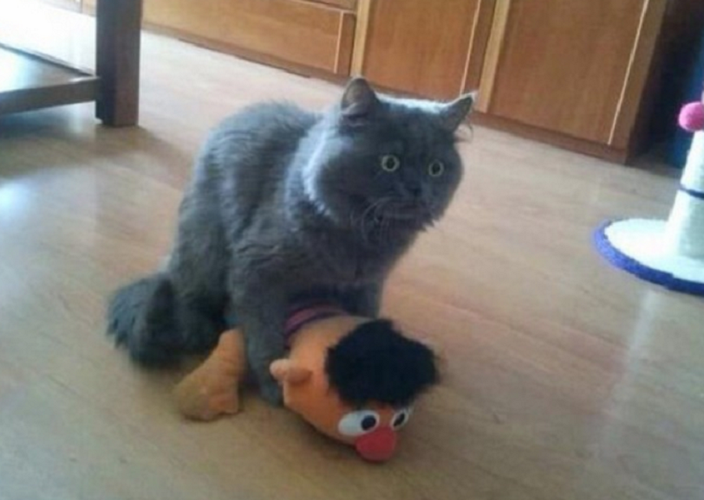 Mister Whiskers!! What are you doing to Elmo? The cat’s face is hilarious, but what’s even more funny is that he didn’t get off Elmo even after being caught in the act. 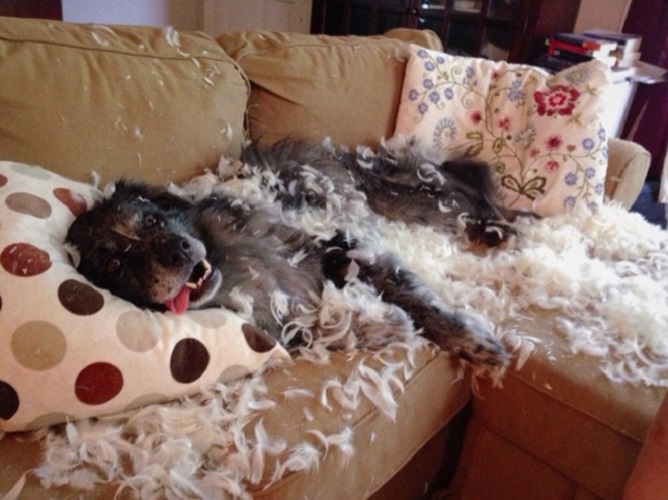 From what I can tell, it seems like dogs love to destroy pillows. They love this so much that they don’t even try to hide away the evidence or look guilty about it! This dog had too much fun destroying the pillow to care about what his owner thinks of it. 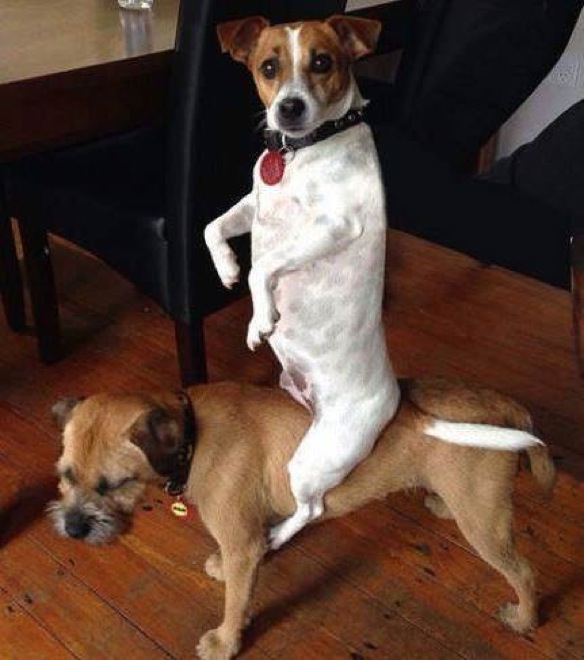 Is this the kind of stuff dogs do when they are left alone? If the answer is yes, then I am going to install some hidden cameras and see what other shenanigans they are up to. 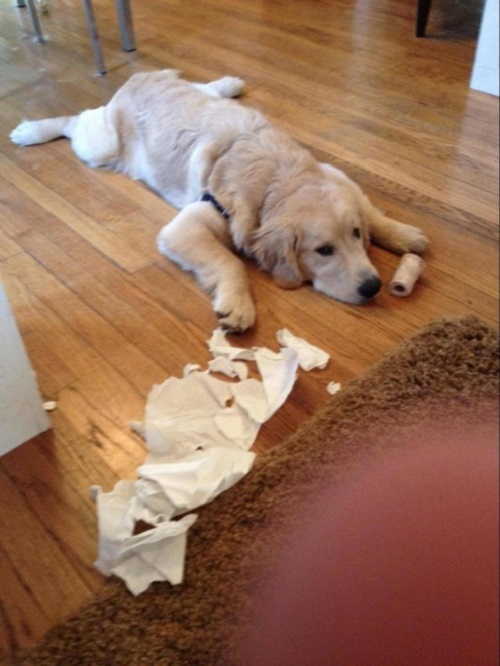 I bet that this dog was just trying to blend in with the floor so that his owner wouldn’t notice who made all this mess. Sadly, his scheme didn’t work out… The next doggo on our list is hilarious! 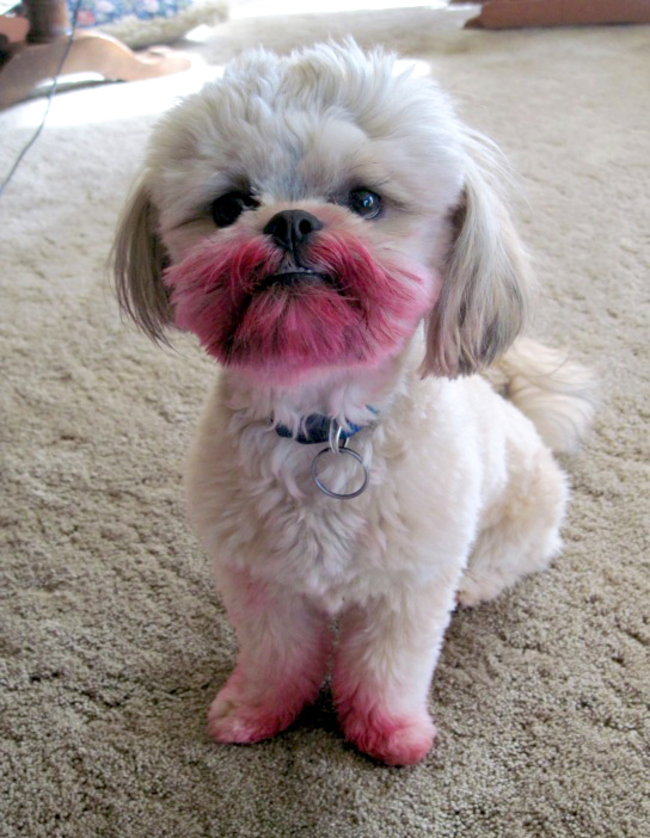 In case you can’t find your lipstick, then you might need to check your dogs mouth. Although, this puppy looks like a killer with all that red around his mouth. I wouldn’t want to mess with him. 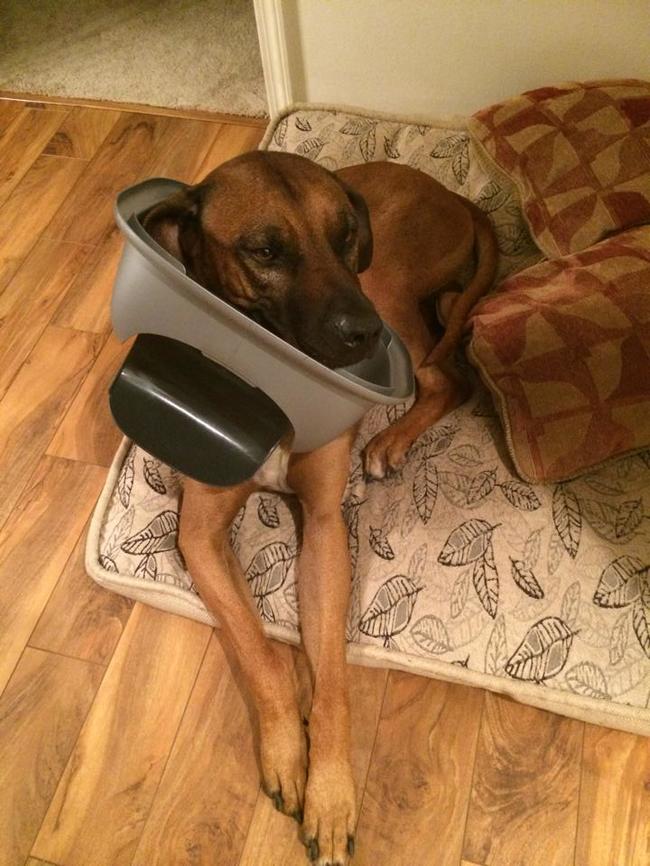 The go-to strategy for getting out of punishments that dogs use is to simply look away. This guy seems to think that the owner is just going to overlook the fact that there’s a lid stuck on his head. 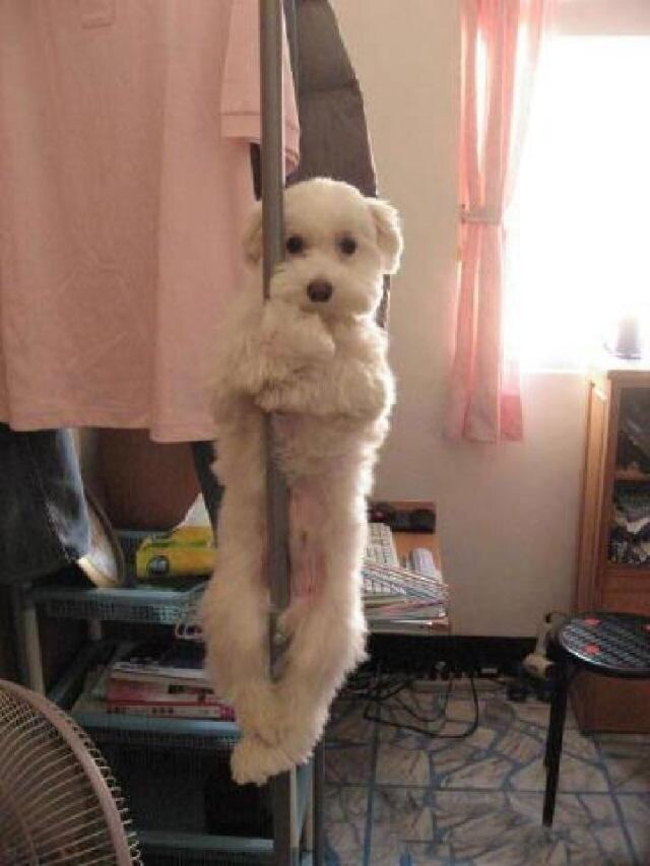 This is why you should never come home early. You never know what you might find! Prepare to laugh because the following picture is downright hilarious! 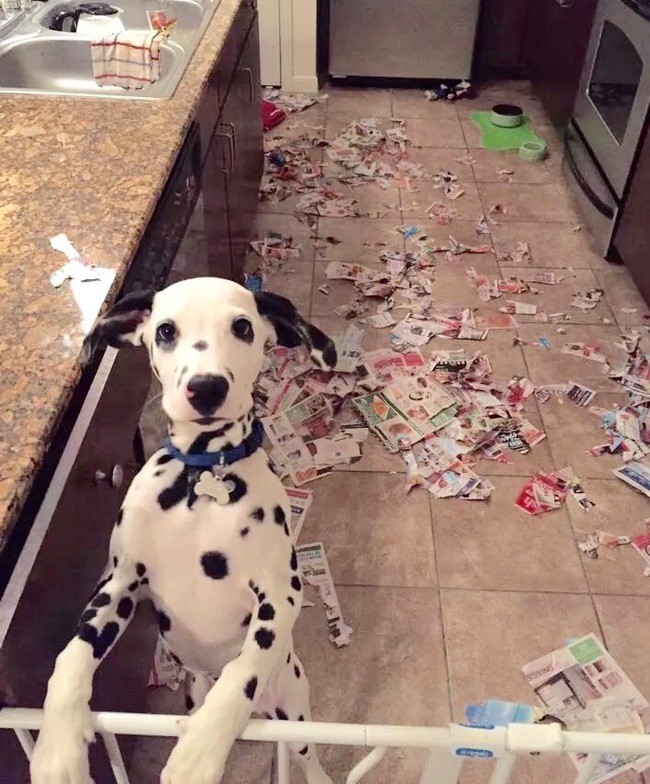 That moment when you wake in the morning ready to drink your coffee and read the latest news but your dalmatian had a different idea about how your morning should go. The innocent look on his face make this picture so much better. 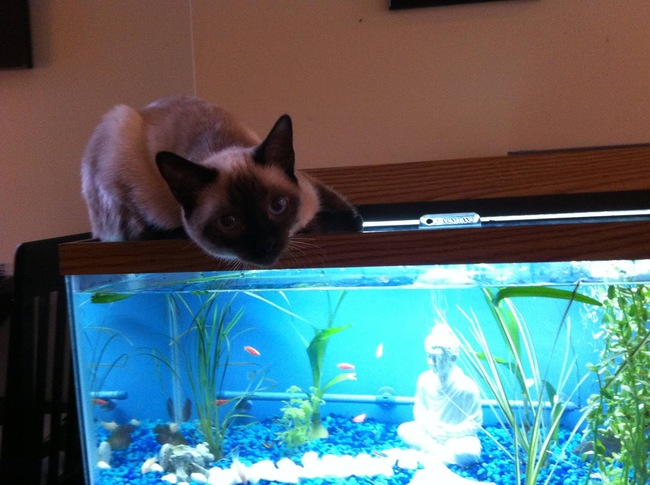 Was this cute cat just cooling off her paws? Or was she actually looking for something to eat? Judging by its guilty face, the second statement is probably true.