Getting close to wild animals is an amazing experience. But there’s nothing compared to what these tourists have seen in San Ignacio Lagoon. They went to Baja California, Mexico to touch giant gray whales. And when they saw the little calves, everyone’s hearts melted. The mother whale even shared her babies with the tourists! Fortunately, among the tourists, there was a wildlife photographer that caught these magnificent creatures on camera.

Here are some of the amazing photographs of a mother whale and her calves. 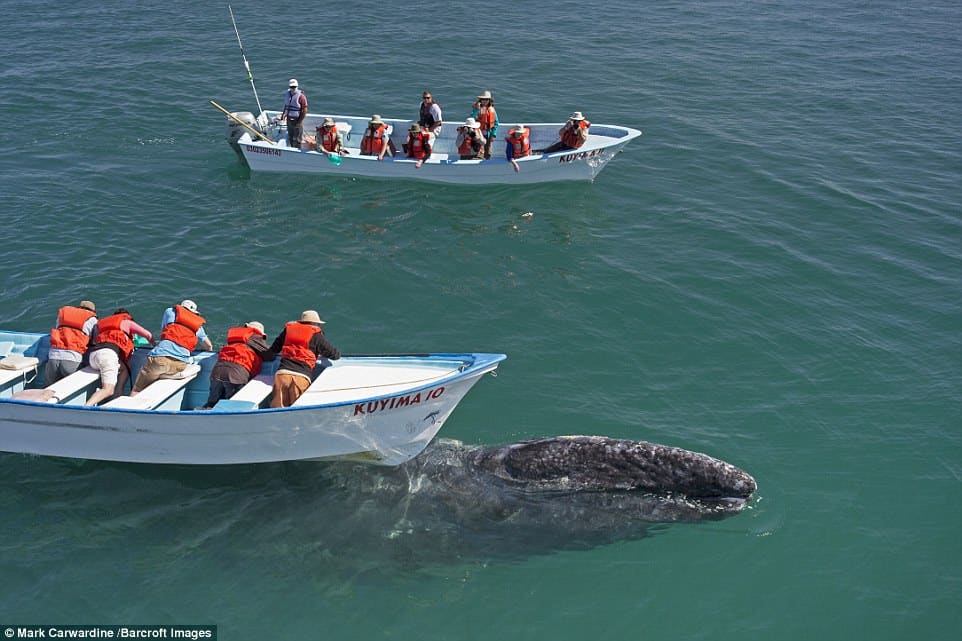 This is one of the four places where grey whales come to play and mate. But they are also willing to meet and socialize with people. Whales can grow up to 50ft long and weigh 40 tons! And when tourists saw them, this happened… 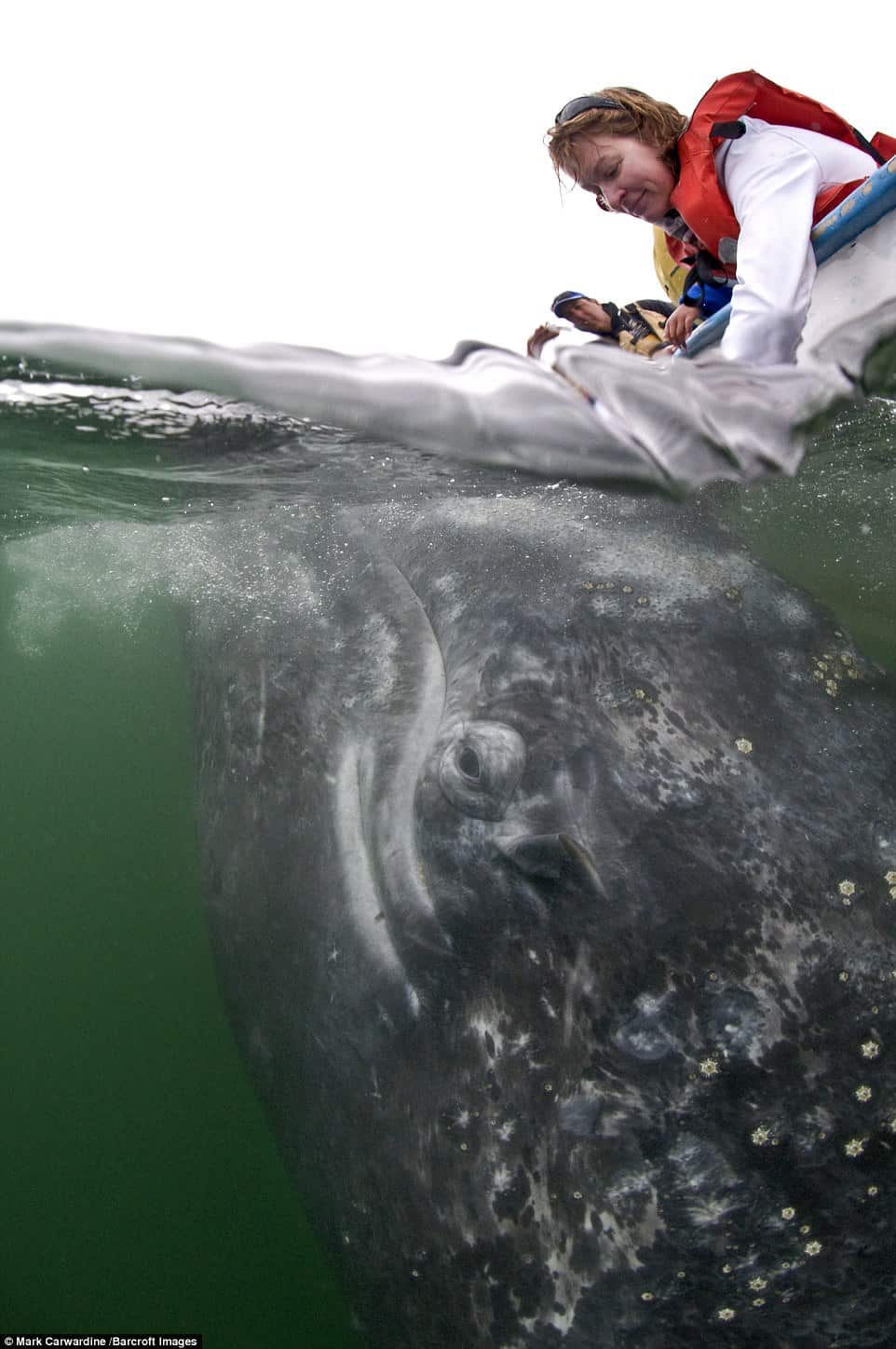 Out of hundreds of whales that chose the beautiful coastal lagoons in Mexico, a mother whale came to the surface to say hi to their visitors. She was happy to stay for a little chat and then she also brought them a little surprise.

18. Coming to the Surface 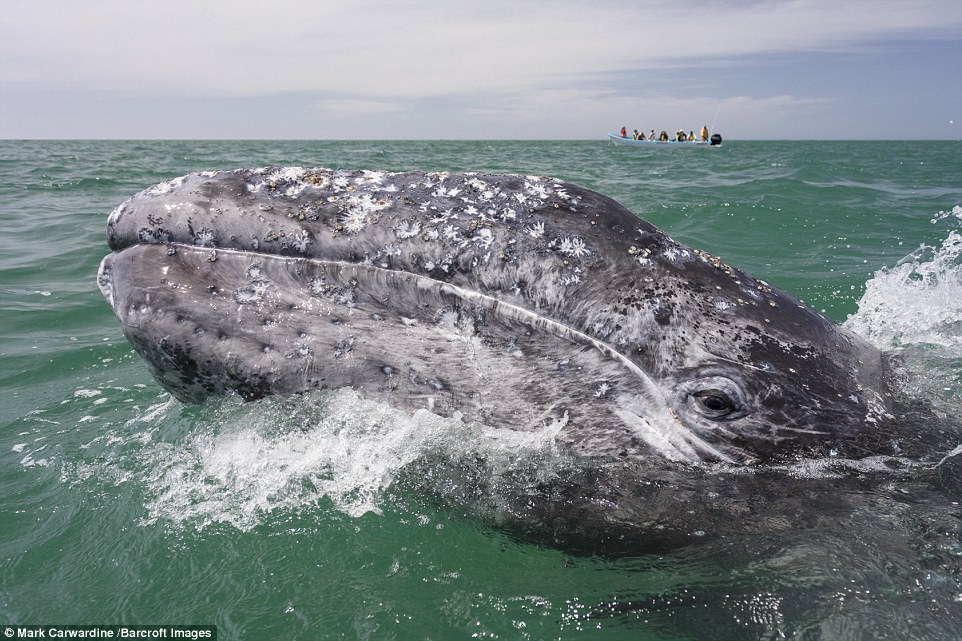 Soon after she got up and greeted the tourists, the mother whale helped her calves to the surface. As you can see, they weren’t so little – they were about 14ft! And then the whales got closer and closer… 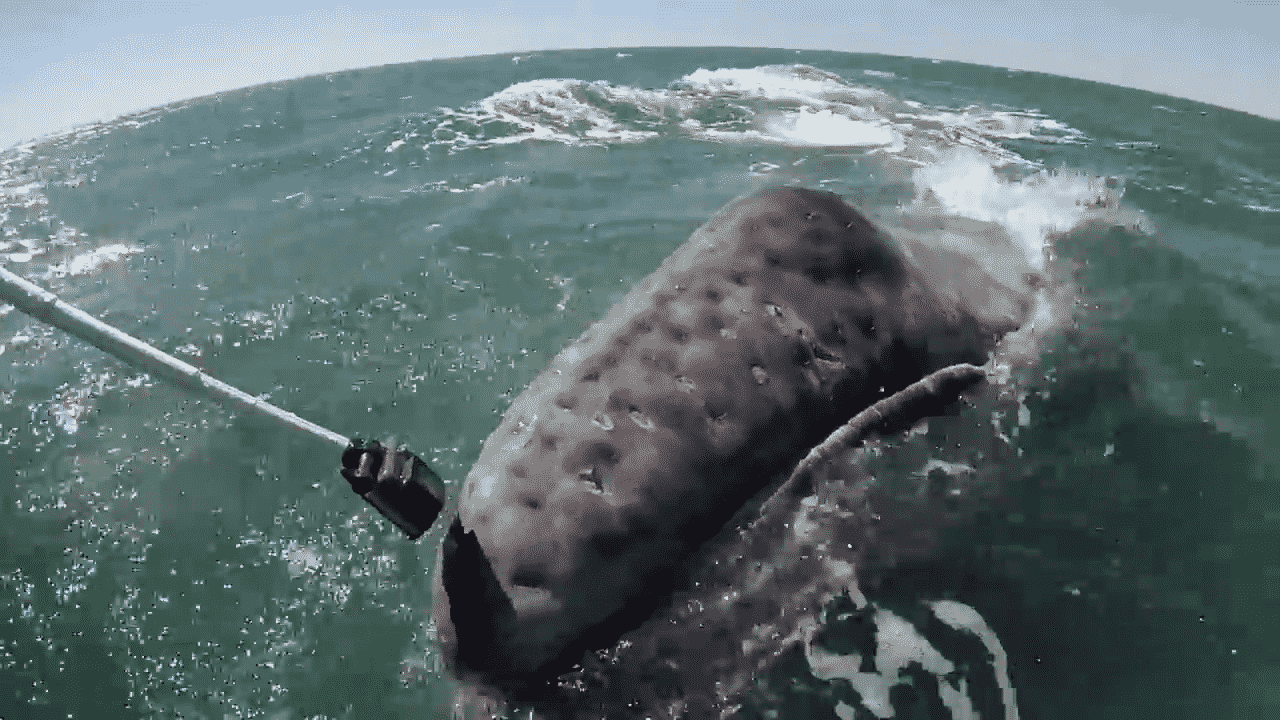 With a little courage inspired by their mother, the calves came so close that tourists even got to touch them! The youngsters put on a show for the tourists that did their best to take photos of them. The photos they took will leave you in awe! 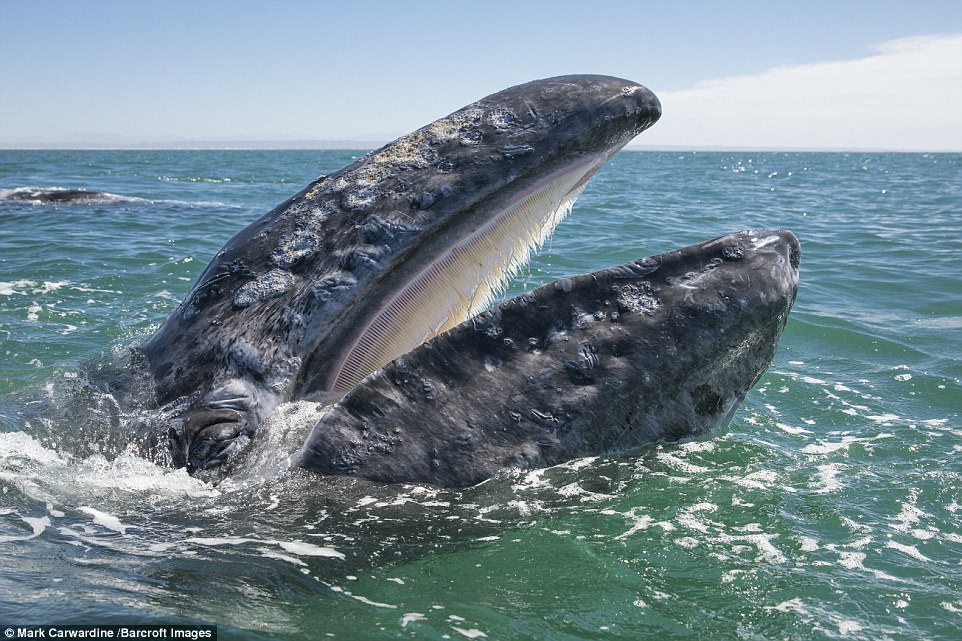 Mark Carwardine is a wildlife photographer and zoologist, and he was there when the whales got close to the boats. He could take photos of their baleen plates – the bony bristles that stand for teeth and they filter the seawater. And that’s not all! 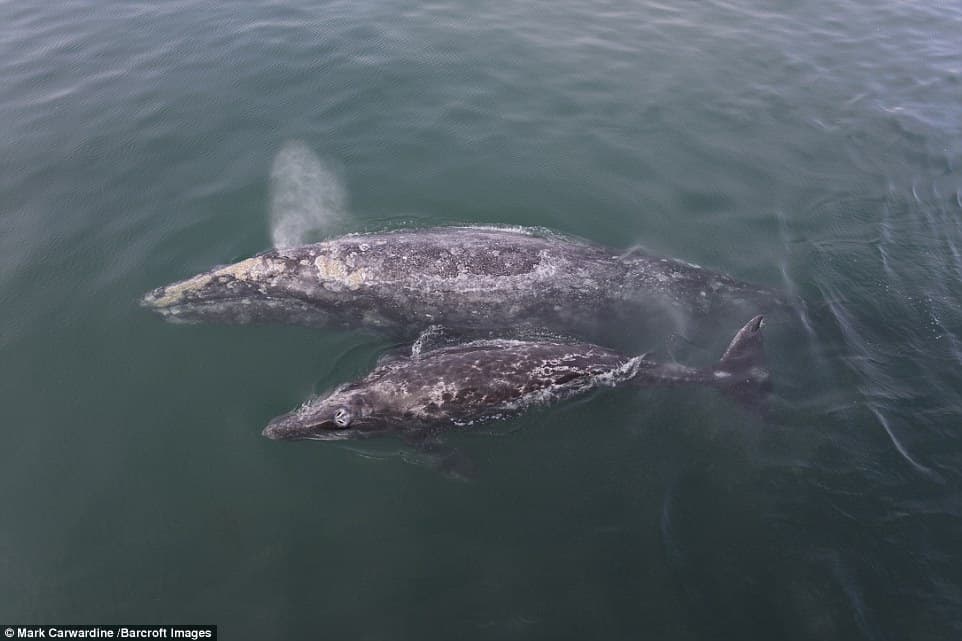 The zoologist said that ‘Grey whales migrate on average 8,000 kilometers between their summer feeding grounds in the Arctic […] and their winter breeding lagoons on the Pacific coast of Baja’. And when Mark arrived, it was the right time! 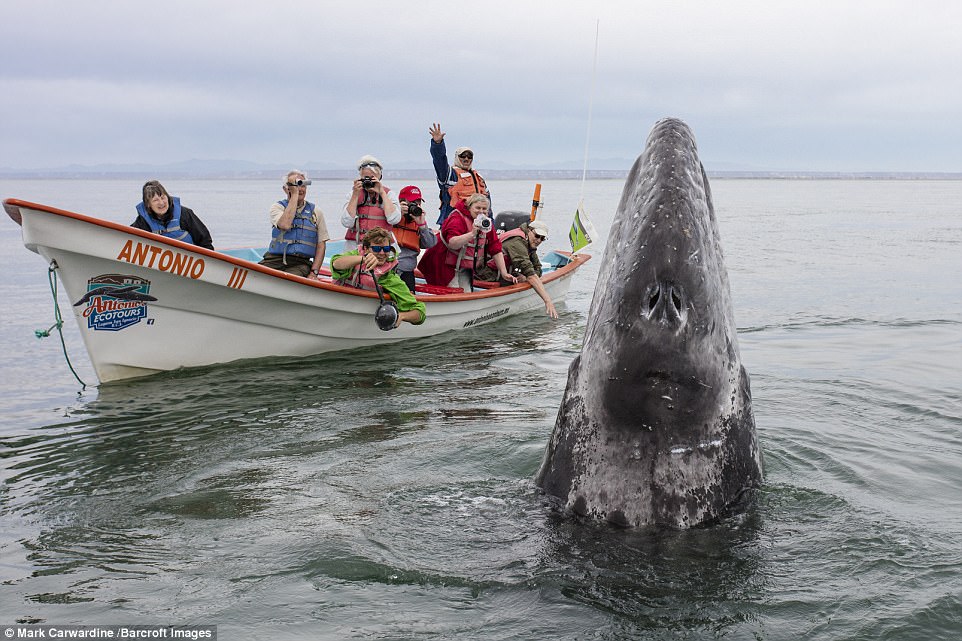 ‘I encountered the whales in March, the curious youngsters were playful and bored’, said Mark. He also added that the mother whales ‘often bring their babies to ‘interact’ with humans’. And the whales really love it, perhaps because of the back rubs… 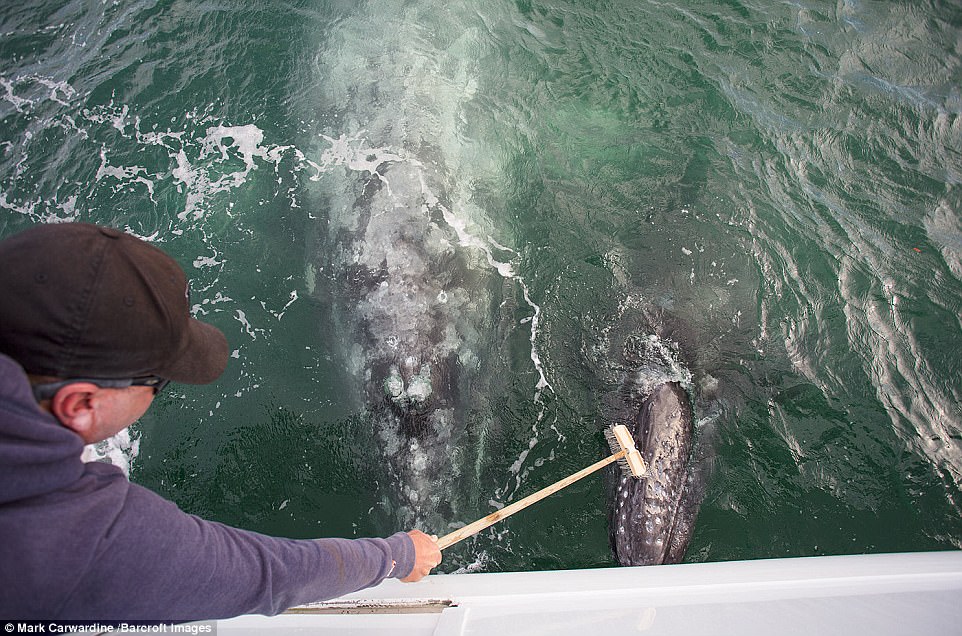 The tour group had some brooms on their deck and they used them to scrub the calves’ backs. And you won’t believe it, but these babies really loved to be scratched! Here is what Mark said about this. 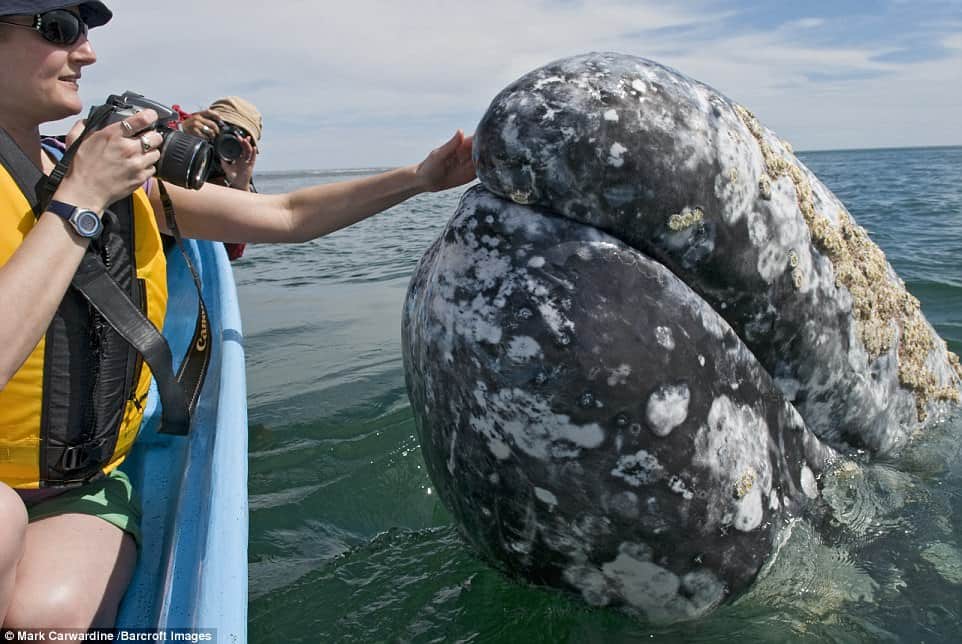 ‘They seem to enjoy having their skin rubbed and scratched. Out of all species of whales and dolphins, grey whales have the most hairs’. He said that each hair follicle could be ‘very sensitive, so they must enjoy the feeling.’ On top of that… 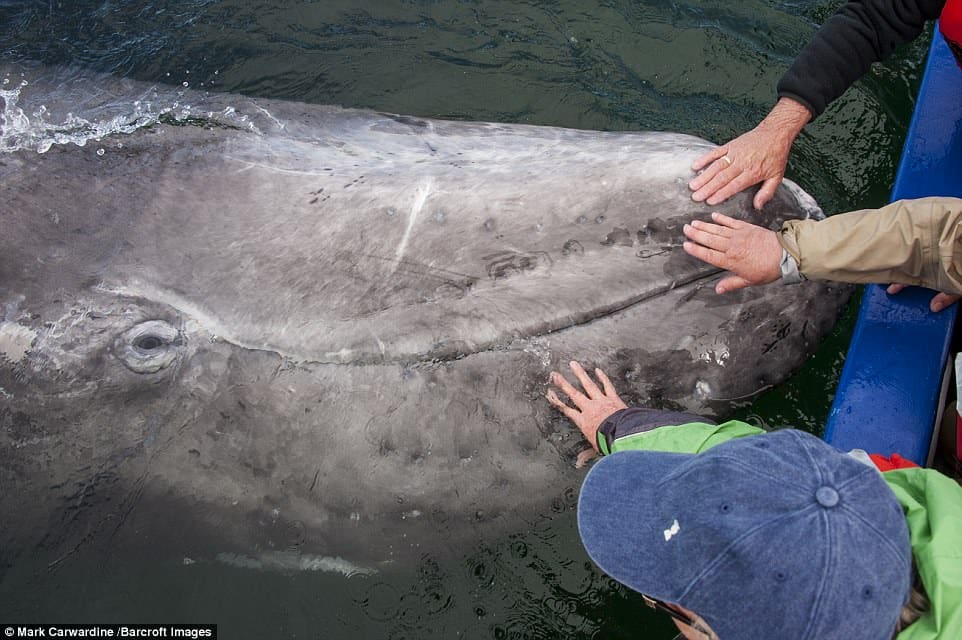 Mark also said that whales ‘have a lot of barnacles and whale lice, so probably appreciate the sensation of getting those rubbed off.’ The whale lice are not actual lice… they are related to skeleton shrimps and look like a crustacean.

10. They Are Not Captive 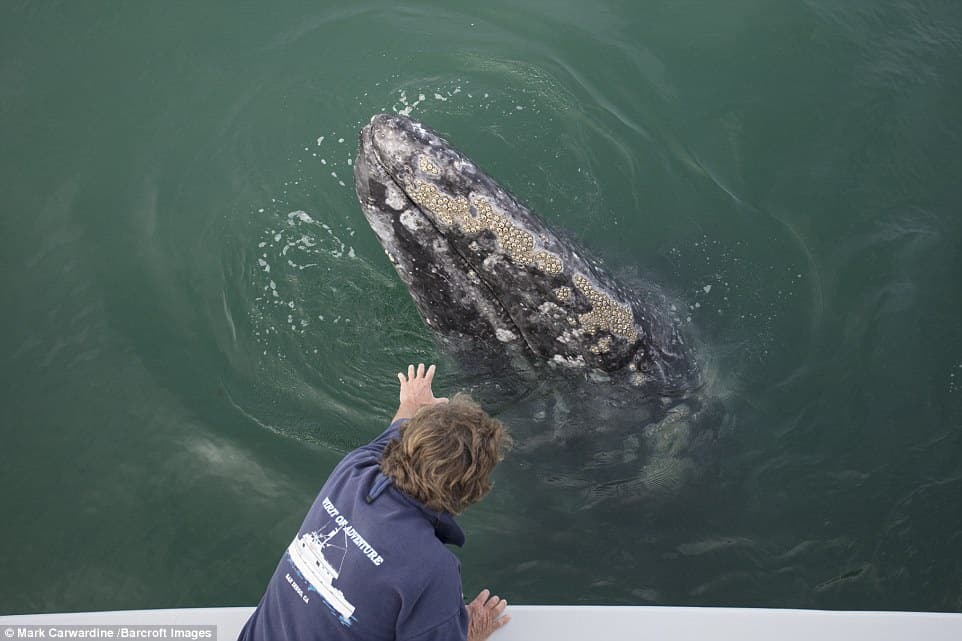 The zoologist stated the presumption of whales being captive is wrong. They ‘approach the boats on their own terms.’ And that’s the only time when ‘people are encouraged to actively touch a wild animal’, he added. Curious to learn how it feels? 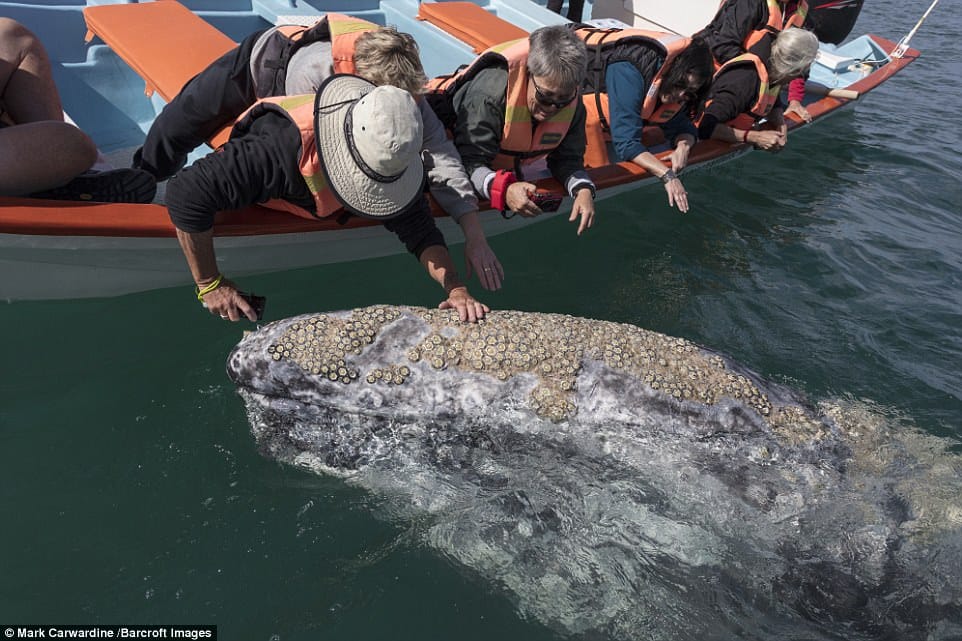 Interacting with such a huge and gentle wild animal made everyone ‘feel a surge of indescribable emotion’, said the photographer. He also said jokingly that the only challenge is to keep the ‘camera dry’ because they ‘aim their blows straight at the lens’.

You won’t believe how many years whales can live! 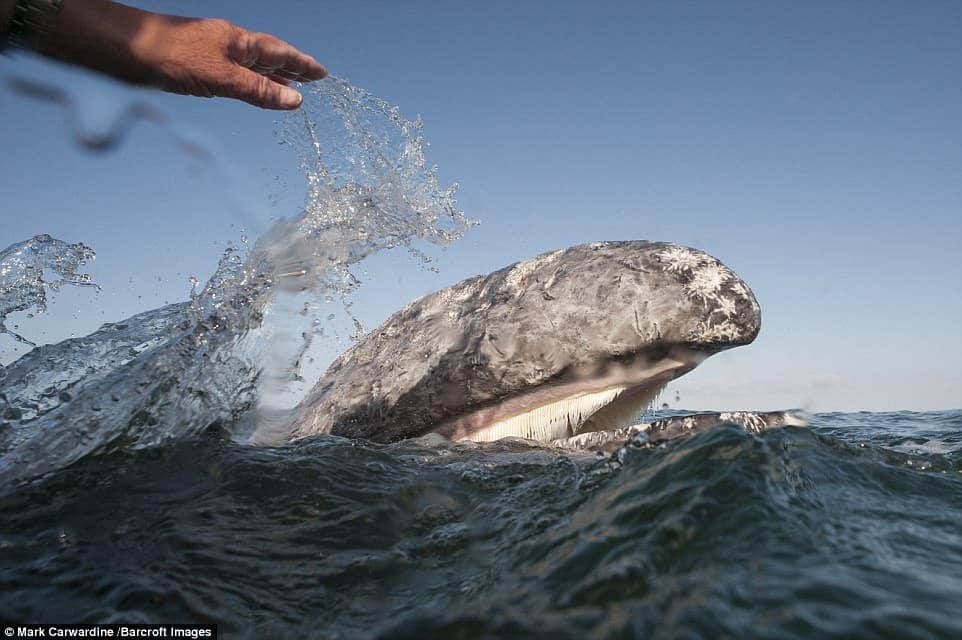 Grey whales can live up to 70 years, and between the 17th and early 20th centuries, they have been hunted for oil. But in time, the giant whales have recovered to 20,000 because they are a protected species and hunting them is now illegal.

7. The Whales Have Two Blowholes 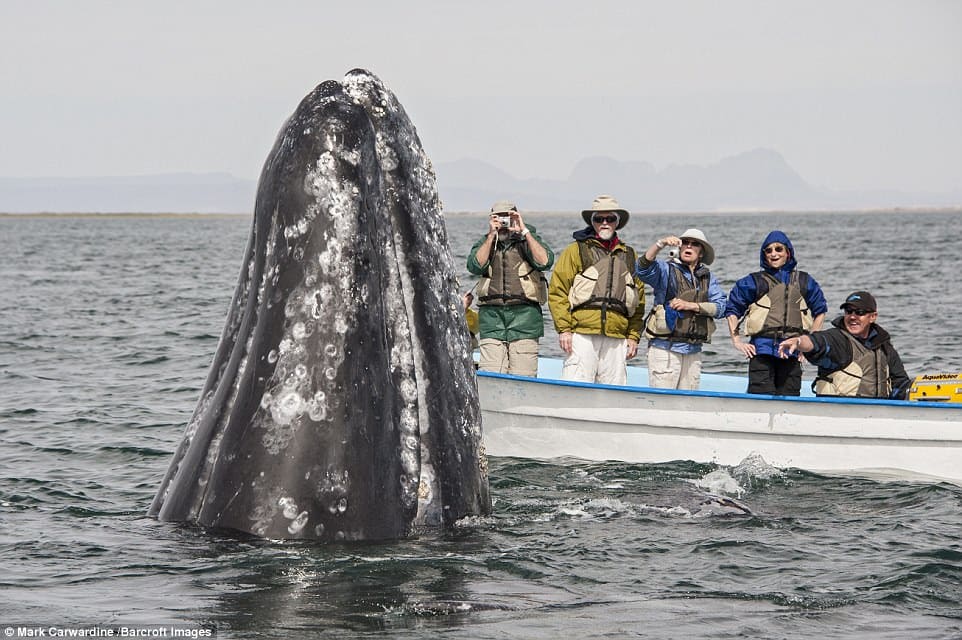 They have a very thick blubber – up to ten inches and have two blowholes. These whales have a dorsal hump instead of a dorsal fin. And talking about the blowholes, tourists that come close to whales really need to do this… 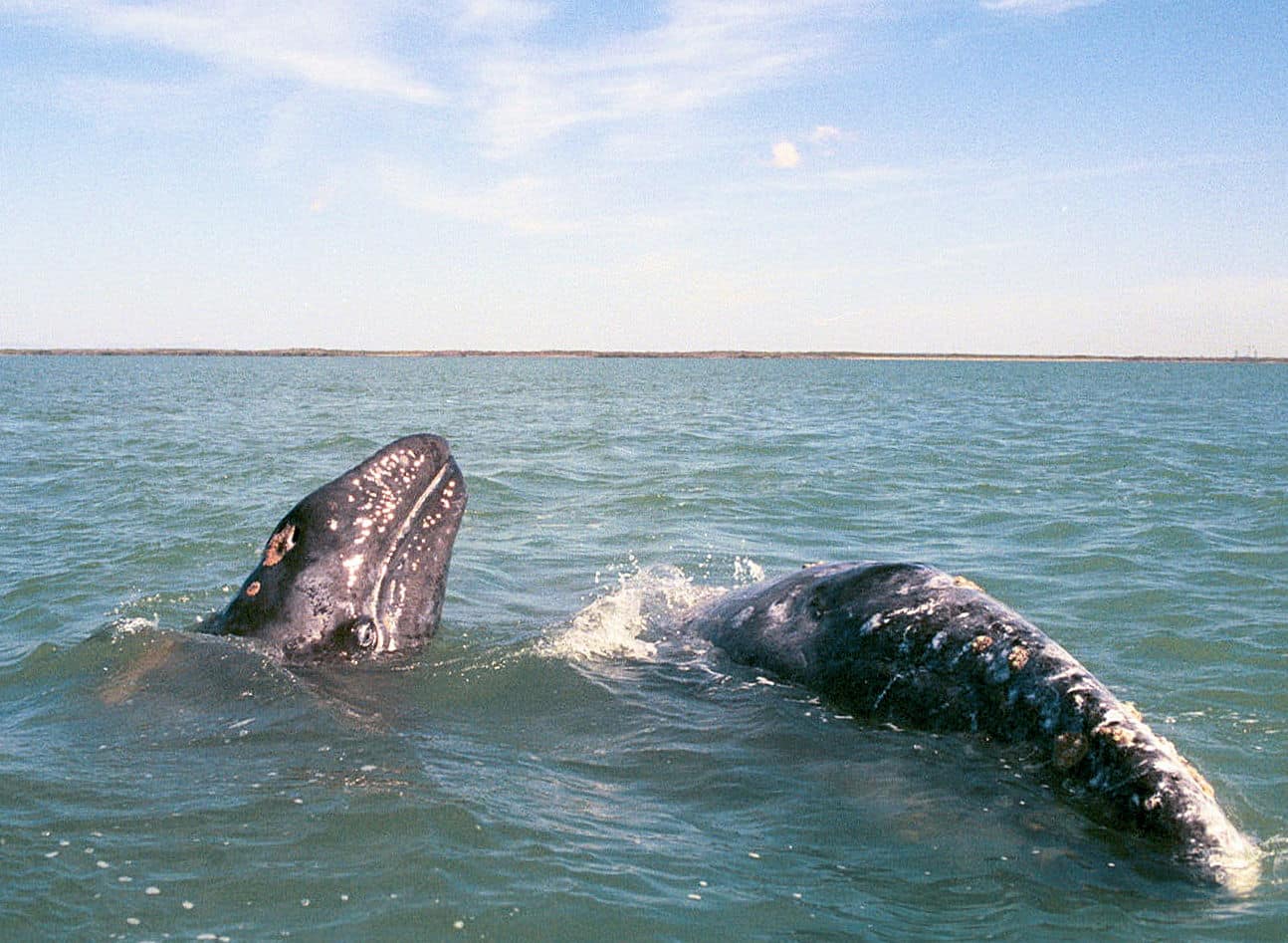 It’s beautiful to see a whale coming to the surface and spraying air with water… and snot? Yes, there’s mucus too and tourists are ‘lucky’ to get drenched in it, but the experience is worth all the mucus because you can clean it with a good bath… 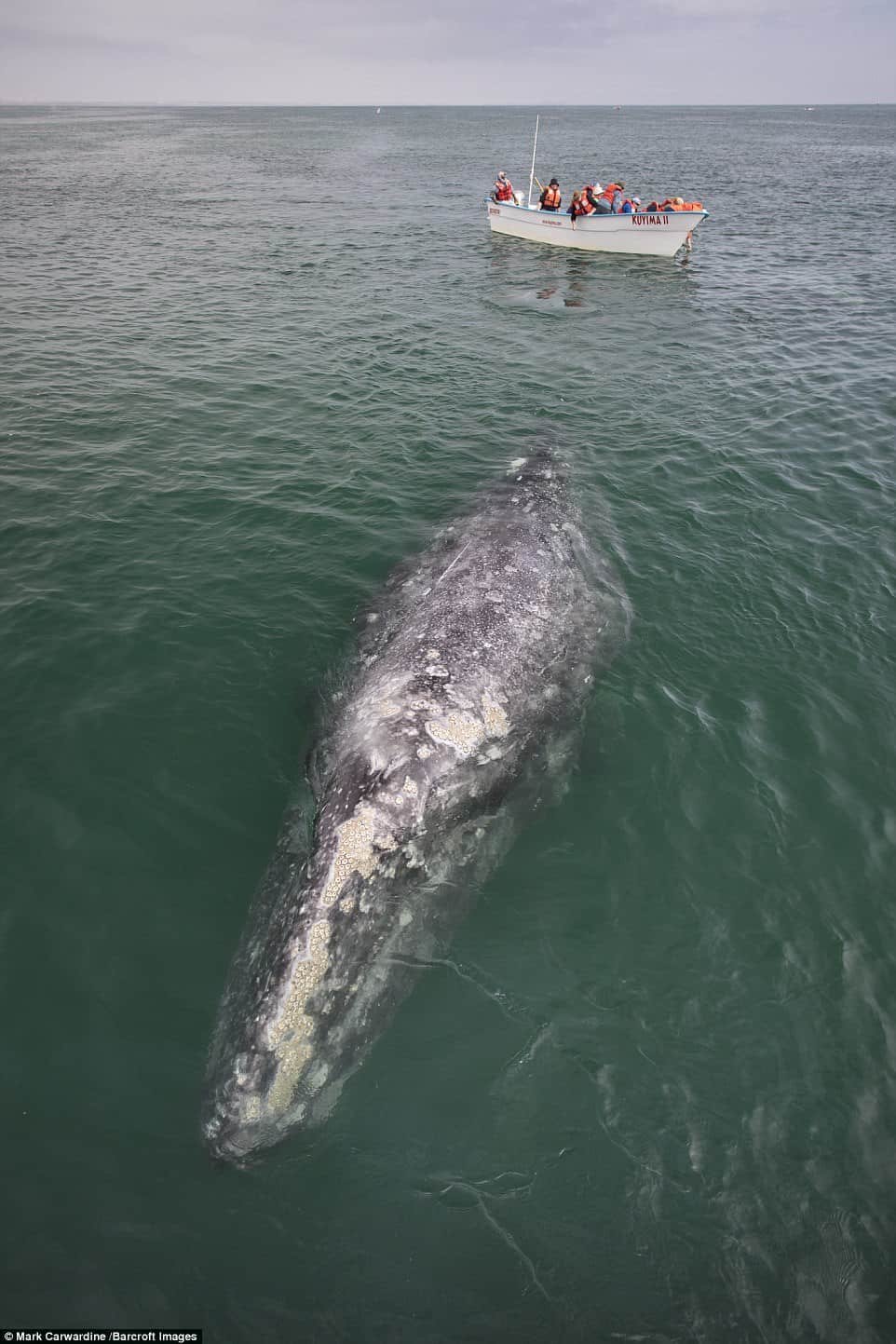 A marine biologist – Steven Swartz – who has studied whales for 40 years, was impressed by an encounter he had in the San Ignacio Lagoon. He named the whale Gracie and she starred in his book. This is what happened when Gracie met Steven. 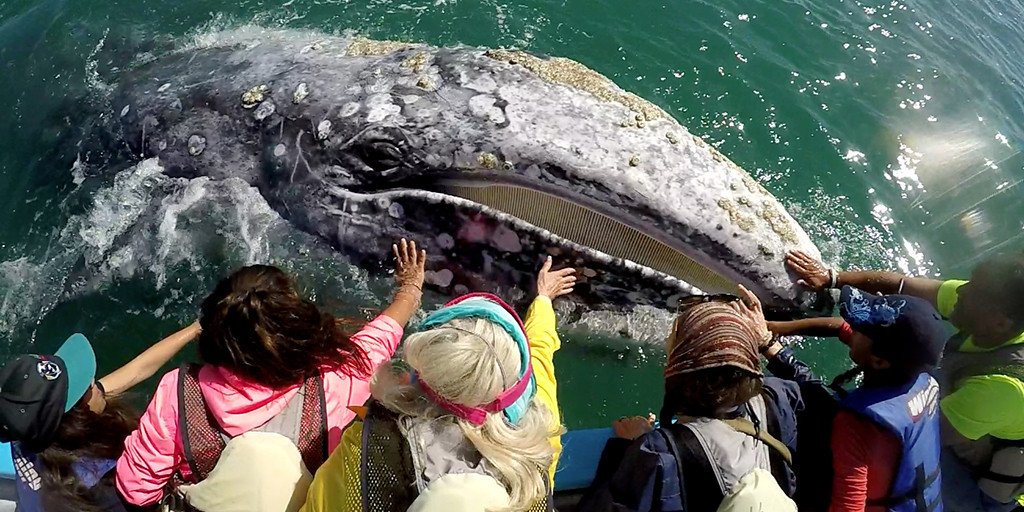 In his book ‘Lagoon Time: A Guide to Gray Whales and the Natural History of the San Ignacio Lagoon’, Steven said: ‘Rolling under the boat, she would turn belly up with her flippers sticking 3 to 4 feet out of the water on either side of the craft…’ 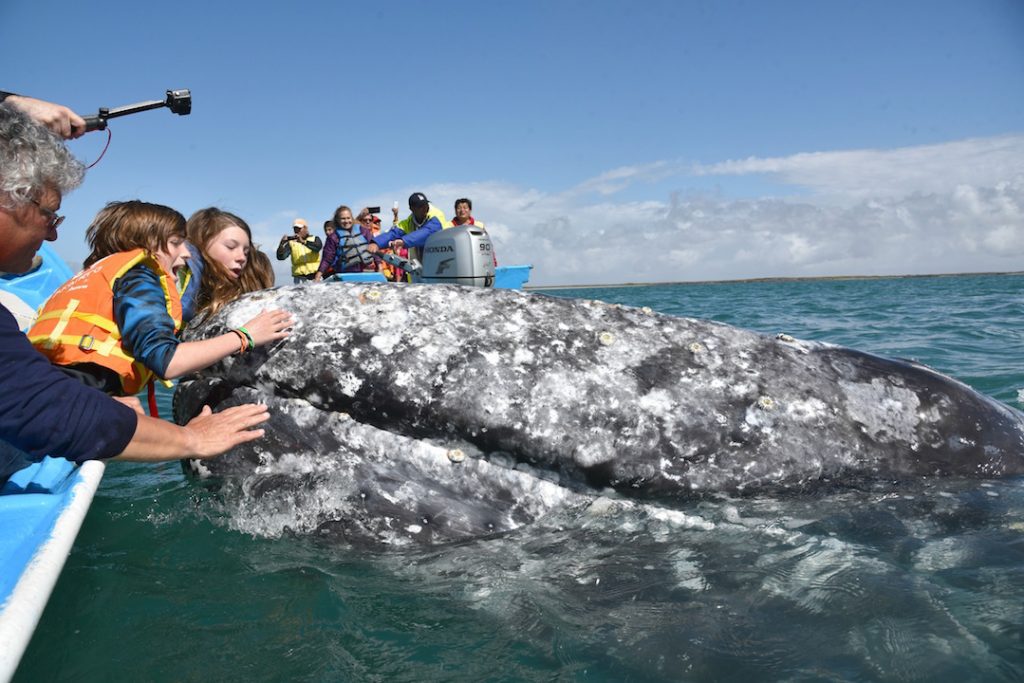 Then Gracie lifted the boat ‘off the surface of the lagoon, perched high and dry on her chest between her massive flippers’. And after that, Gracie would lie along the boat to get some good rubs. But Baja was in a grave danger back then… 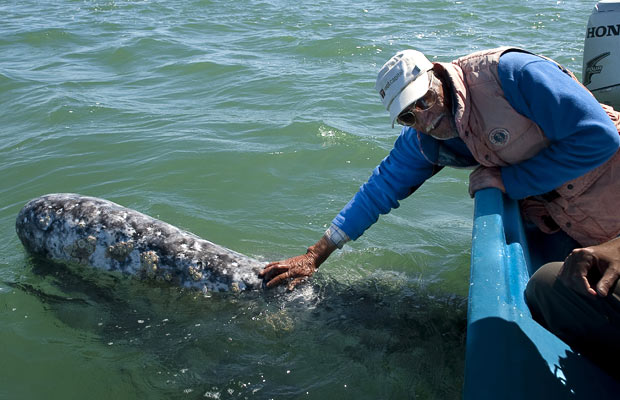 San Ignacio Lagoon wouldn’t have been the same if plans to build a saltworks would have gone through. The lagoon and the breeding grounds for the whales wouldn’t have existed. But environmental campaigners fought against it until this happened…

1. The President Was Amazed 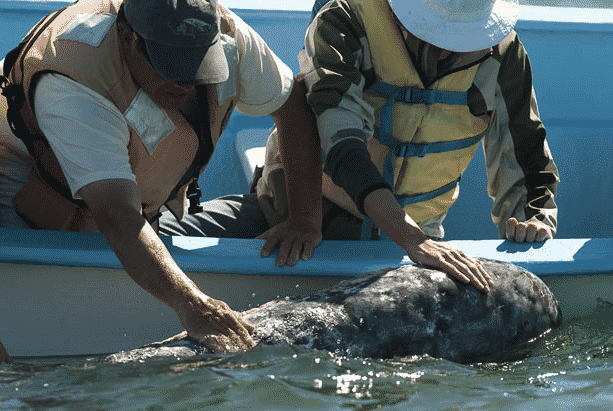 In 2000, Ernesto Zedillo who was president at the time visited the lagoon with his family. He saw the friendly whales that approached his boat and they could all touch them. Days later, the saltworks project was called off by the president.

Thanks to everyone that fought against destroying a natural haven for the whales, we can all be witnesses to these amazing moments!