Lion Cub Reunites With Her Rescuer. After 4 Years, Would She Recognize Him?

There is a special bond between man and animal. This relationship crosses the line between friendship and ownership and gives us memories we hold onto forever. But do our animal friends hold onto those memories as well as us? Here is the captivating story of a man and a lion who overcame all odds to grow together as friends – but does that friendship last through the years? 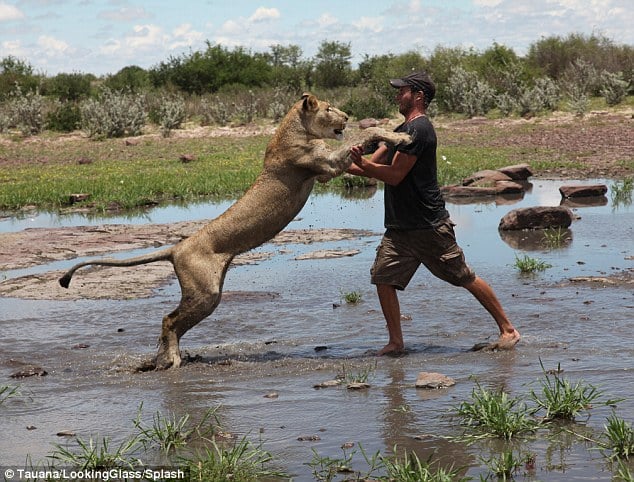 Valentin Gruener of Germany always loved cats. From his time as a child, he wanted to be a veterinarian. After getting a false start working in a Canadian oil field, he eventually made his way to Africa – a decision that would change his life, especially because of who he would meet there… 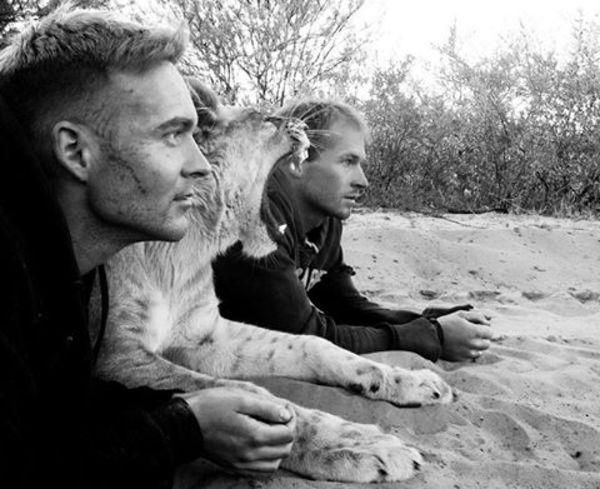 Mikkel Legarth of Denmark also loves cats, as well as all wildlife. He was working in Namibia, Africa when he met Valentin, and the two hit it off splendidly, becoming friends due to their mutual interests in caring for animals and preserving the environment. Together, they… 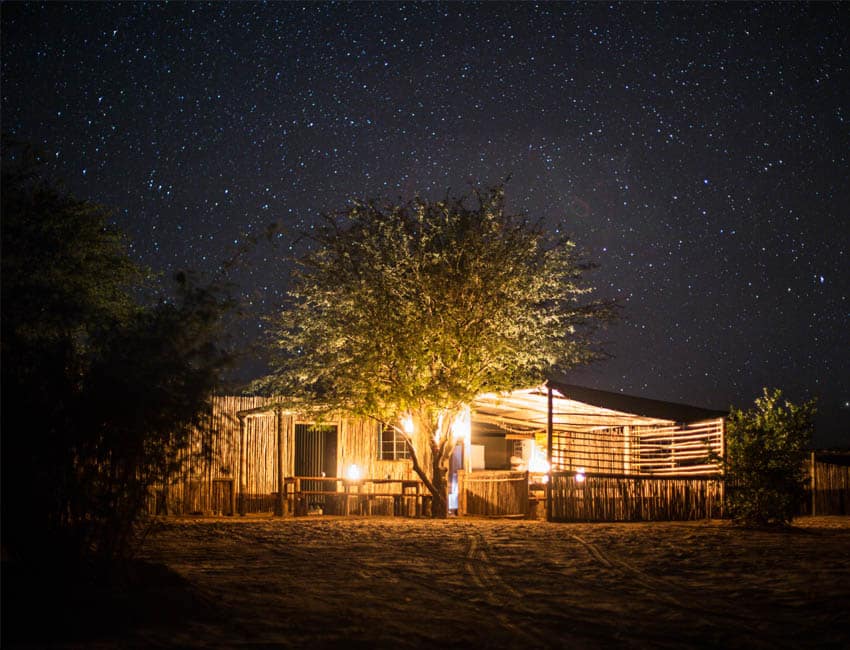 Together they founded the Modisa Wildlife project, where they help preserve the African places they now live on, as well as teach visitors about the native animals. They normally know exactly what to do in every situation regarding the native fauna, but one day they were thrown for a loop… 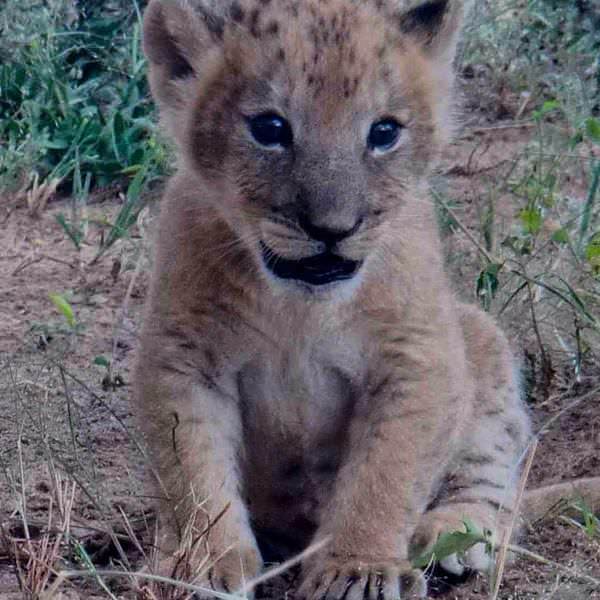 One day, Valentin discovered a small cub in the wilderness, abandoned by her pride. The lioness kitten was no more than 10 days old, and if left to her own devices, would surely have died. Valentin decided it was his duty to take her in, but he didn’t know what he was getting into… 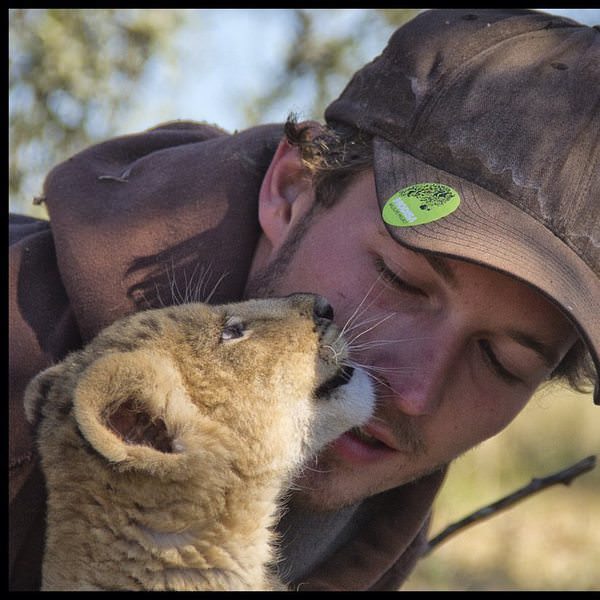 The two hit it off, and before long Valentin is in love with his newfound cub. Knowing that they will be spending quite a bit of time together, Valentin decides to name her Sigra. But it wasn’t long before he ran into a problem raising her. 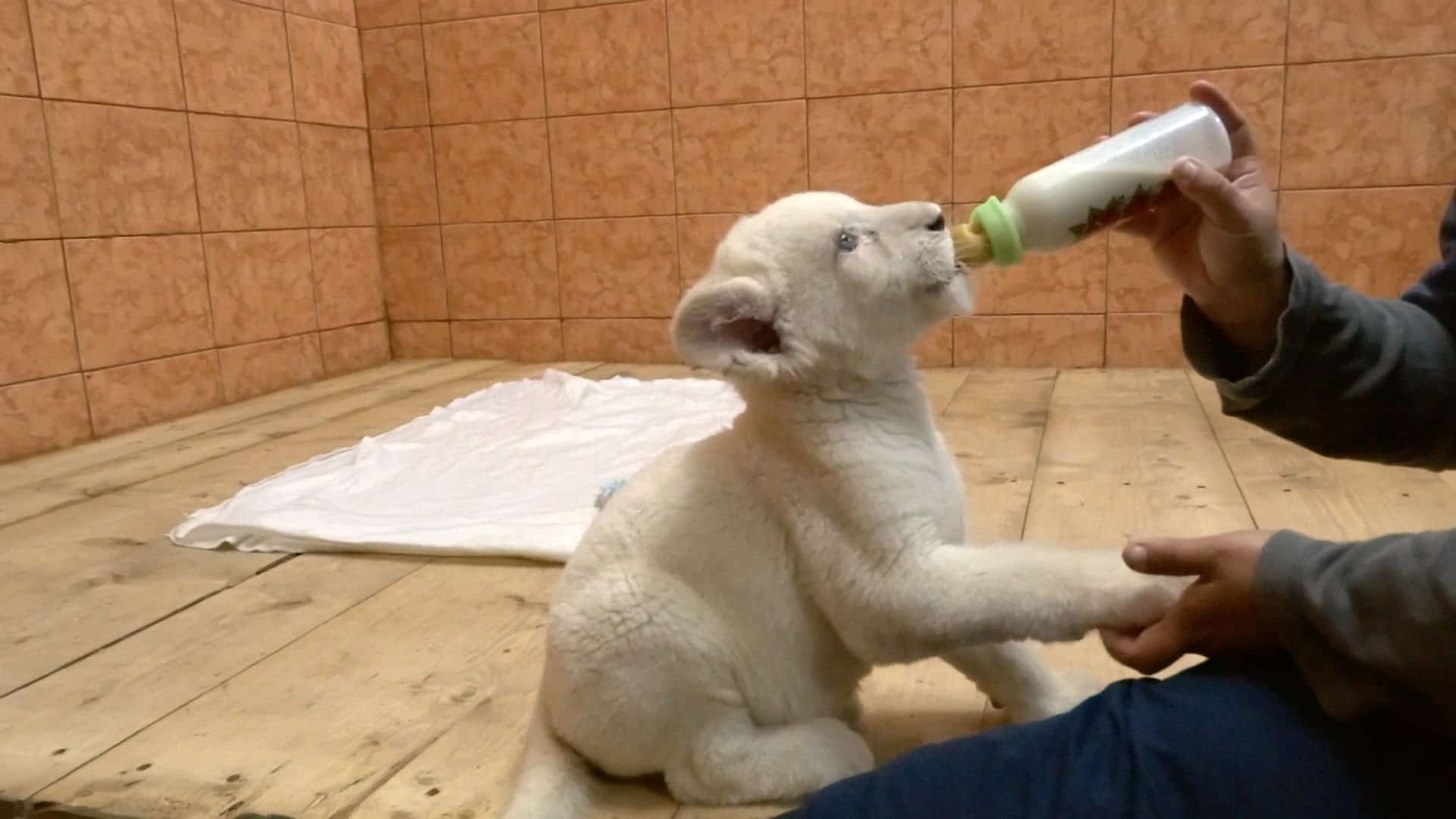 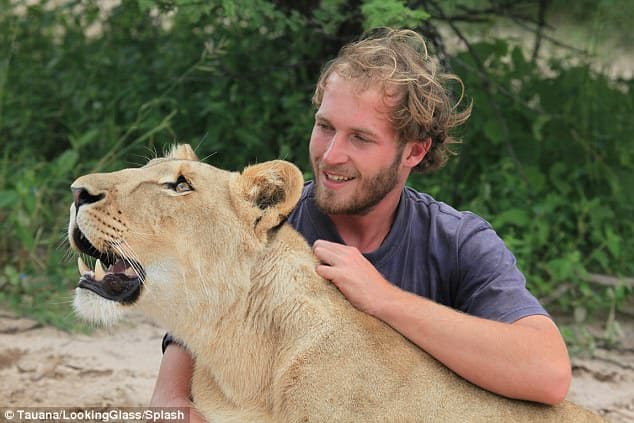 Over time, Sigra grew into a very big furry friend. She and Valentin became very close, as she accepted him as part of her pride. But as she grew older, she couldn’t keep drinking the same combination of eggs and cream from her younger days… 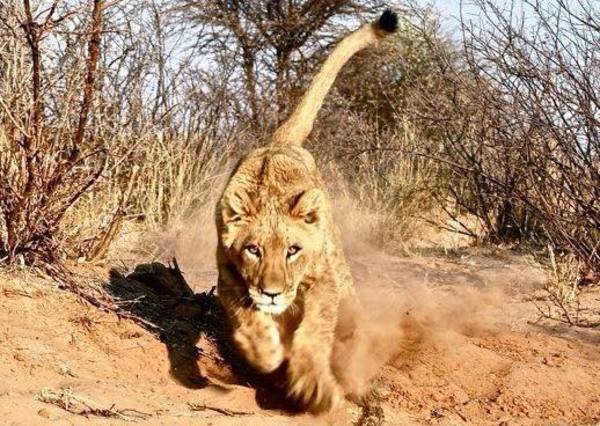 While Sigra is a lioness and instinct does go quite a long way, there is still much that a cub learns from their parents. Because Sigra was lacking lion parents, she didn’t know how to do important lion things, like hunt. But Valentin had a solution. 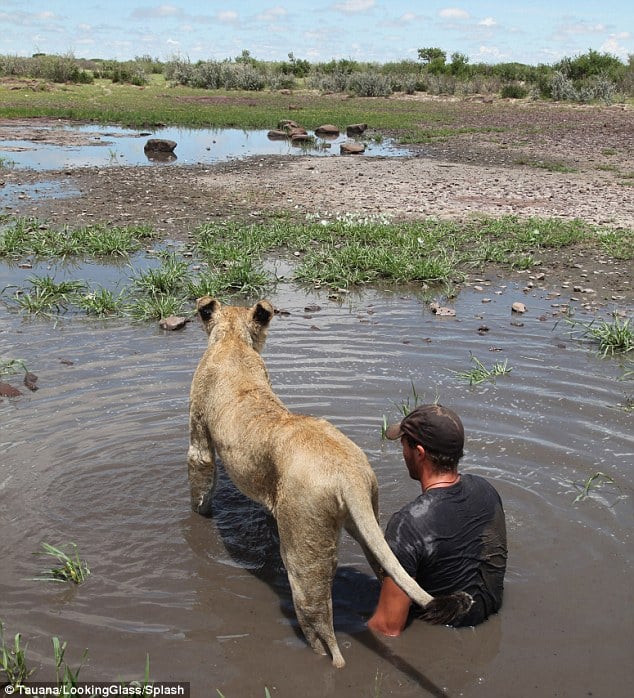 Valentin and Mikkel had to get up close and personal – they would go out into real hunting locations with Sigra, and teach her how to stalk and chase prey. It’s a dirty job, but someone had to do it… but did it pay off? 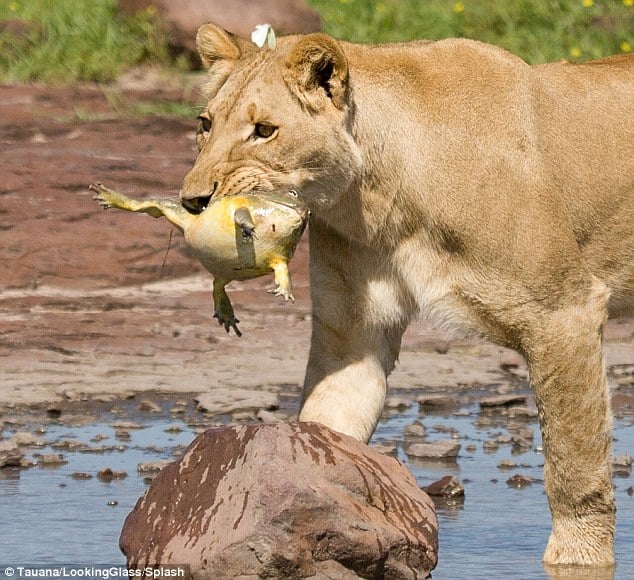 Their hard work paid off, Sigra started by catching small things, like the toad pictured here, and eventually worked her way up to bigger kills, just like all the other lions out there in the wild! Valentin and Mikkel were so proud of her, they decided to record it. 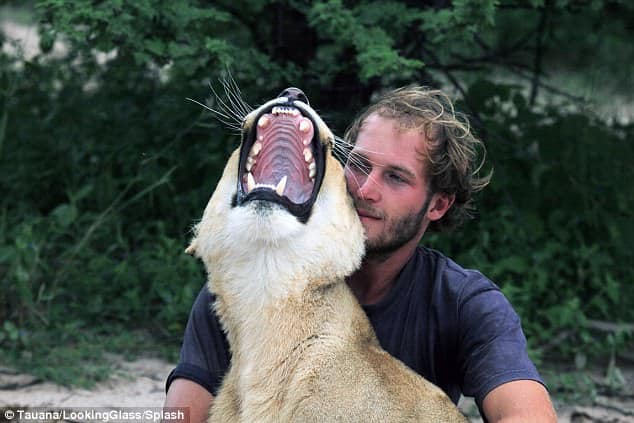 The life and raising of Sigra have been recorded, and will be released as a six-part film documentary, called “Lionheart.” The tale of Valentin and Sigra is one that should be shared with the world, don’t you think? Valentin and Mikkel sure think so, because… 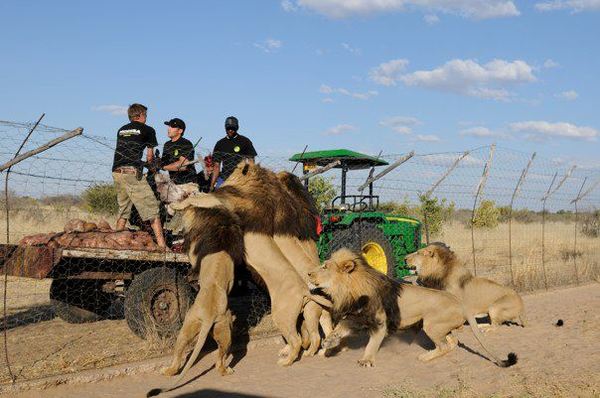 Li0ns are big, dangerous animals. They normally kill human-sized animals for food, and it is not wise to aproach one in the wild. This makes it clear why Sigra will only accept Mikkel and Valentin – anyone else is not safe around her… 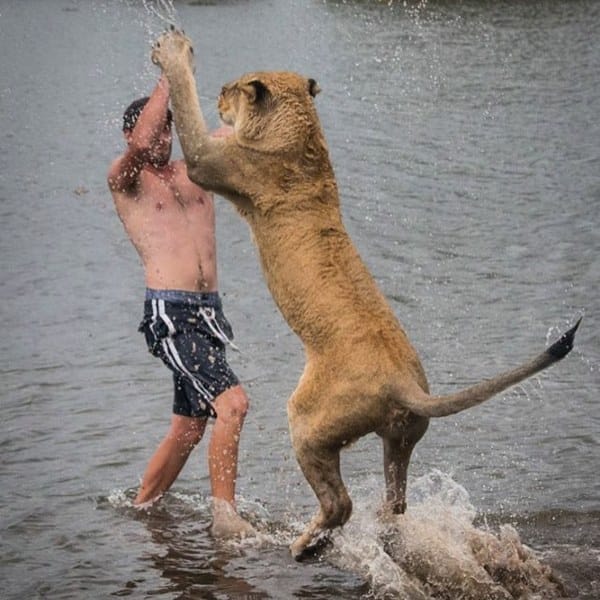 Despite her size and power, Valentin feels safe around her, and so she feels safe around him! As proof, here’s a picture of one of their many times playing together in the water. Looks like fun, right? Standing up, we get a feel for how big Sigra really is… 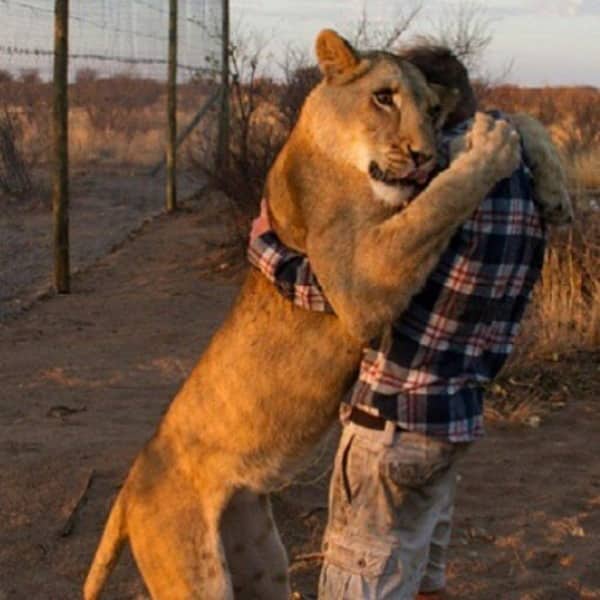 When they found her, Sigra weighed less than even 20 pounds, young and malnourished. Today, Sigra weighs around 300 pounds, happy and healthy for her age. Everything seems to be going well, but all good things must come to an end… 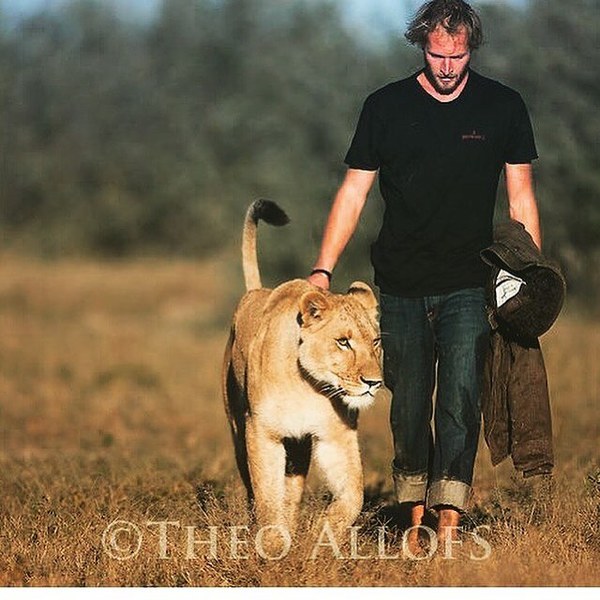 After three years spent together and many new skills learned, as well as lots of fun had, Sigra needs to find her own way in the wild. After all, that was the goal from day one. She can’t stay with Valentin forever… 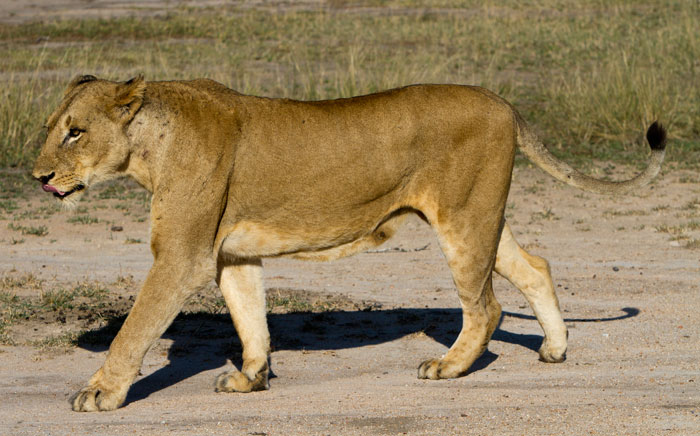 Yes, Sigra needs to learn how to live on her own, away from her Modisa Wildlife family. If she can’t, she’ll never find a mate and eventually make a family of her own. And so, the hardest part comes next… 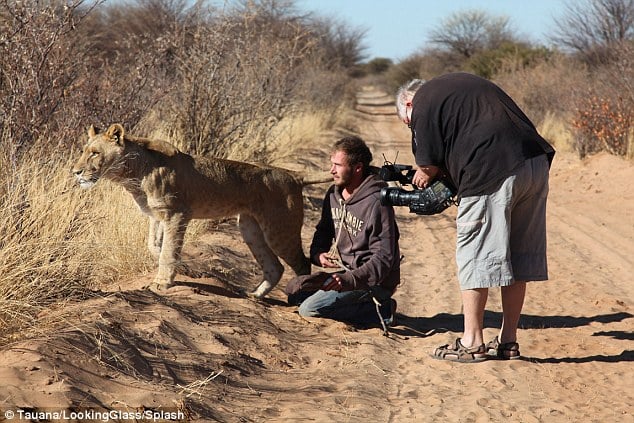 Valentin started by separating from Sigra for just a couple days at a time, then worked his way up to weeks. Each time he did so, it was a little harder for both of them. Eventually, he hadn’t seen Sigra for an entire month… 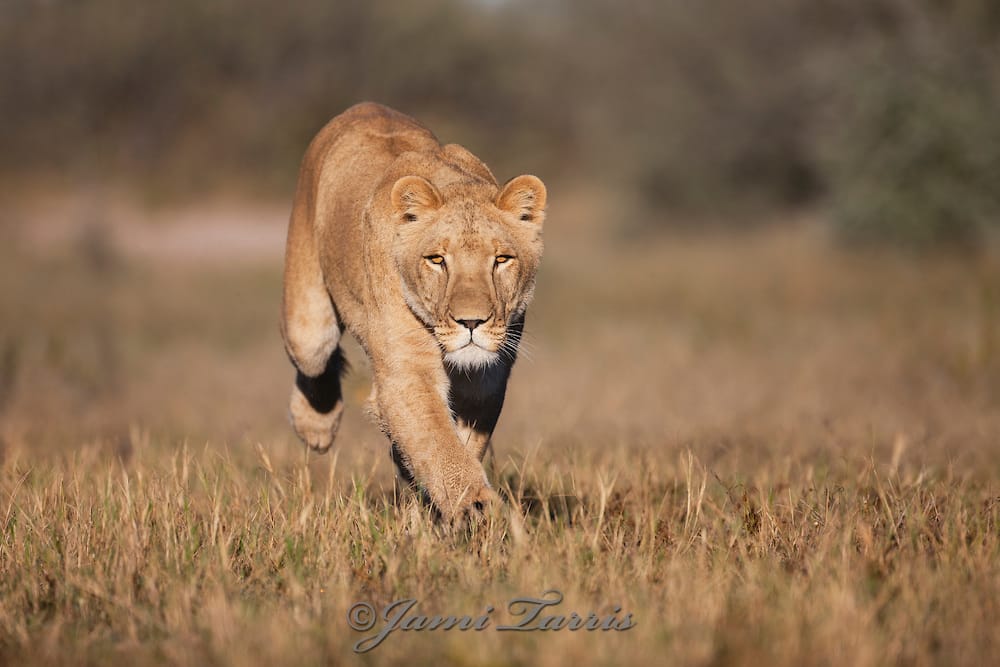 After not having seen Sigra in a month, Valentin was worried that she might have become so accustomed to the wild that she wouldn’t recognize him. After spotting her in the distance, Sigra crouched, and started bounding towards him! But what happened next? 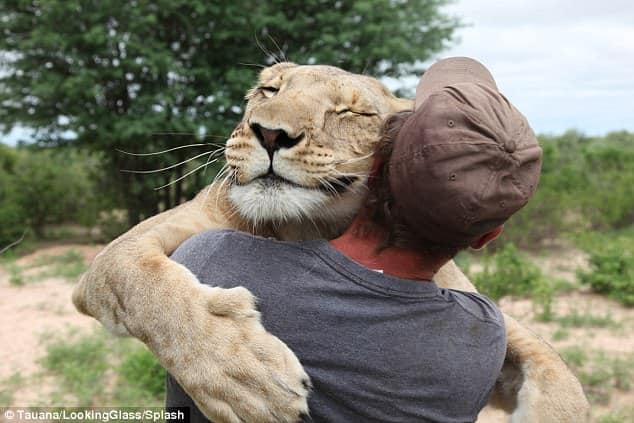 She gave him a big hug! Yes, Sigra remembered Valentin and Mikkel after all their time apart, and she still loves them just as much! What a relief for Valentin, who gets to spend time with his favorite cub… 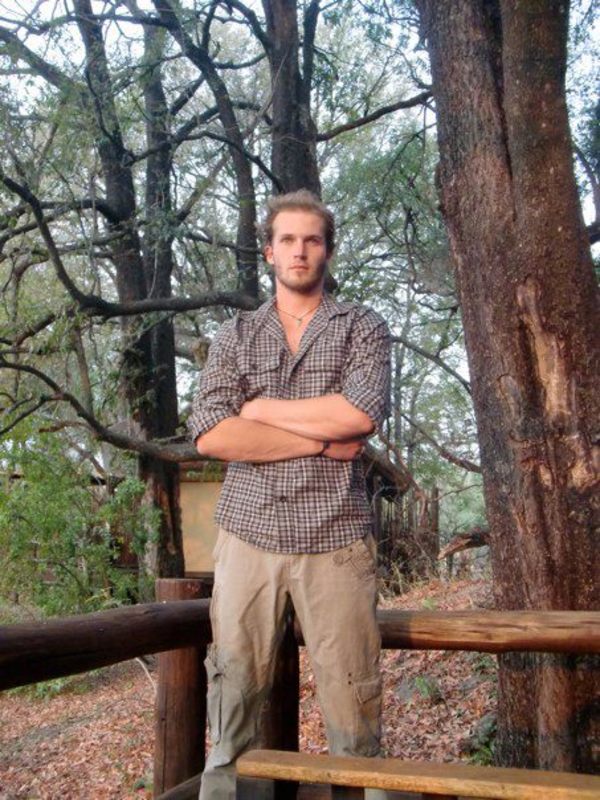 After all their time together, Valentin and Sigra will be friends for life. And who knows – maybe some day Valentine can help SIgra raise her cubs the same way he helped raise her – how poetic.