Being a firefighter is like being a superhero! Firefighters are brave and will go through burning houses to save people and their pets, they save them all even from floods and it doesn’t matter if it’s a human or a dog or cat, they’ll try their best to save any living creature! And when you save dogs or cats, the way they’re getting thanked is a slobbery kiss or a caring purr…

This next moment will warm your heart when you’ll see a dog rescued from the flood. The pooch doesn’t need too much time to think and jumps to kiss his hero! We’re in tears! 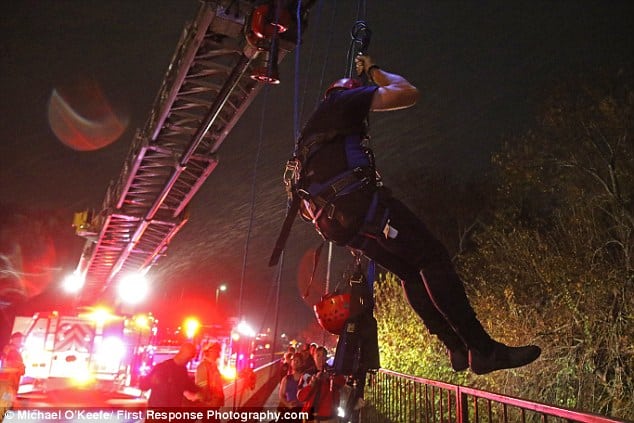 On a Friday night, Texas locals experience a big flood, but luckily, the McKinney Fire Department firefighters came to help a man and his dog. The waters reached their chest and the dog was drowning… 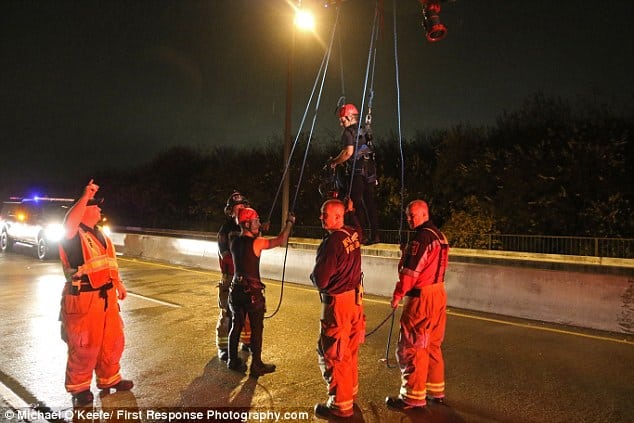 The rescue was captured on camera by photographer Michael O’Keefe. Little did he know what the dog will do after he’d be rescued! But before getting to the good part, let’s check out the story from the beginning…

18. An Unidentified Man Was Swept By Waters 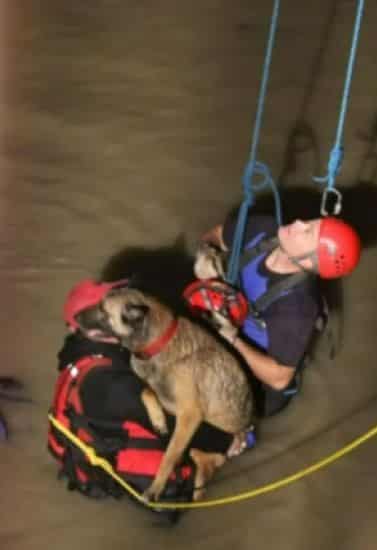 There was a man under a bridge that called the police from his cell phone to tell them he was swept by the water. He had a dog with him, which he hoisted over his shoulders to keep it from drowning… 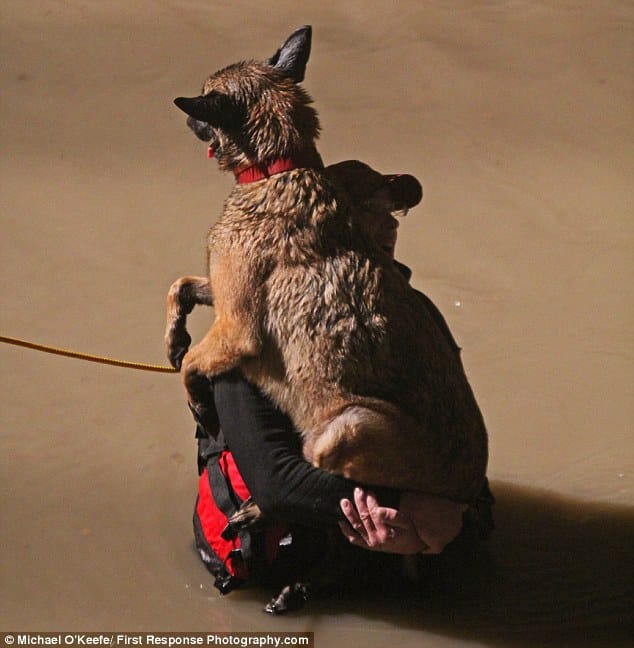 As you can imagine, the big dog wasn’t easy to hold, and the man was also trying to keep his ground. But he never let go of his dog and just waited for help to arrive. But there was one problem… 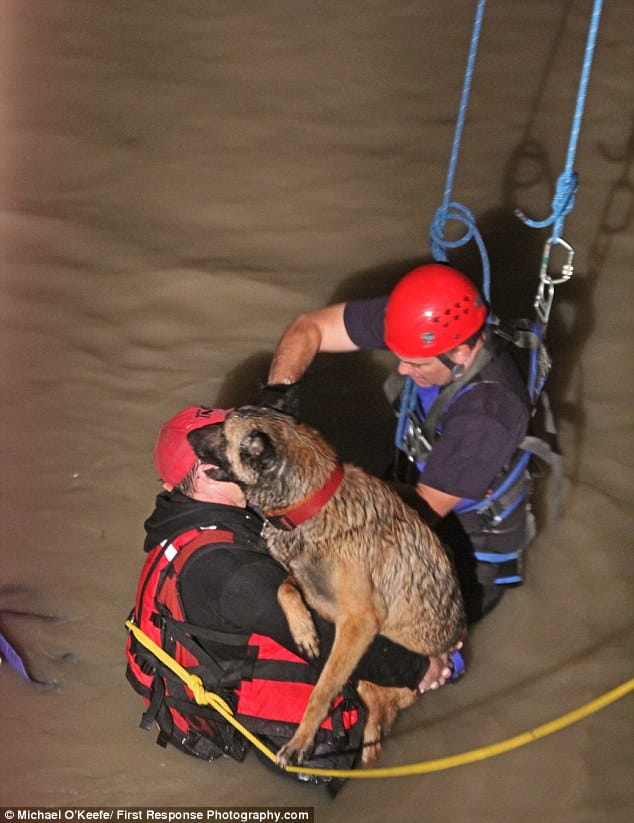 The firefighters couldn’t get too fast to the man because he couldn’t tell them his location. The man was desperate and freaking out, thinking the water will engulf him. But the search team found him this way… 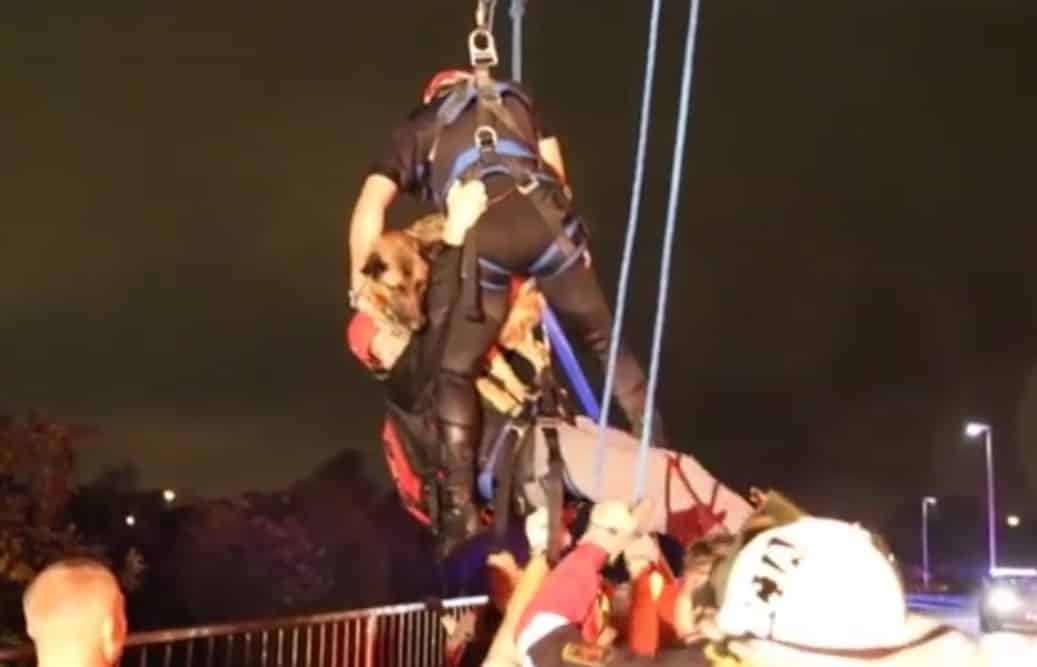 Before going to search for the man, the search team received the location by using pings from his location. When they arrived, they saw him holding his dog, trapped in a tree and surrounded by the water! 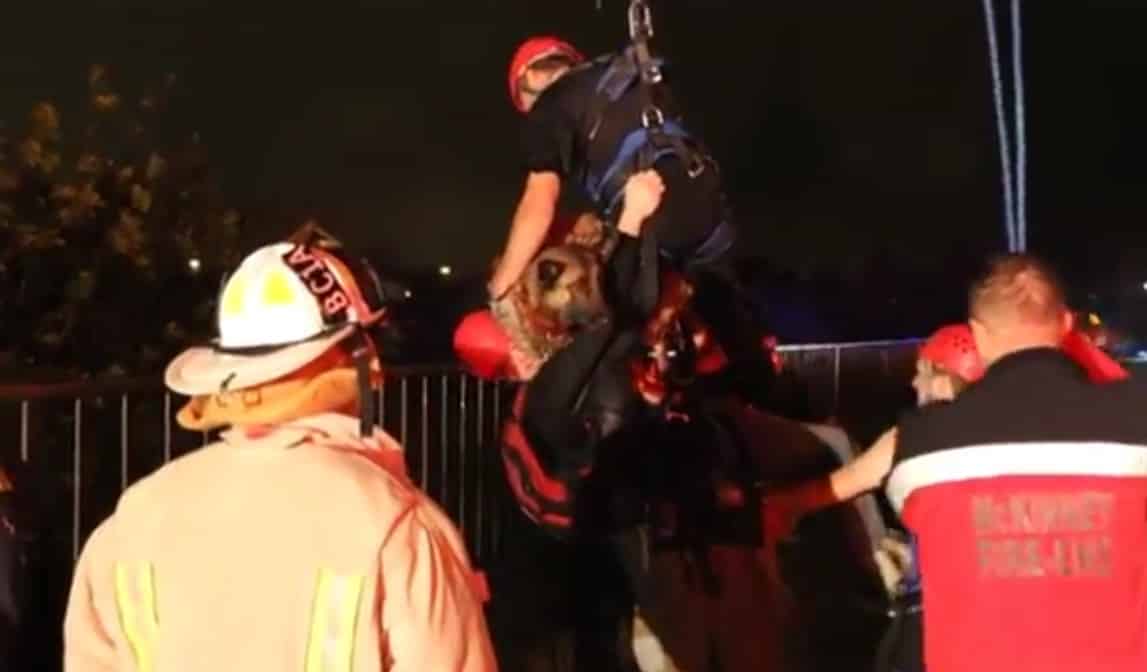 The rescue mission was tough. Firefighters had to set an engine ladder over the water from the bridge and then one of them had to hang by ropes to bring the man and the dog up to safety. Everyone was tense, hoping that everything will turn out to be ok… 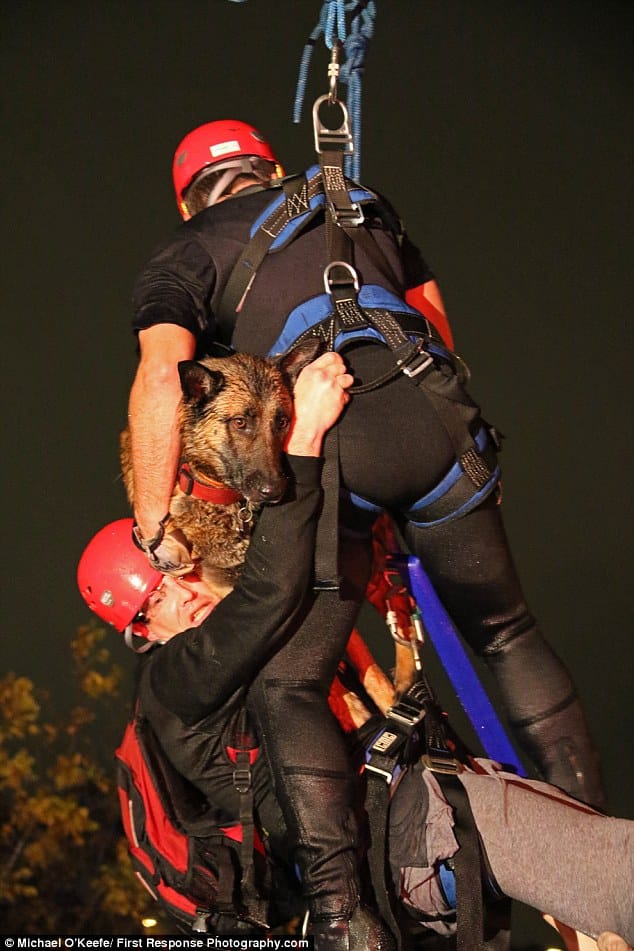 The spokeswoman for the McKinney Fire Department, Stacie Durham said of the rescue mission that: ‘It was a pretty lengthy rescue process’. But after it, the dog was very thankful… 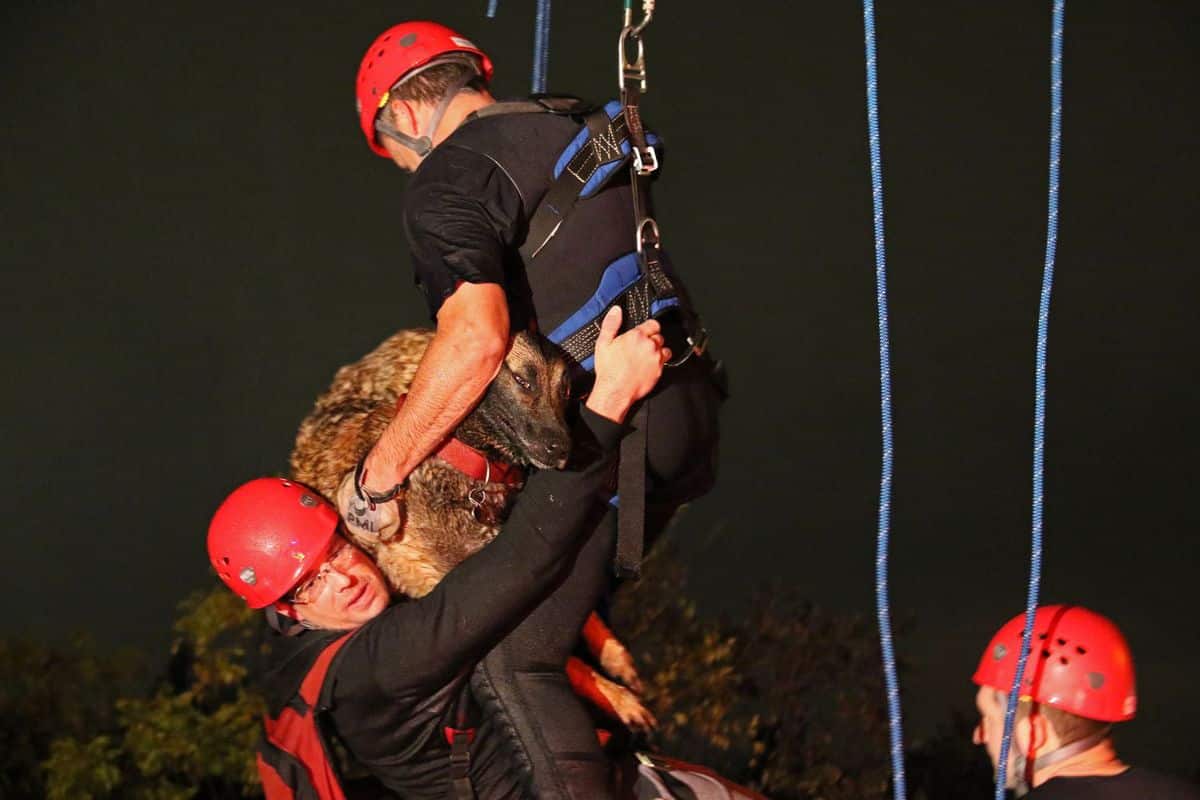 Michael O’Keefe said that ‘it was really touching to watch’. He said that when the dog’s feet hit the ground, he ‘went towards the firefighter that had saved him, jumped all over him, licked all over him’. And that’s not all! 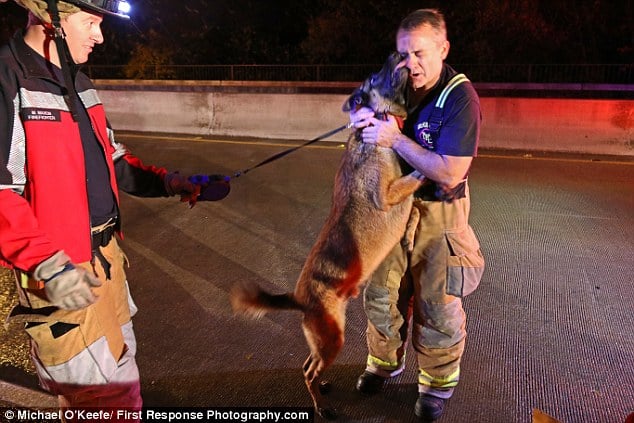 The beautiful photos and video captured by Michael O’Keefe became so famous that people really wanted to know the hero’s name and his feelings about the great experience. So, they appeared on the news… 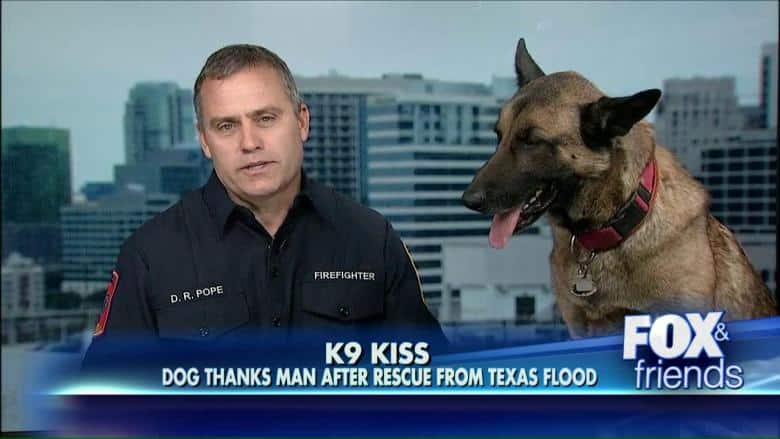 Our real-life hero is called Del Ray Pope, and he agreed to appear on the Fox News. And the pooch, called Duke, had the opportunity to sit next to him. This couldn’t be more adorable! Here’s what he had to say about the whole experience… 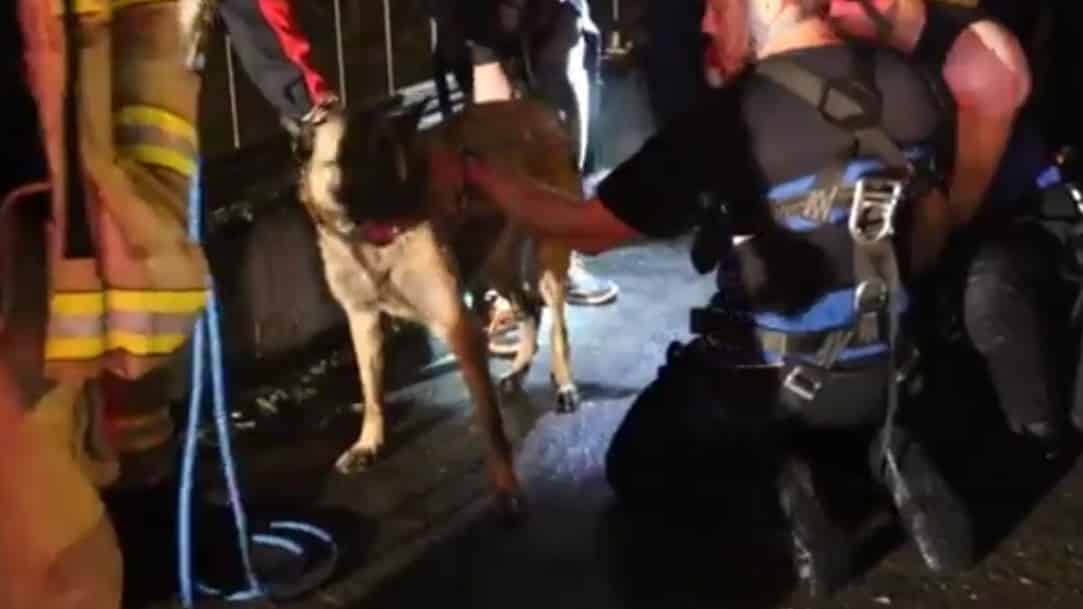 Although it was tough, Pope said that when they arrived to save the man and his dog at the Eldorado Bridge, he was glad to see that they could save the man with the firetruck ladder and rope. And then…

8. When the Special Moment Came 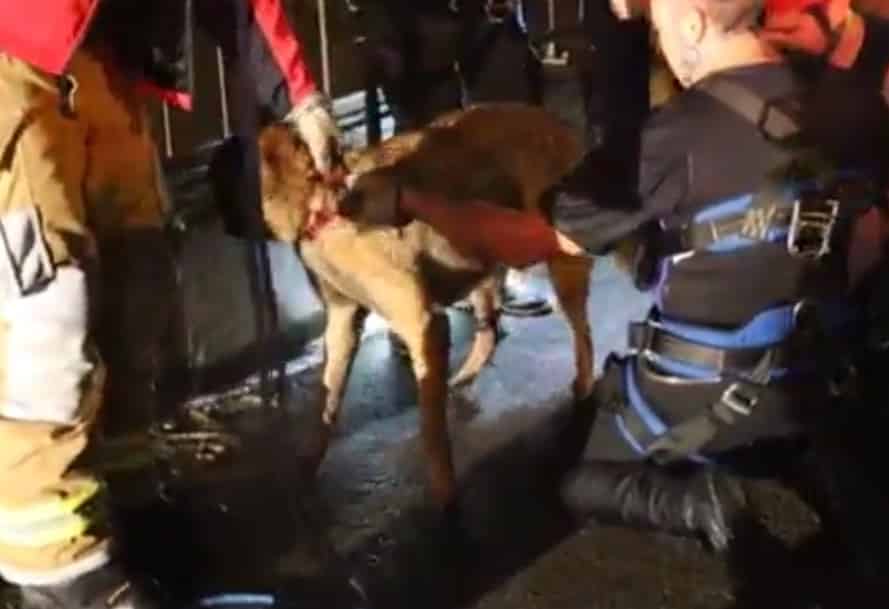 ‘The firefighter that had Duke on the leash walked back by the truck and, as soon as he saw me, he ran over, two paws right in the middle of the chest, jumped up and started licking my face’, said Pope. Did he recognize the man that saved his life? 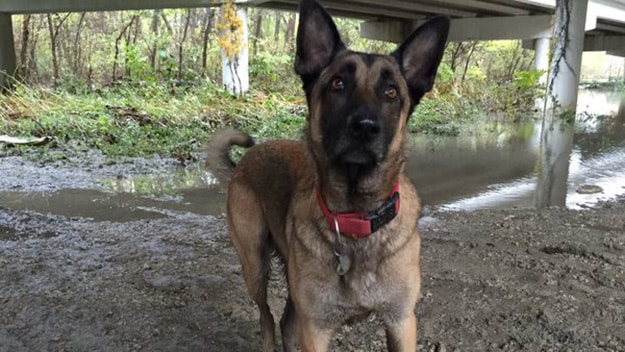 He was quite surprised because Duke ‘he recognized me, even though my appearance had changed and we had been separated for a few minutes’. More than getting thanked with a kiss, Pope also received an award… 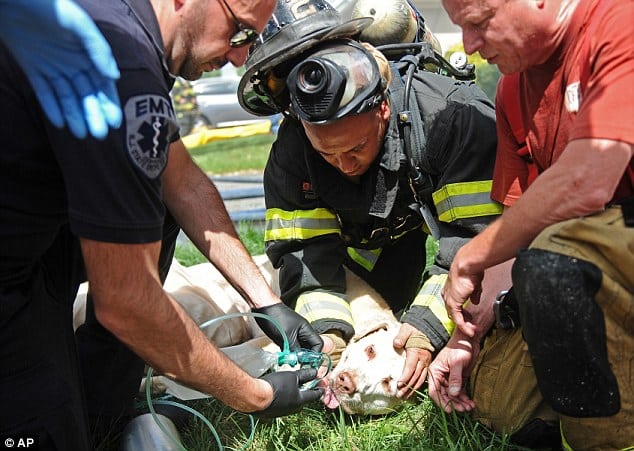 After finding out about the rescue mission at the McKinney Fire Department, PETA sent an award to the Fire Department for their brave mission: ‘PETA hopes their story will inspire others to come to the aid of animals in need.’ And it did…

5. Another Flood in Austin, Texas 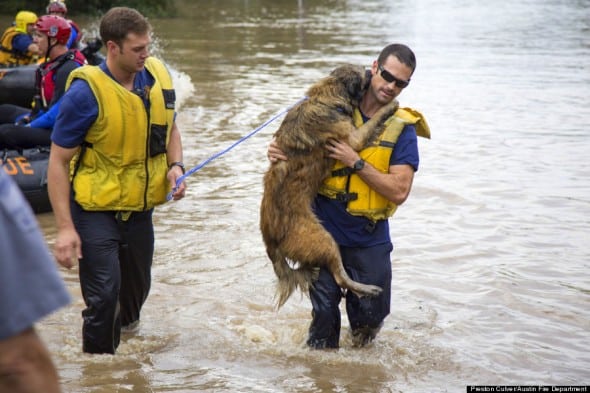 On the Austin Fire Department’s Facebook page, they posted these heart-melting photos, saying that they ‘don’t just rescue two-legged victims… we love our four-legged friends as well’. They saved a dog that was swimming and trying to stay alive…

4. The Poor Dog Was Alone 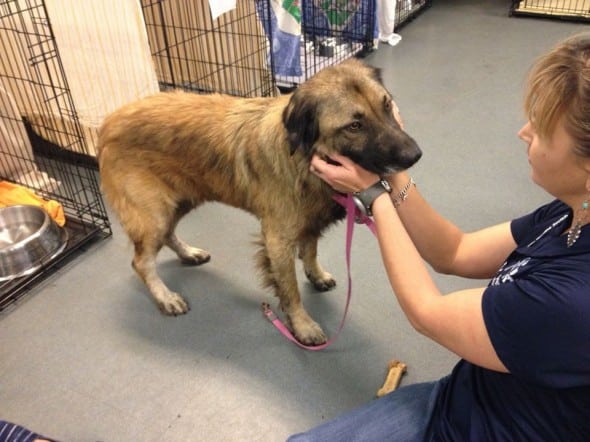 Battalion Chief Thayer Smith said that the ‘dog wasn’t with a family’. He wasn’t the only pet rescued. They were all sent to the local humane society, where they’ll stay until their families could be located: ‘thankfully, Panda has a microchip so they’ll be easy to track down’. 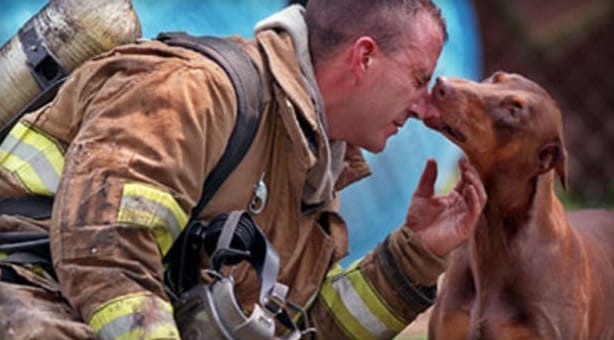 A very old rescue mission became famous over the years. You could call it the first puppy kiss for a firefighter. It happened in 1999 when a pregnant Doberman called Cinnamon was photographed licking a firefighter. 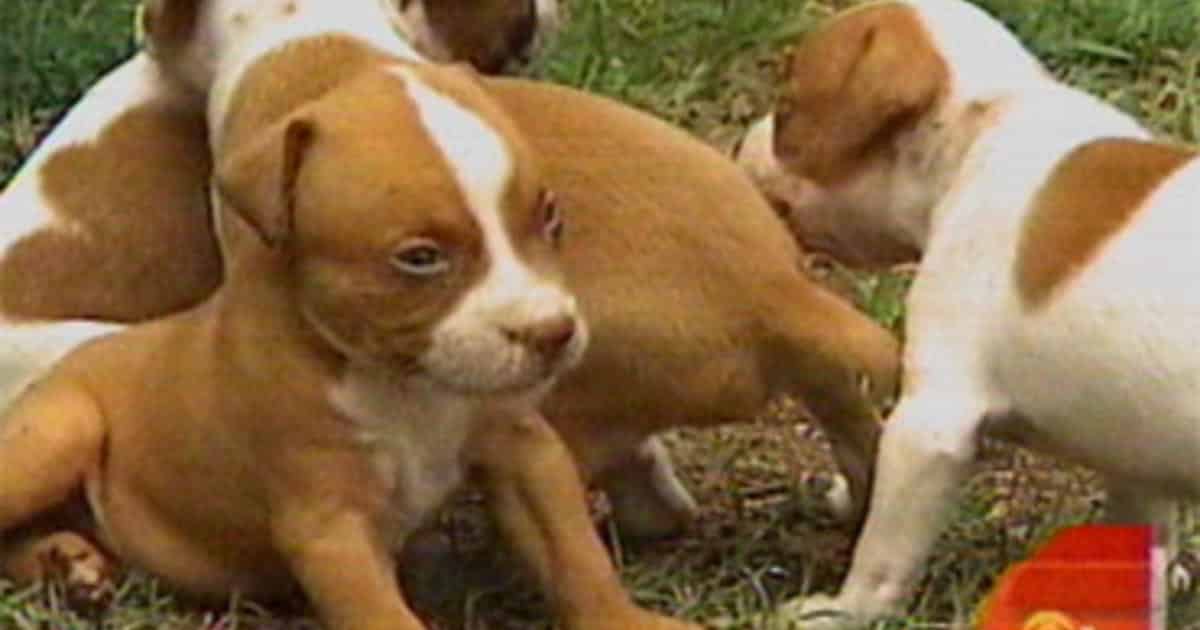 The firefighter, Jeff Clark, was exhausted after saving the family and her out of the fire. After he caught his breath, Cinnamon came close and started to lick him. A few years later, Jeff and Alan Haynes saved nine puppies from a house on fire! 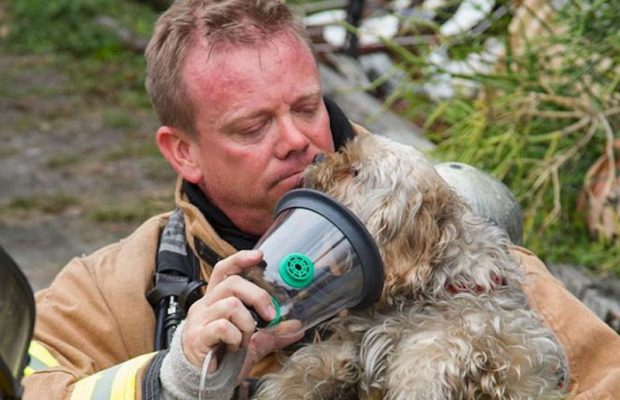 Being a firefighter is tough and very dangerous, but thanks to them, many people are still alive! We’re all thankful that they put their lives on the line for every living creature and the pets are also thankful, showering them with tons of kisses!