Injured Swan Hugs The Man Who Saved Him

There’s nothing more rewarding than seeing the animals you’ve helped rescue are now healthy and ready to go back into the wild. Well, Richard Wiese also got something more from one of the swans he’s helped at the U.K.’s Abbotsbury Swannery. It was a few years back when he was visiting the place. That’s when he encountered an injured swan and went to get some help. His story will turn into a real-life fairy tale, and we have the photos to prove it!

Nobody believed the swan will react this way! 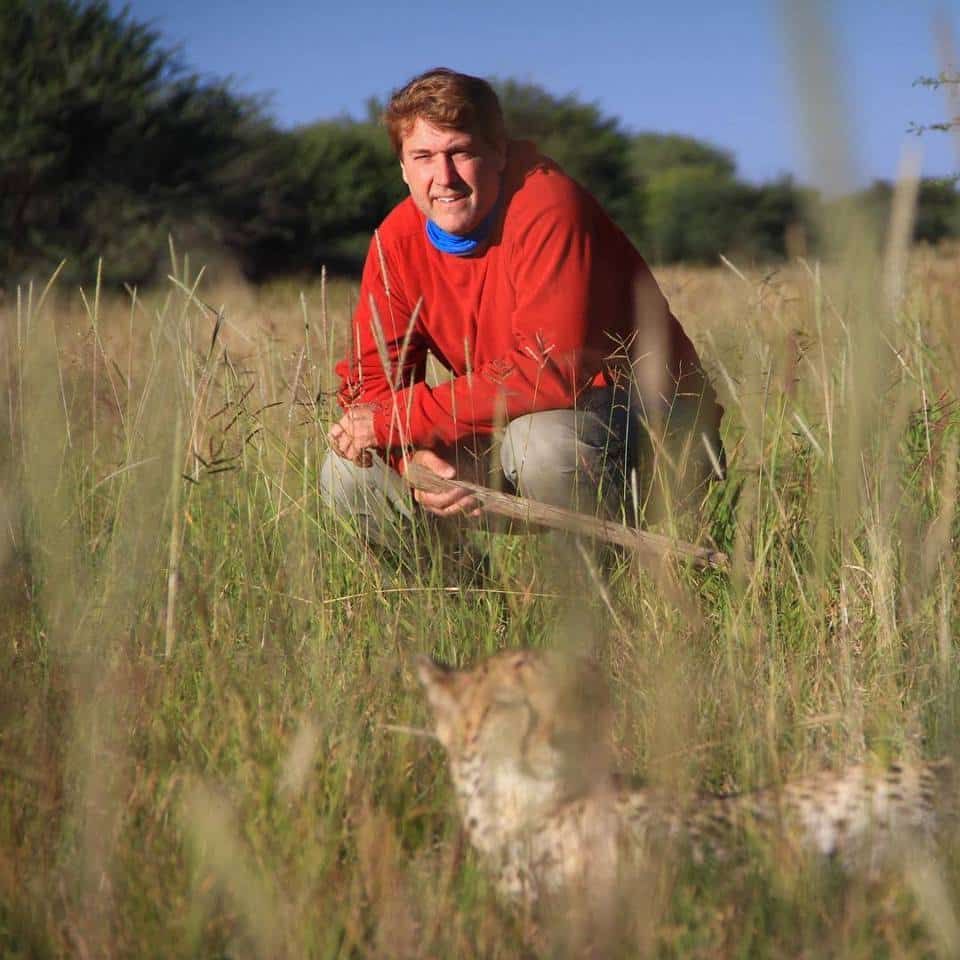 The host of the television show ‘Born to Explore,’ Richard Wiese, was on one of his visits to the Swannery. He knew everything about swans, especially that they’re territorial and quite fierce. But he never believed this would happen… 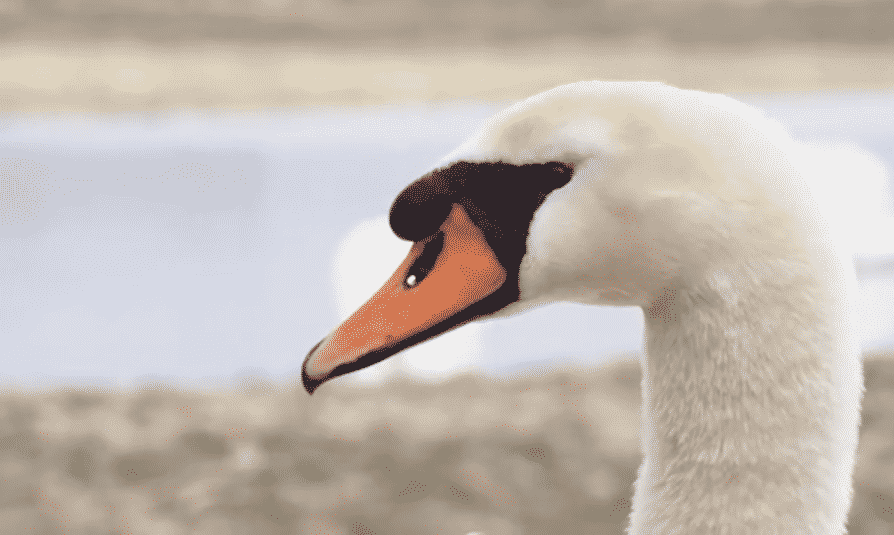 It’s no doubt that swans are among the most beautiful birds in the world, with their long necks and elegant posture, but there are some things that could make you back down when you see them. They are loud and they will attack intruders! 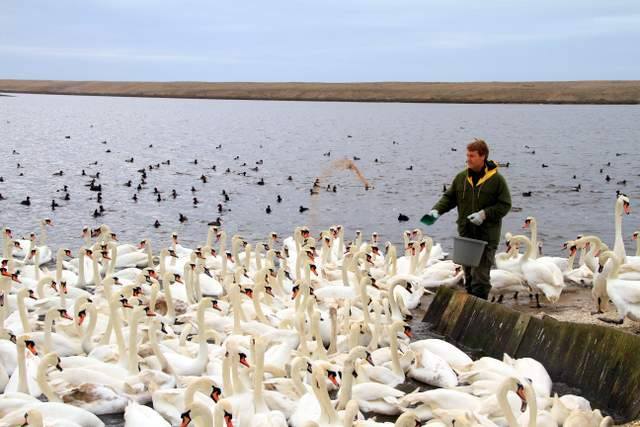 In a photograph on the ‘Born to Explore’ Facebook page, Richard tells the story of the Abbotsbury Swannery in Dorsett England. It shows him feeding the swans: ‘Lots of hungry mouths to feed […].’ You won’t believe what he says next!

17. The Only Colony in the World 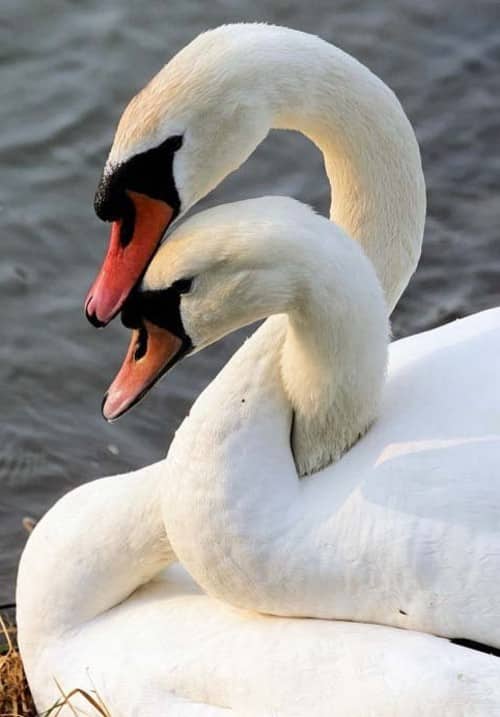 ‘It is the only managed colony of nesting mute swans in the world,’ said Richard. This is why, when he saw an injured swan on his way to the Swannery, he didn’t need time to react. He got close to pick up the bird and then…

16. It Flew Into a Chain-Link Fence 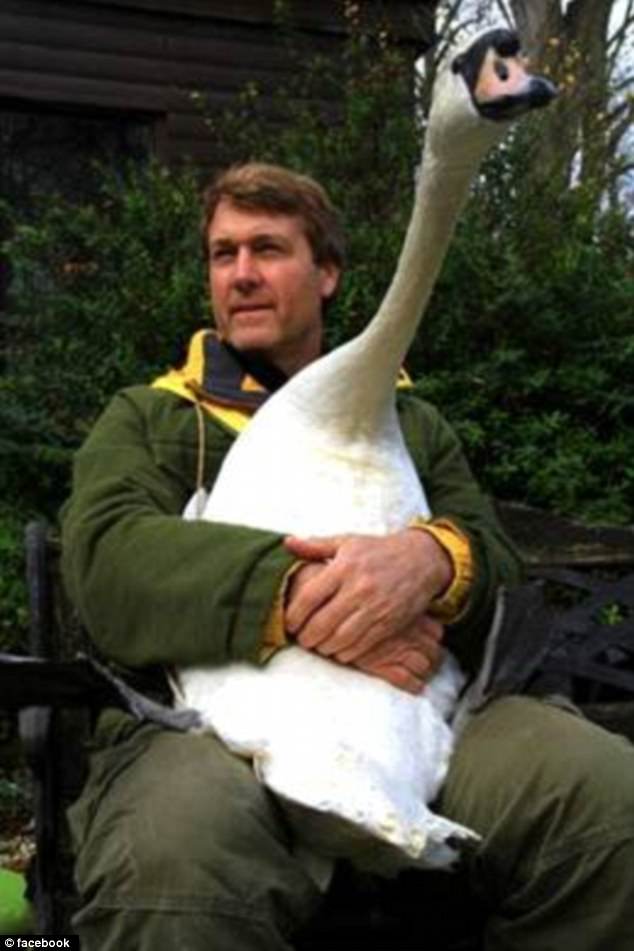 After its ordeal with the fence, the bird was exhausted and didn’t put up a fight when Richard got closer. He had to hold the bird for an expert to check the wounds. You won’t believe how the swan reacted! 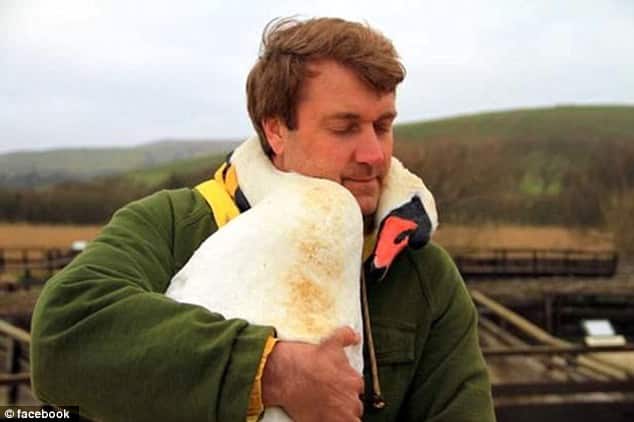 Richard was shocked to see the bird reacting this way: ‘I pulled it to my chest and somehow it felt comfortable or safe, and within minutes it just surrendered itself. It literally took its neck and wrapped it around mine’. What happened next is even more heartwarming… 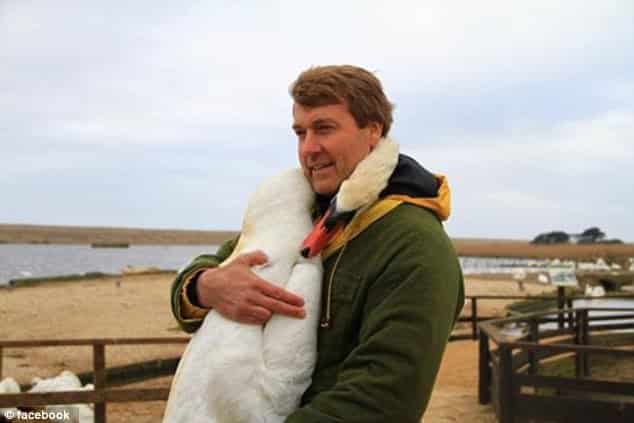 The whole scene has been captured on camera and everyone around the world was able to witness these touching moments. The bird not only showed trust, but it also showed gratitude for being saved. The next image will take your breath away. 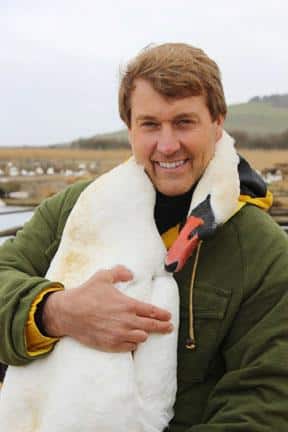 All Wiese was trying to do is make the bird feel comfortable and prepare it for transport, but his expectations were exceeded when the bird hugged him. Everyone there was shocked to see the swan’s reaction! This is what he said…

12. Two Hearts Beating Next to Each Other 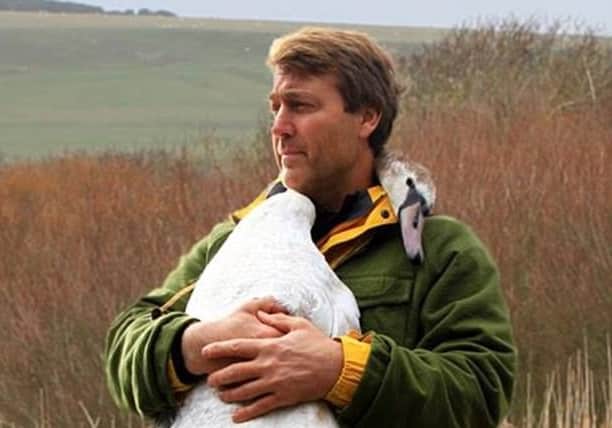 ‘When I put it next to me I could feel its heart beating and it just relaxed its neck’. He then continued his story, saying that ‘it’s a wonderful moment when an animal totally trusts you,’ and we can see it in the photographs how deeply moved he was.

11. Richard Wiese Knew All About Swans… 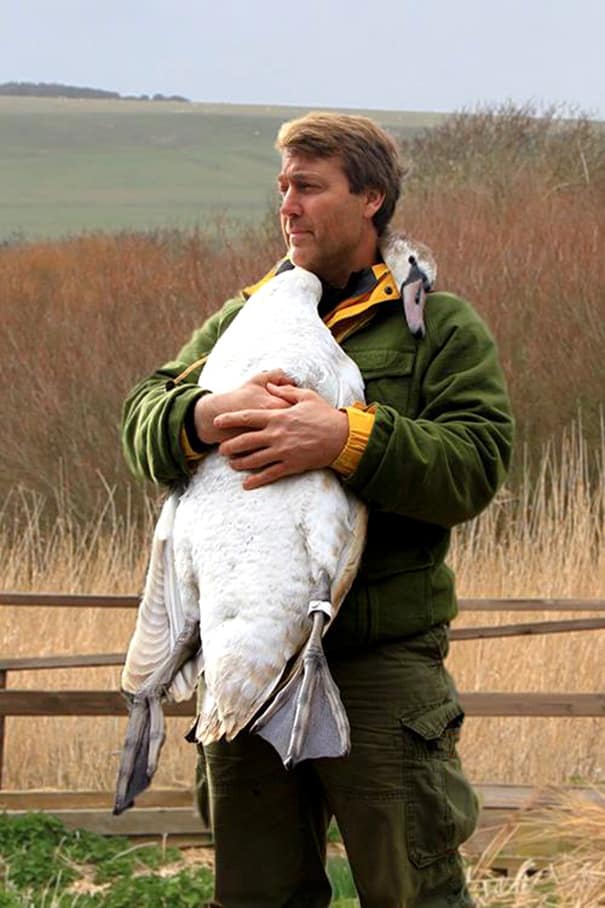 In one of the photos on Facebook, Richard said that the swans have a ‘reputation of being “mean” or “aggressive”’, but this swan knew ‘she was in caring arms’. What happened to the bird later? 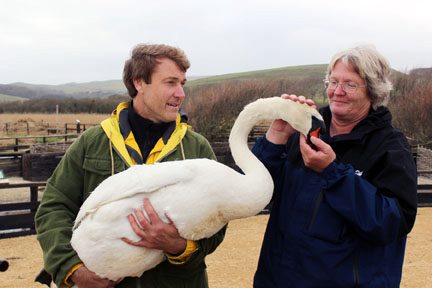 After saving the beautiful bird, Richard reported that ‘she was to delivered to Swan Lifeline’, which is a registered charity that will take care and treat injured swans in Windsor, England. The poor swan needed weeks of treatment…

9. Back Into the Wilderness 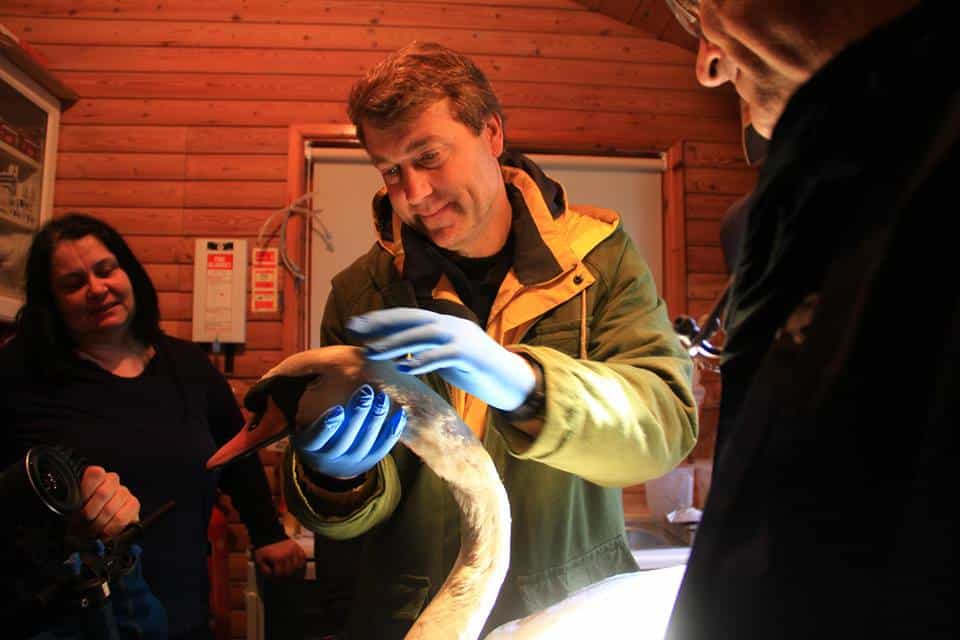 ‘After weeks of care I am happy to report she is back in the wild’, said Richard in another Facebook post. He was lucky to be of help to the Abbotsbury Swannery, which houses the largest collection of wild swans in the world and takes care of them. 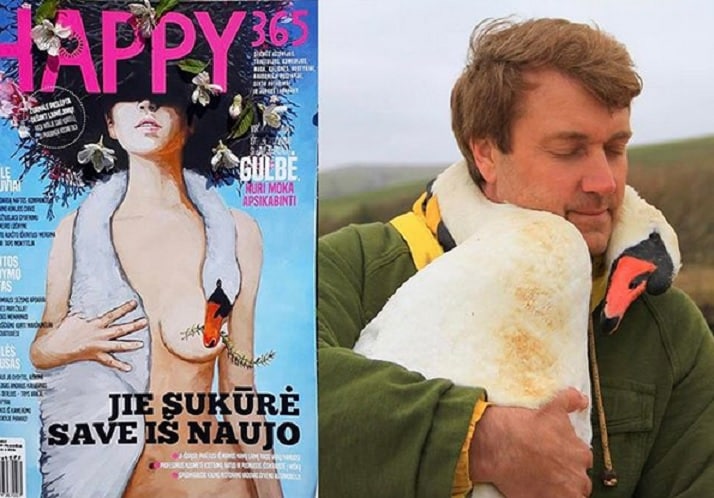 Richard Weise was happy to see that his awesome experience reached worldwide attention. On Instagram he posted a picture of him and next to it a cover of a magazine, bringing a tribute to his kindness. Everyone commented saying that he ‘wore’ it better! 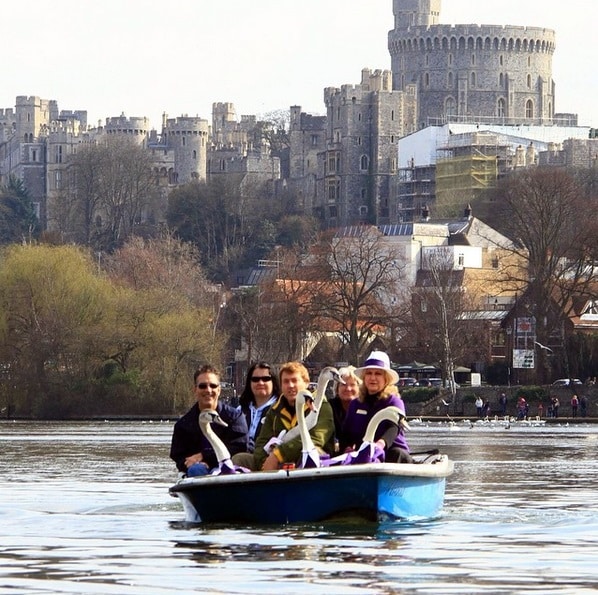 Looking as if they’re filming for a thriller, a rescue team with Richard Weise on board are ready to release 4 rehabilitated swans. The host of the TV show wrote on his Instagram page that the swans were cared for and were ready to go back home.

Thanks to the Regal Swan Foundation and Swan Lifeline, many swans have been rehabilitated and received treatment. They later returned the birds into the wild! The TV Show ‘Born to Explore’ continued its journey…

5. ‘Born to Explore’ with Richard Wiese 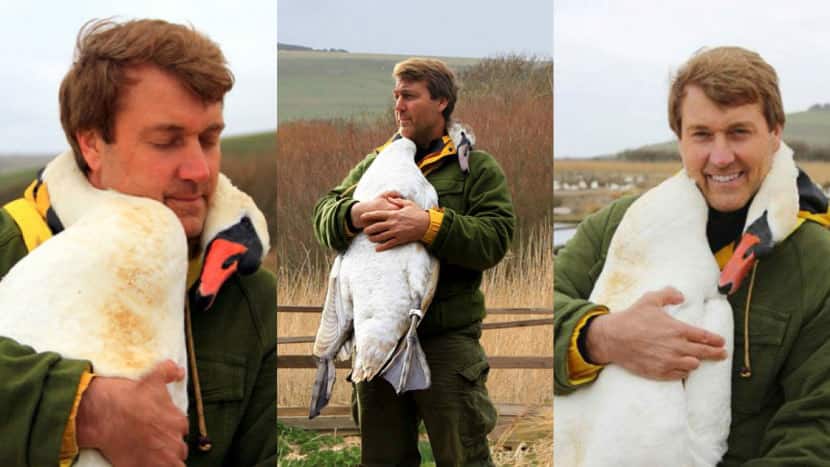 The TV Show has traveled around the world to see other types of birds. And that’s not all the hugs and love Wiese has received so far! Here are some incredible photos of him and other happy animals that want to cuddle. 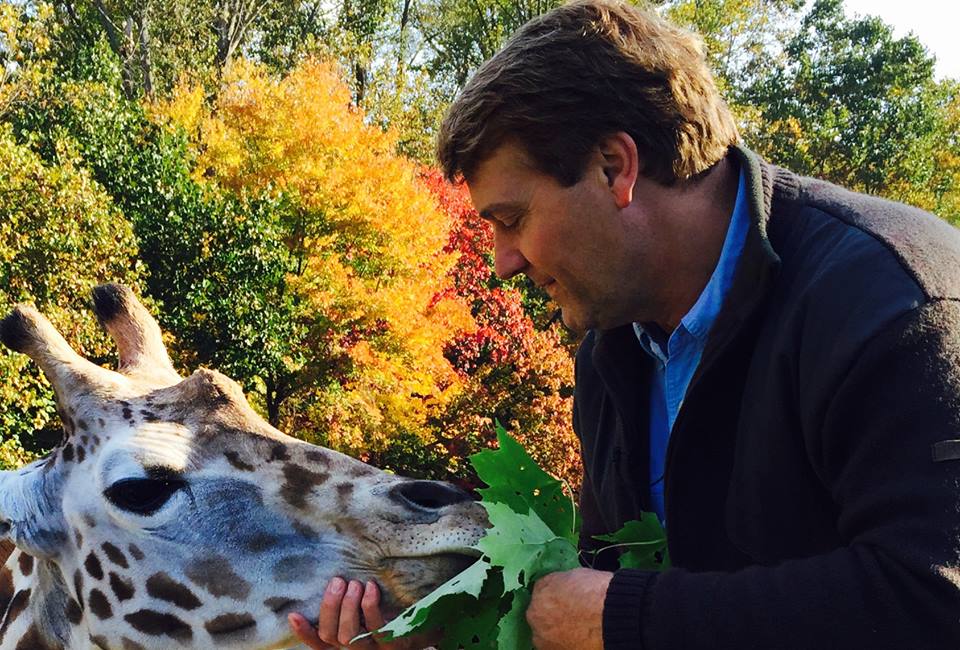 There’s nothing better than traveling the world and getting close to wild animals! This man is so fortunate to experience such moments! Check this next photo, where he gets a hug from a dangerous animal… 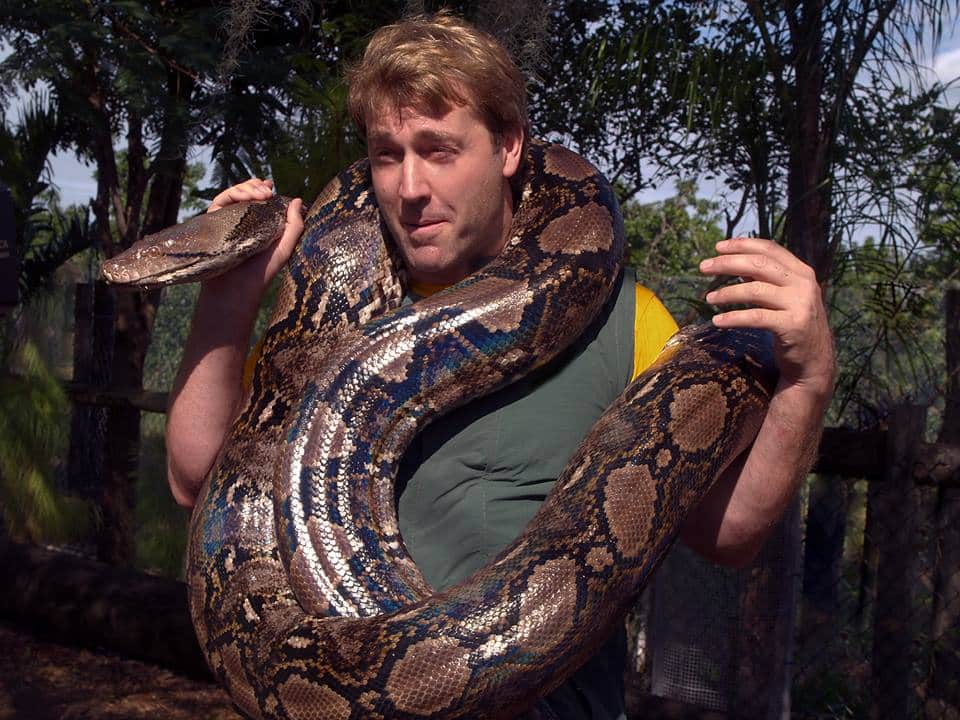 Not many people would crowd to receive hugs from a snake, but Richard was brave enough to do it! let’s go back to furry animals and see the next two cuddlers…

2.  Not Your Regular Puppy Love 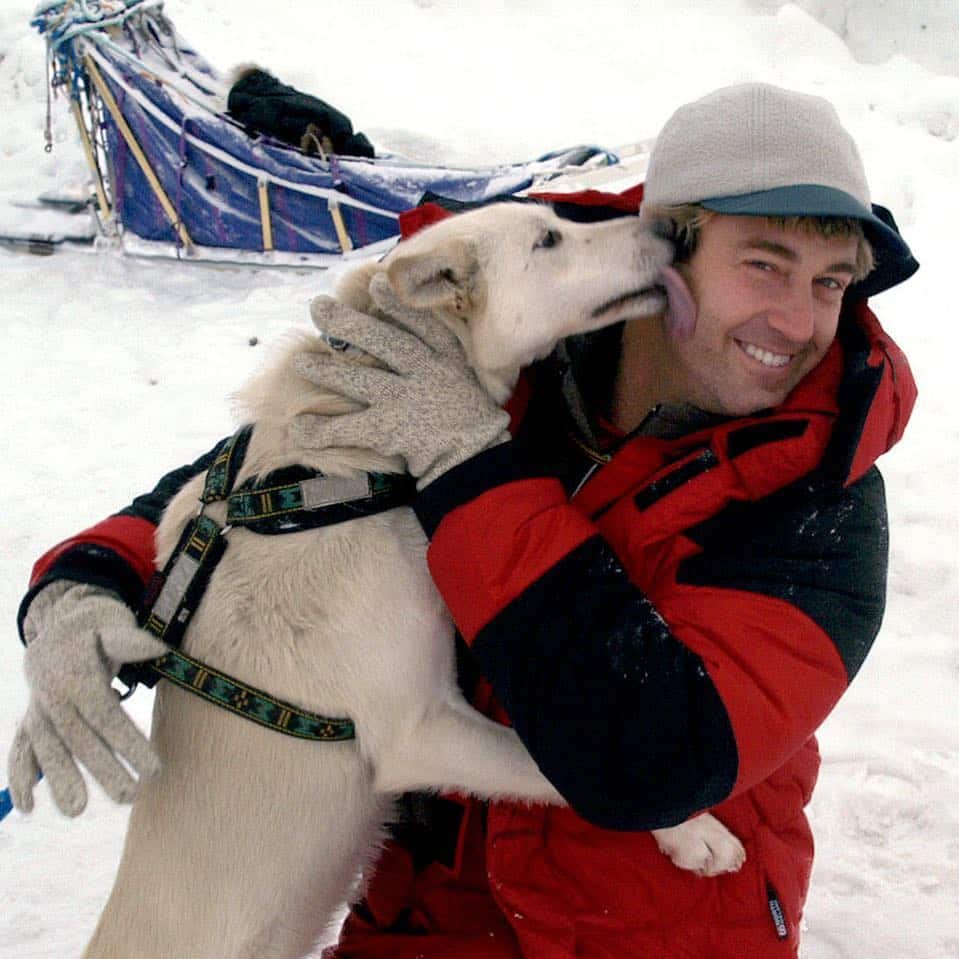 Your day is not great if your face hasn’t been kissed by a loving pooch! And if that’s not cute enough, look at this adorable baby. We’re in awe! 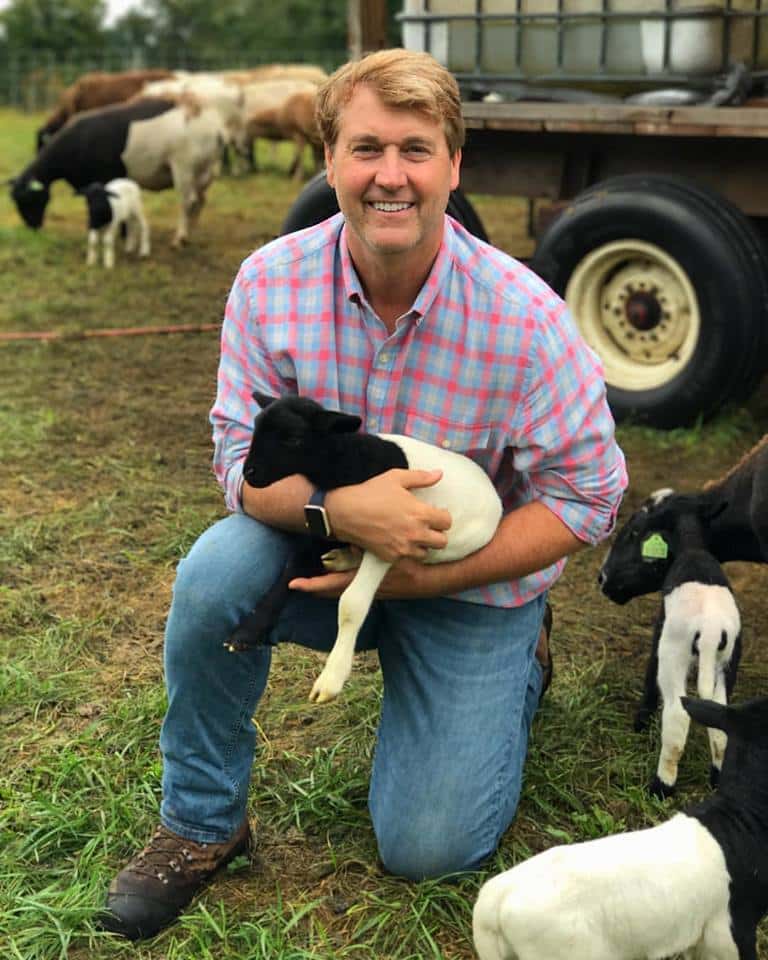 Richard Wiese has received so much love back after his kindness, and it surely is a once in a lifetime experience!

It filled everyone’s hearts with love when seeing him embraced by the swan! We need more people in the world that will not back down when it comes to saving animals!