What happens when you introduce a 30 kg lab retriever with two Siberian tigers weighing in at 360 kg?? Well, we’re about to find out! This is the story of a playful and warm-hearted rescue pup named Buda and his introduction to two massive Siberian tigers named Krishna and Paramesh. 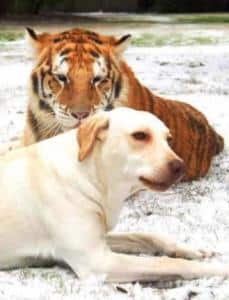 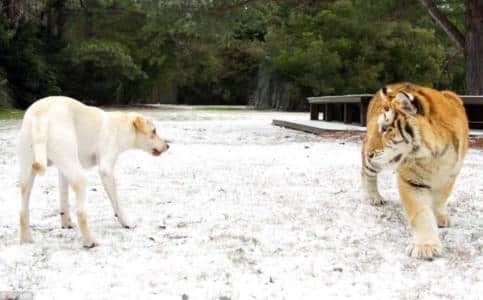 Buda, a young Labrador Retriever, is a rescue dog that was taken in my the Myrtle Beach Nature Preserve in South Carolina. The reserve had a soft spot for the abandoned pup and decided to give him a second chance. They quickly got him settled in and acquainted with the animals on the reserve. He took quite a liking to the two Siberian tigers at the reserve named Krishna and Paramesh.

Although, there was one concern at first… 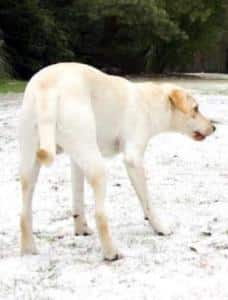 Although Buda was a little shy at first, he quickly came out of his shell once he got to hang out with the tigers separately and get to know them one-on-one. 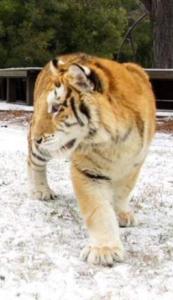 Krishna was the bigger of the two tigers and had a much deeper rust orange color than her lighter colored sister, Paramesh.

After eyeing Buda for some time, Krishna began to open up to Buda. 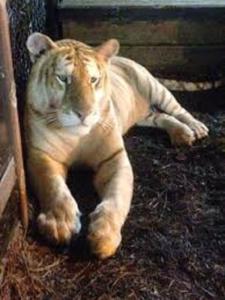 Paramesh is the younger of the two tigers and is very playful. She would make the ideal playmate for the young and rambunctious Buda.

She may look pretty low-key and relaxed now, but you’ll think she’s a totally different tiger once you see what she’s doing in #12! 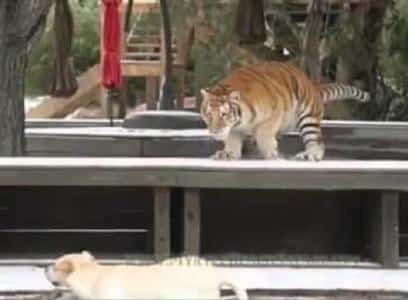 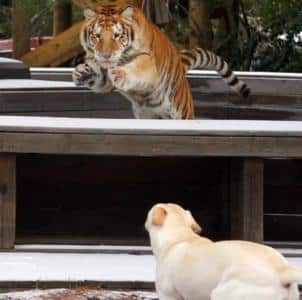 It didn’t take long for the trio to start chasing each other around like cats and dogs do! Can you imagine watching these massive Siberian tigers jumping and pouncing around like kittens?!

Just wait until you see them really get going! 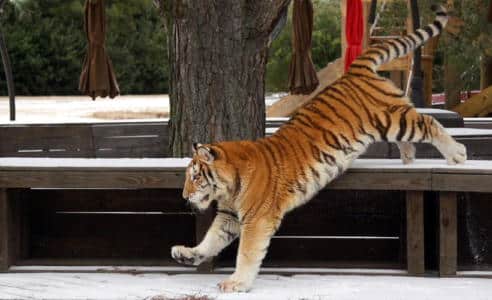 Zoologists at the reserve were amazed to witness the tigers playing and interacting with Buda the way they were. The tigers appeared more youthful than before, as if they were 10 years younger. 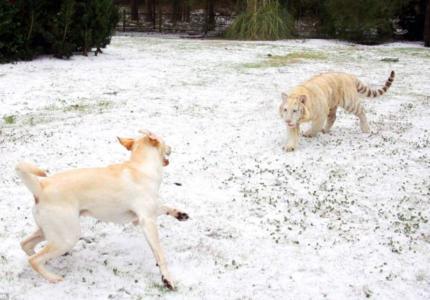 South Carolina rarely experiences snow, so on this particular day Buda and his friends Krishna and Paramesh were giddy to see the fresh blanket of white stuff all over their play area. This got them even more riled up than usual! 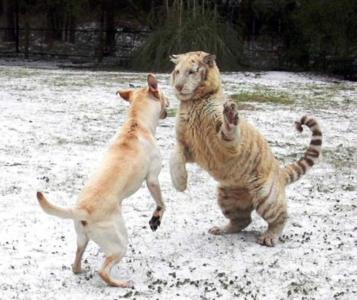 It’s not unusual to see the trio horsing around like this during playtime. They play fight all of the time and even though the tigers have a huge weight and power advantage over Buda, Krishna and Paramesh are very gentle with him.

Plus, Buda does have one advantage of his own… 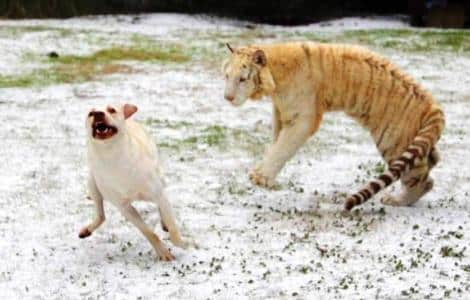 Just when Paramesh thinks she’s got Buda pinned, he takes off like a shot! Labrador Retriever’s absolutely love to run and Buda shows off just how fast he is.

Just look at this face as he makes his escape: 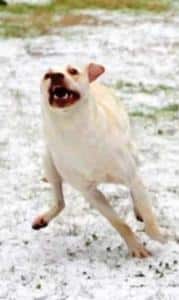 Now this is a pup that is having the time of his life! It’s probably safe to say that the Nature Preserve was right in believing that Buda would make the perfect buddy for their tiger pair.

While Buda seeks the thrill of being chased, Krishna and Paramesh absolutely love trailing him around their pen. Check out the hunter pouncing after Buda: 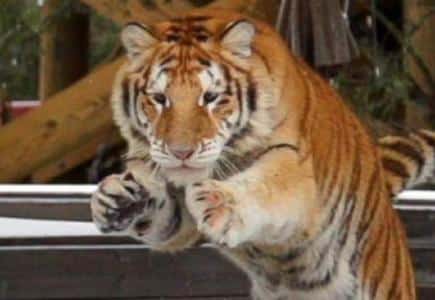 Krishna loves to lounge around on her platform in their play area, but Buda can easily tempt her with play. Watch out Buda! She’s about to pounce! 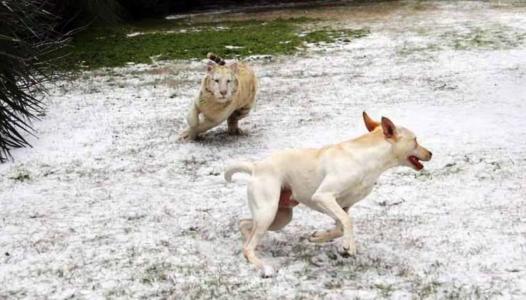 The trio just can’t seem to get enough of each other. They really know how to have fun and the nature reserve has done an excellent job documenting the shenanigans these three get up to in pictures.

Take a look at these two flying through the air after each other: 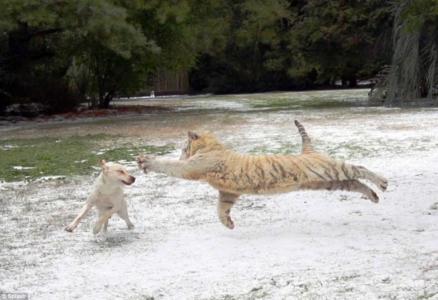 It’s a bird… it’s a plane… it’s Paramesh the super cat flying into action with Buda the dog! You just can’t help but smile looking at these two goofballs, can you?

After so much fun and play, you’ve got to imagine that these animals must be tired from all of the activity. And they sure are!

Look how exhausted they are sprawled out in the snow together: 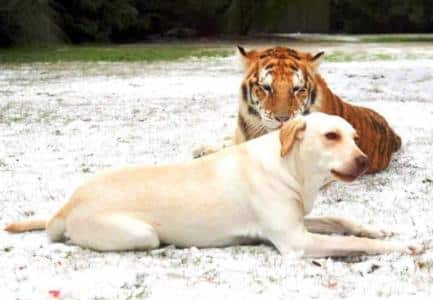 It’s amazing how the most bizarre combinations of animals manage to become such close friends. The bonds that develop between them are really something to be witnessed. They teach us that love and friendship can blossom between the most unlikely of beings.

We hope that you’ll stick around and join us as we take you through more of the top “odd animal” friendships! Let’s check them out:

5. Lions and Tigers and Bears, Oh My! 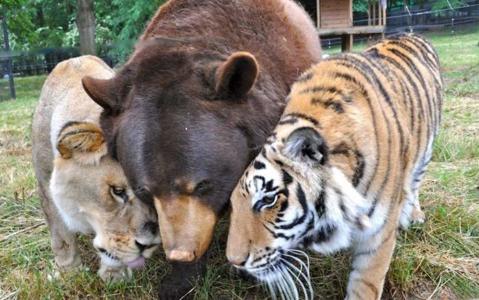 If you thought that this trio only existed in the Wizard of OZ, think again! There’s no wizardry here. These three are actually great friends!

And if you’re a fan of Disney, we’ve got another animal pairing that will make you feel like you’re in fairytale land:

4. The Fox and The Hound 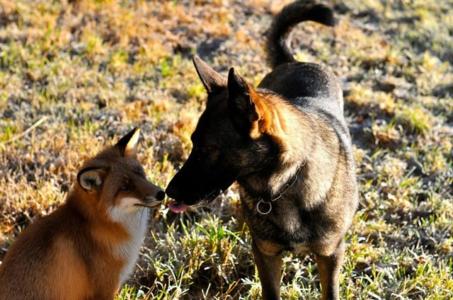 That’s right, just like the classic Disney film the Fox and the Hound, these animals found each other and became the best of friends! Who knew cartoons could come to life!

Next up is a friendship of epic proportions! Just wait, you’ll see 😉 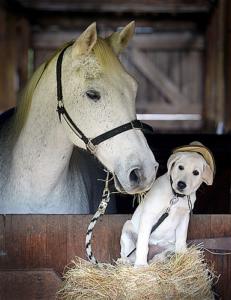 Although there’s a massive size difference between these two, nothing is stopping them from being the best of friends.

Have you ever witnessed animals hugging? You’re about to! Check this out: 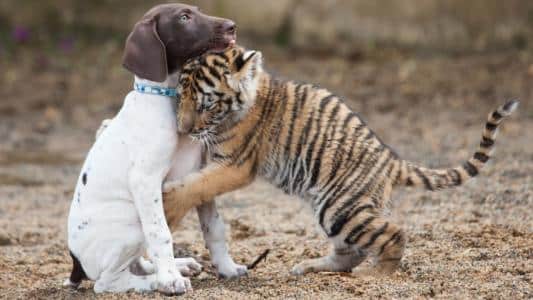 Well, maybe it’s not exactly a hug that this wee tiger is leaning in for. It looks like he’s ready to play! Either way, is this not the sweetest thing you’ve ever seen?!

One thing’s for sure, this next pair really knows how to give great hugs! 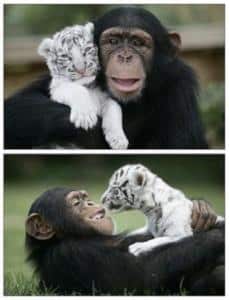 Thanks for joining us today! We hope that you’re day has become a little bit lighter and a whole lot brighter after taking this journey with us through a bizarre, yet heartwarming story of odd and unimaginable animal friendships.

Hope to see you again soon! 🙂