These Soldiers Adopted An Orphaned Bear Cub, Unbelievably He Turns Into A World War II Legend

In 1942, The Anders Army, a Polish military unit were deployed to the Middle East to join the Allies during World War II.  At their first stop, Iran, they made a decision that would create one of the greatest legends of World War II.

This fiction-like real story depicts how an orphaned bear cub went on to help turn the tides for Allies forces in WWII and how a little cub was molded to serve as a Corporal in the war. 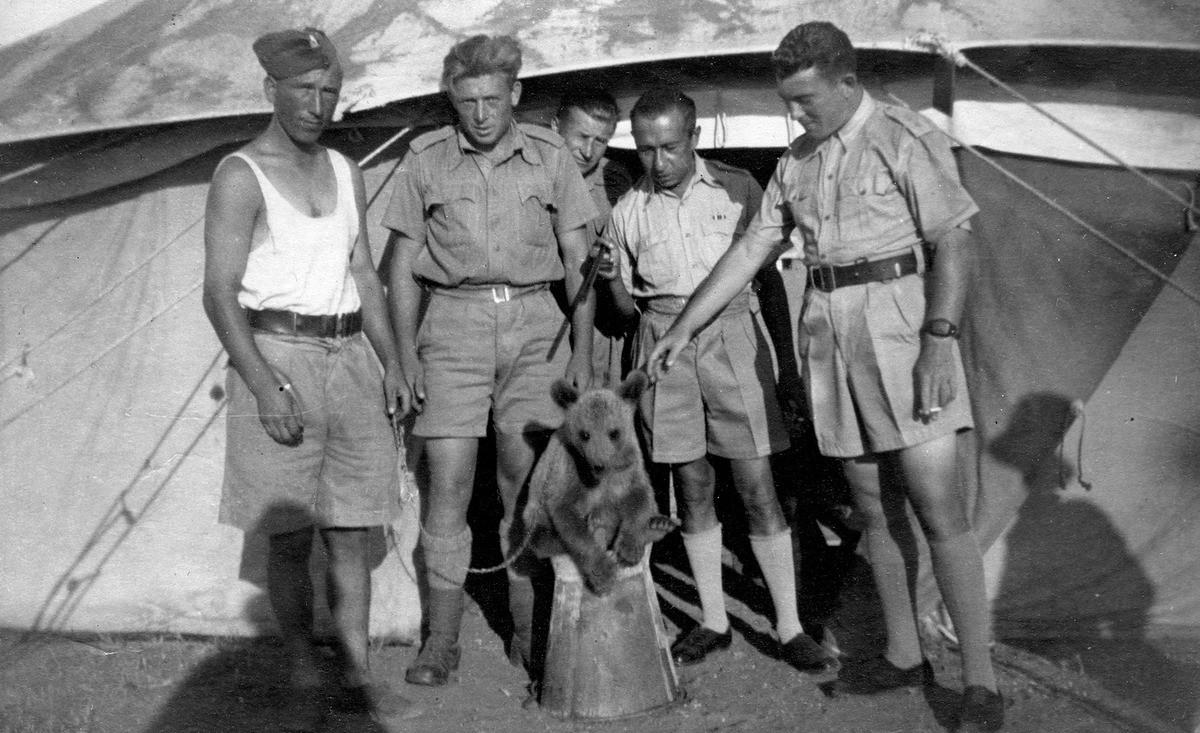 The Polish soldiers marching on their way to Iran’s capital, Tehran, met a young boy carrying a very unusual item in his bag – a Syrian brown bear cub!

According to him, he’d found the orphaned cub after its mother was killed by hunters. Irena Bokiewicz, a beautiful Polish woman who was traveling with the soldiers instantly fell in love with the bear cub. This made Lieutenant Anatol Tarnowiecki buy the bear cub for her on the spot!

19. Travelling with the Unit 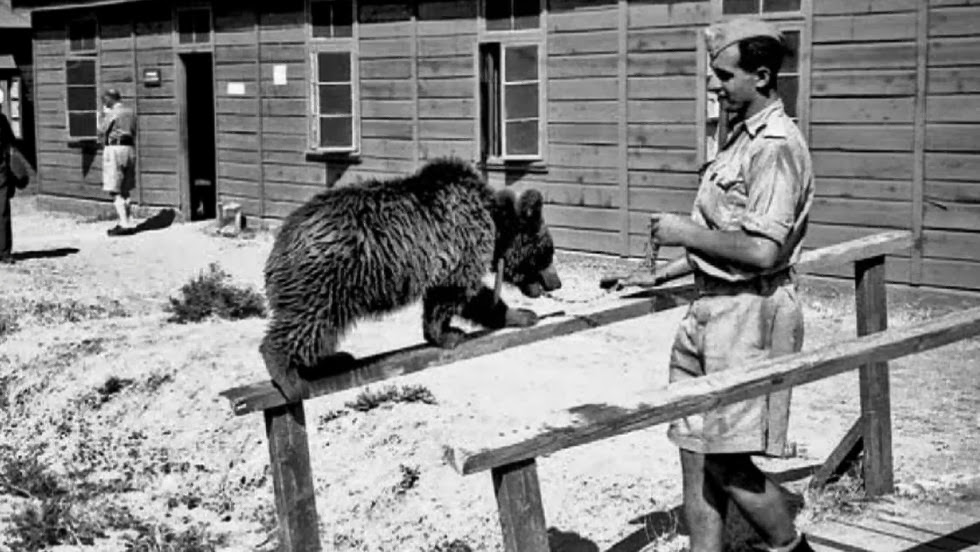 During World War II, nothing was stationary and military units were just relocated frequently according to the war demands. The unit was ordered to switch from Iran to Iraq. The  Polish soldiers didn’t let go the orphaned bear cub and took him along with them to Iraq. 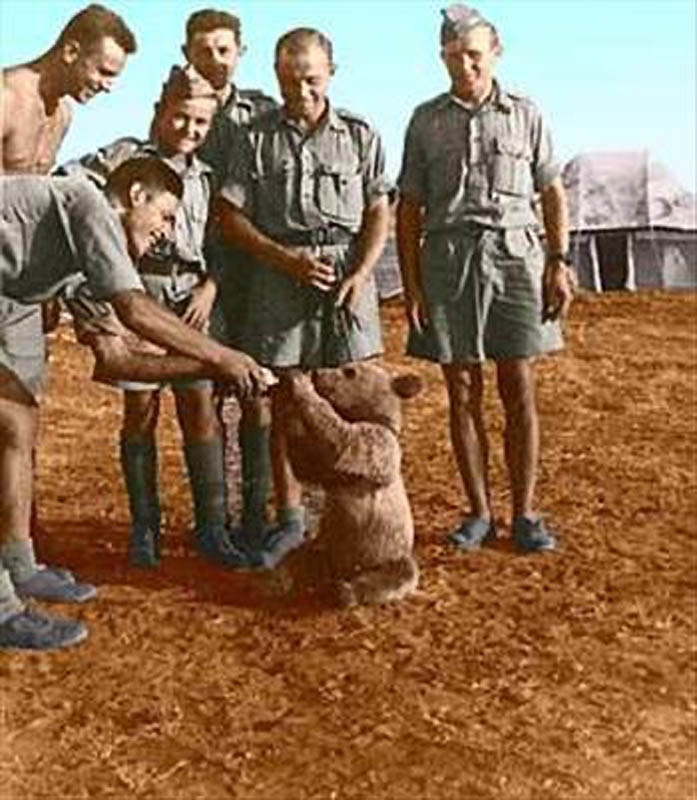 The cub showed great trust in the unit. At first, the soldiers used to offer the cub condensed milk out of an old vodka bottle. As he grew bigger, they started cadging food from their rations and fed him with fruits, marmalade, honey, and syrup. 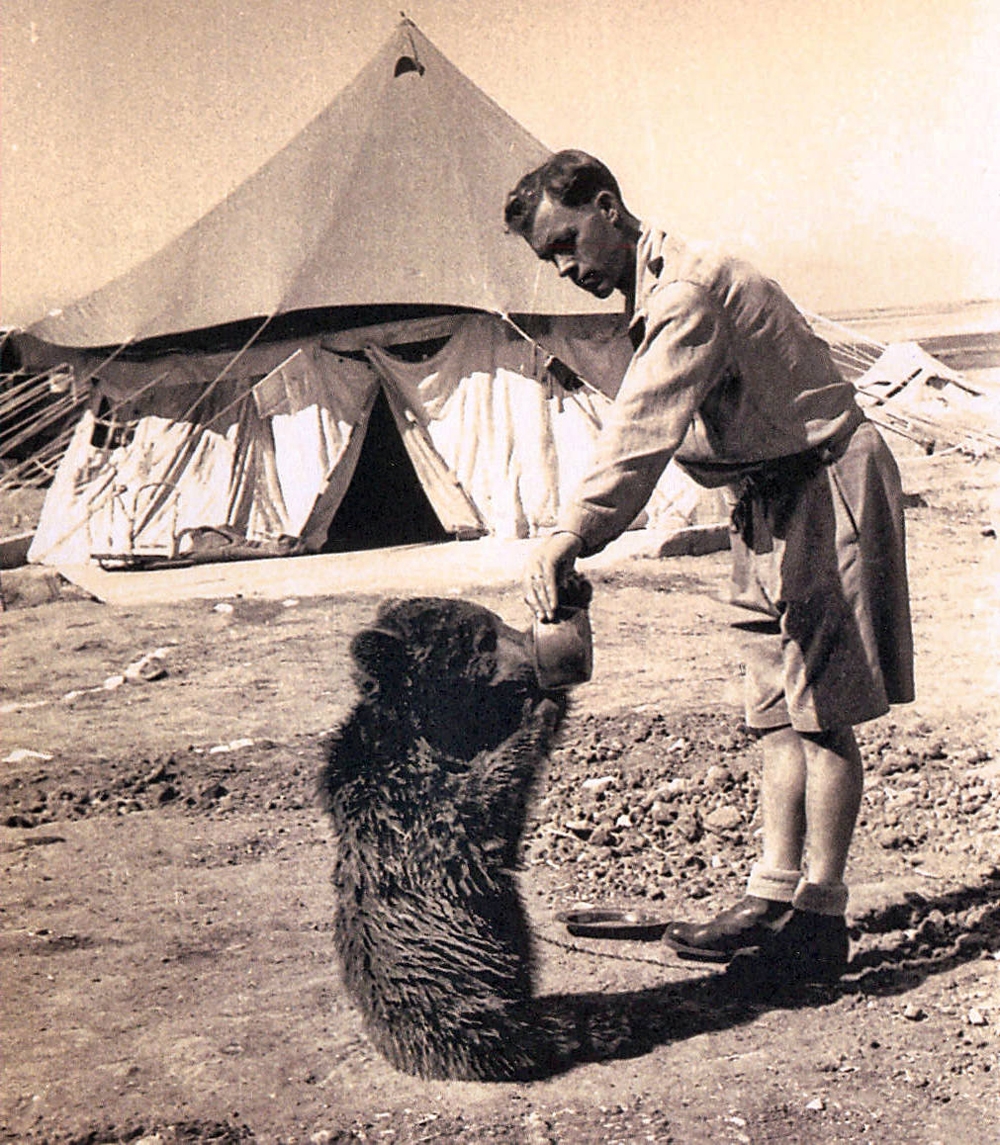 The unit soon realized that the cub’s nutritional requirement is increasing really fast and allocated him a soldier’s full ration. But as he got bigger and bigger, they quickly switched to allow him two full rations! 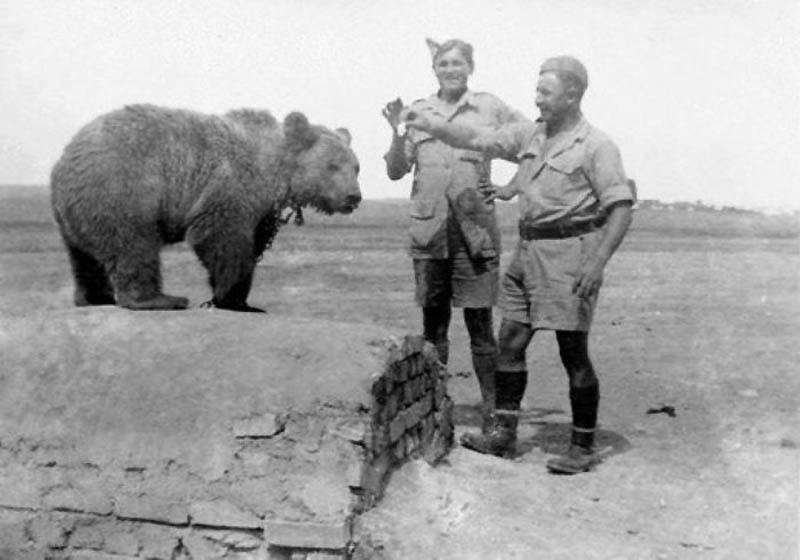 The cub was named Wojtek, an old Slavic name that means “he who enjoys war.”

In some official documentation, Wojtek was also called as Wojciech Perski.

In Polish language, Perski means “Persian”. So, the bear was named as the Persian Who Enjoys War! 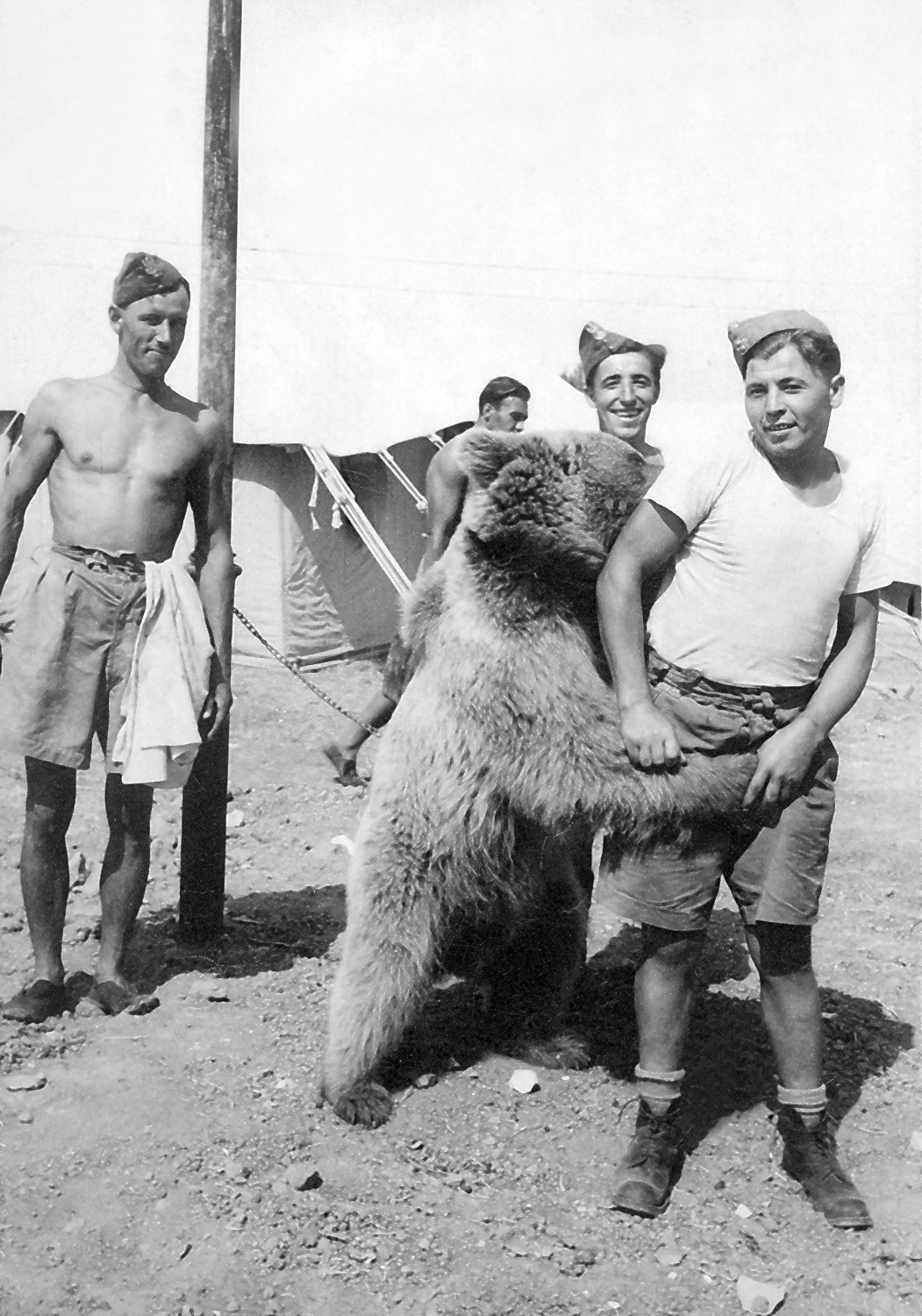 The cub grew bigger and bigger, but remained very tame and jelled in with the soldiers really well. He trained together, slept together, ate together.

News about Wojtek started spreading like wildfire and he soon became the unofficial mascot of all the troops stationed in the area.

14. Those who Stay together, Drink together! 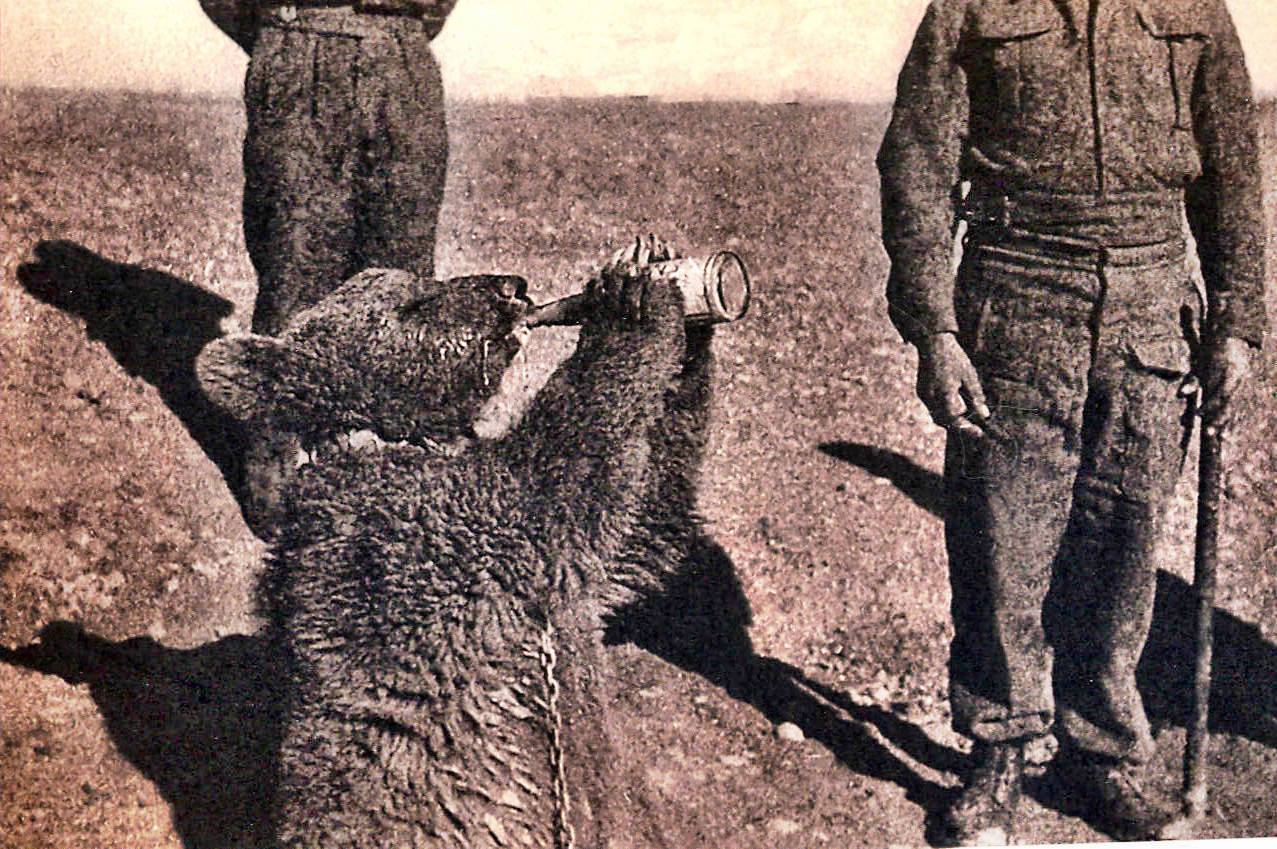 One of Wojtek’s favorite things was drinking beer with his pals. The soldiers even trained Wojtek to salute by rewarding him with beer!

The soldiers claimed that they even taught him to smoke cigarettes, but Wojtek used to often eat them instead of lighting up. 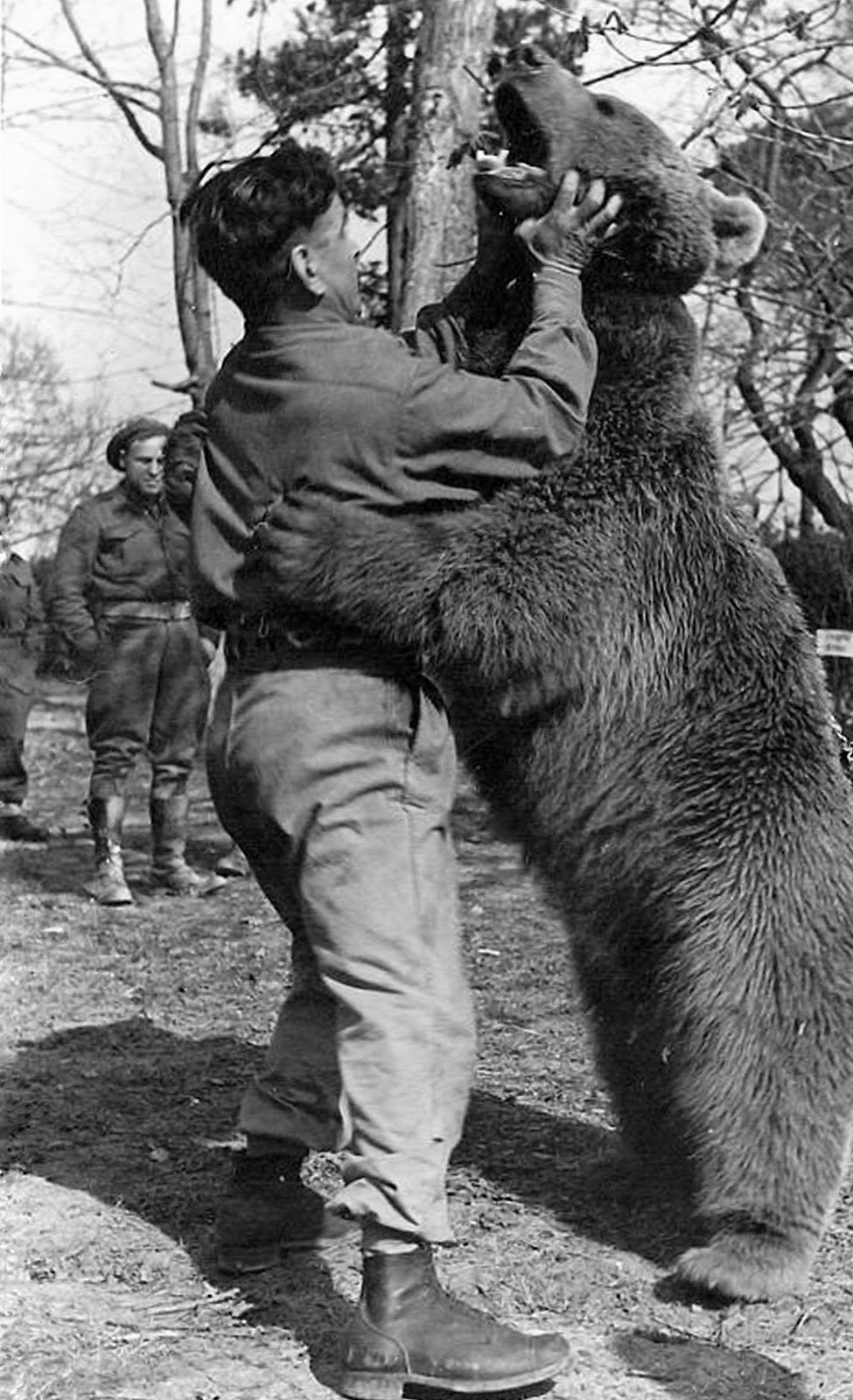 The other favorite thing of Wojtek was to wrestle with the soldiers. There are a surprising number of photographs in which Wojtek was wrestling with his soldier pals.

The Polish soldiers proudly claim that Wojtek never hurted them during their wrestling sessions. 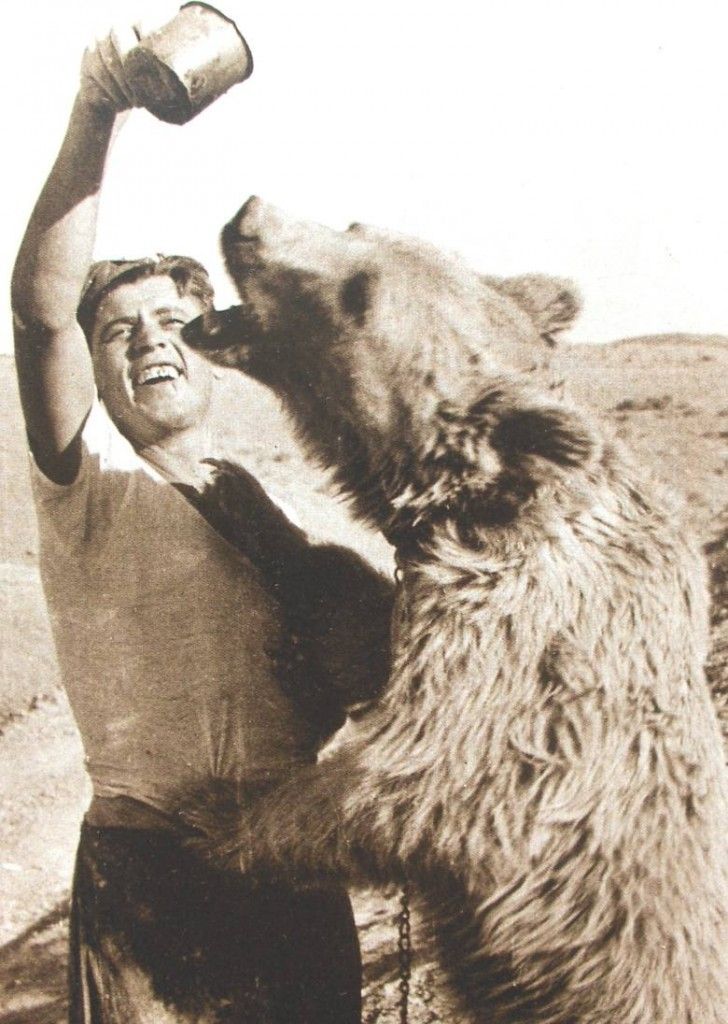 Wrestling and beer, it couldn’t have gotten any better for Wojtek!

This guy certainly doesn’t look worried, even though the massive bear is just around his chest!

11. Time for a Tough Decision

Wojtek traveled from Iran to Iraq, Syria, Palestine and Egypt with the unit.

But happy days don’t last forever and the crew was ordered to depart to Italy to support an invasion effort for the Americans and the British 8th Army.

The Polish soldiers got afraid that they would have to leave Wojtek behind and it was time to part ways from their unique best friend.

What decision was taken? Find on the next slide>> 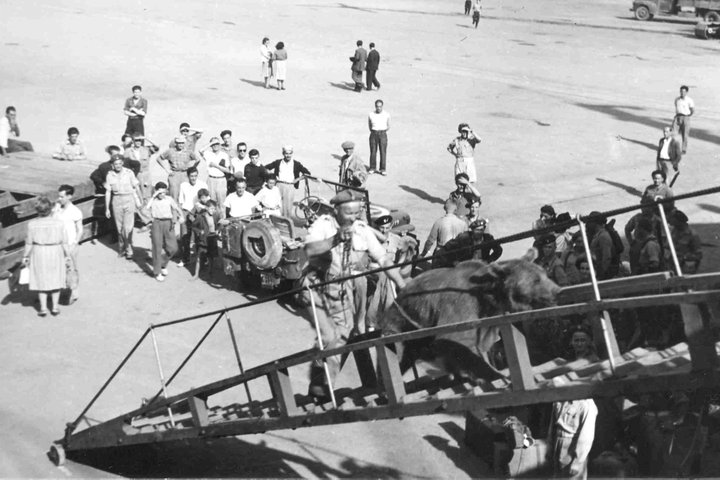 The soldiers worked fast to get Wojtek officially included into the Polish Army. He was drafted in with the rank of private.

Here’s a pic of Private Wojtek, boarding the ship that would take the Polish troops to Italy!

9. Really turning into a Soldier 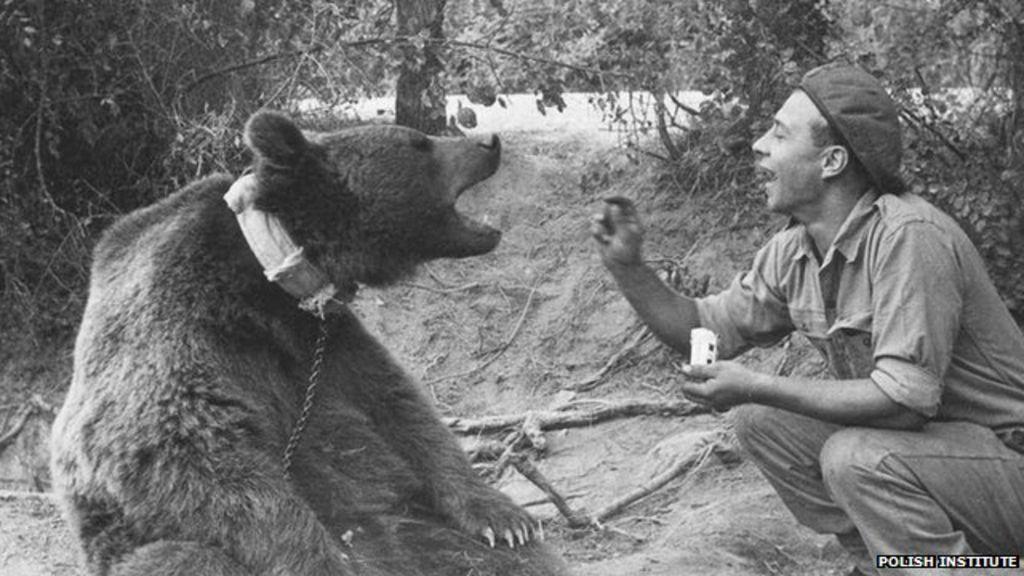 As an enlisted soldier, Wojtek was given his own paybook, his own rank and serial number.

Wojtek lived with other soldiers in the tents, ate with them in the mess and drank together at night.

Now, It was time for Wojtek to repay the love showered by the Polish Army on him and contribute in the battlefield. 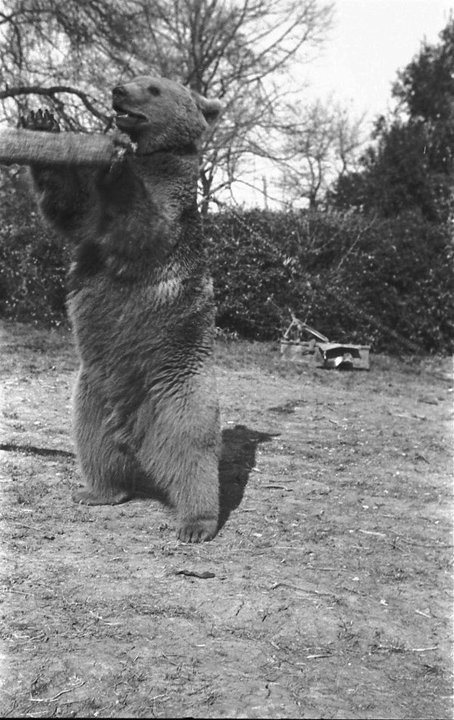 Wojtek got the chance to prove his utility as a soldier in the Battle of Monte Cassino in 1944.

The troop used his immense strength to carry the heavy boxes of artillery shells in rough terrains. The boxes weighed over 100 pounds each and it helped the soldiers by taking the assistance of a 450-pound bear! 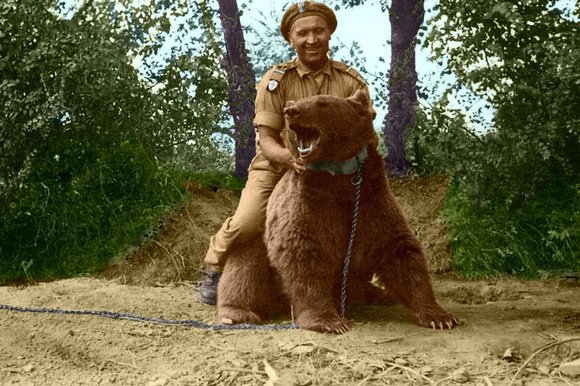 The Allies won the Battle of Monte Cassino. The contribution of the Polish Army was so pivotal in the battle that the Polish flag was the first to be raised. So Wojtek’s contribution didn’t go in vain!

6. Recognition from the Allies 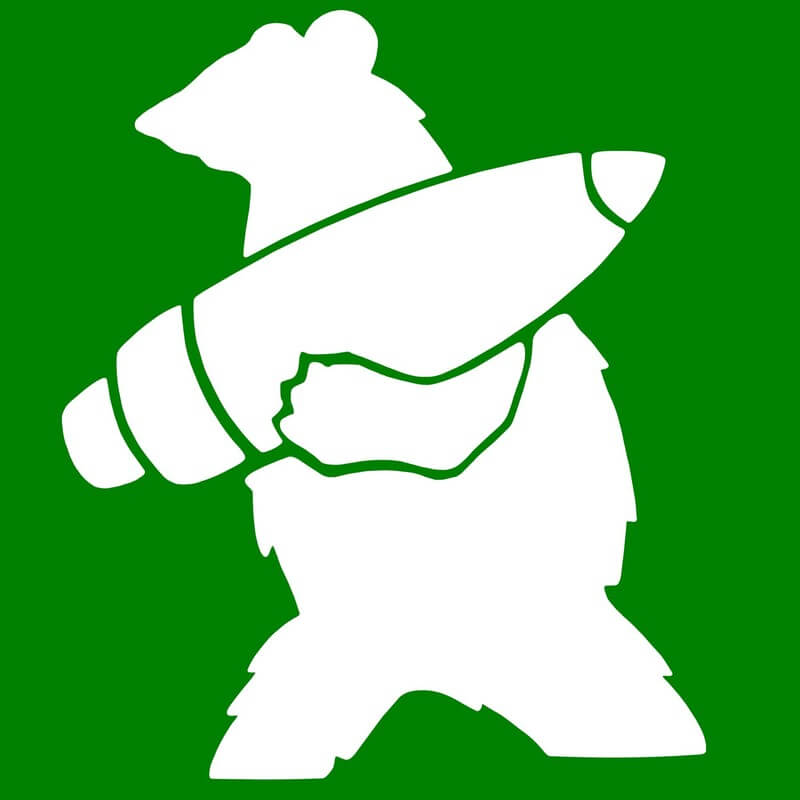 Wojtek’s contribution in this battle made him a celebrity among the Allies. When the Allied generals and statesmen came for a visit, they were so impressed by him that they approved the creation of a new emblem for the 22nd Company, dedicated to Wojtek, it was a bear carrying an artillery shell. 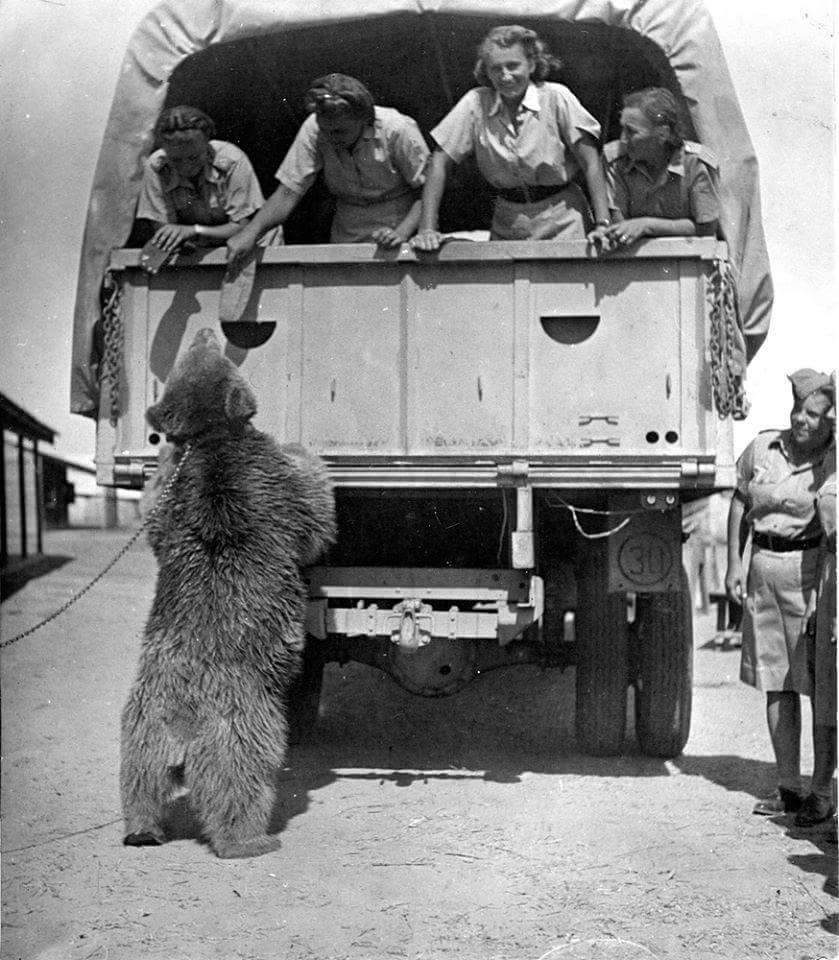 Once the battle was won and the war calmed down, the 22nd Company was departed to Berwickshire in Scotland. Wojtek went with his fellow soldiers to live in a barrack. 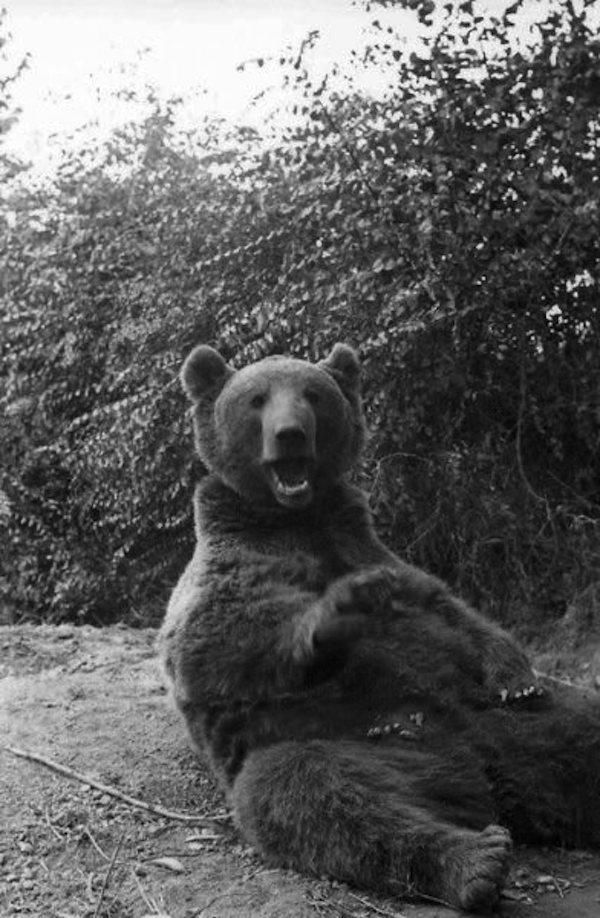 Wojtek was promoted to the status of corporal by the end of the war. A large portion of his company decided not to return to a Soviet-controlled Poland and Wojtek then stayed with his fellow soldiers in Scotland.

The fact that a bear served in an important battle victory made headlines in Scotland and Wojtek soon became popular among local civilians and the press.

The Polish-Scottish Association gave Wojtek the accreditation of one of its honorary members, But Scottish Federation rules were different and it didn’t allow a bear to live freely in civil areas.

3. A Former Soldier Retiring At The Zoo 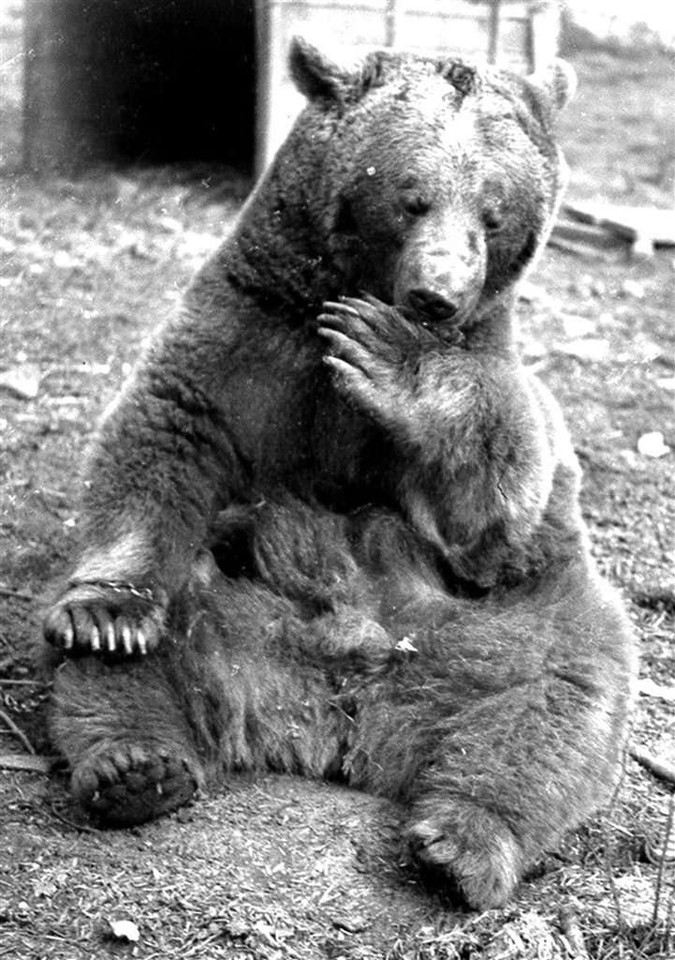 The troop decided not to take Wojtek back to a Soviet-controlled Poland and asked the local Edinburgh Zoo if they can accommodate their beloved pal till they get freedom.

During Wojtek’s time at the Edinburgh Zoo, the troops would visit him frequently, talk with him and toss cigarettes towards him.

The zookeepers claimed that whenever Wojtek heard anyone speaking in Polish language, he cheered up!

2. A hero passed away 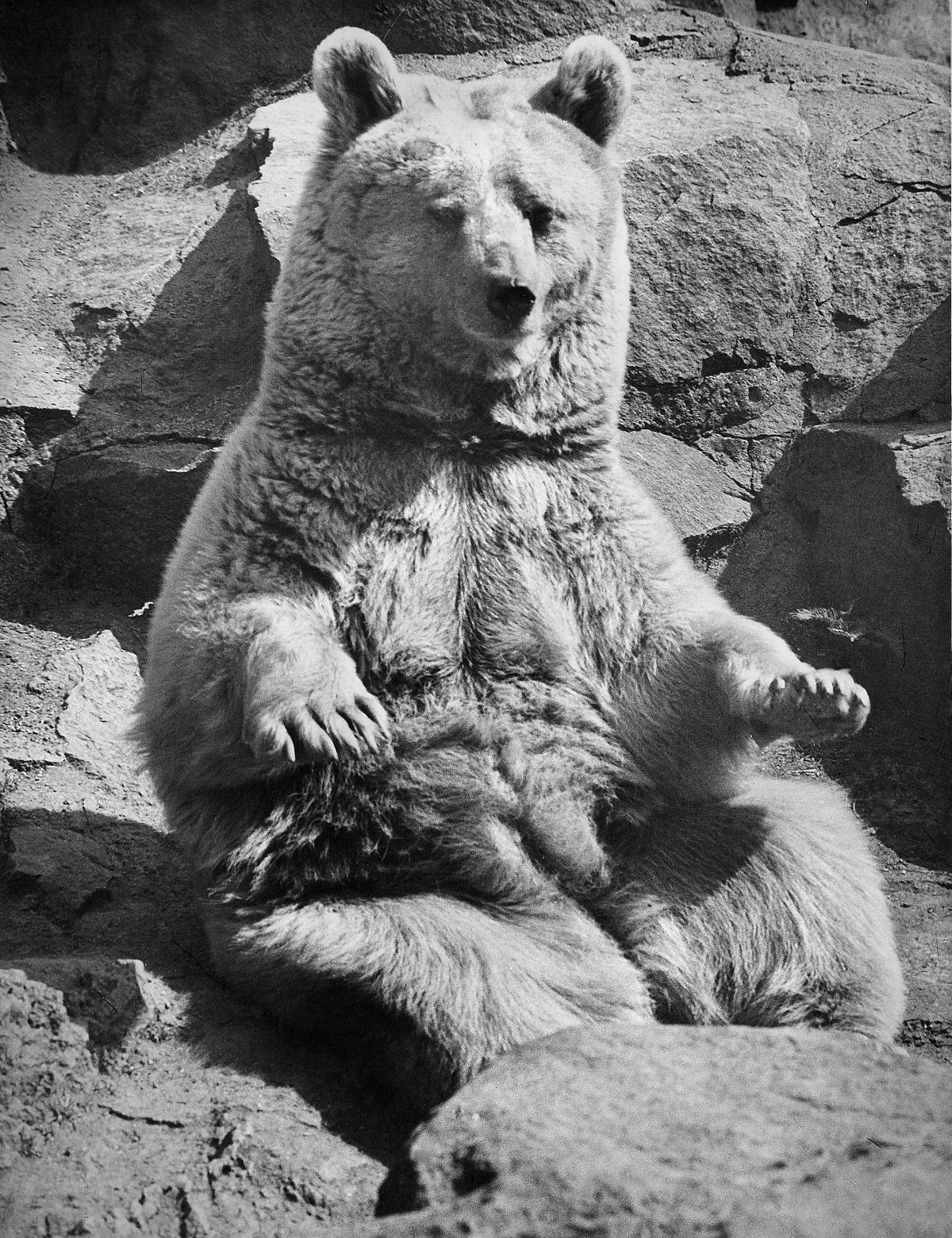 The day of “free Poland” never came and we now know that Poland was under Soviet rule for another 40 years.

For the rest of his life, Wojtek remained at the Edinburgh Zoo.  In 1963 at the age of 21, the bear passed away.

1. A name in the history books 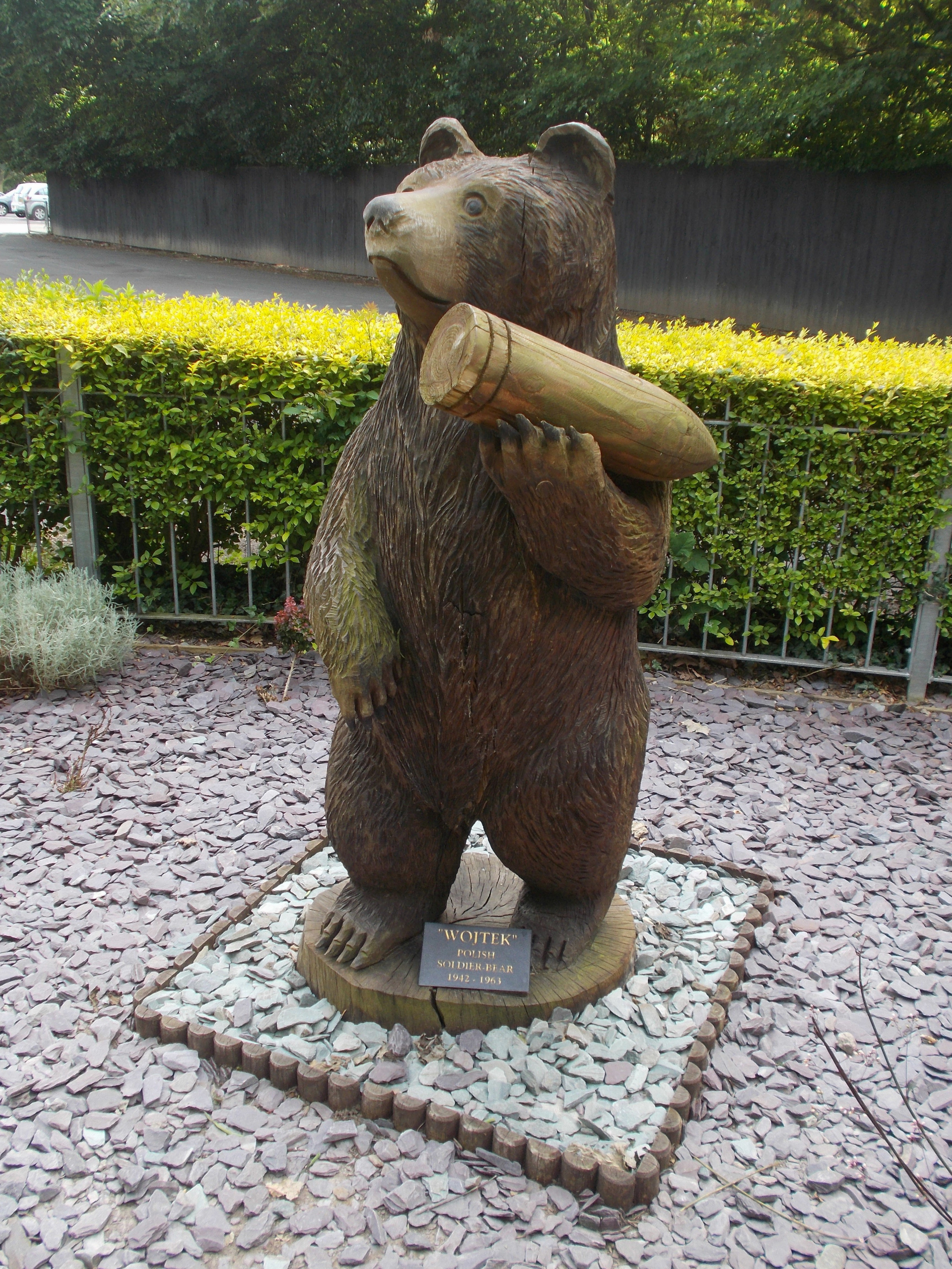 Wojtek became a symbol of the Free Polish struggle and an emblem of their heroic service.

Many public memorials in commemoration to Wojtek have been created. The list includes a plaque at London’s Imperial War Museum, a sculpture at the Sikorski Museum in London, and the carved wooden sculpture above, which sits in Weelsby Woods, Grimsby.

You have reached the end of a story that is nothing less than a fairy tale. You witnessed how an orphaned bear cub went on to the serve the Allies forces in WWII.