Defenseless Elephant Is Swept Away By Flooded River, Villagers Do Something Amazing To Save Him

This elephant fell into an extremely dangerous situation and was quite close to losing its life. These villagers, however, weren’t ready to let that happen. Keep reading to find out more about what happened, and what the villagers ended up doing to rescue the elephant. Slide #3 will leave you shocked! 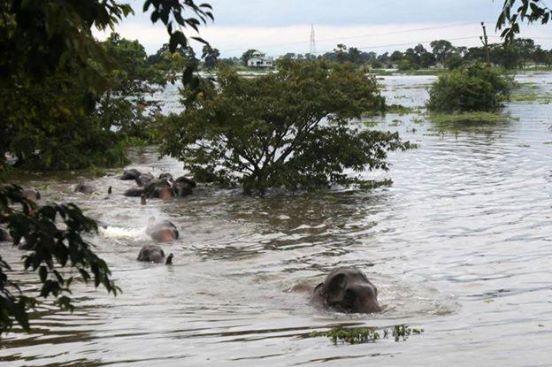 This elephant in Assam, India was separated from her herd and was all the way to the neighboring country of Bangladesh. The elephant was unable to move and was in an extremely dangerous situation. Here’s what happened next. 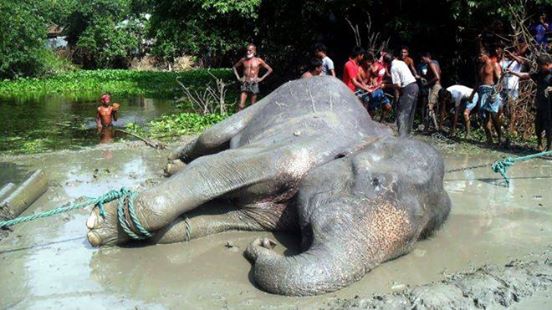 The elephant washed ashore in Bangladesh and was stranded in a secluded, flood area. She was stuck there for a while because officials could not figure out how to get her out. Soon they came up with a genius plan! 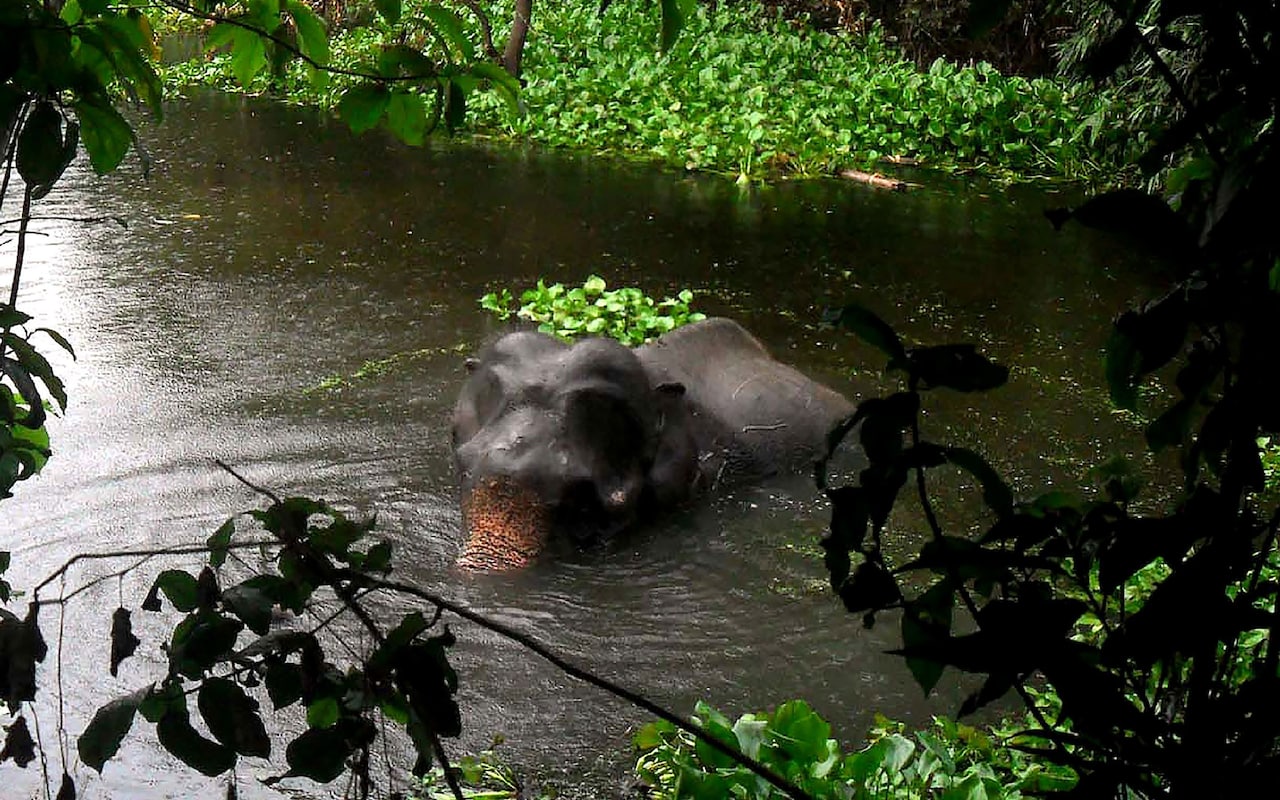 It was decided that the elephant would first be tranquilized in order for it to be taken back. However, once it was tranquilized, it took a few steps and walked into a pond. Things got even worse and what happened next really endangered the animal. 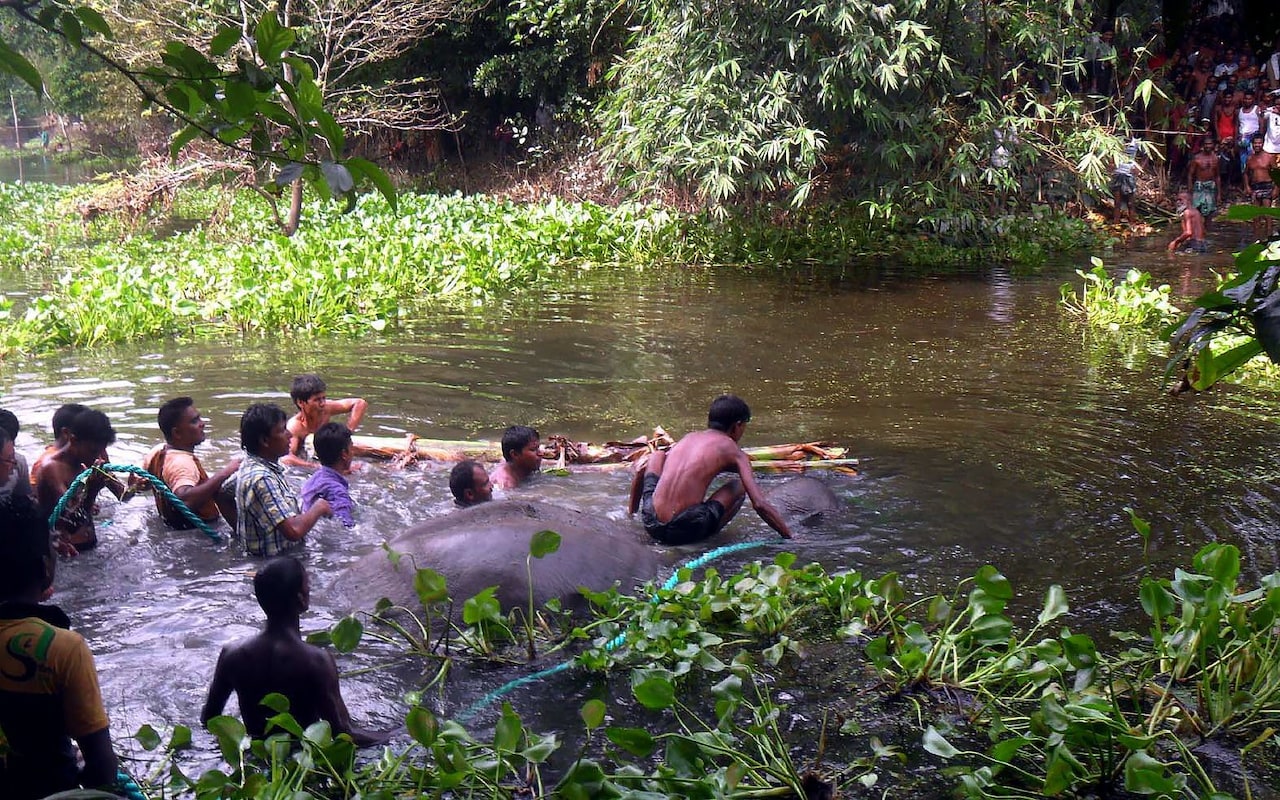 Once tranquilized the elephant took a few steps into the water and then fell down, unconscious This is when the villagers realized that the elephant was drowing, and sprung into action. What they did will surprise you… 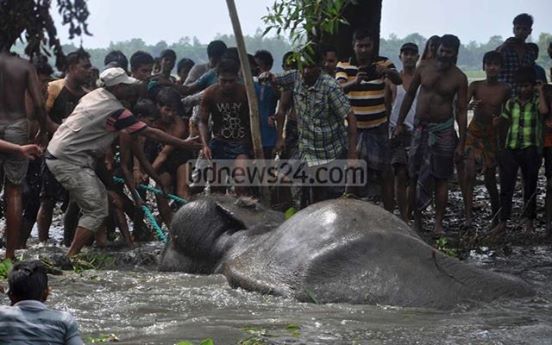 The villagers all rushed in to help the incapacitated, drowning elephant. They rushed to pull her out and you wont believe how many villagers were helping! See it for yourself in the next picture. 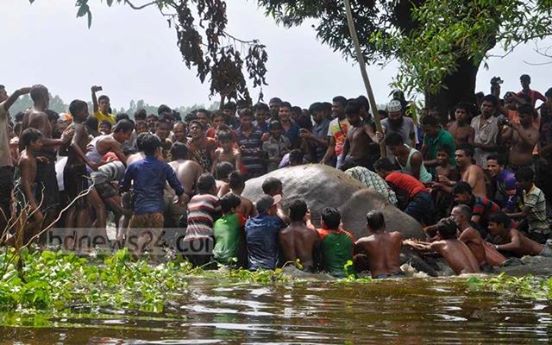 There were hundreds of villagers all helping out. They had to get the elephant on to land, where it could be taken away by rescue teams. Keep reading to find out if they succeeded. 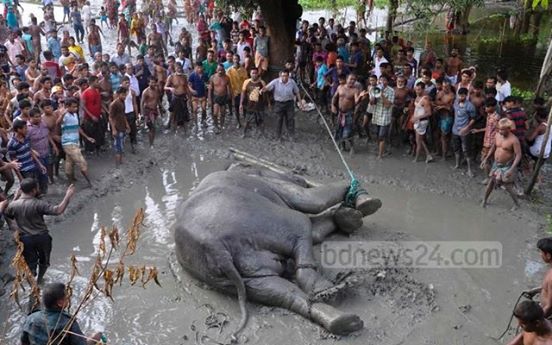 The villagers managed to get the elephant back on land. This meant that the elephant was now safe. But the next though proved to be even harder than expected. 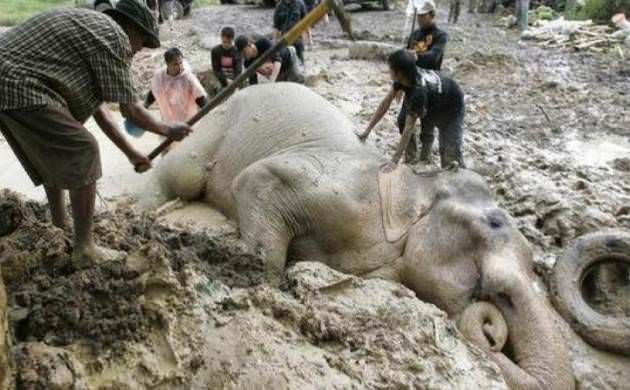 The villagers then helped the rescue team to attach harnesses, ropes and wires. These were needed in order to get the elephant out of the area. Soon they were able to do this amazing thing. 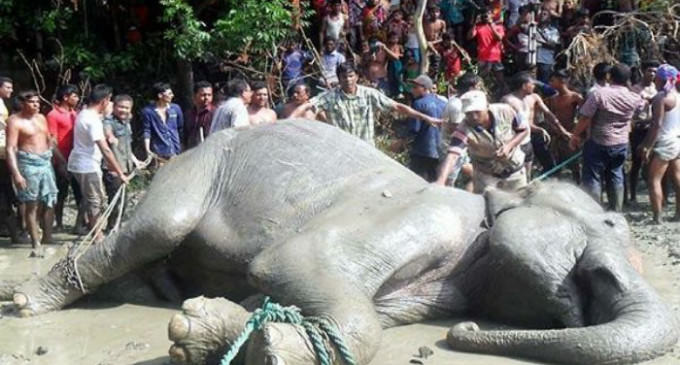 They began to pull out the elephant and take her away to a safer area where she could be kept. However, this one elephant was not the end of the problem. 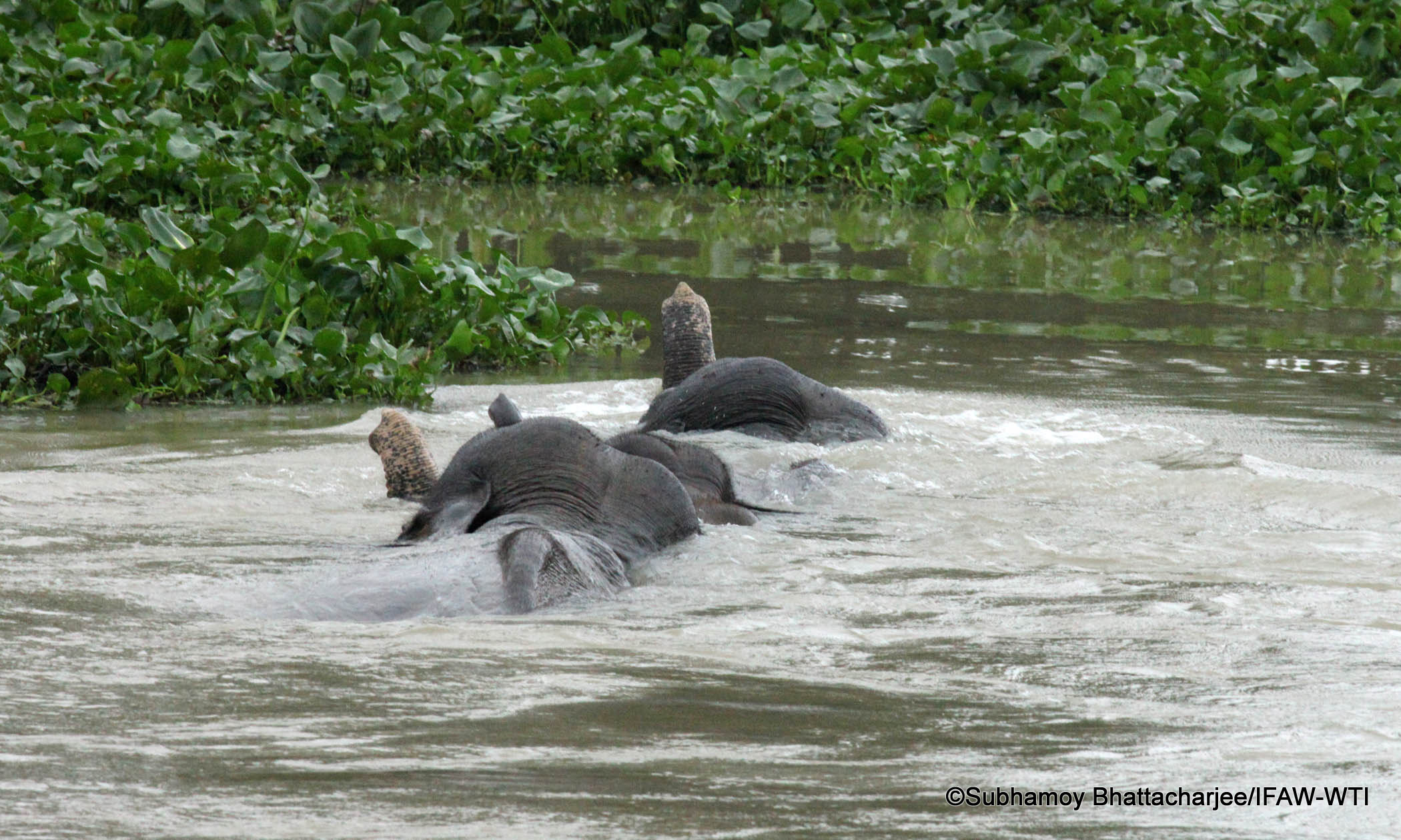 More than 200 animals were killed in the same flood that swept away the elephant and it has been extremely saddening. However, we cannot dwell on the other animals for long as the elephant that was rescued is still in danger… 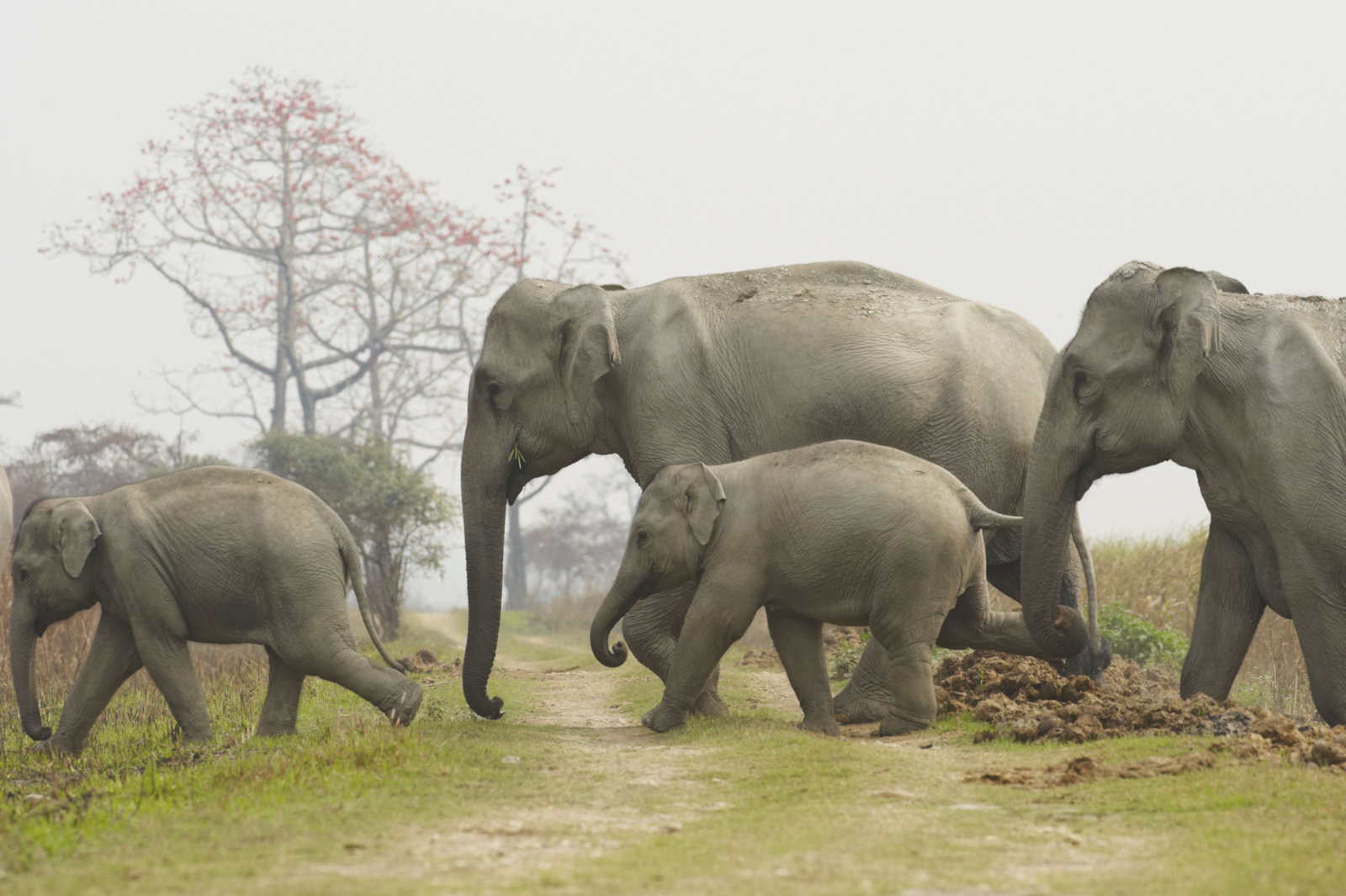 The officials decided that the elephant should be reunited with its herd. But there were some urgent issues at hand that stopped this from happening. 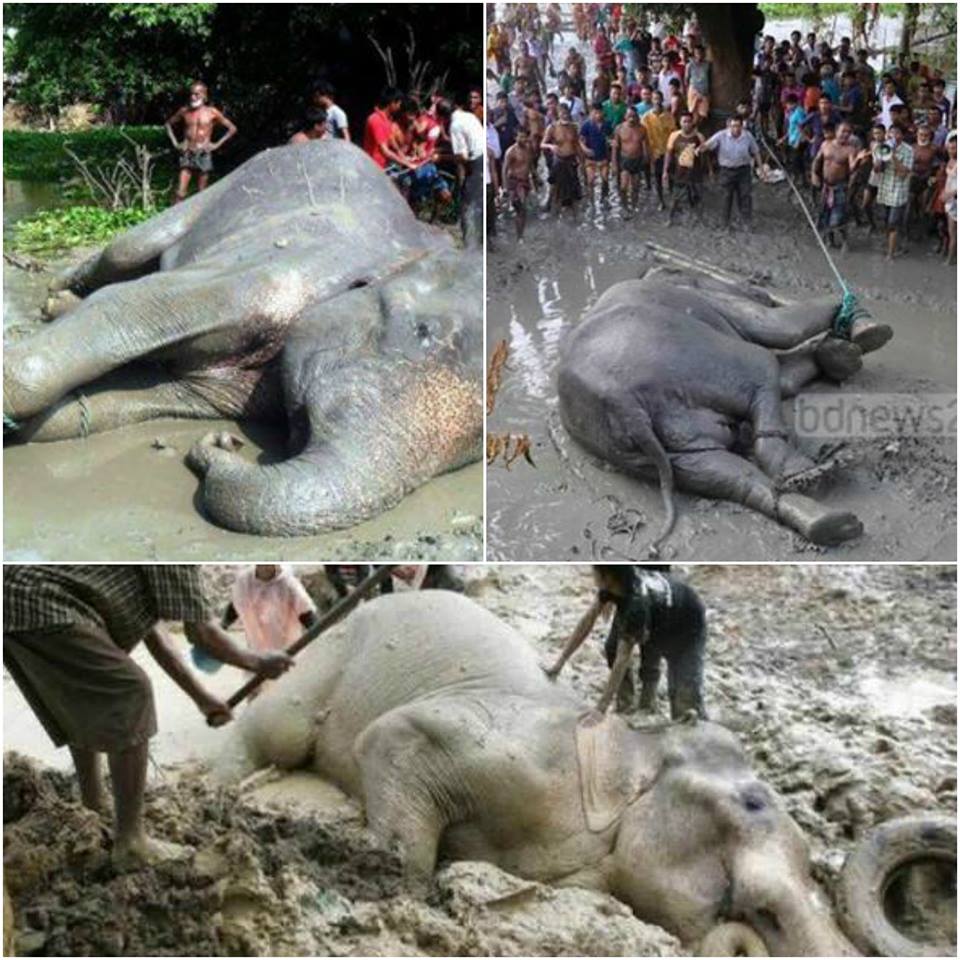 As you can see in this collage of pictures, the elephant was not in good condition when it was found. It was almost dead and had multiple critical injuries or health-related issues such as… 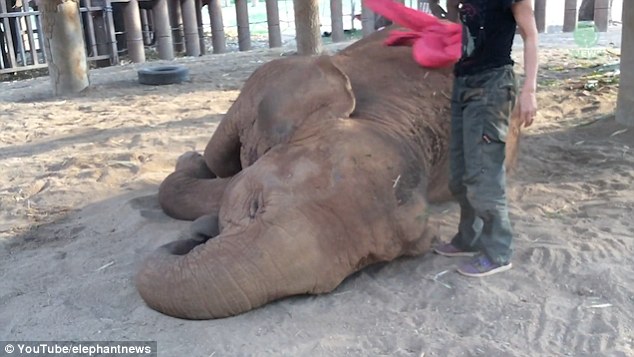 The elephant was battered and tired, and one of the members of the rescue team even said that “It is so weak that it can’t even lift its trunk. You can see her ribs from a distance.”. The plan was to transport the elephant to a safer place. 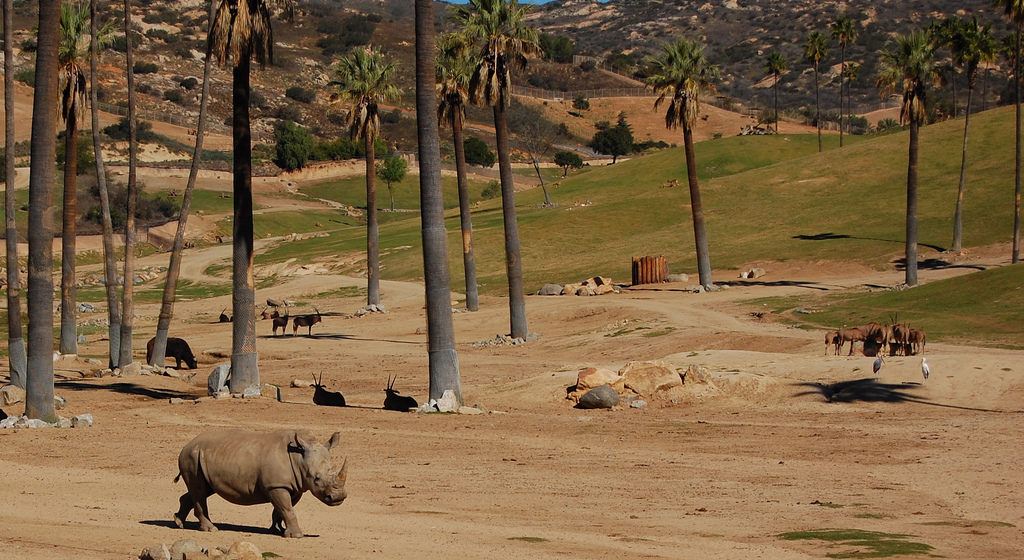 “Since there is no paved road nearby, we’ll keep the animal here and give it medicines and food,” Tapan Kumar Dey, who is part of the team said.

“Once it regains strength, we’ll use mahouts (elephant handlers) and a domesticated elephant to lead it to a paved road from where it’ll be transported to a safari park.” But it’s not only animals who are hurt by these floods. 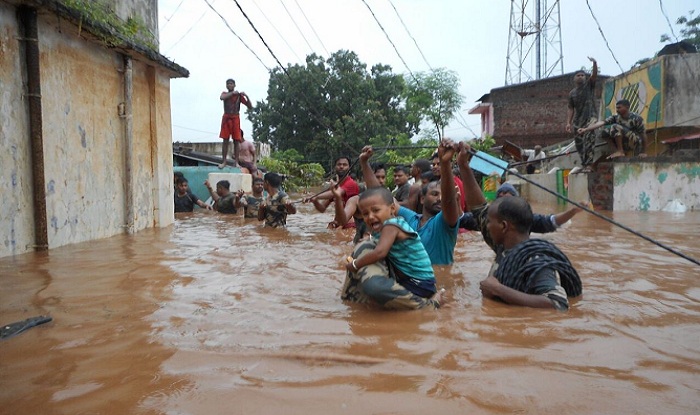 These floods have been caused by the monsoon rains that India gets anually. The death tolls have even risen up to 213 people, as of 2018, and there is no predicting how much more damaging it can get. In fact one of the saddest deaths was not the one that we already mentioned. 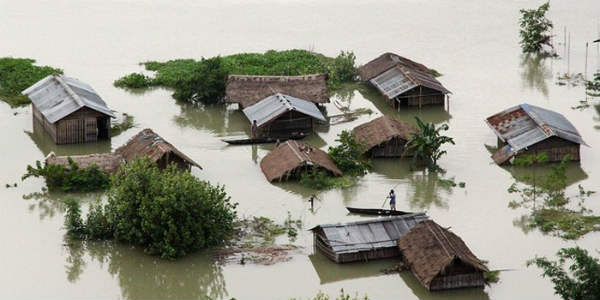 In Himachal Pradesh, the heavy monsoon rain resulted in a landslide in the Chirgaon area of Rohru, Shimla. The landslide destroyed a house and a 5-year-old child was buried alive under the debris and extremely sadly passed away. This is absolutely gut-wrenching and brings tears to my eyes. Sadly even this horrifying death is not the end of it, as our story about the elephant continues. 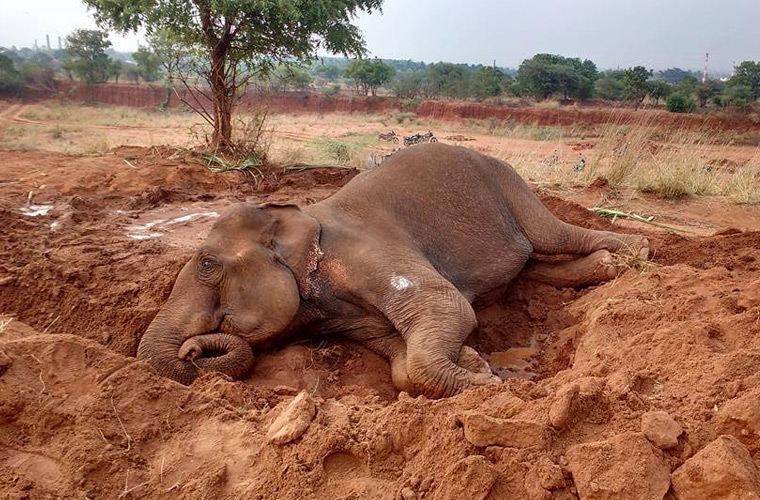 Sadly even though the elephant was rescued and taken to the safari park, the injury and fatigue caught up with it and quite sadly it succumbed after a hard fight and passed away. It isn’t that last however, as there are many more in danger. Keep reading to find out more about them….. 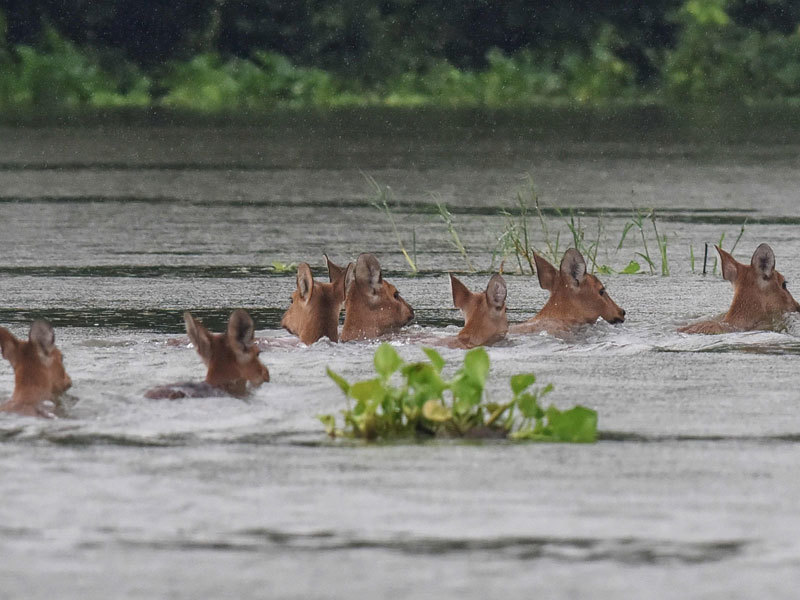 The floods affected the Kaziranga park quiet badly as it was in the line of impact. It had a diverse range of animals, and although the zoo did it’s best to save them all, there were some losses. The number of animals that died will leave you speechless! 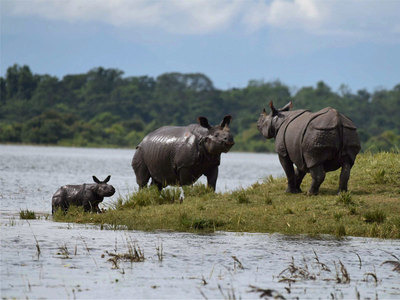 At least 225 of the park’s animals have been confirmed to have died due to the flooding.  This is absolutely mortifying and has left everyone disheartened and saddened. Not just this but also… 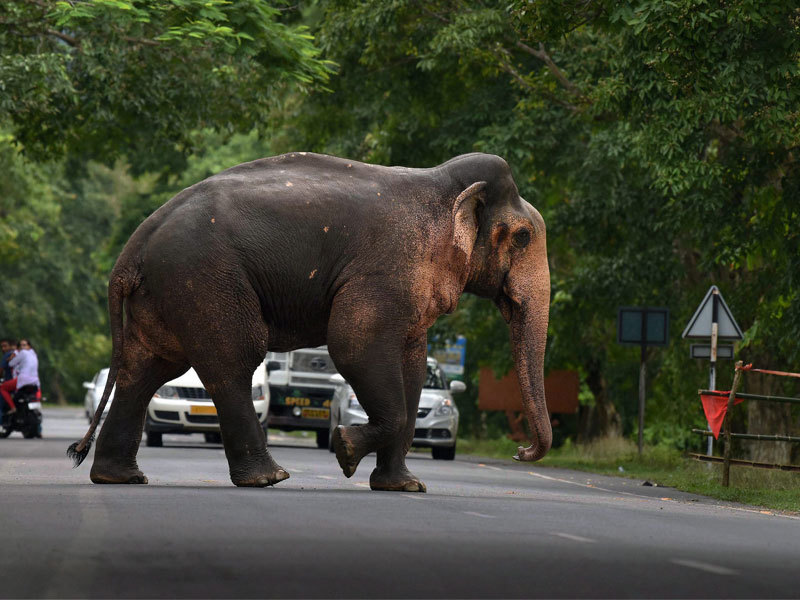 78 animals were being transported out of the park, however, things took a drastic turn for the worse as 13 of these animals were hit by speeding cars and overloaded trucks that were unable to break. This truly shows how human carelessness can affect other beings. The Assam Government has been called out by… 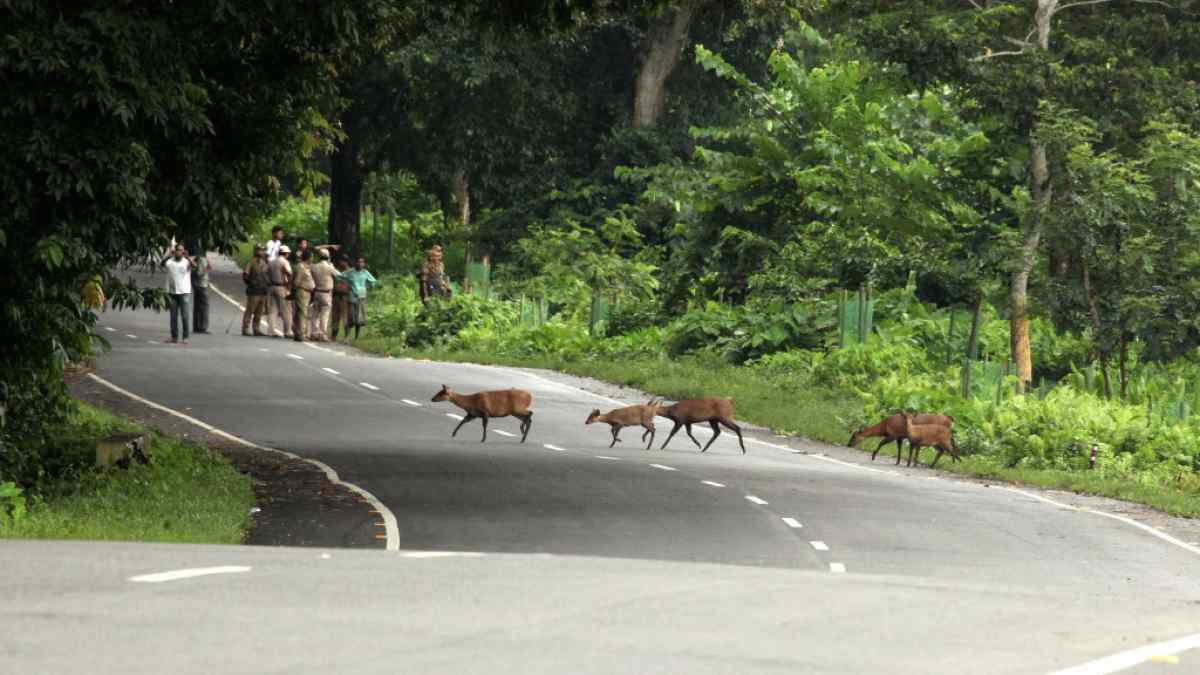 The National Green Tribunal has called out the Assam Government saying,”The animals are dying in road accidents on a daily basis. What are your traffic sensors doing? Tell us, why the sensors are not able to protect these animals,” in reference to the speed sensors put in place by the Assam Government. However the goverment replied with… 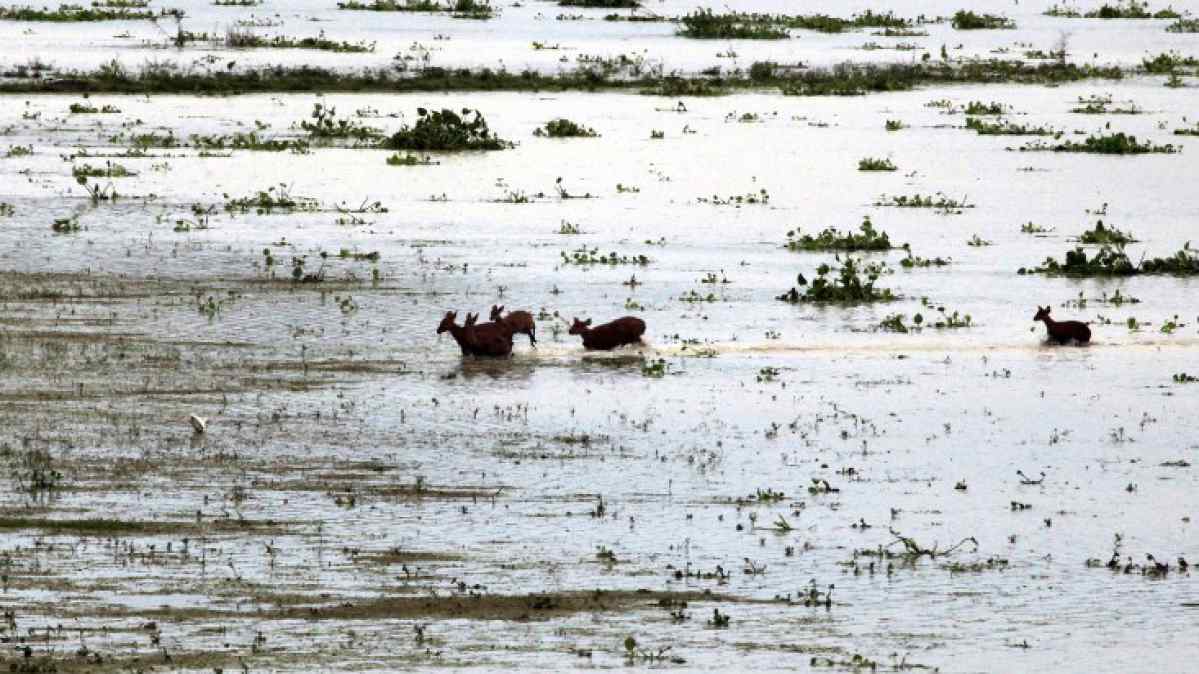 The government has replied by saying that not even a single animal has died on the stretch where sensor-operated automated traffic barriers have been installed. These statements have yet to be proven true however.

We send all our thoughts and prayers to everyone who has been affected by these monsoon floods, and our hearts go out to all the animals as well. Let’s hope that things will soon take a turn for the better.