D’Yaria is not just a jaguar, she’s a miraculous survivor found in the Ecuadorian forest. She was found badly injured, barely alive. But veterinarians found her in time and helped with the kitten’s recovery. She was shot by farmers that might have been scared of her and the veterinarians were shocked to see how many bullets D’Yaria had inside her small body. Her shocking story will break your heart… 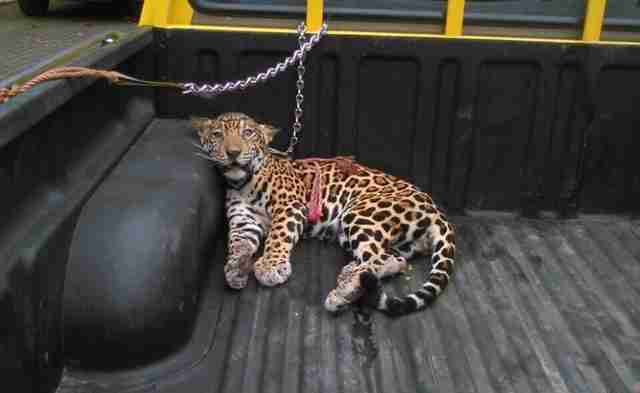 The 11-month old jaguar was found in Ecuador. She was found paralyzed on the ground, only able to move her head and neck. Why was she shot, since she was only a baby? 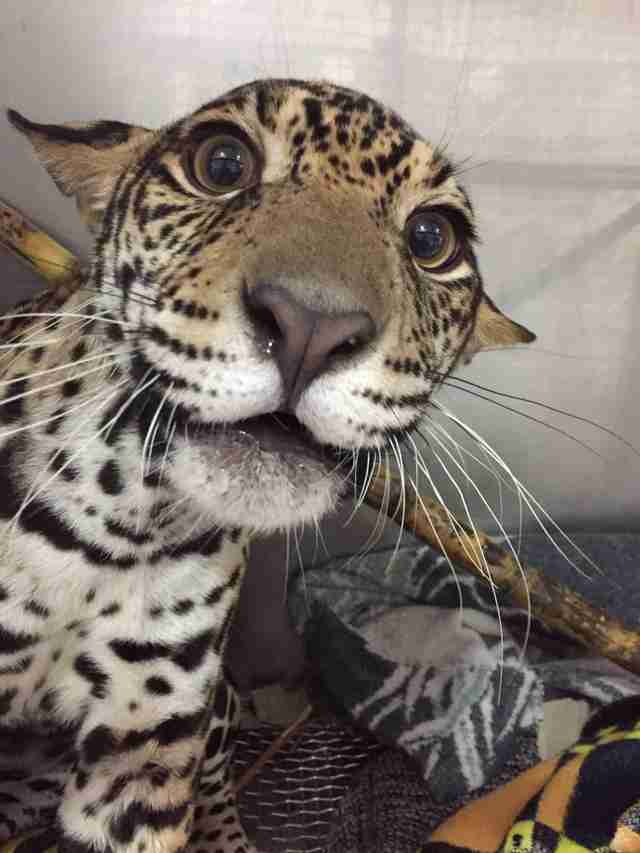 The area where D’Yaria was found was populated by people that had farms. The people that found her believe that the baby jaguar shouldn’t have been alone. Here’s what one of the veterinarians said. 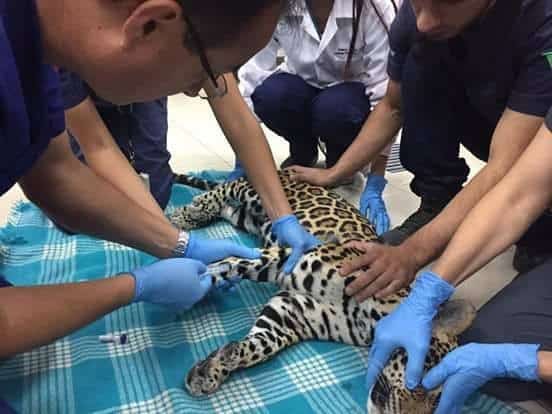 A veterinarian from Darwin Animal Doctors, María Cristina Cely believed that D’Yaria’s mother was with her, but she was probably shot and killed. The baby might have run from the place until she couldn’t move anymore. 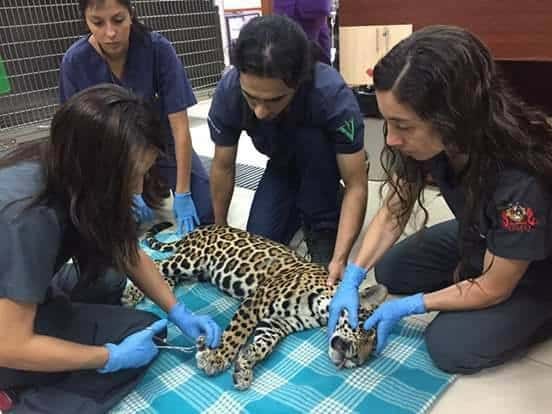 D’Yaria’s life was in danger, as she has been shot more than once. Cely said that ‘If she had not been found and she had not been treated, she would have not survived’. On her own, the baby jaguar wouldn’t have made it. But was was the thing that helped her? 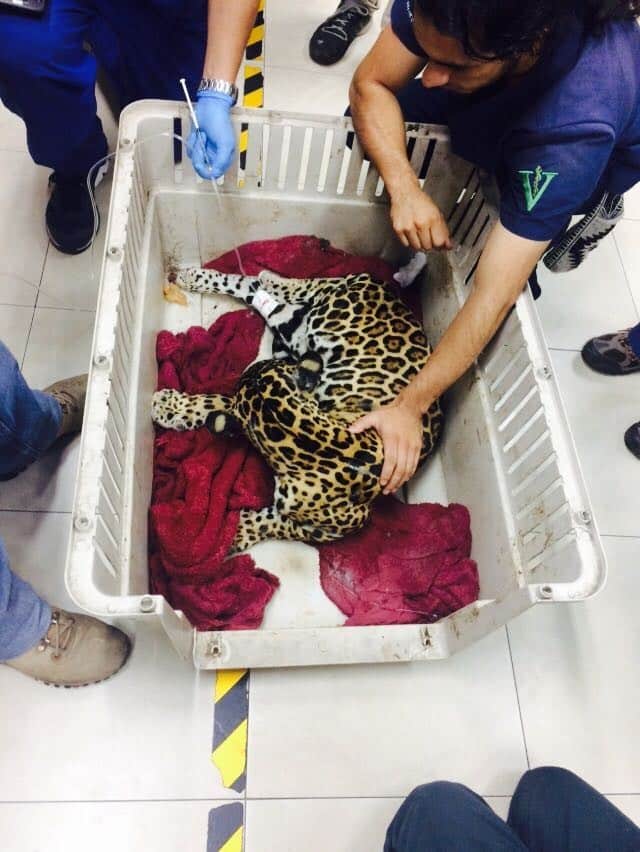 ‘She was paralyzed and she would not have been able to drink water and not be able to hunt or find food for herself’, added Cely. But here is where the team of veterinarians came and rescued the baby kitten. 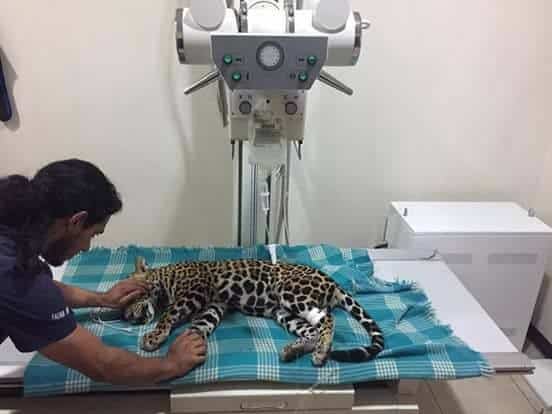 Brought by the locals to the animal hospital in Ecuador’s capital – Universidad San Francisco de Quito, the jaguar had one chance to recover, after being transported in a truck for five hours. 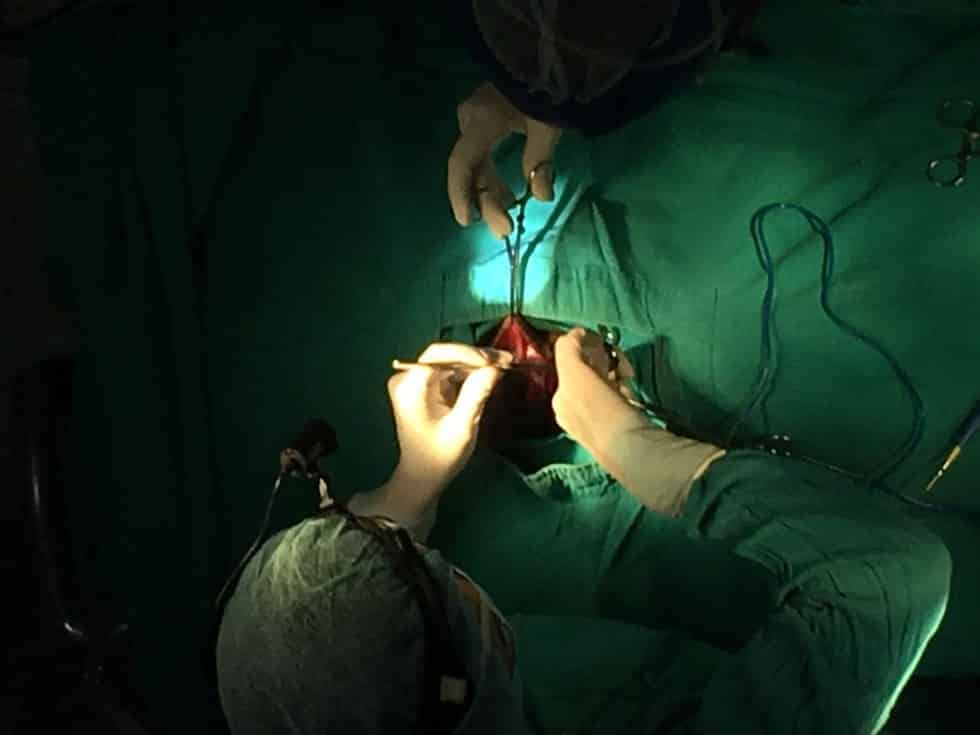 Dr. Andrés Ortega led a team of vets and tried their very best to save the jaguar’s life. He didn’t believe that the kitten would make it through the surgeries, though. Cely related the whole procedure. 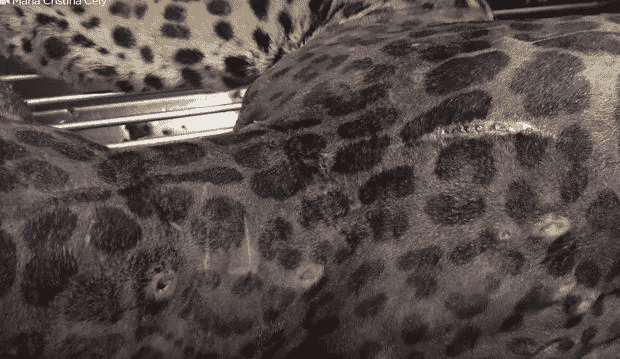 The poor jaguar has been shot 18 times, and there were areas in her spine that were damaged. The surgery not only removed the bullets, but it also fixed the damage done in the vertebrae that were in the neck. 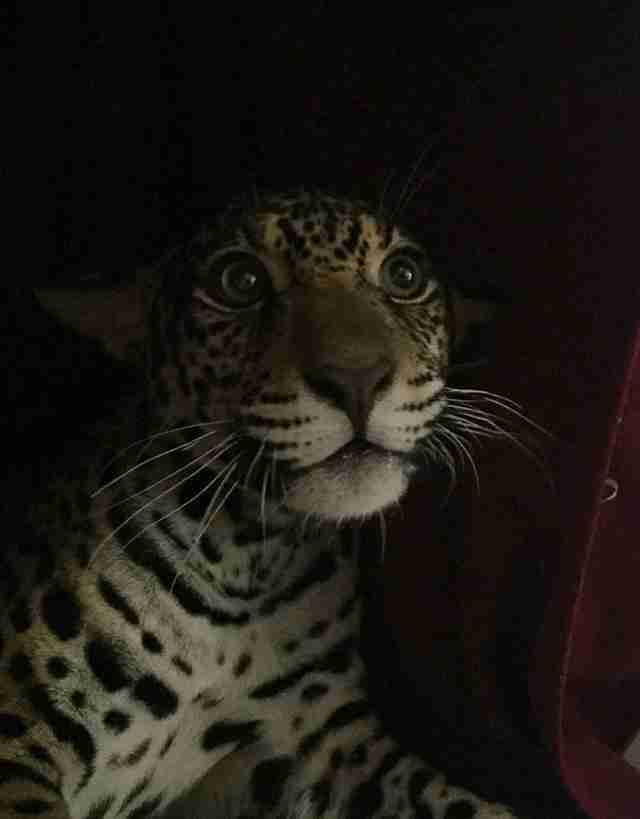 The team of vets took care of the jaguar post-surgery and D’Yaria also shocked them when she started to slowly move her legs. With time, the jaguar would get stronger and heal. Cely talked about the kitten’s first steps.

11. So Many Bullets, But So Much Will to Survive 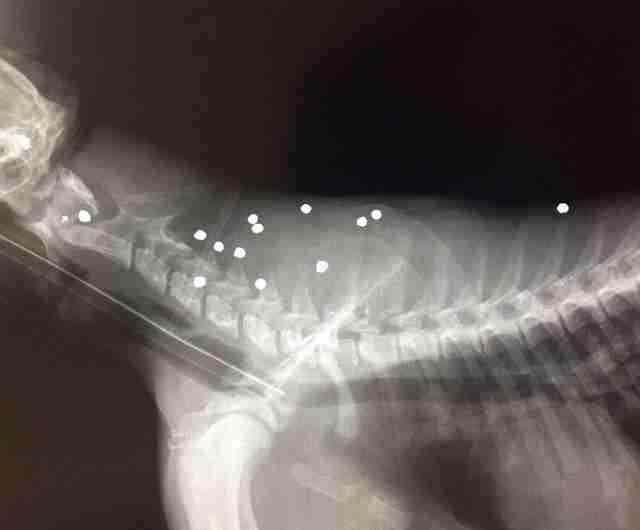 ‘She stood up and she started showing signs that she would not stay still, and that’s when everyone realized that she was going to make it’, said Cely. Even if the first look at the X-Rays looked this grim, the kitten was fierce. 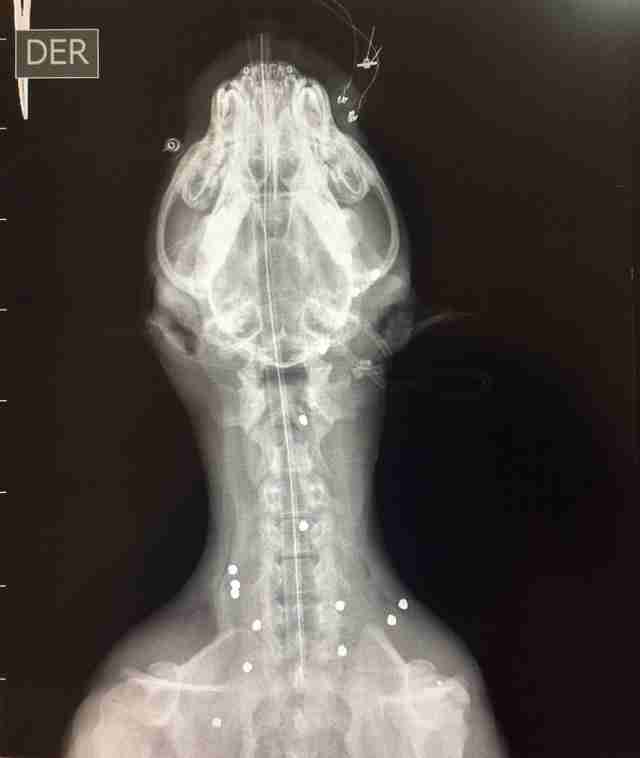 Jaguars like D’Yaria are on the IUCN Red List, considered to be a Threatened Species. Fortunately, her survival is great news, meaning she will be able to mate and populate the Ecuadorian forest, as long as she will stay away from farmers. 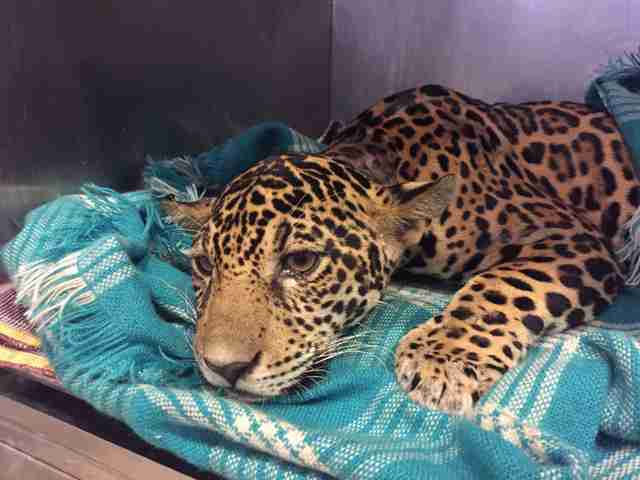 The kitten was getting better. Her injuries started healing, and in the meanwhile, she had to stay in a small cage at the animal hospital. But this didn’t mean that she didn’t have fun. The staff was doing their best to keep her happy, just see it for yourself in the following photos.

8. A Month of Miraculous Recovery 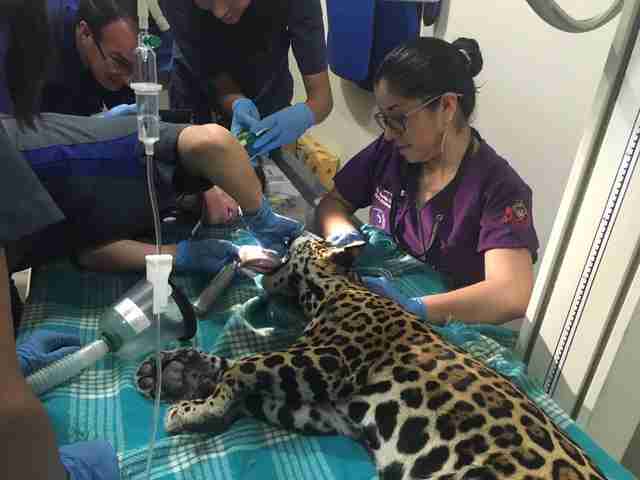 The vet team has done a great job, and only after a month from the surgical intervention she was moved to a larger space, in the outdoors. She was now in the nature park, Lago Agrio, in Ecuador. 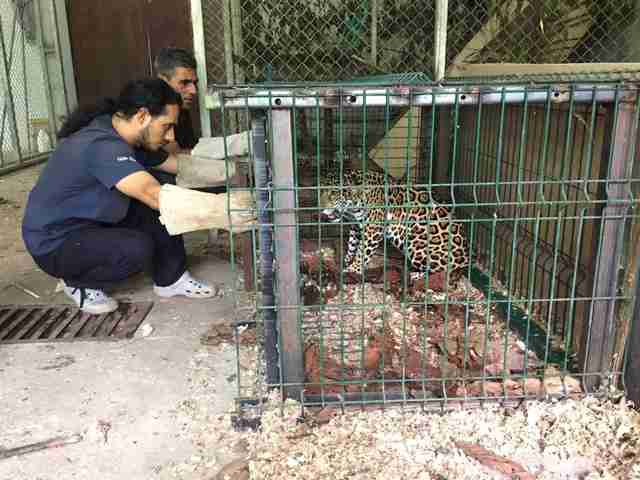 Her recovery was at 95% and Cely stated that D’Yaria is ‘running like it’s the last day of her life’. The vet team believes that the jaguar can be released into the wild, to let her enjoy the rest of her life with other jaguars. 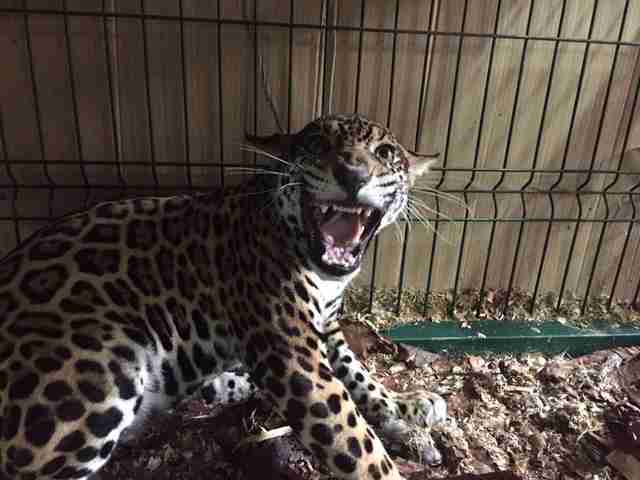 For a successful release, the vets tried to not come in contact with the jaguar, so that she doesn’t get used to people. This way, she would not consider humans as benefactors and will keep her away from them in the wild. Dyaria growled at people, Cely relates next. 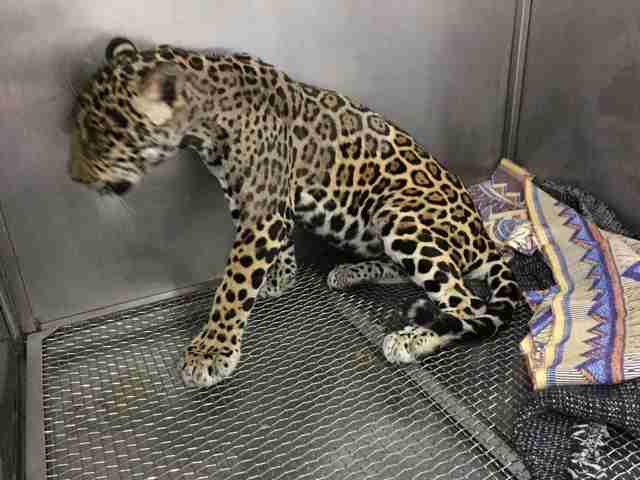 Cely said that ‘during her time in the hospital, she hated humans. She would growl every time she got checkups. But she has become a strong and fierce beast as you can see in the next photo. 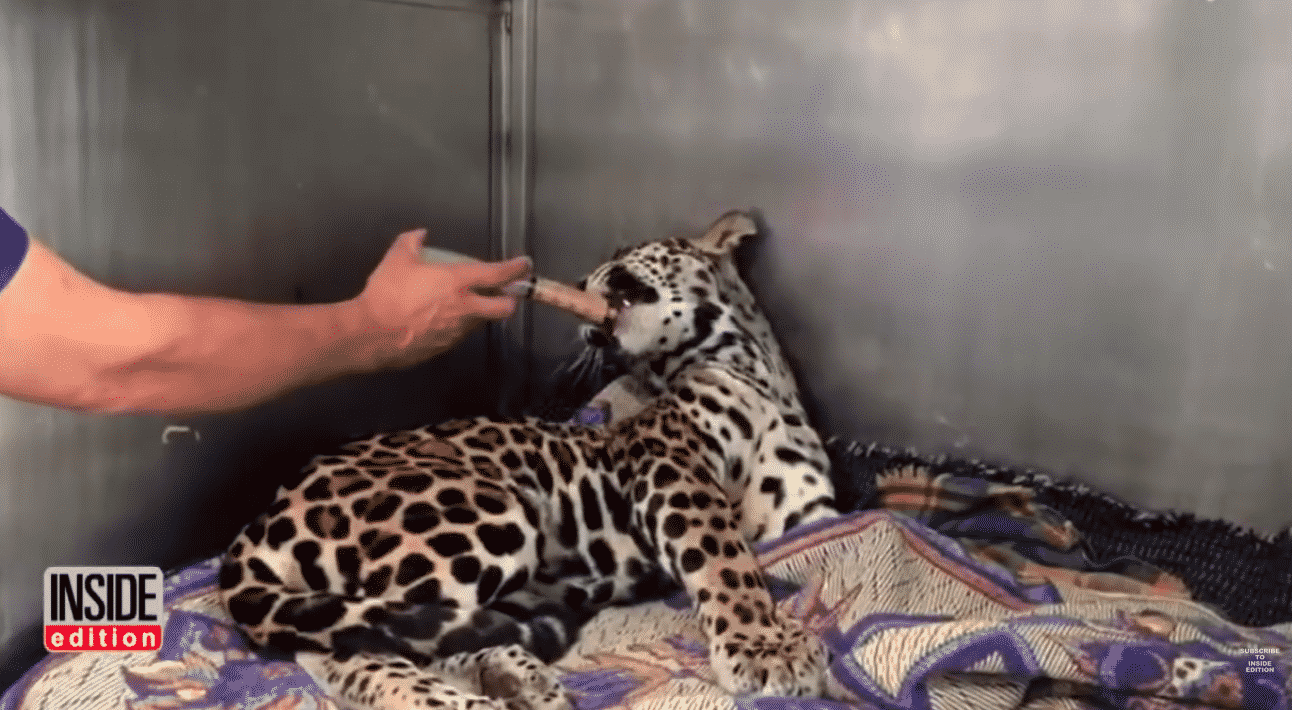 Cely explained that D’Yaria means brave tiger and that the cute kitten has been brave and has recovered 100%. D’Yaria has received special treatments after the intervention to fully recover. Just look at how happy she looks now!

3. D’Yaria Has Been Through a Lot 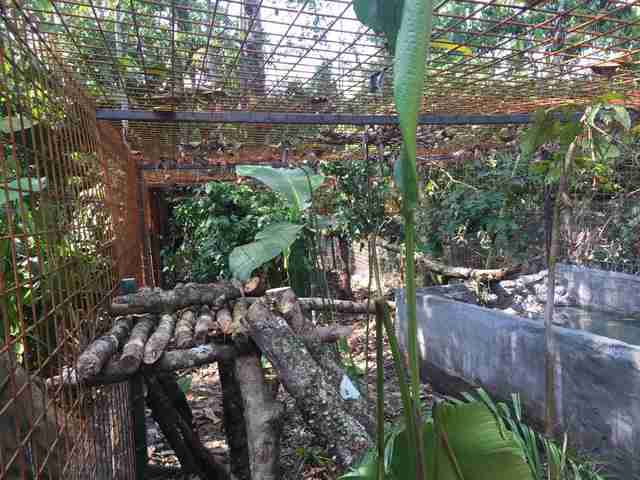 ‘Now, at the enclosure in the jungle, every time somebody gets close, she throws herself against the cage and pretends she’s going to attack that person,’ said Cely. 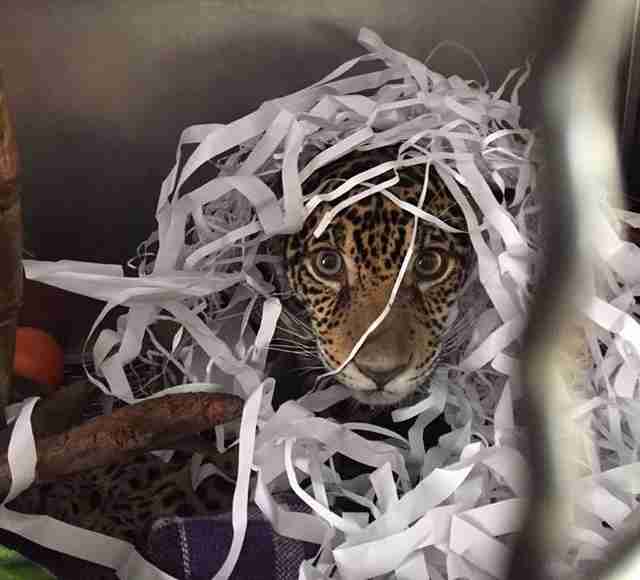 The staff gave the little jaguar something to play with when she was recovering. It looks like D’Yaria had some fun too, but we can only imagine how she’d feel when she’s back in the wild, free to run and play. 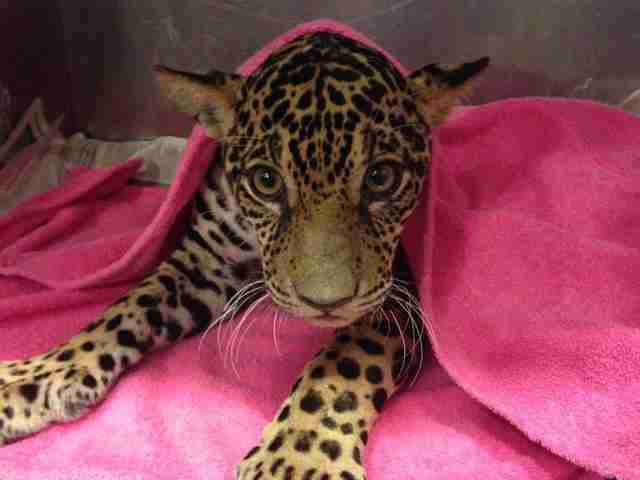 Cely added that ‘everyone is looking forward to seeing her grow up and being a full-grown jaguar and having little jaguars. D’Yaria will be released at the Tiputini Biodiversity Station and she will wear a radio collar that will keep her safe from other misfortunes.