22 Secrets Hidden In Get Out You May Have Missed

Who would have known that such a low-budget horror movie would become the hit of 2017? Not only a lot of horror movies don’t end up great, but in this case, the director is a comedian, Jordan Peele and he managed to create a masterpiece. Moreover, this is his directorial debut! Spoiler alert! We’re going to dig deep into the hidden secrets of ‘Get Out’, so you’re either with us or you ‘Get Out’! 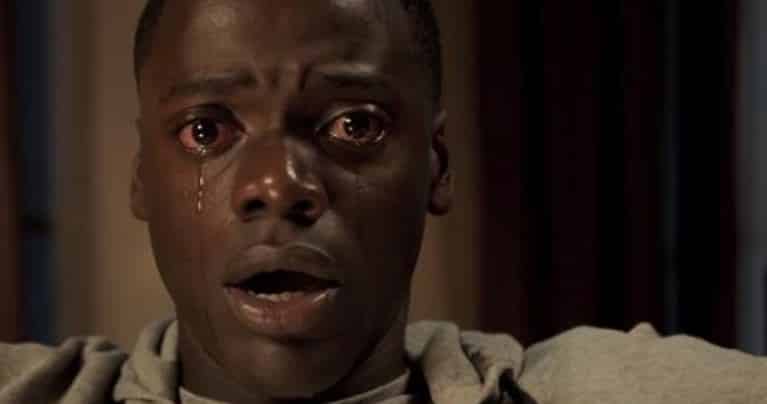 In more than one scene, Rose’s mom is casually stirring her tea and making repetitive noises to hypnotize Chris. This is how his mind gets suppressed, putting him into a trance.

Rose argues that she was the driver but doesn’t insist to show her ID to the cop. This way she avoids any paper trail and nobody will prove that she was with Chris before he disappeared. You won’t believe what hints the opening song was trying to send to the audience! 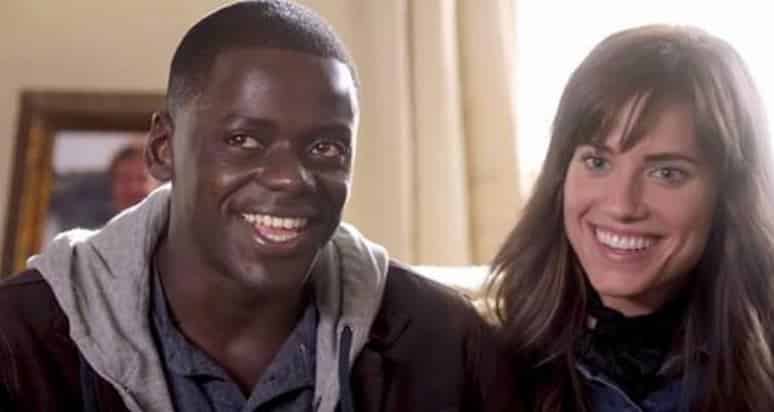 ‘Something bad is coming. Run’, these are the lyrics of the opening song that come as a warning for Chris. The other song, ‘Redbone’ comes with the chorus that chants ‘Stay woke’, suggesting that he should be aware of his surroundings and of what’s happening in the world. 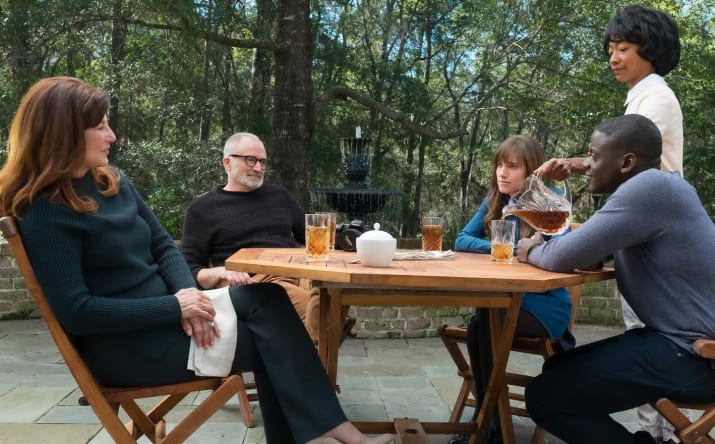 The maid, Georgina, spills the tea because of Rose’s mother – Missy, clinks a spoon against the glass and sends her into a hypnosis. 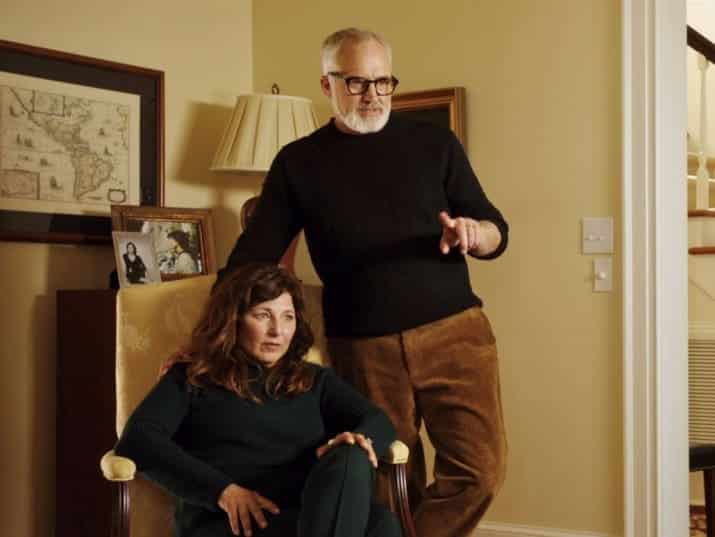 The deer Rose hit on the way home is a symbol of racism. Also, Chris’ mom died in a hit and run accident, making it difficult to get over this incident. When hearing about it, Dean doesn’t care about the ‘Black buck’ or deer – which also stands for how black men would not bow to white authority. But have you noticed that Walter is always wearing a hat? You won’t believe what’s hidden under this symbol!

Walter wears a hat to hide his lobotomy scars. His body is no longer his own, as it encases Dean’s father brain.

Georgina hides her lobotomy with her bangs making her presence in the window rather scary. Later in the movie, we see Logan who is wearing a hat too. Check him out at #13!

The party stands for demonstrating aggression and dehumanization of black people. Chris is being asked a lot of rude racist questions. The only Asian character asks him: ‘Is the African-American experience an advantage or disadvantage?’ – perhaps thinking that he may like to trade bodies. But the clothes they’re wearing are also hiding a shocking secret, as #14 points out!

Every character in the movie is wearing some red accessories, except for Chris, who is wearing blue. It is a symbol of ‘us vs. them’, also standing for American politics and the parties involved. Check out the symbolism of the American flag at #6.

Logan is hiding his lobotomy by wearing a hat. If you paid attention to colors this time, you will see the blue ribbon on his hat. He is also bothered by something else, hinting at a strange mystery.

12. Separating White from the Coloreds 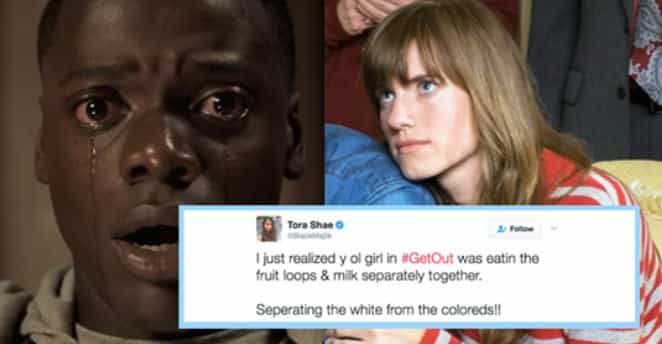 The last moments of the movie show Rose eating fruit loops separately from the milk. She is either separating white from colors or showing an OCD in a deeply psychotic manner. We’re not done with the color symbolism, just check out the next picture to see for yourself.

In the white car, we can see a knight’s helmet, representing the ‘White Knights of the Klu Klux Klan’ – and we all know what that means!

10. A Terrible Thing to Waste

Chris is forced to watch TV and sees a video that repeats the slogan ‘A mind is a terrible thing to waste’, which was used in the United Negro College Fund. Picking out cotton is subtly pictured in the next scene!

Chris is tied up in the basement, so to stop hearing the hypnosis, he thinks of pulling cotton from the chair and stuff it into his ears. The director of the movie shows us that, for the first time here, picking up cotton is life-saving.

The movie has several references to Stephen King’s ‘Man, I feel like I’m in a hedge maze out here’, ‘The Shining’ with the number 237 of the hotel room,  ‘A Clockwork Orange’, ‘Rosemary’s Baby’ and ‘The Stepford Wives’. In this scene, Rose looks like Freddy Krueger. You won’t believe what a simple cup of tea means in the movie! 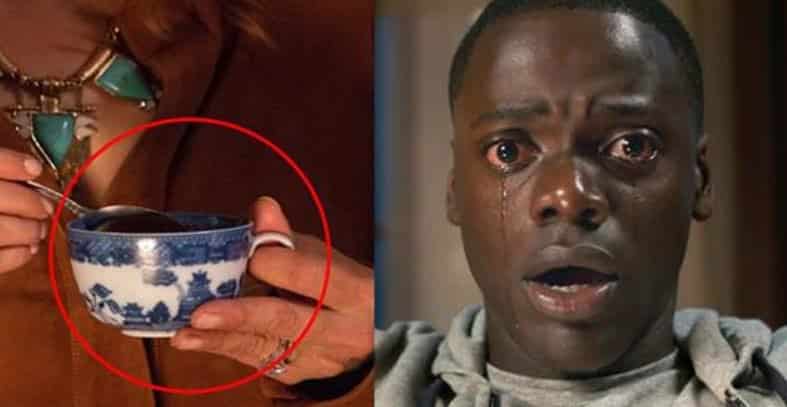 Peele said that there is also a symbol to the teacup as masters used to summon their slaves by clinking their teacups. As for the silver spoon, the masters came from wealthy families – ‘born with a silver spoon in their mouths’.

Together, Rose and Chris form the colors of a distorted American flag. The colors are not too bright because the movie doesn’t show a bright side of America. But the meaning of the bingo game tops them all!

The bingo game looks like the slave auctions, where the people placed bids on Chris. This scene is the darkest twist of all, predicting the horror that’s about to come. 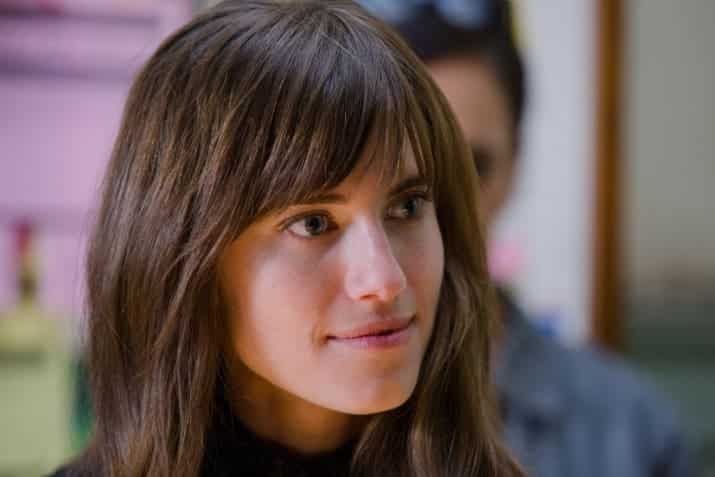 Rose stands for the indifference to the racism in America, while she is portrayed many times being passive to killing the buck, and then ‘shopping’ for new victims as Chris is on his way to getting a lobotomy.

In the Bible, God’s words are ‘I am the Alpha and the Omega, the first and the last, the beginning and the end’. On the Armitage’s house, there are two Omega letters, foreshadowing Chris’ end. 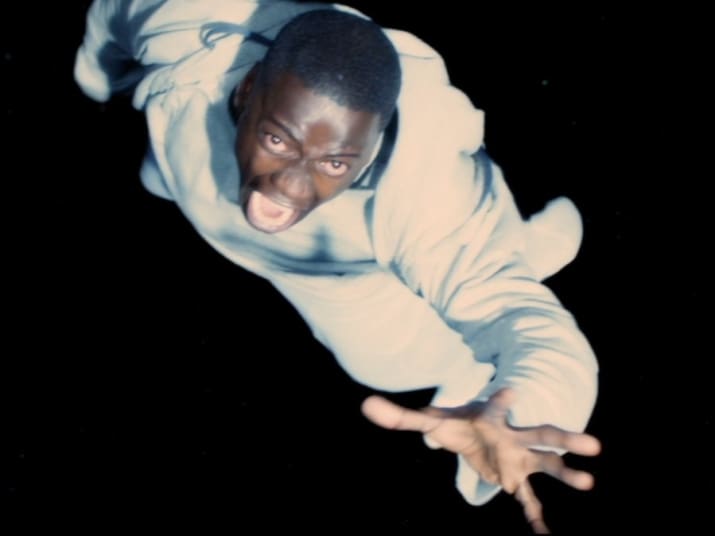 This is where Chris falls into hypnosis which shows how people cannot escape racism. Chris is terrified and powerless, and Missy’s figure is connected to the history of black America. 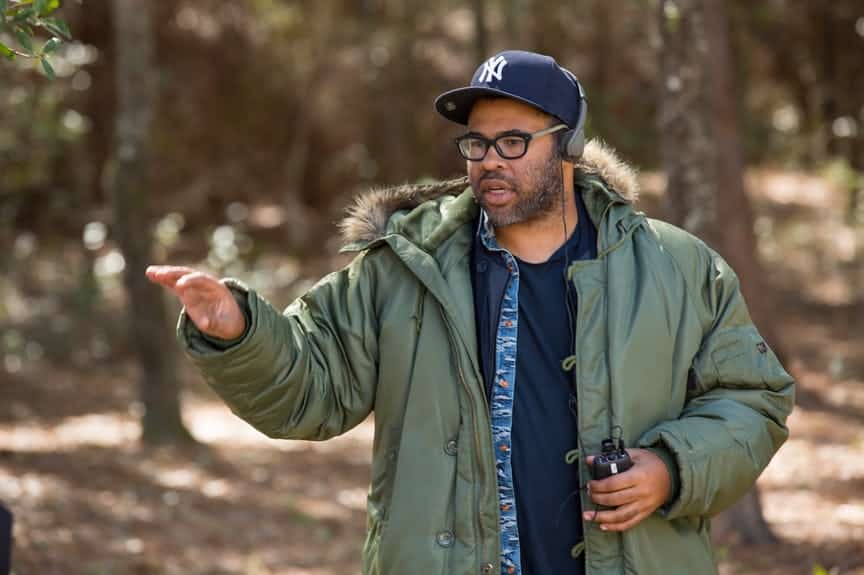 Jordan Peele makes a cameo appearance in his movie, but the audience can only hear his voice. He is the guy that we hear late in the movie saying in a Morgan Freeman voice ‘A mind is a terrible thing to waste’, referring both to the slogan and to the fact that Chris’ mind was up for ‘grabs’.