Do you ever feel like you were meant for something bigger? Like you had a special purpose in this world? Well, a former Russian traffic cop named Sergey Anatolyevitch Torop suddenly had a revelation back in 1990 after the fall of the Soviet Empire that he is the reincarnation of Jesus. Yes, this Russian man believes that he is the son of God. More than that, he has over 5,000 followers who idolize him and follow his every word.

The former Russian traffic cop now goes by the name of Vissarion and he created his own religious movement that’s named “Church of the Last Testament”. You won’t believe what Vissarion has his followers do in his name and what are his daily practices.

This is Vissarion, the self-proclaimed son of God. As everyone can tell, his choice of clothes matches his fanatic beliefs. Even though this man might be seen as crazy in America, this is not the case in Siberia. Check out the next picture to see the church his followers built for him! 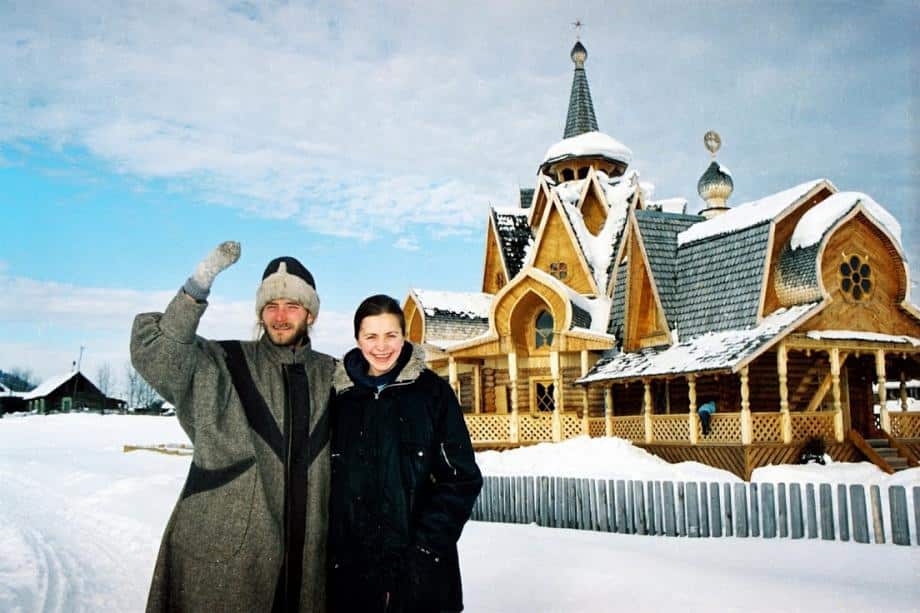 Since Vissarion believes he is the son of God, what place would be more suiting for him to live in other than the house of God? He and his large number of followers got together and created this wooden church for him. Obviously, Vissarion is the head of the church and he decides what rules people need to follow. You won’t believe what Vissarion likes to do in his free time! 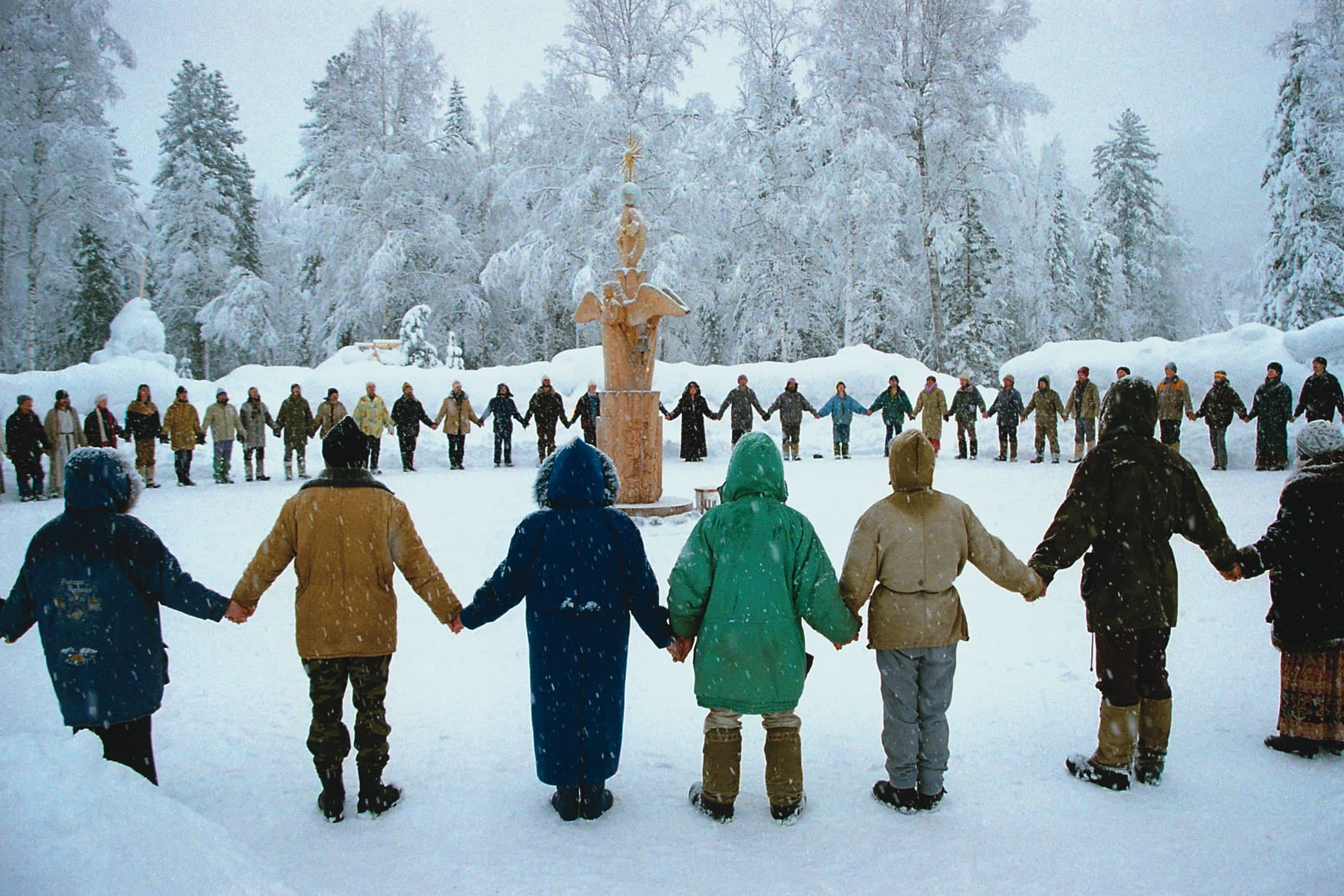 Even though Vissarion’s religious movement is located in Siberia and it’s open for everyone to join, he actually lives in a small settlement called Abode of Dawn. This location is close-by to Vissarion’s church and its the home to 250 of his most loyal followers. You won’t believe how Vissarion chooses who gets to live in Abode of Dawn. 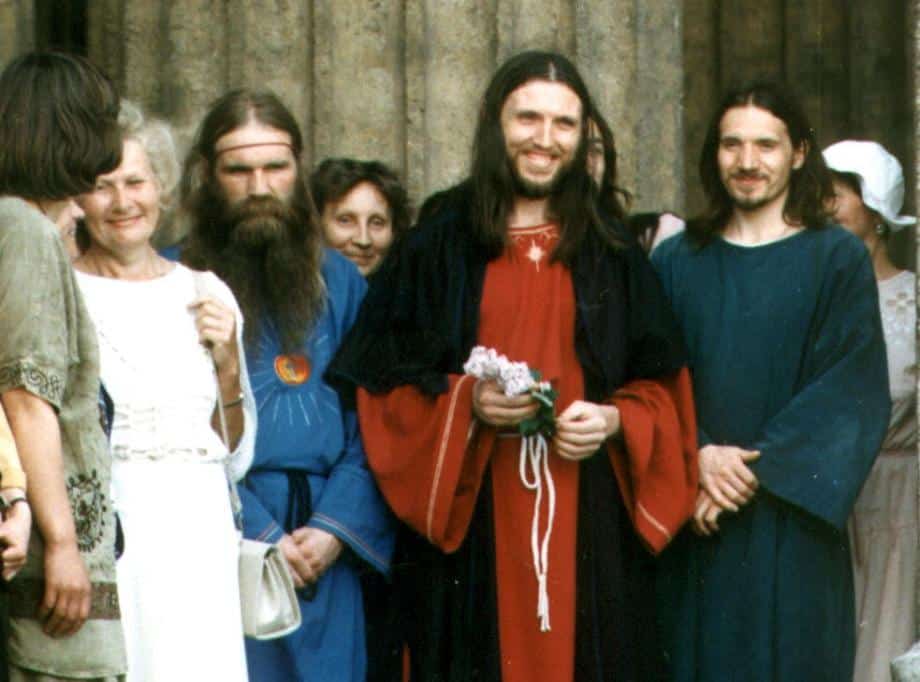 While Jesus might be known for always opening his arms to everyone, this is not the case with Vissarion. This self-proclaimed reincarnation of Jesus doesn’t allow everyone to stroll through his settlement.

Even though the doors to his church are always open, people cannot enter Abode of Dawn without receiving an invitation first. Check out the next picture to see what he requires of his followers before sending them an invitation.

16. Leave Your Life Behind 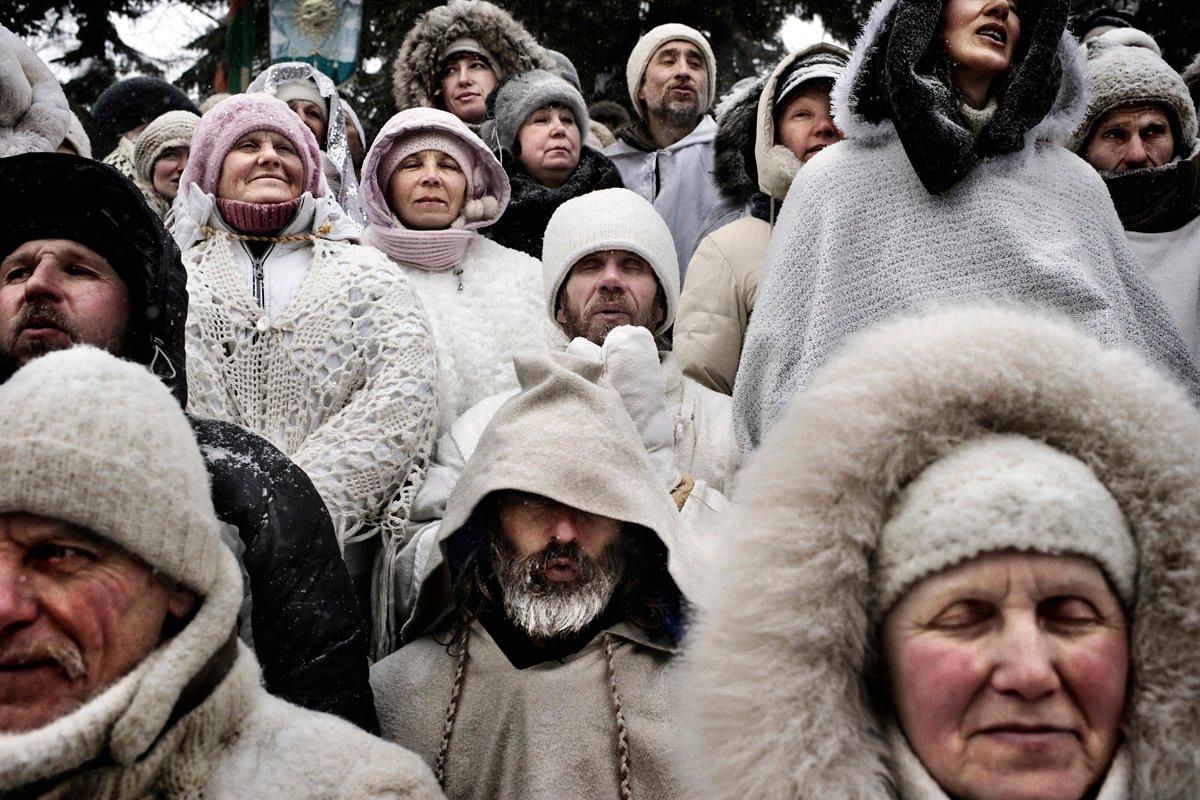 Followers who want to join Vissarion and live in his small settlement are required to leave their old lives behind. This means that Abode of Dawn residents are required to quit their jobs and families.  But that’s not all since Vissarion asks one more thing of them… 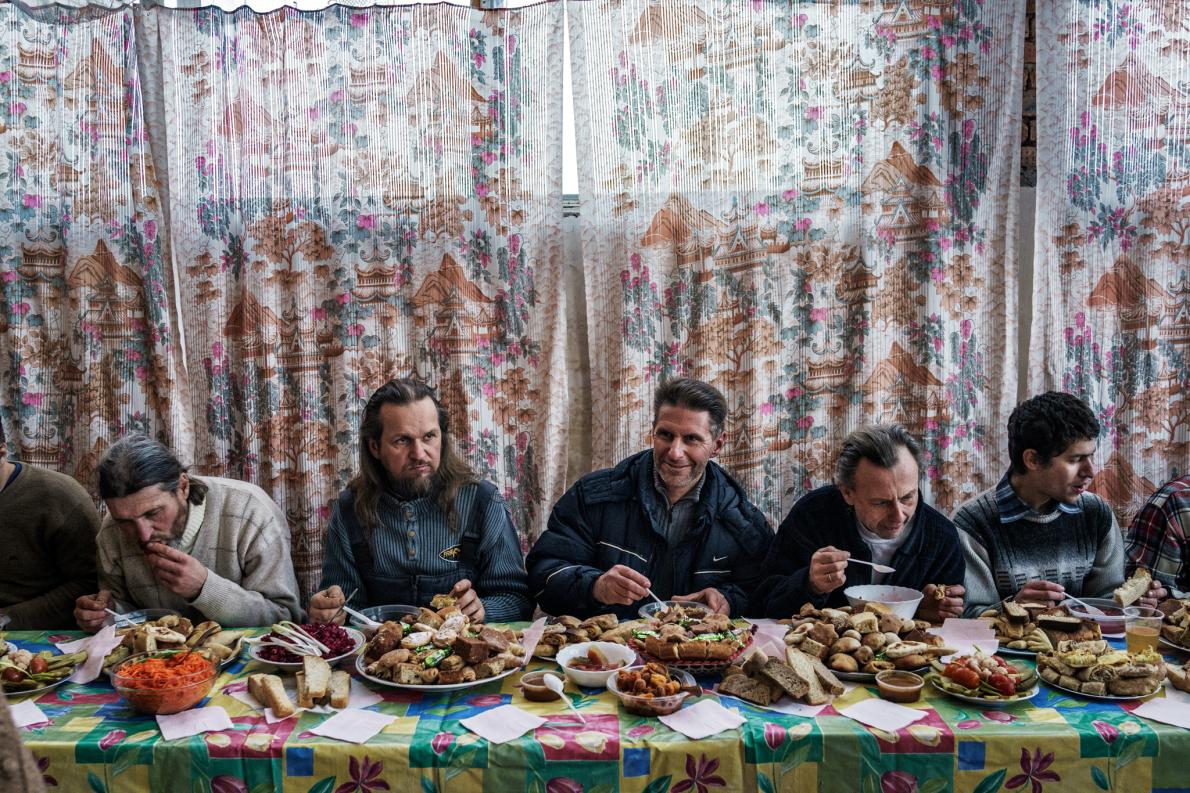 The man who claims to be the son of God loves to teach people about how valuable life can be. This is why Vissarion insists that anyone who wishes to join his cult needs to become a vegetarian.

So in case you were thinking about taking a trip to Siberia and visiting Vissarion, then you need to say goodbye to burgers. If you think this is strange, you will be shocked to find out what every one of his followers keeps in their house. 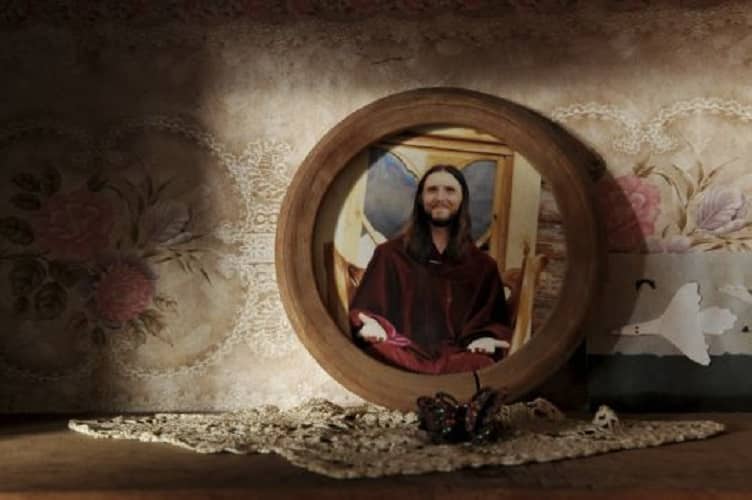 This portrait of Vissarion can be found in every room of every house that’s located near his church. These pictures are also considered to adorn public spaces by his followers and therefore, they can be found in all sorts of places from kindergartens to the doctor’s office. You won’t believe what he preaches about in his church!

13. Preaching About the Apocalypse 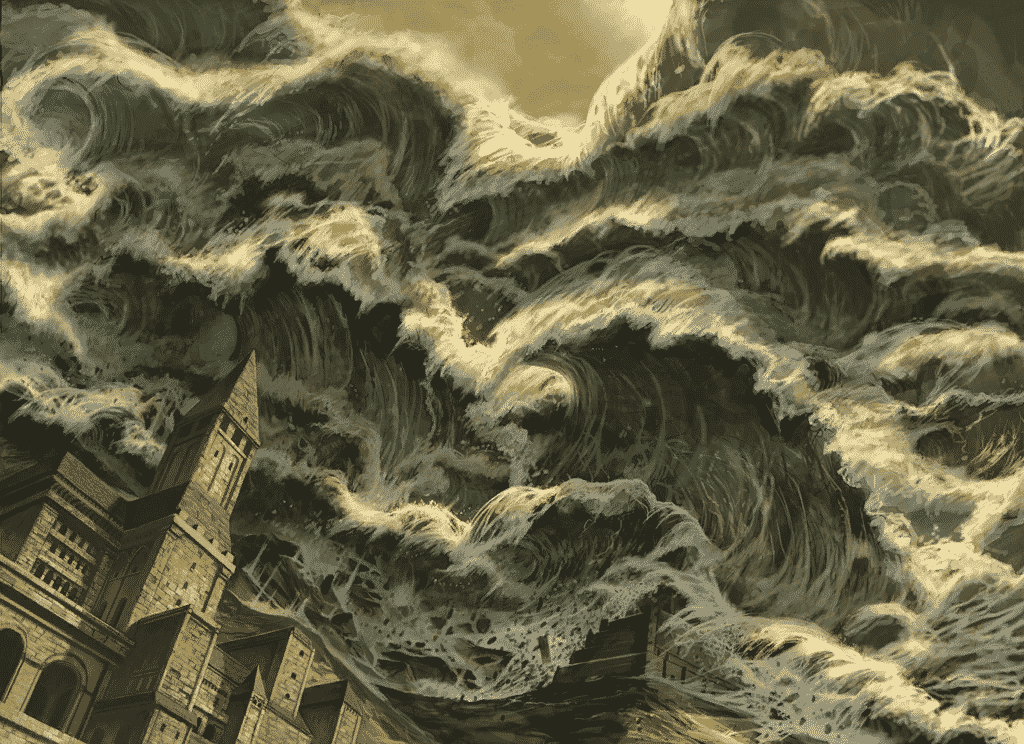 As previously mentioned, Vissarion preaches to his followers about the value of life. However, he is also telling people that a “great flood” is coming. I wouldn’t be surprised to see that his followers start working on rebuilding Noah’s ark. This is just one of his teachings since he also published a quite interesting book. I bet that you won’t guess what this book is all about. 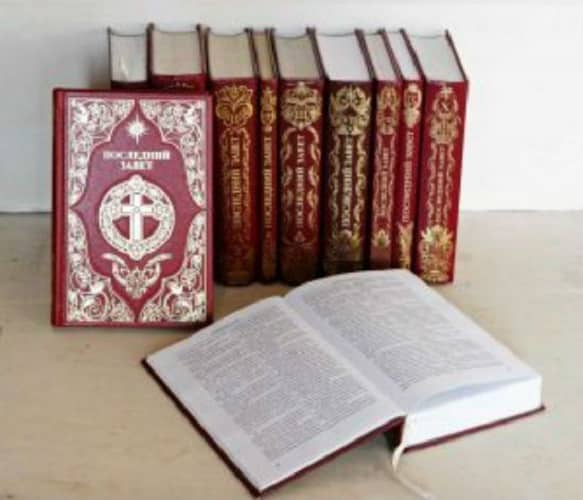 Vissarion decided to publish a 10-volume sequel to the Bible in which he shares his thoughts and views. While this might not seem that shocking, you need to see the things that Vissarion is writing about. 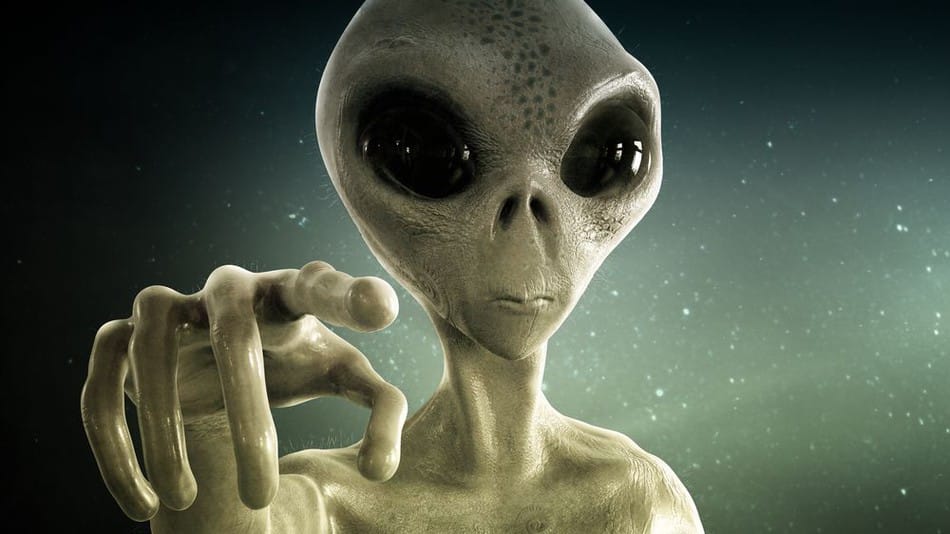 In Vissarion’s take on the Bible, he describes aliens and warns people of an upcoming apocalypse. Does this sound crazy? Yes, it does, but what else could we expect from a man who firmly believes he is the son of God? Crazy as this might be, you won’t believe what he tells his followers to do with their money. 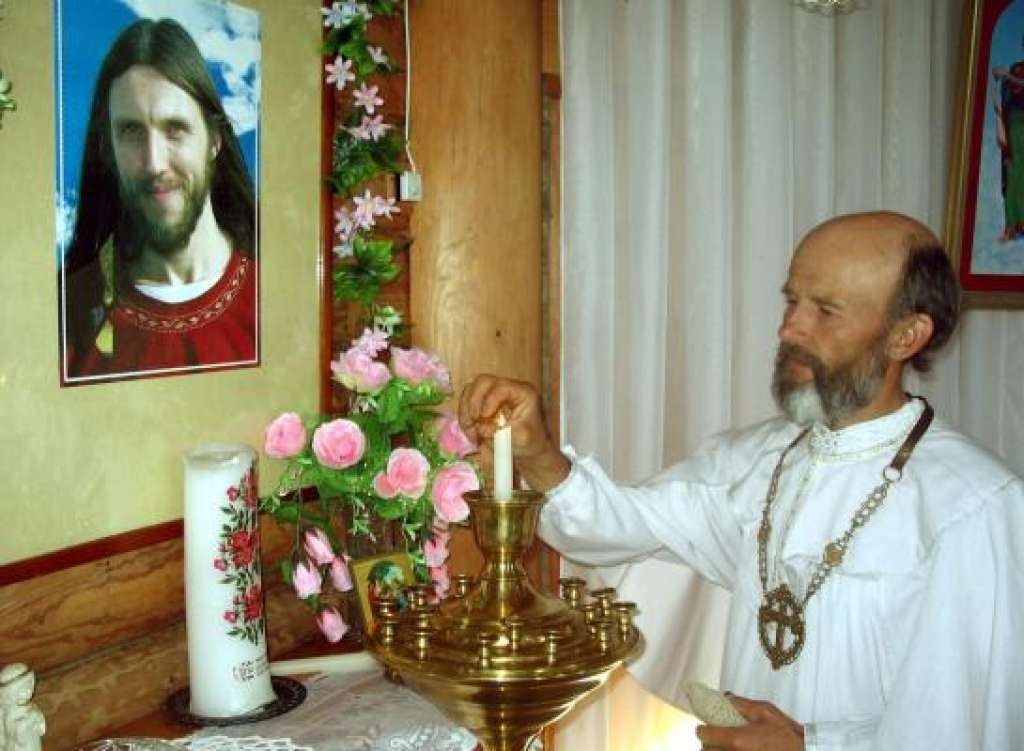 How does that old saying go, “Money is the root of all evil”? Well, Vissarion shares the same ideas since his followers are forbidden to use money. It seems like he is trying to create a perfect utopia since these next rules he is imposing on his followers go along perfectly with the “no money” rule.

9. No Drinking or Smoking 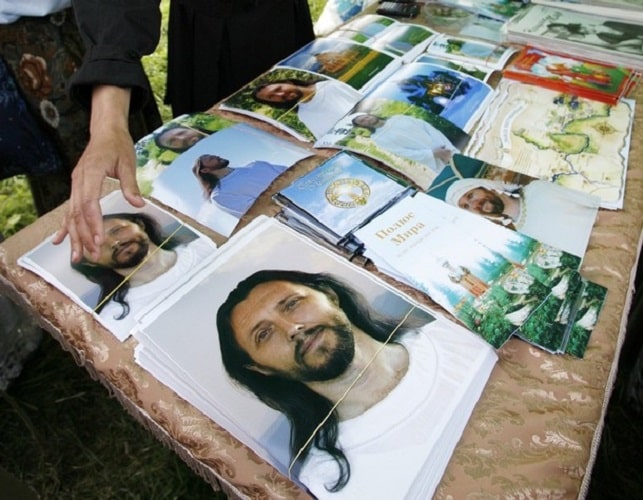 Previously we talked about how Vissarion is telling his followers not to eat meat or to spend money. However, Vissarion is taking it up a notch by banning alcohol and cigarettes from his religious movement. Vissarion is claiming that his followers need to live a life of ecological principles and that’s why they need to follow his rules. 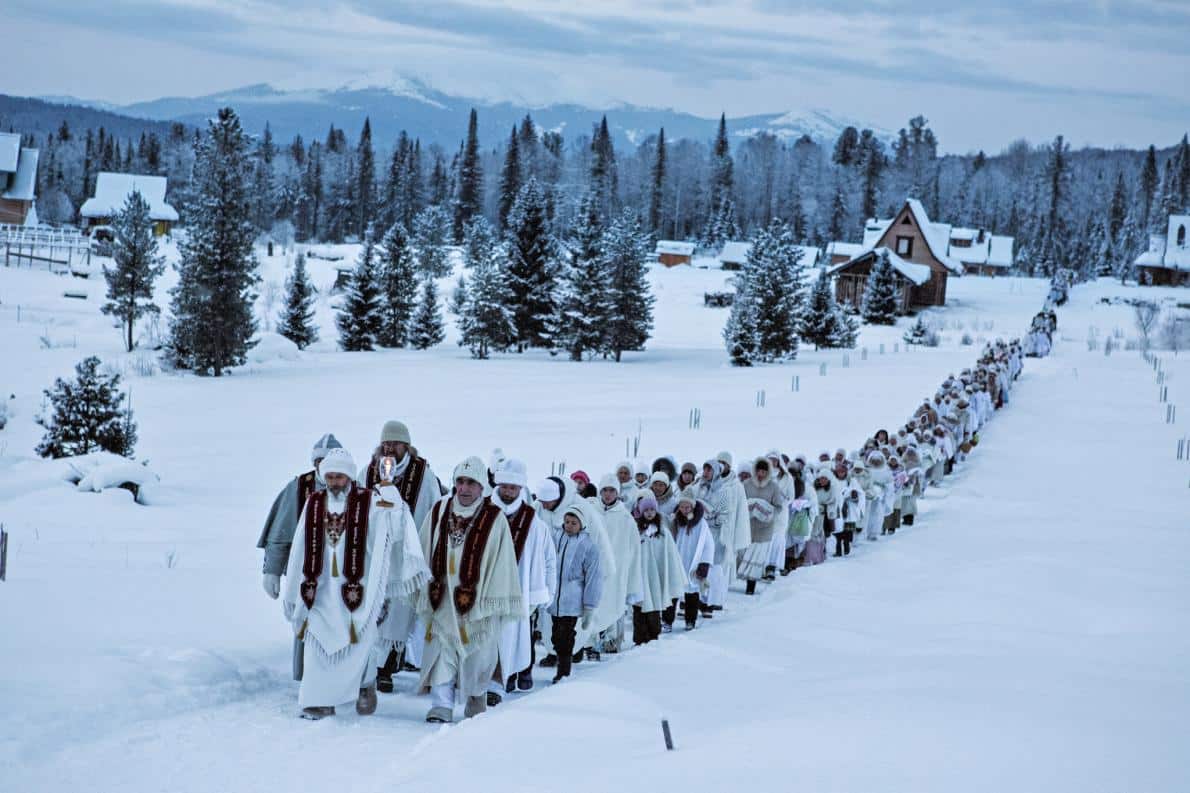 One of the traditions that Vissarion’s disciples love to do is Christmas pilgrimage. Every year, priests who are holding candles lead long lines of people through the harsh lands of Siberia. These followers sing psalms together and they spread the word of Vissarion. The question that everyone asks after hearing about Vissarion’s story is if he is brainwashing his followers. Stick around to find out the answer to this question. 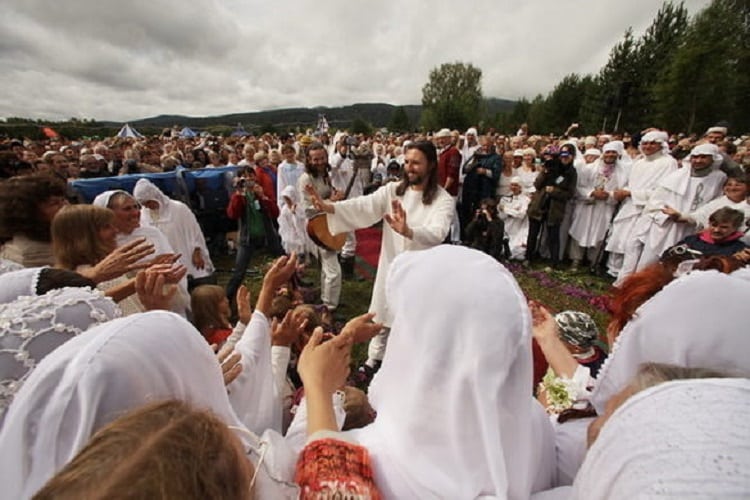 Vissarion went on an interview where he was directly questioned about brainwashing people. The self-proclaimed son of God said that he cannot control what other people believe and that he feels sad for being accused of such a thing.

What’s interesting is that scientists actually have an answer to why people are following this Russian man. But this is the surreal real reason why people are so glad to join him and his close circle of followers. 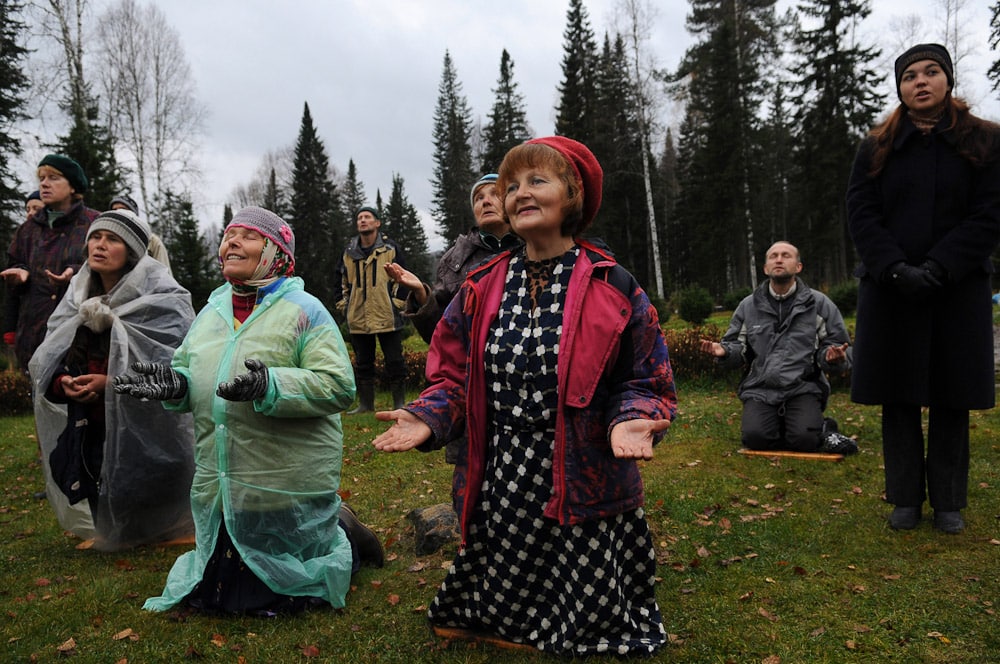 Scientists are theorizing that the reason why Vissarion has so many disciples is that he offers them tangible belief. This means that his followers see him as the answer to their prayers and the second arrival of Jesus Christ. 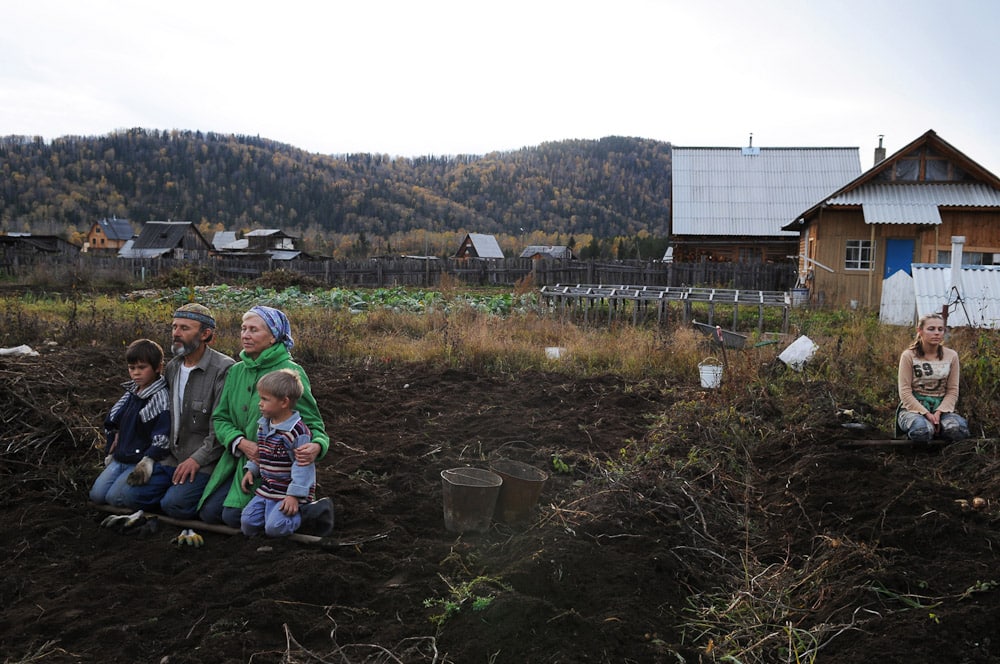 This picture shows a family that’s sitting on their knees and praying to God and Vissarion. They are praying for a healthy crop that’s going to feed them and the rest of Vissarion’s followers. However, it’s not all work and pray. These people do have fun sometimes, just look at the next picture and see how Vissarion likes to have fun. 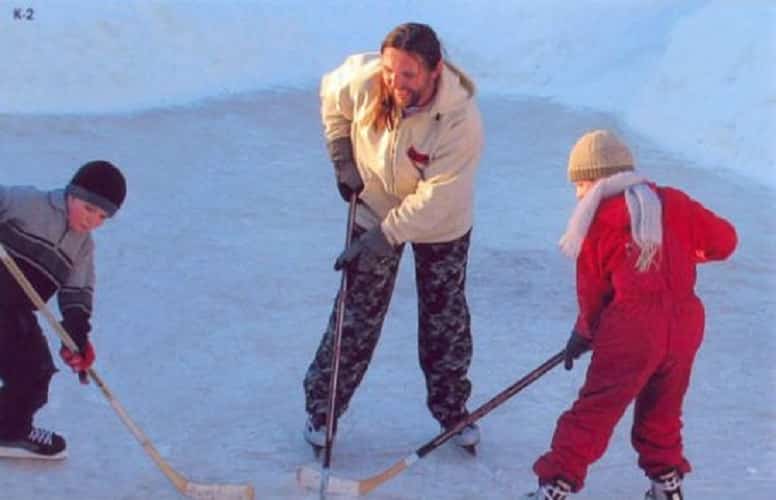 This is how Vissarion looks after he gets out of his “holy” clothes. A little fun never hurt anyone! Even though he looks like a normal guy in this picture, he is treated like a king as you can see in the next two photos. 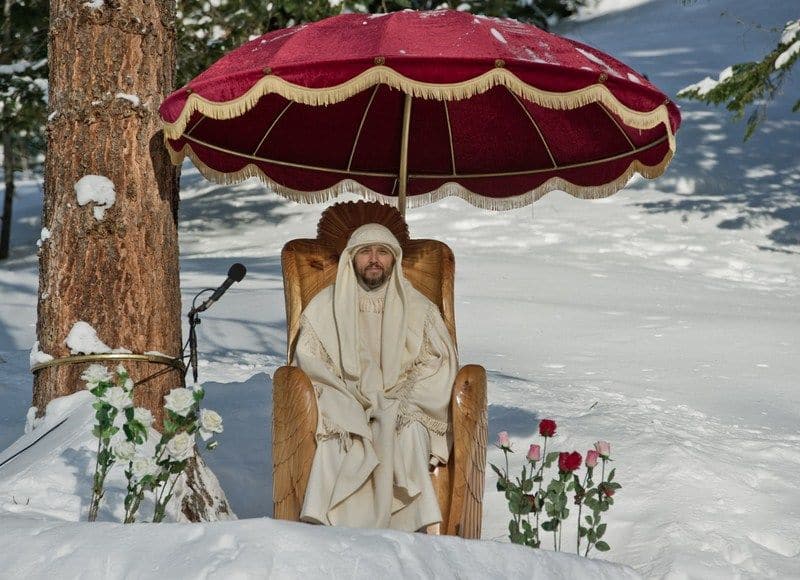 It looks like the self-proclaimed holy man doesn’t like sitting in the sun when he is giving speeches. No wonder he feels like the son of God when he is being treated like a king. Nonetheless, this next picture tops them all off. 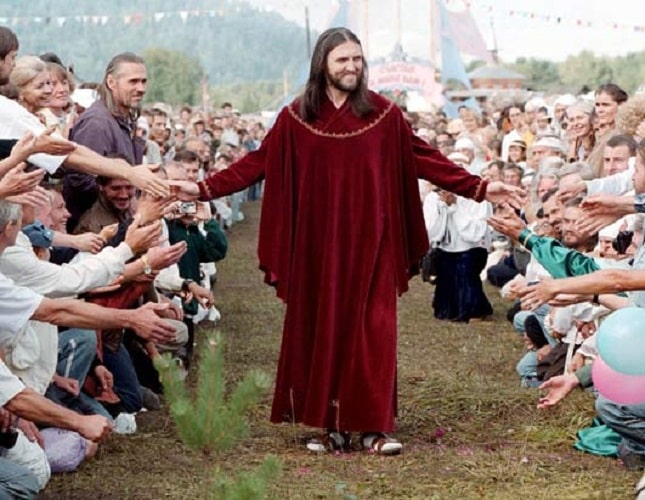 Even though this man is trying to act like Jesus, in this picture he looks like a celebrity that’s walking on the red carpet, he even has the matching robes.

1.From Cop to Jesus Christ 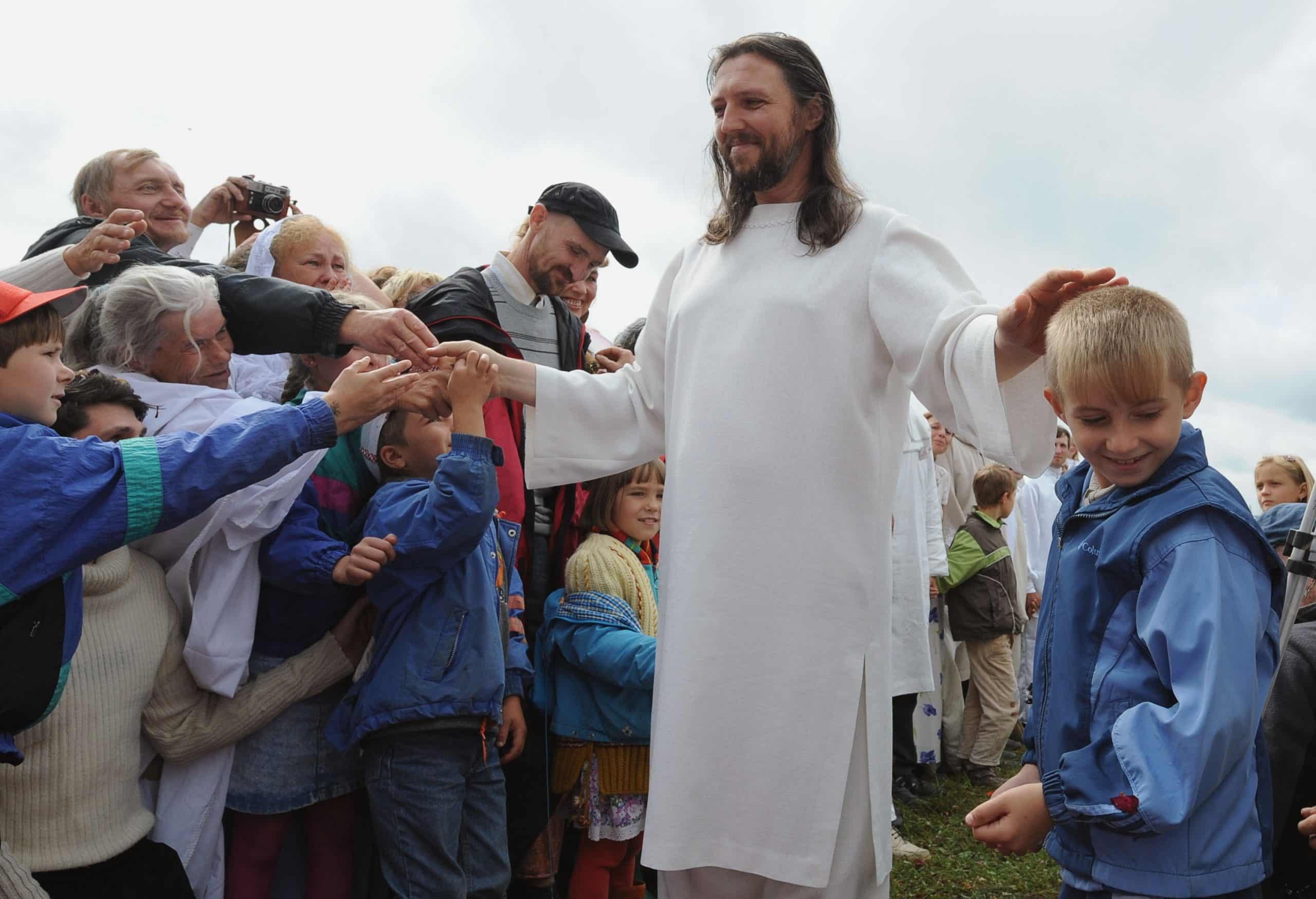 If there’s something we can take from this man’s story, it has to be that if we believe hard enough, we can become anything or anyone we want. This man went from a traffic cop to becoming the reincarnation of Jesus in Siberia. Even though this is weird for the most of us, we have to admire his dedication.