When it comes to the big day, everyone wants to look amazing. Celebrities have a very important role in inspiring future brides in choosing the perfect wedding gown. Seeing the most famous wedding dresses throughout history it’s a feast for the eyes. Be it long, short, wide or tight, with a lot of tulle or thousands of embroideries, made from Brocade, Chiffon, Damask, Silk, Velvet, Taffeta and so on, we chose some of the most famous wedding dresses that have been worn by celebrities.

Our favorites are #2 Marilyn Monroe and #19 Audrey Hepburn! Even Yoko Ono looks amazing at #17, and Kate Moss at #7. 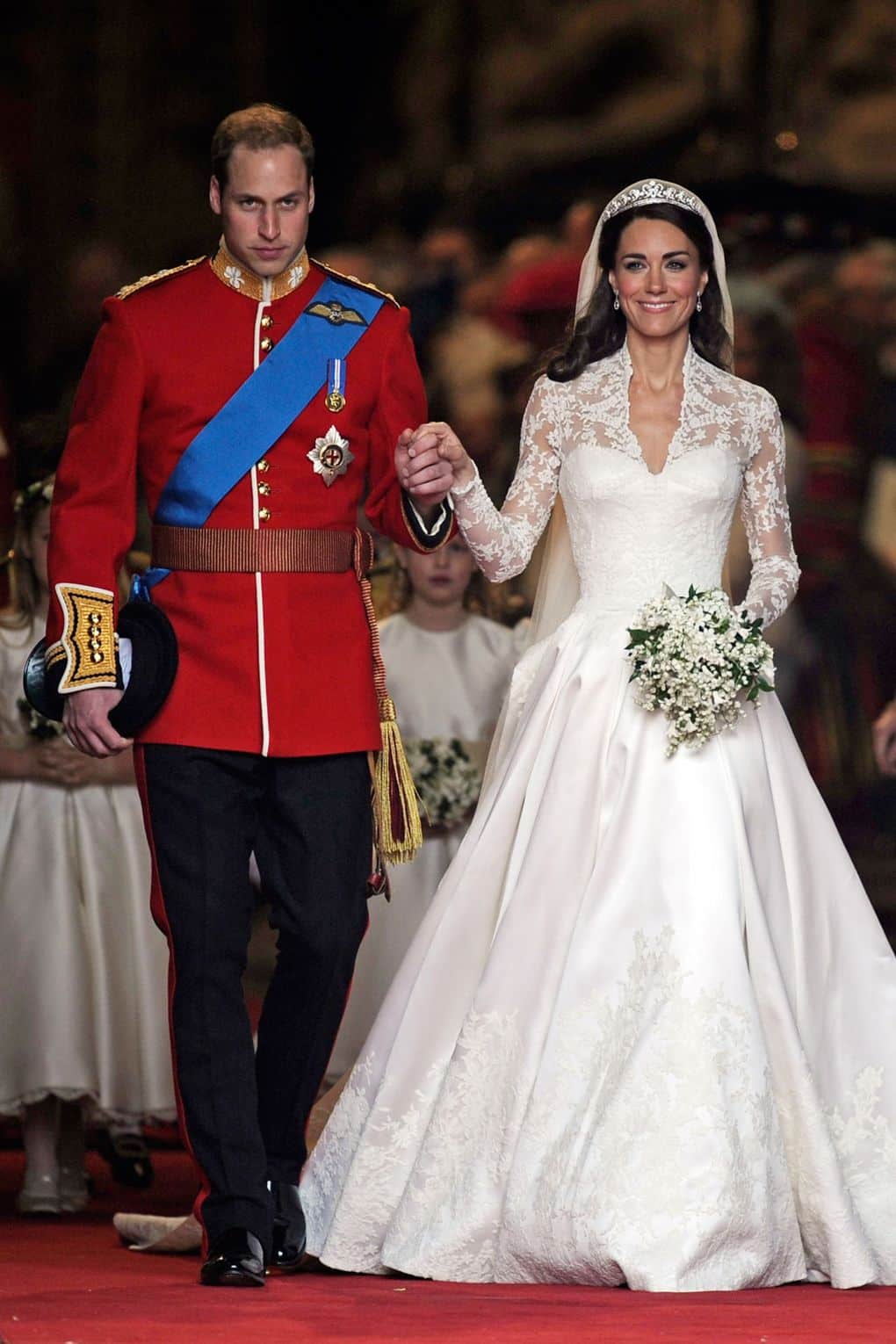 Kate’s Alexander McQueen wedding dress was kept a secret for six months before seeing her make a stunning entrance into the Westminster Abbey. Kate Middleton married Prince William in 2011, becoming Duchess and Duke of Cambridge. 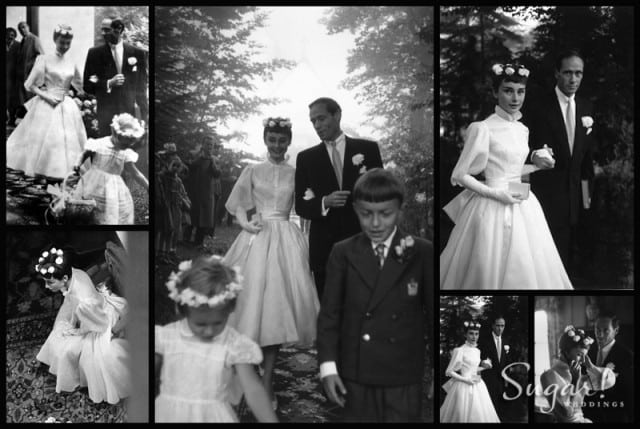 Let’s go back to 1954 when Audrey married Mel Ferrer. Her dress was made by Pierre Balmain and it looked like a ballerina full skirt.

You won’t believe how good Beyonce looked in her wedding dress at #15! 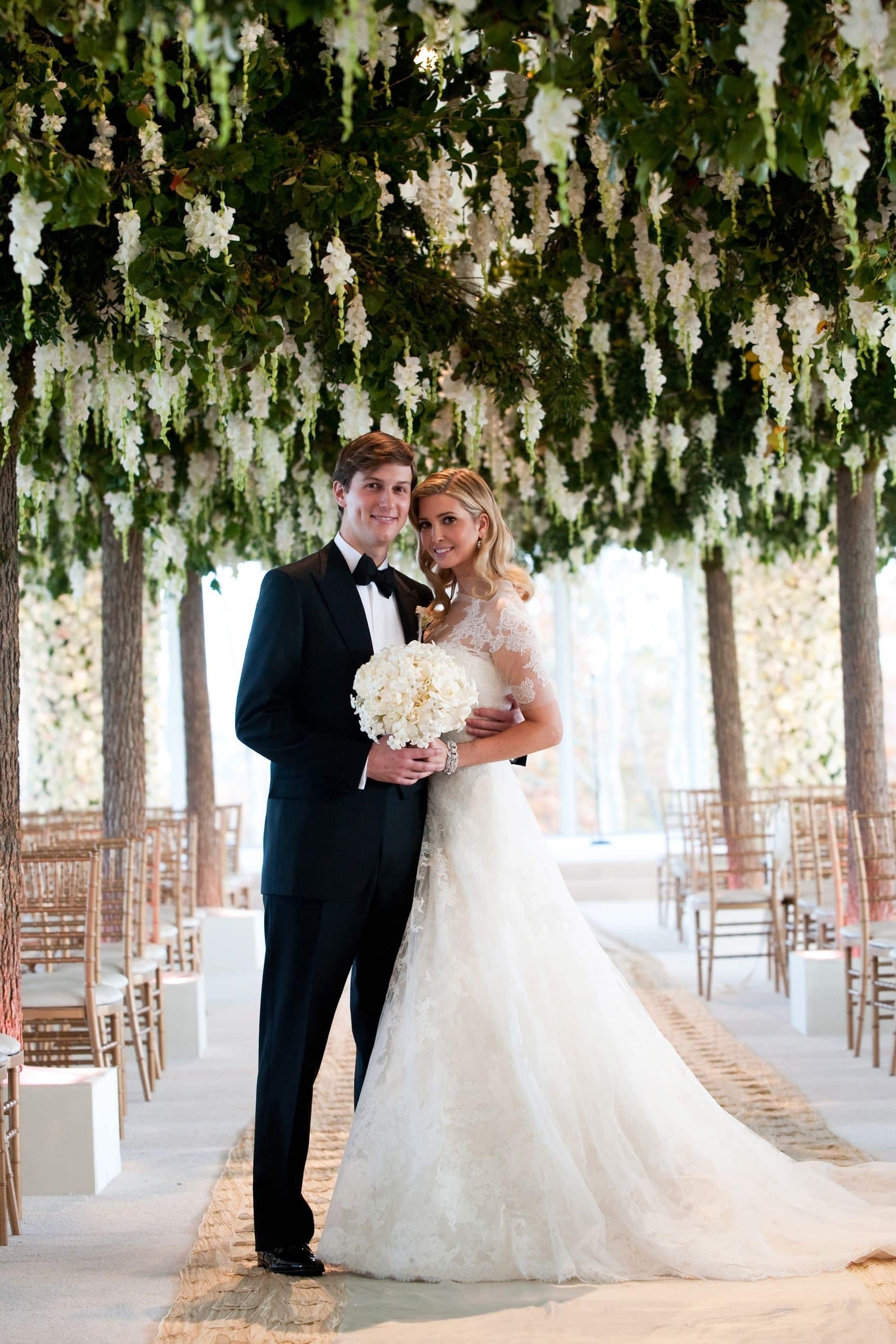 Ivanka Trump married Jared Kushner in 2009 and wore an amazing looking gown created by Vera Wang. The gown was inspired by Grace Kelly’s iconic wedding dress that you will see at #3. Ivanka wanted a comfortable dress, as she planned on dancing all night! 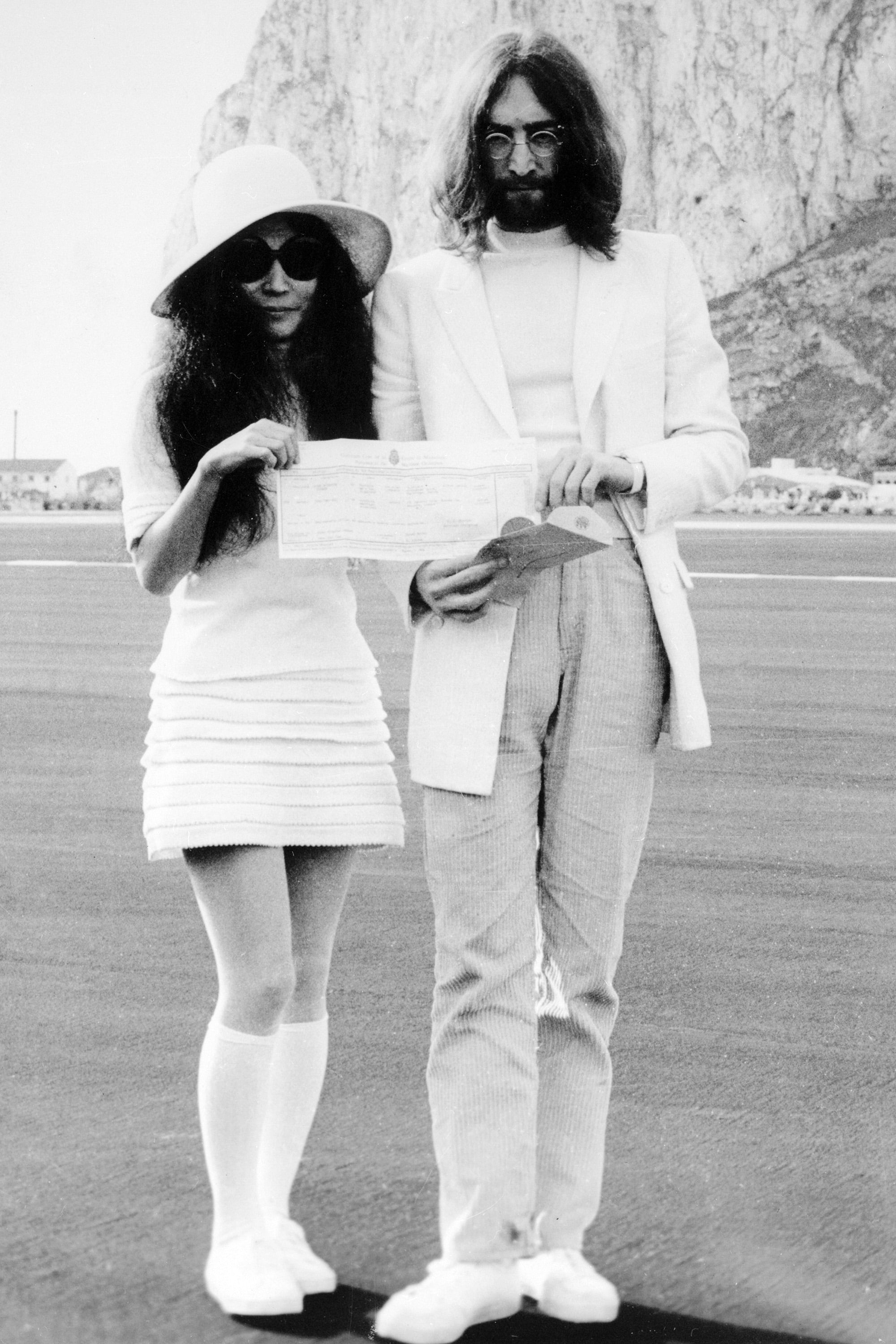 Sweet sixties: 1969 shows us Yoko Ono’s minidress with accessories such as oversized glasses and a sun hat. Check out this other bride that shocked us with her wedding dress at #10! 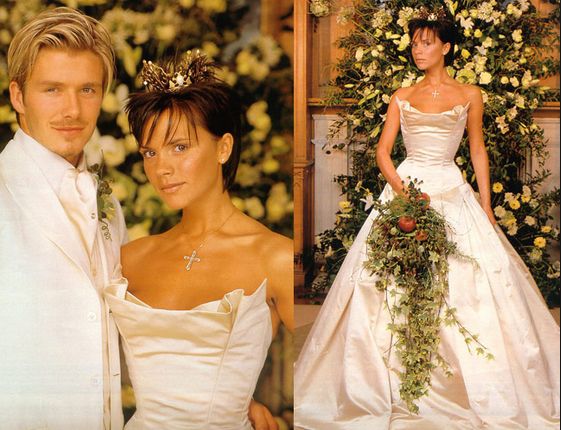 In 1999 we all saw what Victoria Beckham wore to her wedding day: a Vera Wang satin strapless gown that showed her slim waist. The upper details complimented her short hair which was donned with a small golden crown. Did you know that the Beckham couple had custom made thrones at their wedding?

If you haven’t been amazed yet, just wait until you see Gwen Stefani’s pink dress at #14! 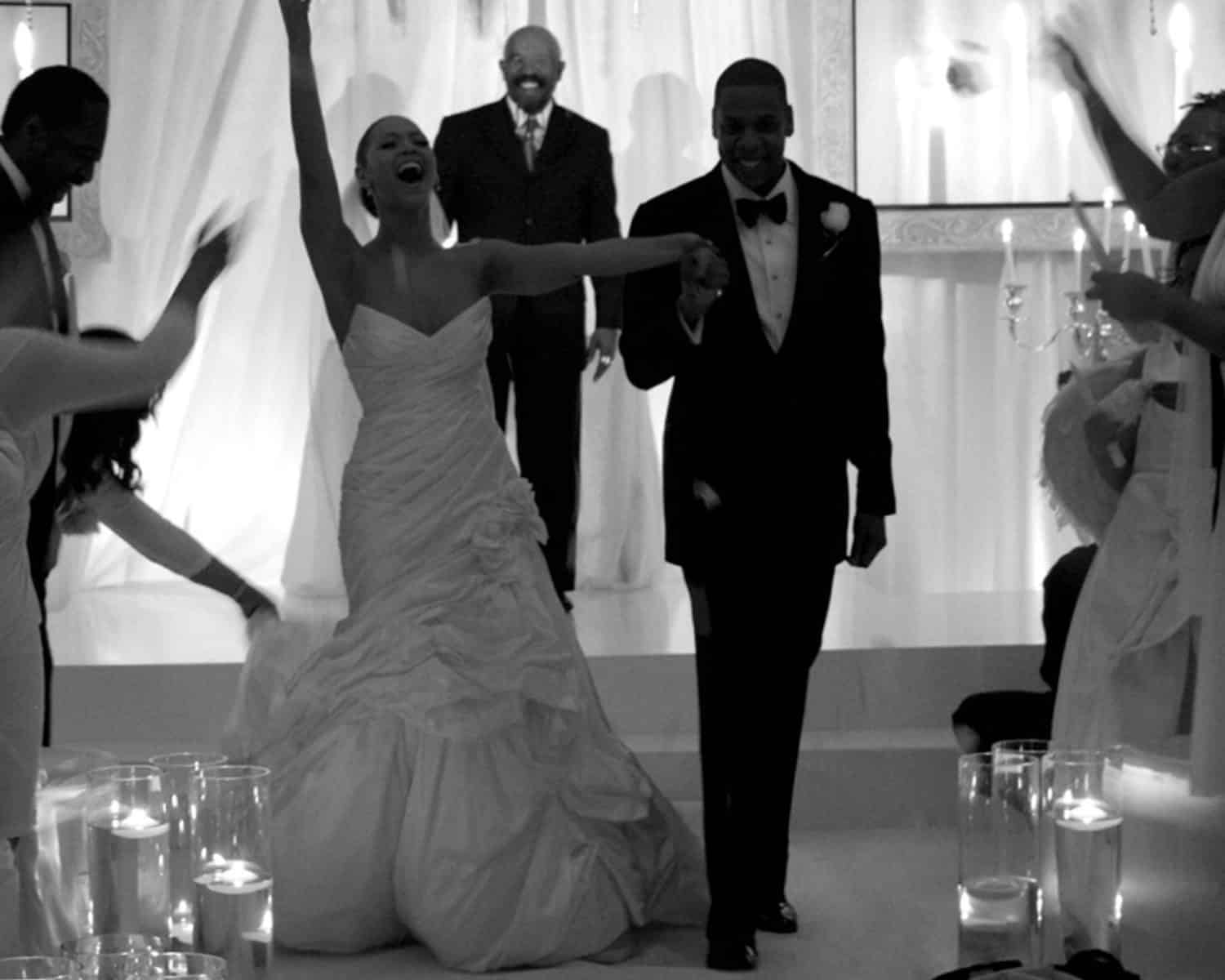 All brides are happy on their wedding day but look at the queen of R&B. Although she didn’t actually like the dress, which was designed by her mother, Beyoncé wore it gracefully. Taking about grace, you should see #4! 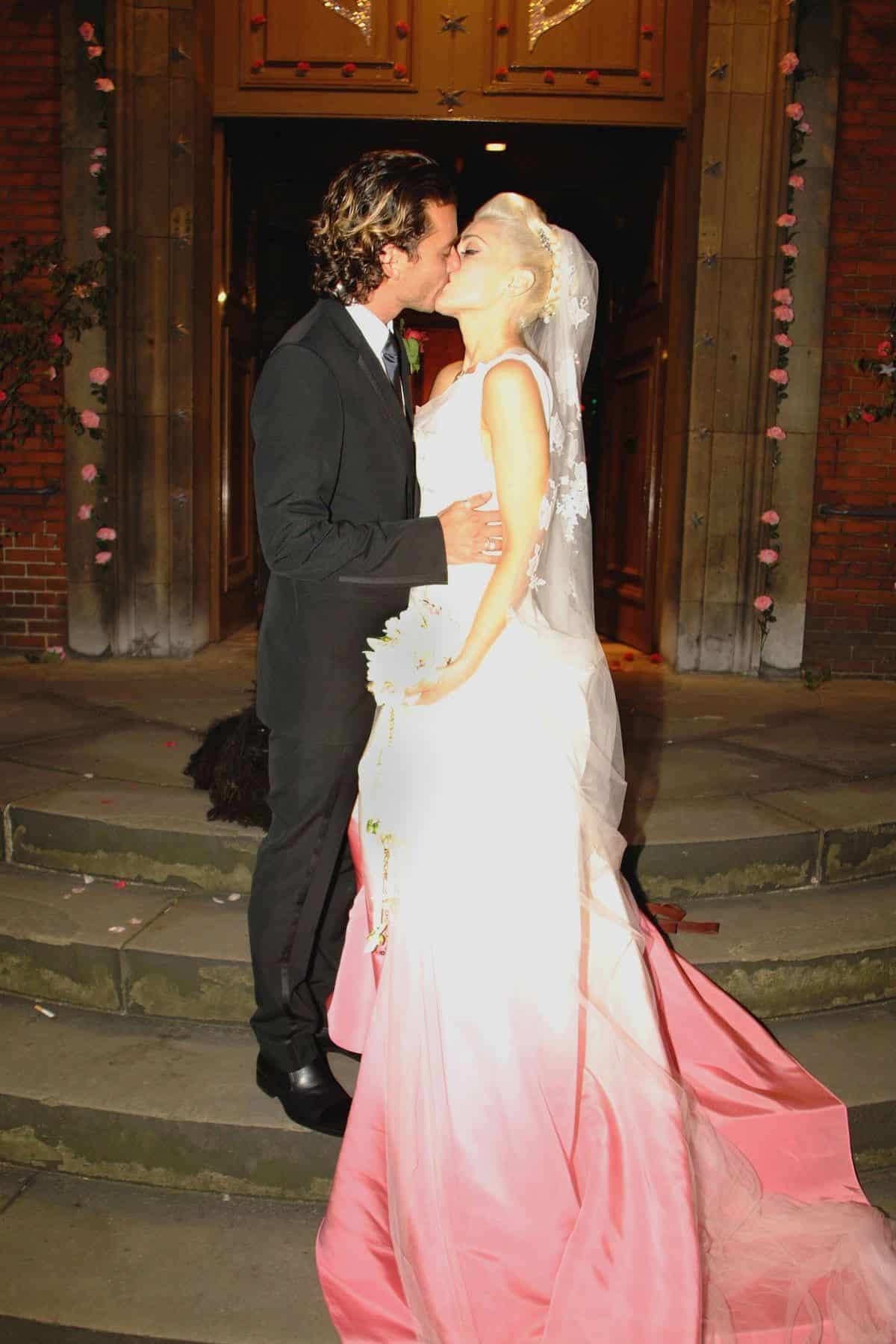 Gwen Stefani wore on her wedding day a John Galliano pink gown. The wedding dress was afterward donated to Victoria & Albert for a Wedding Dresses exhibition, as the bride considered her gown to be a ‘piece of art’.

Talking about pieces of art, Jennifer Lopez looked like a princess on her wedding day. Check her out at #9! 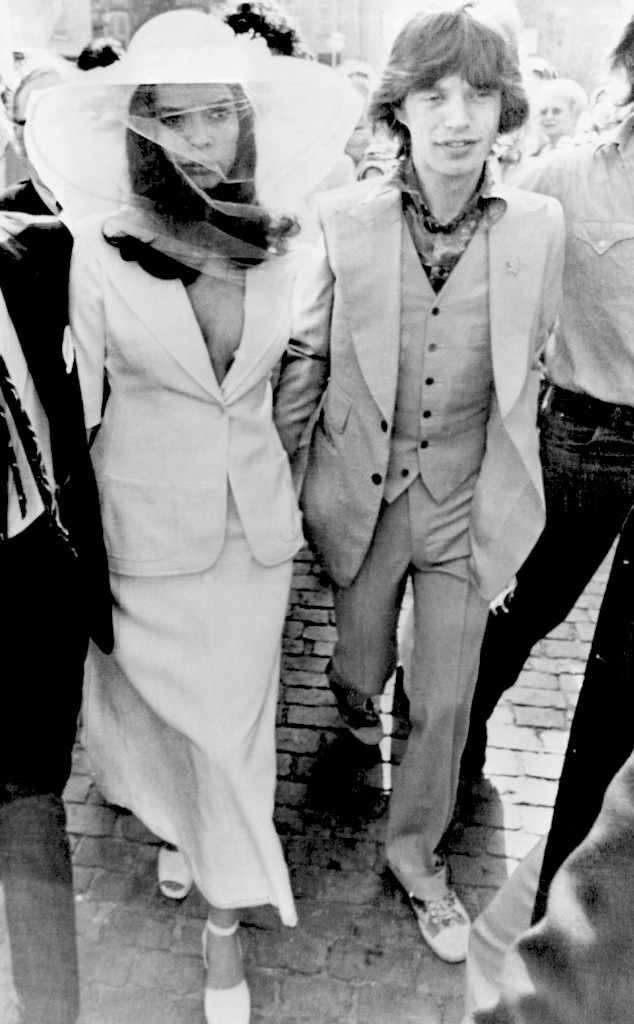 Mick Jagger’s bride considered that a traditional wedding dress just wasn’t right for her. The couple married in 1971, with Bianca Jagger wearing a white skirt suit that was created by the Savile Row tailor, Tommy Nutter. She wore nothing under the jacket because the shirt that the designer made no longer fitted the four-months pregnant bride. 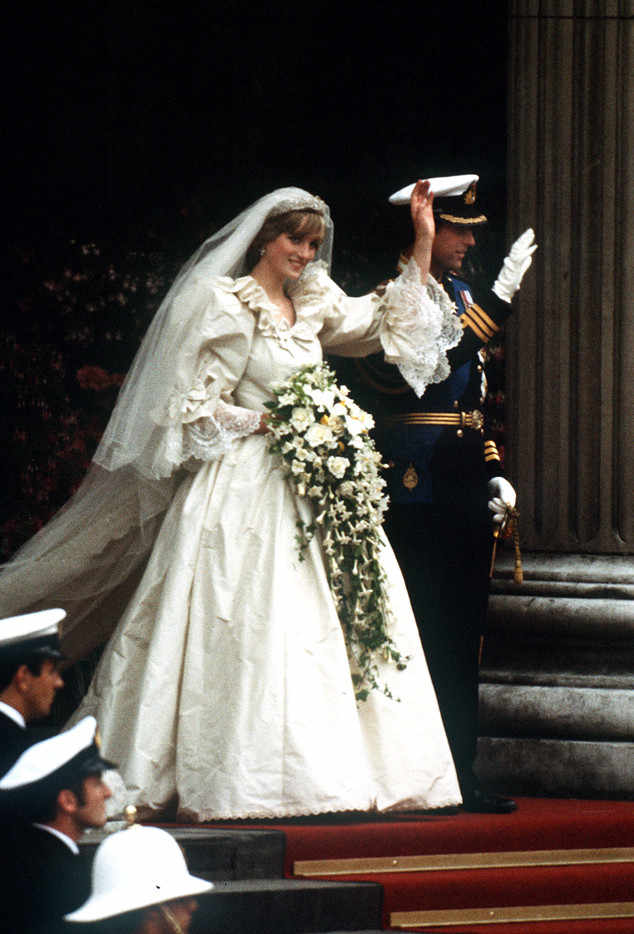 David and Elizabeth Emanuel are the designers behind Princess Diana’s huge wedding dress. Her gown had a 25-foot train, being the longest one in royal wedding history. She wore the dress in 1981 for her wedding with Prince Charles. Diana’s dress was an inspiration for this bride at #5! You’ll never guess who she is! 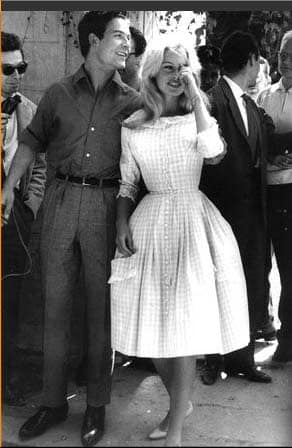 She wore a pink gingham dress for her wedding to Gunter Sachs in the summer of 1966. She was married four times but this was the most appropriate dress for a wedding in Las Vegas! The next star celebrated marriage seven times! 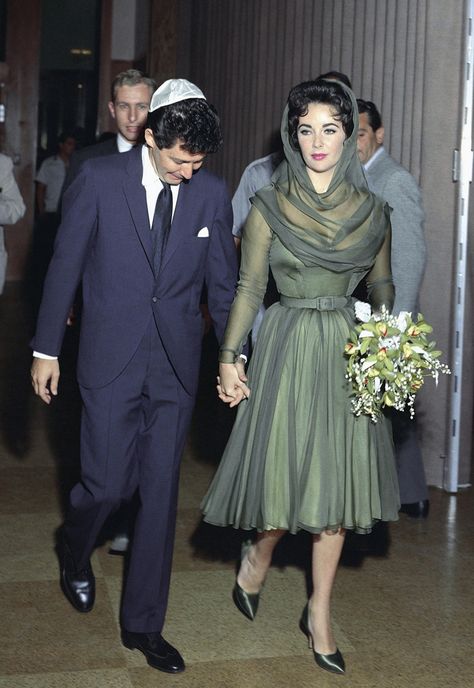 The actress had seven husbands and in this gown, she got married to her fourth husband, singer Eddie Fisher. We love the short green dress, which together with the bouquet of orchids make her look like the goddess of the forests!

As we mentioned before, she got married 7 times. At #6, you’ll see her rocking another gown that looks even more amazing. 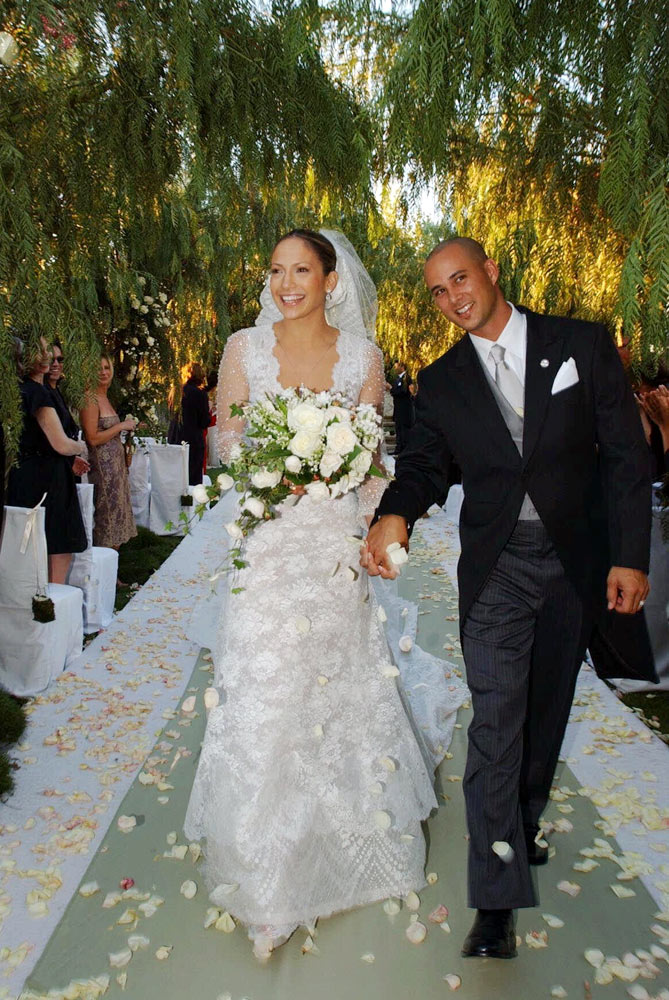 ‘Jenny From the Block’ wore a romantic Chantilly lace gown by Valentino to her wedding with Cris Judd. Unfortunately their happiness didn’t last long, as they divorced about a year later.

The next star takes elegance to the next level! No wonder Frank Sinatra picked her to be his bride. 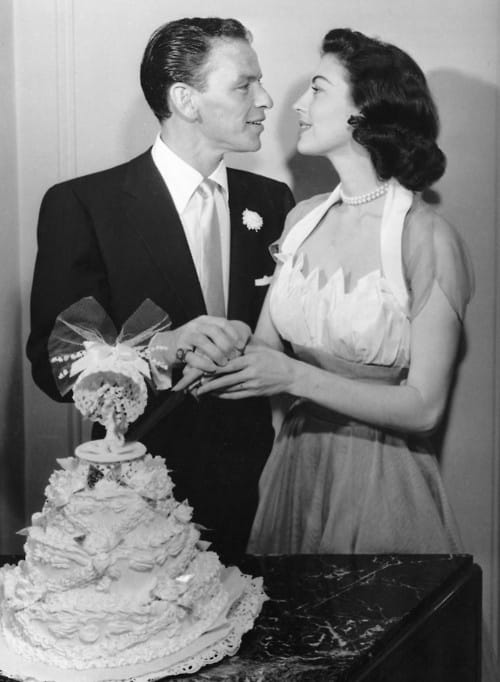 Ava Gardner married Frank Sinatra in 1961 and wore to their wedding a halterneck dress, completed with a sheer shawl. Both of them have been married before, this being Ava’s third wedding and Frank’s second one. Talking about sheer details, check out the next adorable chiffon wedding dress! 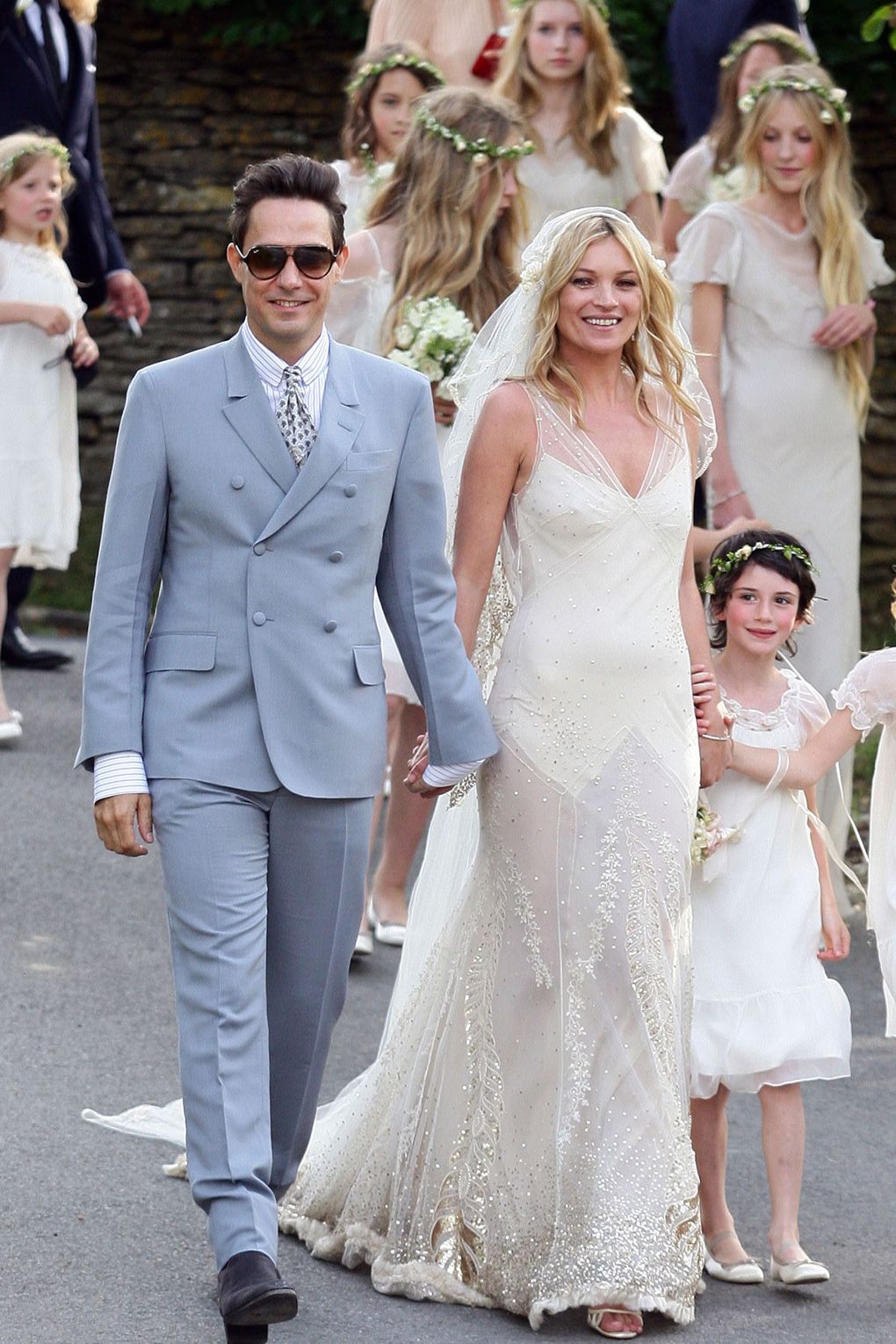 On her wedding day, Kate Moss wore a John Galliano gown, inspired from the chiffon thirties gowns. Not only it looks fragile and sheer, but it’s also comfortable and couture. Kate Moss adored the dress that she later had it exhibited in the Victoria & Albert Museum in 2014.

Elizabeth Taylor looked absolutely ravishing on her wedding day, see for yourself in the next photo! 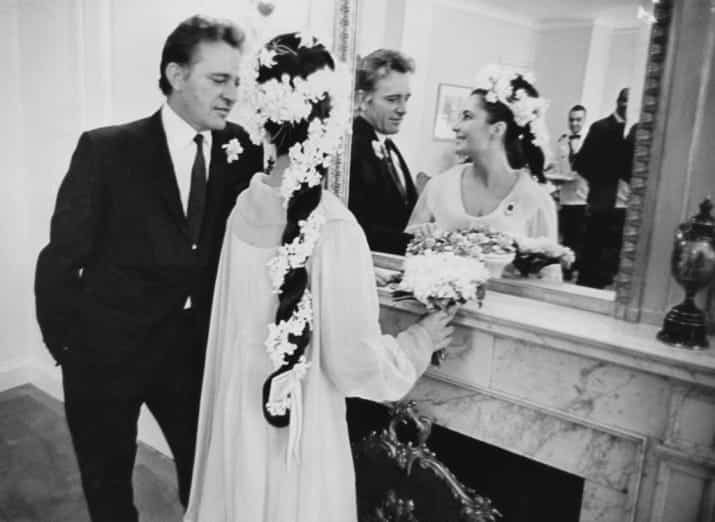 Irene Sharaff created the canary yellow dress for Elizabeth Taylor’s wedding with Richard Burton. She also had a dramatic braided hair weaved with hyacinths and lilies of the valley. On the right side, she is wearing a Bulgari brooch full with diamonds and emeralds!

But no one can compete with Mariah Carey when it comes to class! Check her out in the next photo! 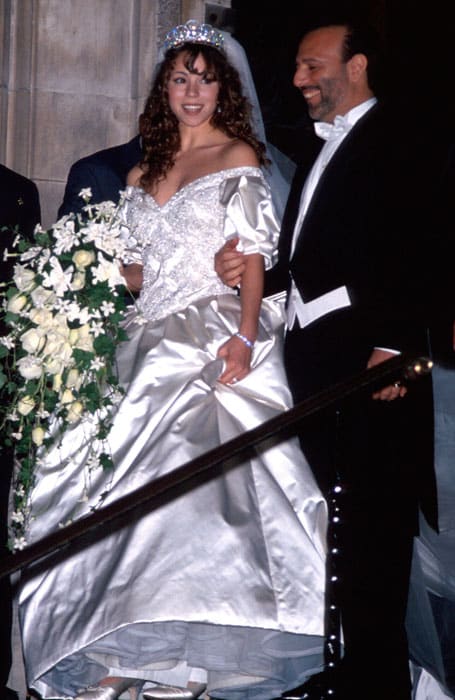 Mariah Carey went full-on princess to wed Tommy Mottola in 1993. She was inspired by Princess Diana’s dress and had a 10-foot veil and a 27-foot train, all designed by Vera Wang. 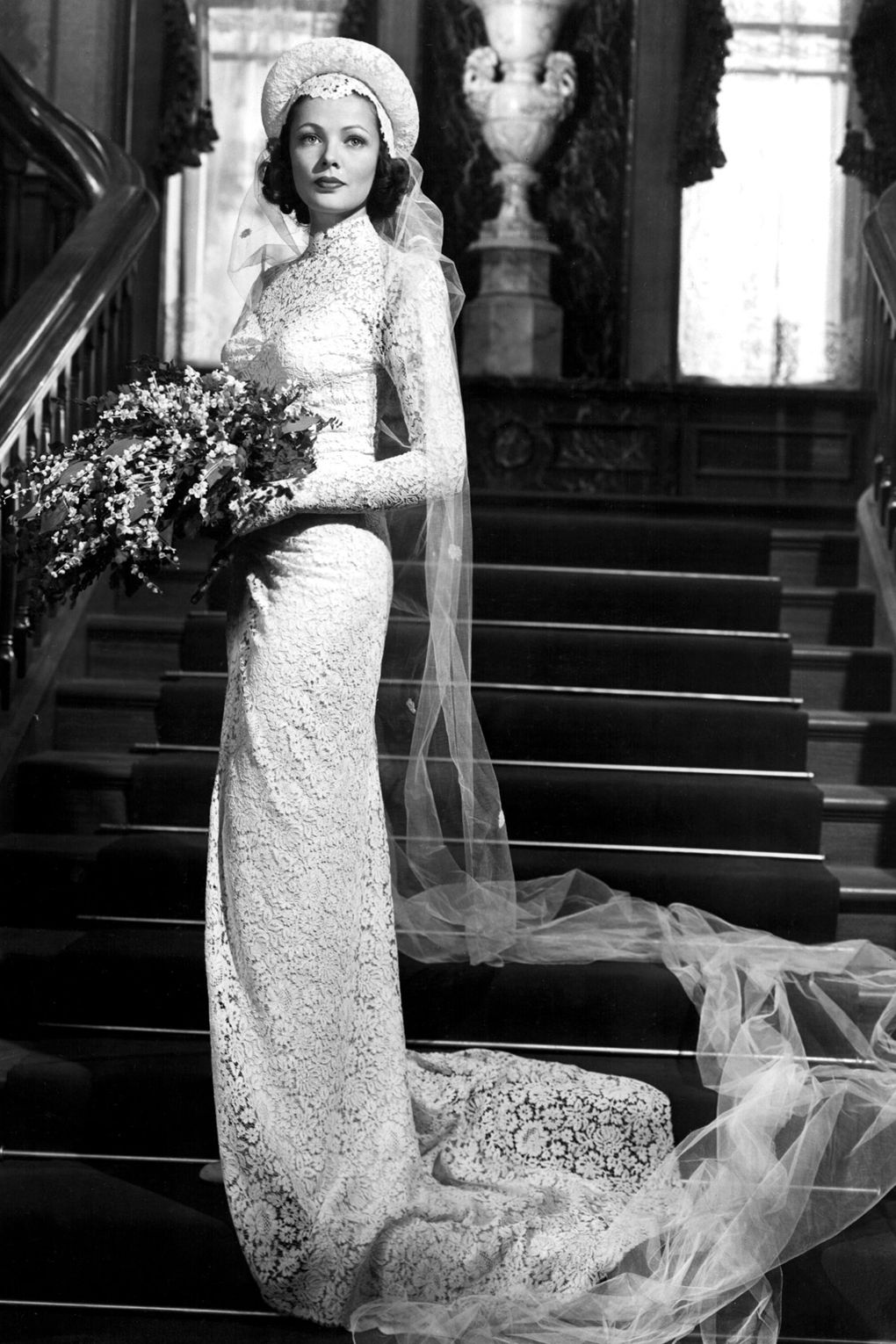 Our favorite is the slim figured bride, Gene Tierney, the epitome of elegance and classic beauty. And in case you didn’t know, the full-sleeved lace gown was designed by her husband-to-be Oleg Cassini. Unfortunately, she didn’t get to wear it for the real weeding because they eloped to get married in Las Vegas. 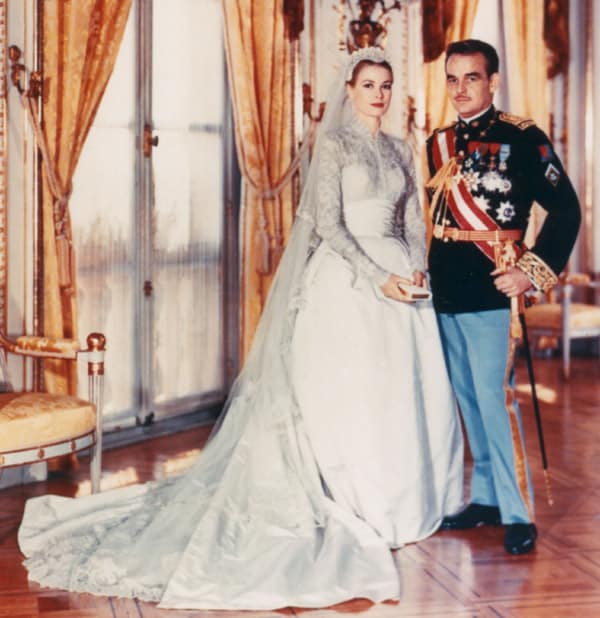 In 1956, Grace Kelly wore at her wedding to Prince Rainier an impressive gown that was designed by Helen Rose – the MGM costume designer. It was created from 25 yards of silk taffeta, antique rose-point lace and pearls, all worked by three dozen seamstresses. They worked for six weeks on this amazing dress. 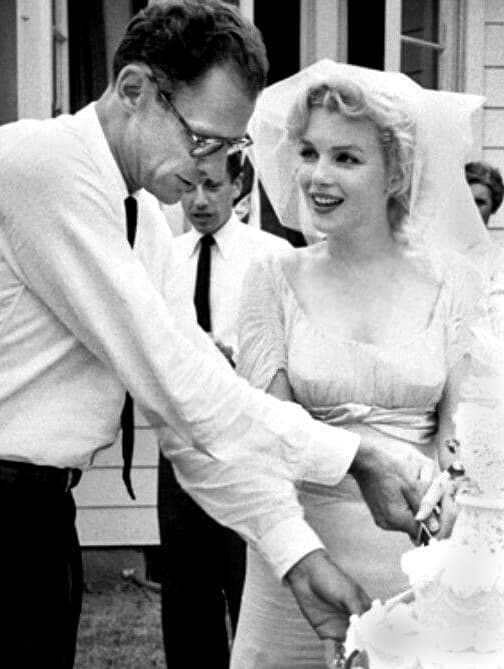 From absolute detailed work on Grace Kelly’s wedding gown, we get to Marilyn Monroe’s simple dress. She wore it to her wedding with Arthur Miller, and had a chin-length veil to complete the whole style. She looks completely ravishing, as we see her smiling at the man she loved. 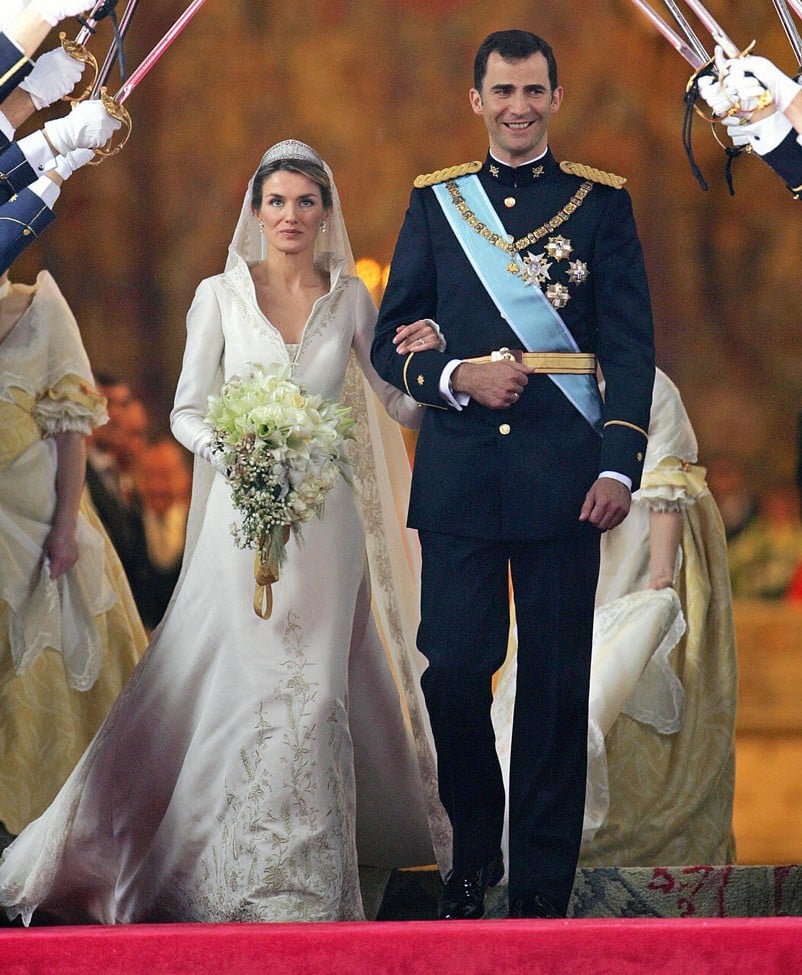 Princess Letizia’s wedding dress is our favorite, as it screams ‘royal’ to its very core. It’s simple, yet has intricate patterns, it’s made from natural silk woven with silver thread. The high collar is embroidered on both sides and completes the royal look. Her veil was three meters long and two meters wide!