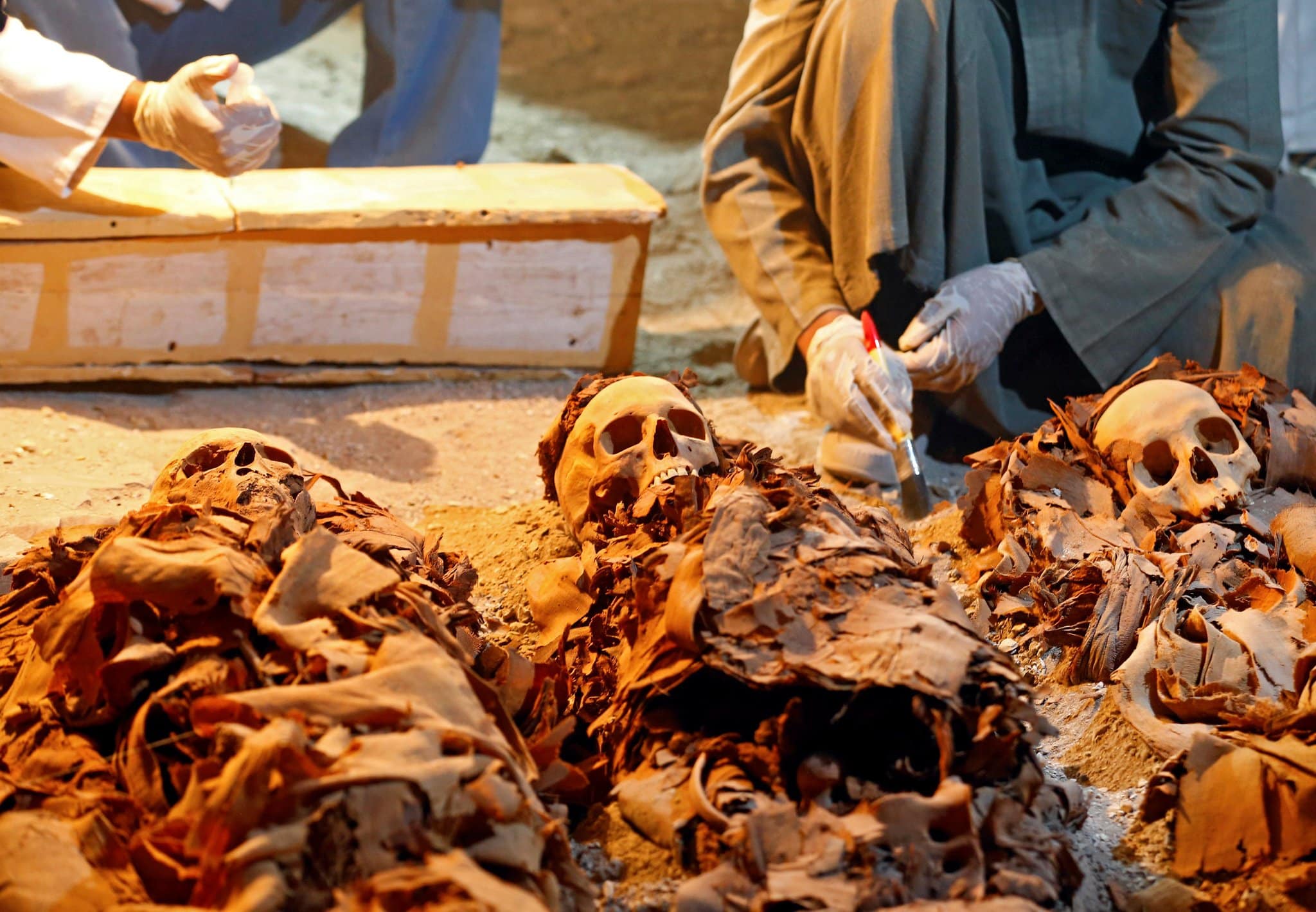 In September, archaeologists discovered a 3,500-year-old tomb in Luxor, Egypt, and what was staring them in the face as they opened the entrance, revealed important of information about who it belonged to. The tomb was found near the “Valley of Kings”, located in the Dra Abul Naga near the west bank of the Nile. It’s the first tomb in a long time to give us more information about ancient Egypt… 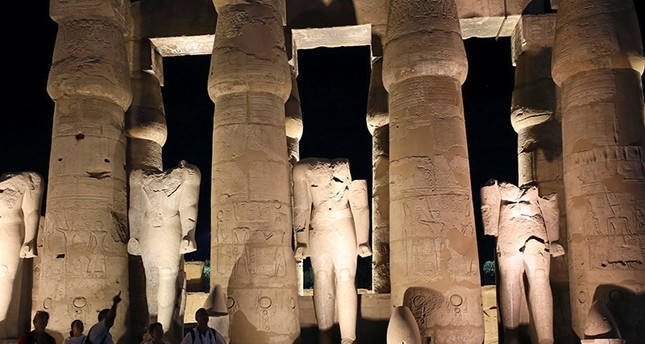 As researchers pried open the entrance, they were greeted by a decaying statue of a goldsmith and his wife. The tomb is rather large and is filled with mummies, statues, pottery, and many other artifacts. The tomb is one of the greatest discoveries found thus far, and it took nearly five months of non-stop digging for the team to finally find what they were looking for… 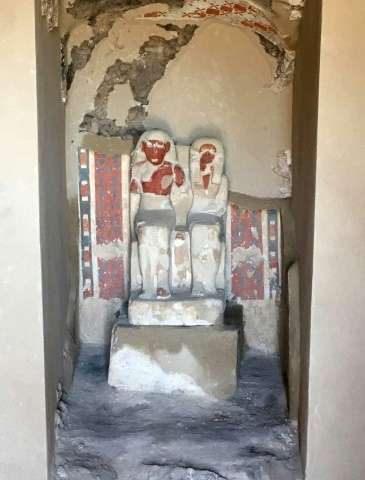 The tomb belonged to a royal goldsmith named Amenemhat. Due to Amenemhat’s royal status, his tomb is rather extravagant, as he spent his time working to create pieces dedicated to an ancient sun god. The jeweler is believed to have lived during the 18th dynasty and focused his work on the most popular diety at the time, Amon-Re. 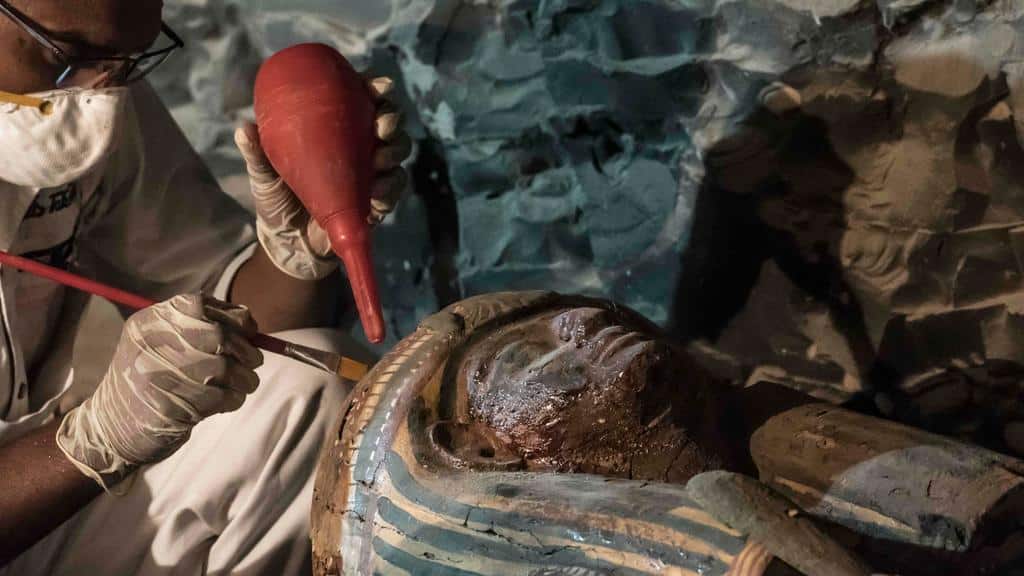 The tomb is set up with the statue of Amenemhat’s family, including his wife beside him, and his son in front. As you progress into the tomb the next sight is where the multiple mummies were kept. There were also decorated sarcophagi which were meticulously cleaned to show their former glory. 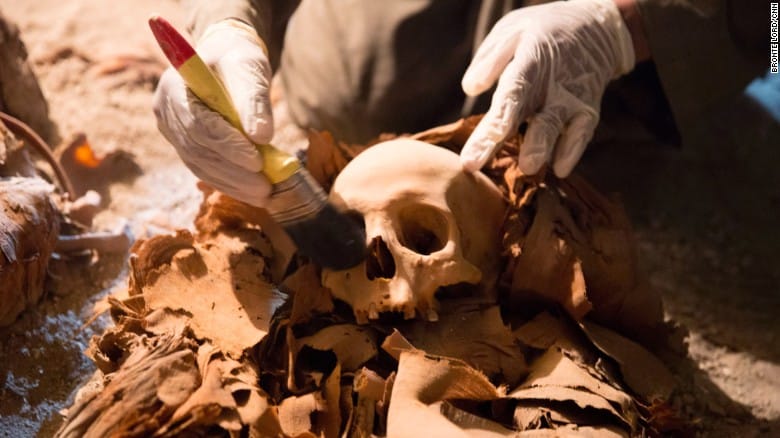 In the first chamber, there are still more artifacts found, such as wooden funerary masks and various statues honoring the couple. When they made their way into the second chamber, they found more sarcophagi, but these were from the 21st and 22nd dynasties. 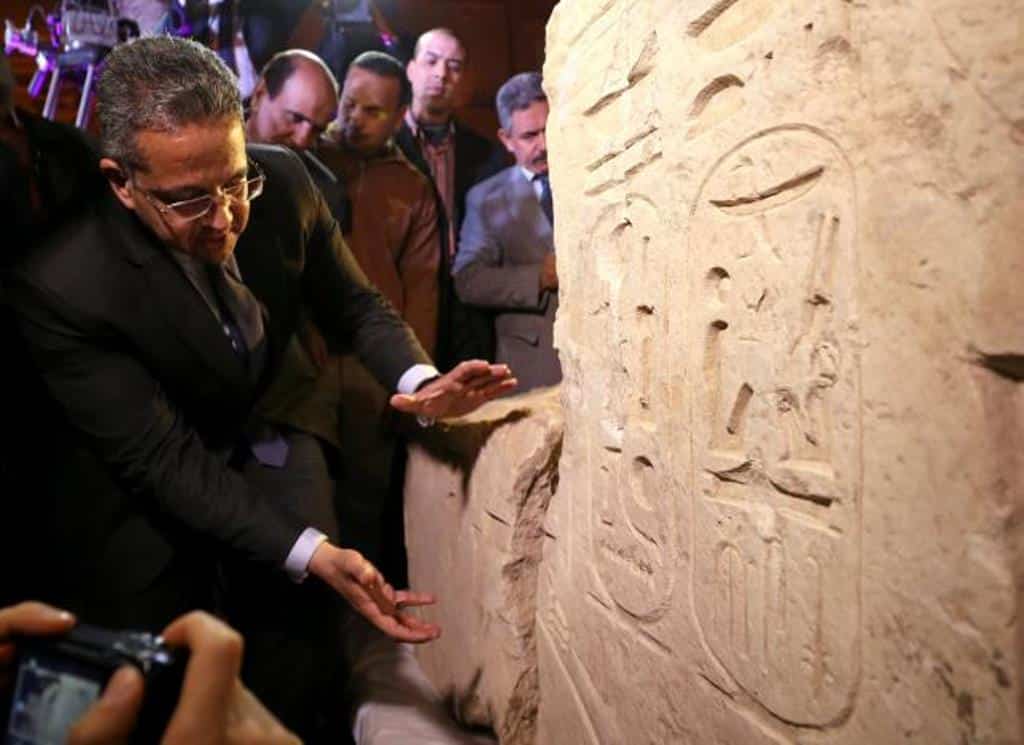 The Minister of Antiquities, Khaled El-Enany, told reporters about the condition of the tomb when it was first discovered and how although it wasn’t in good shape, archaeologists did an amazing job cleaning it up. He also said that there were 50 funerary cones, which are stamped pottery, indicating other tombs belonging to officials. 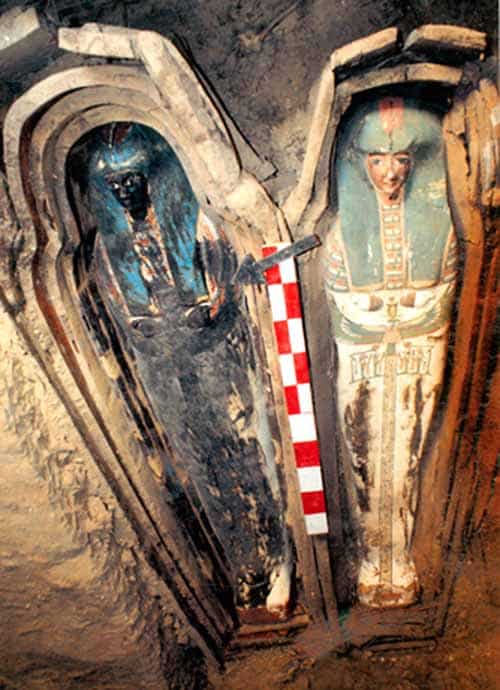 When archaeologists furthered their expedition of the tomb, they found other burial sites nearby. One of the sites had the remains of a woman around the age of 50, and her two children as well. When scientists looked at the remains closer, they determined she suffered from many diseases, including a bacterial bone infection. 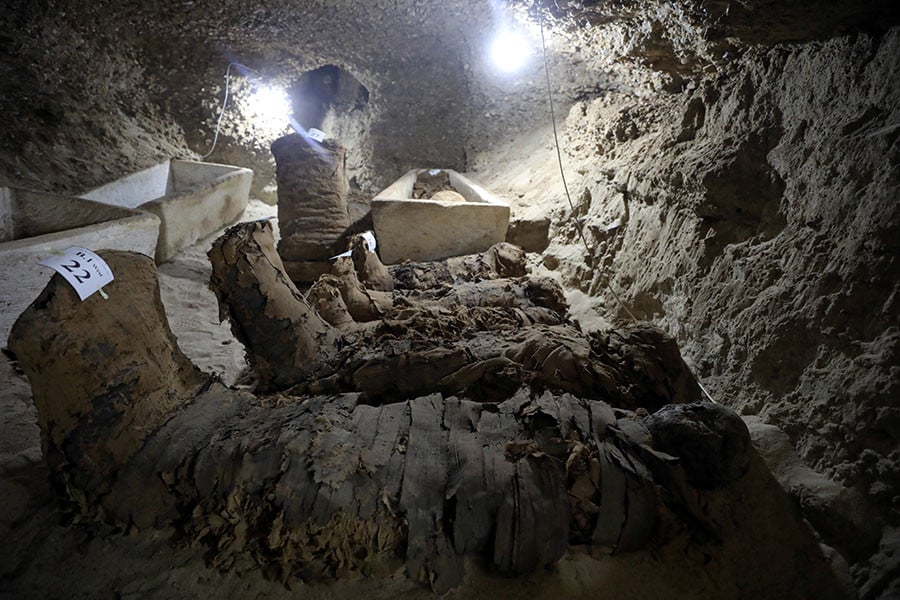 The nearby area is classified as a necropolis, which is an ancient cemetery where giant tombs are placed. In the same necropolis, they found another tomb consisting of multiple mummies as well. This tomb, however, had more than 1,000 funerary statues and everyone involved realized how spectacular the find was. El-Enany even told reporters that “This is exactly what Egypt needs”. 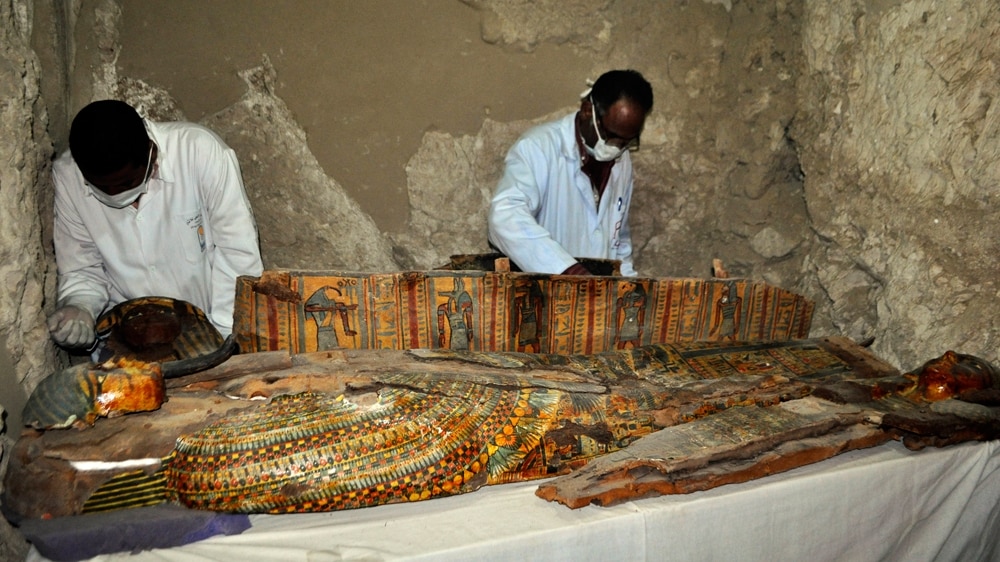 These recent discoveries are the largest Egypt have found this year and have boosted tourism enormously. The first part of the year saw the largest saturated influx, rising 170%, which equates to nearly $3.5 billion, according to the New York Times. In 2015 a Russian flight crashed in the Sinai Penninsula and killed all 224 people, which caused major damage to Russian tourism in Egypt as flights were banned. Needless to say, this is good news for Egypt. 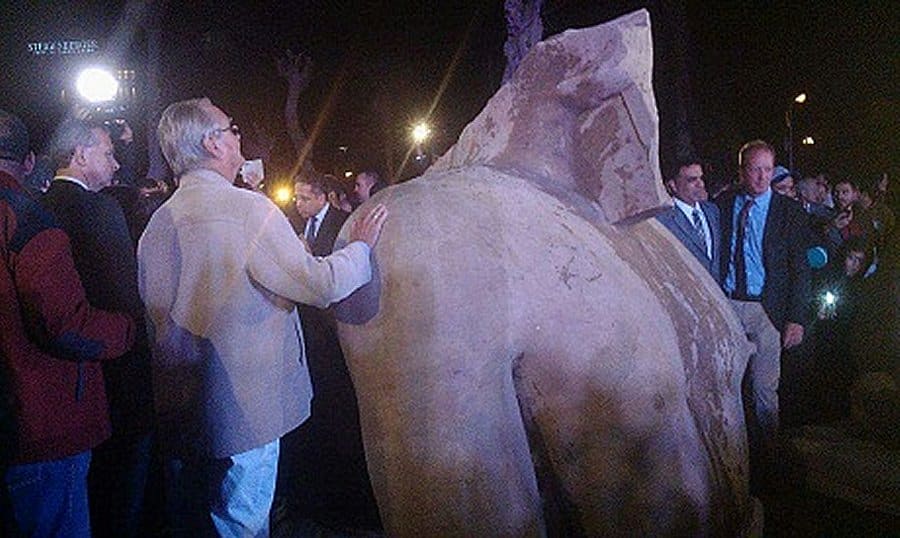 2017 has been a big year for Egypt regarding ancient discoveries. In March, while clearing a wasteland between popular apartment blocks in northern Cairo, an archaeologist team uncovered an ancient statue of a pharaoh. After examining the statue, it’s believed to be modeled after King Psammetich I and it’s massive, weighing in at over 7 tonnes. 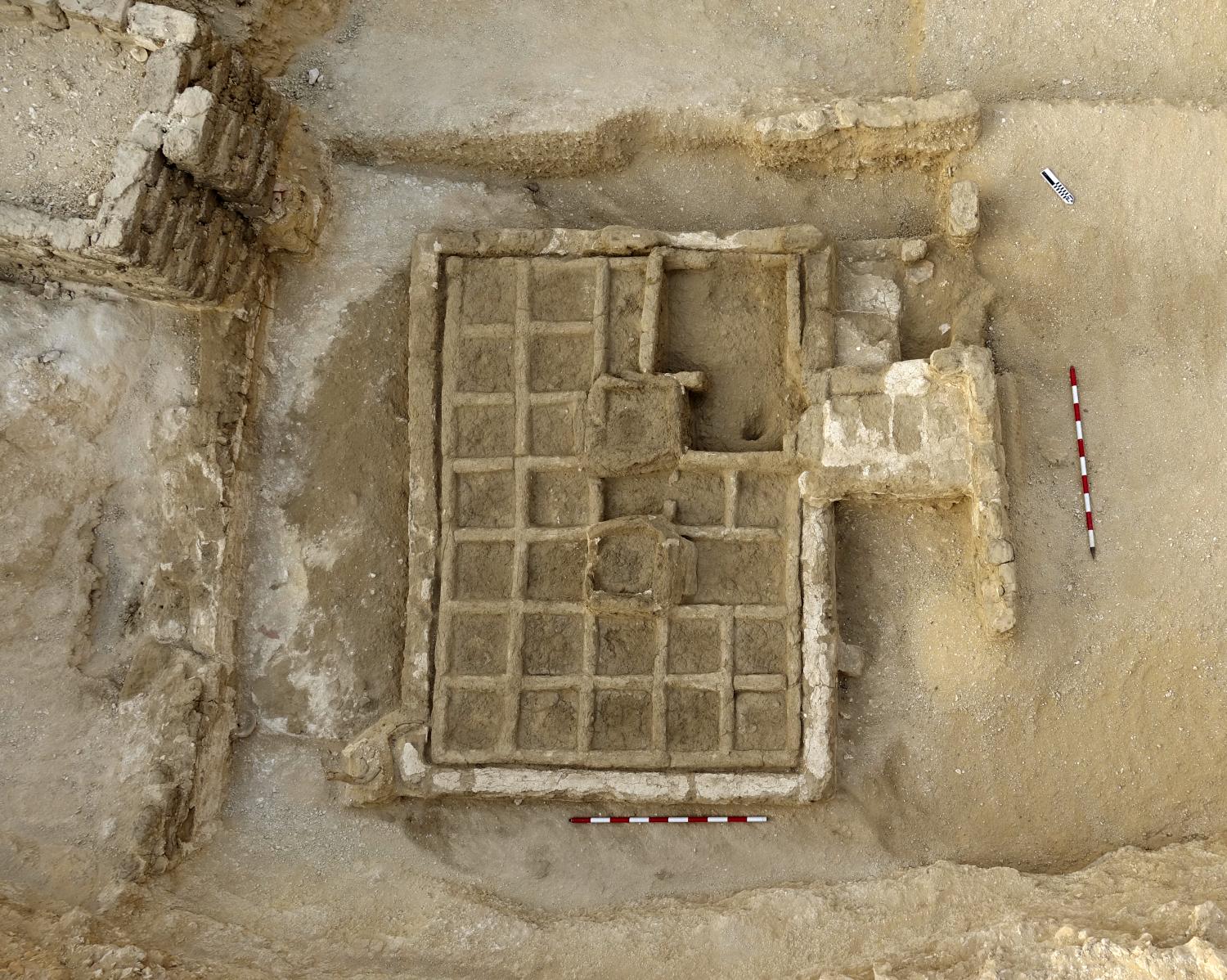 For many years, archaeologists have theorized that gardens were most likely placed at the entrance of tombs. They’ve developed this theory by illustrations left behind on tomb walls, depicting colorful entrances. Recently, a garden has been located on Dra Abu el-Naga hill in Luxor.

9. Just A Theory Until Now 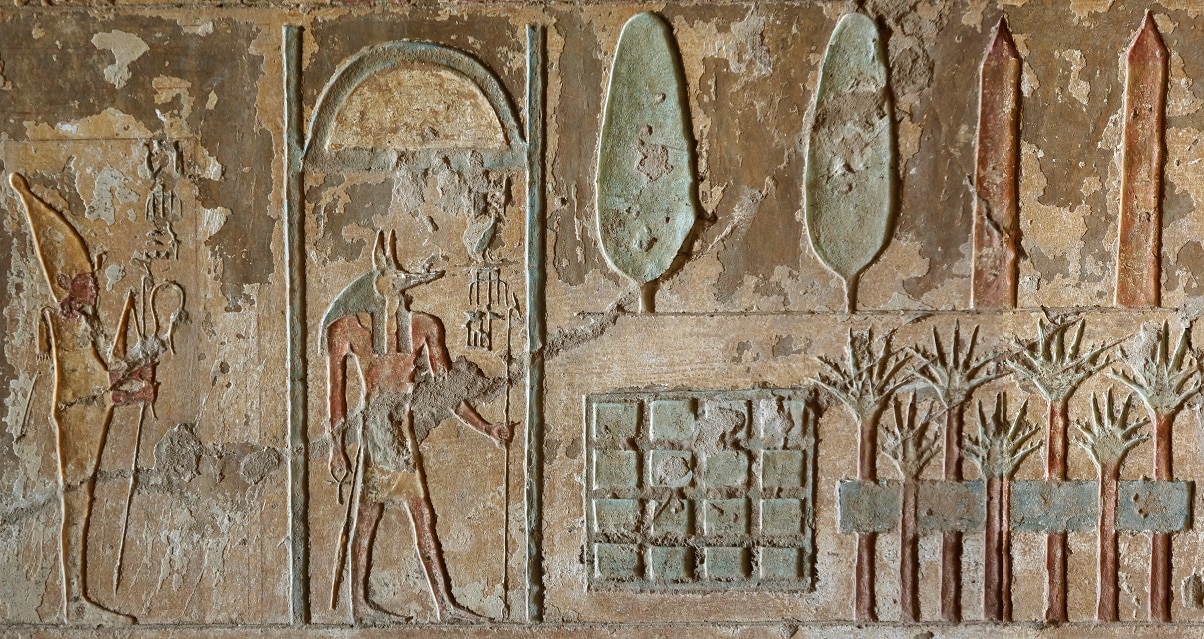 Until now, the gardens were just a theory, as none had been physically located. Dr Jose Manuel Galán noted the importance of the garden located in Luxor,“This is the first time that a physical garden has ever been found… A thorough analysis of the garden will provide valuable information about both the botany and the environmental conditions of ancient Thebes, of Luxor 4,000 years ago”. 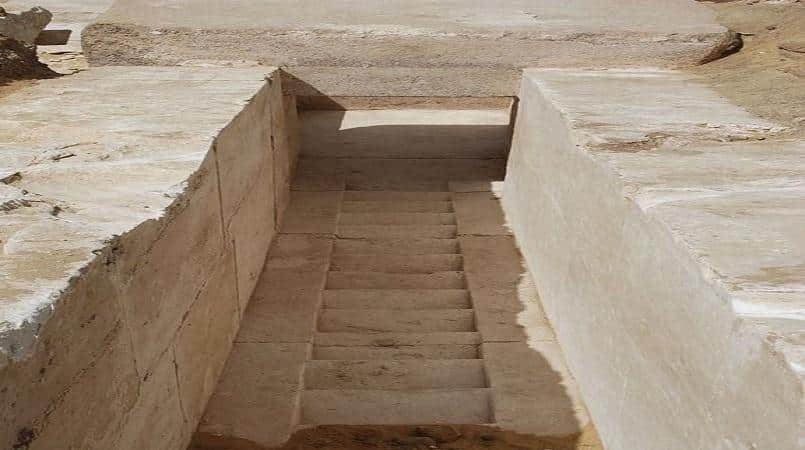 Earlier this year a pyramid from the middle kingdom era, around 4,600 years ago, was discovered in Giza. The pyramid was the first one to feature smooth sides and is 104 metres high. King Sneferu previously tried, but failed miserably, to create a grand pyramid but it turned out to be known as the bent pyramid due to calculation errors. 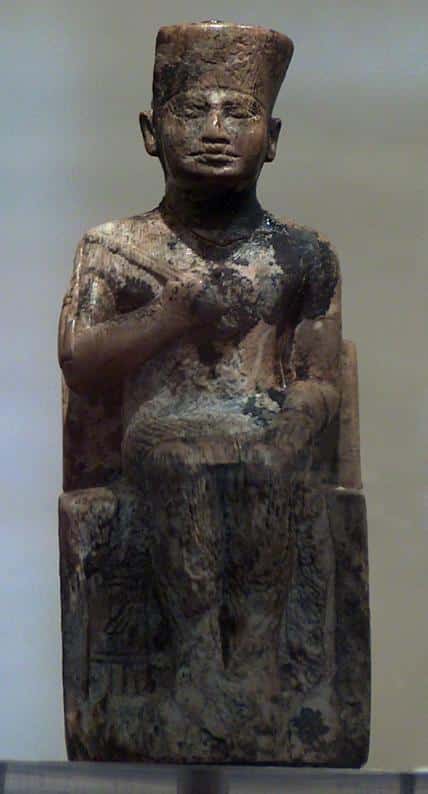 It’s important to note, that although King Sneferu is known for his bent pyramid, his son was Khufu, the man responsible for the Great Pyramid of Giza. Both men left a legacy known for unique pyramids.

South of the pyramid discovered in Giza, Dahshur, archaeologists discovered another pyramid from the middle kingdom era. They have yet to determine what the message inscribed on the front means, but they do know it belonged to King Ameni Ka Mauw. 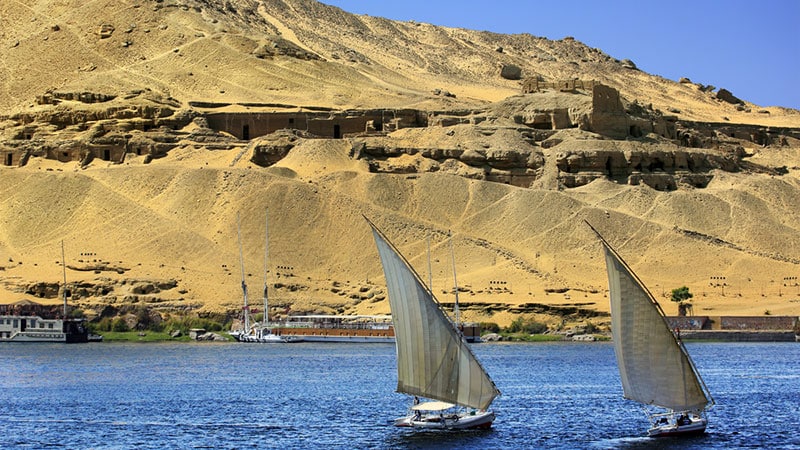 Another tomb found earlier this year, was completely intact when it was discovered in Aswan. The tomb is the final resting place for the brother of one of the most important governors from the 12th Dynasty, Sarenput II. The tomb consisted of pottery, cedar coffins, and wooden models displaying everyday scenes. 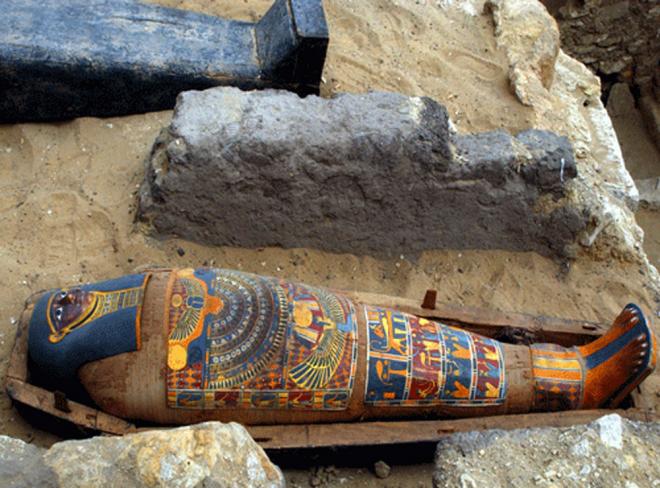 In April, there were eight mummies uncovered in a tomb in Luxor, near the Nile River. The tomb also had 10 extremely decorated coffins, that came in a variety of colors, including red, blue, black, yellow, and green. Another room still has yet to be fully excavated. 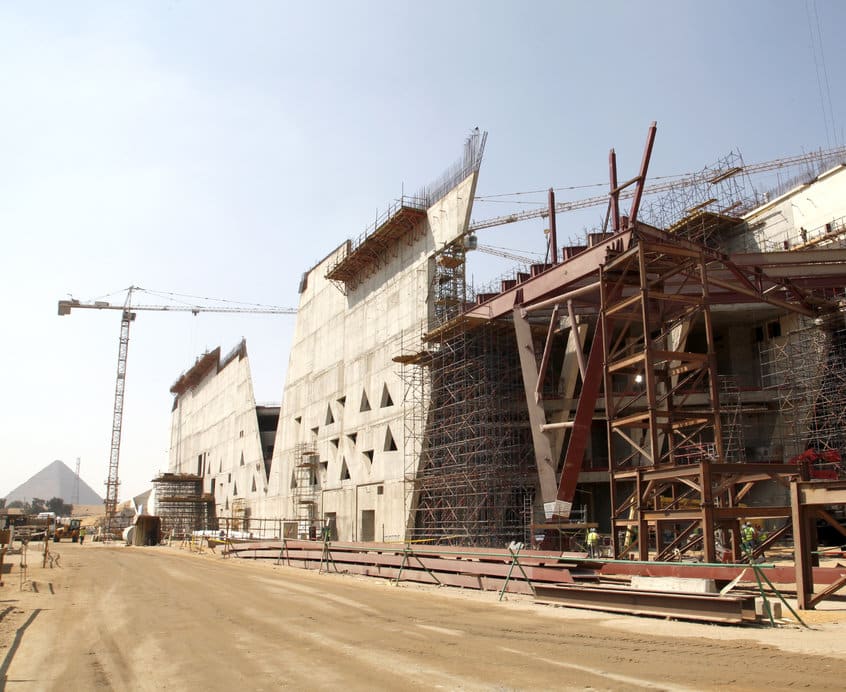 With all of the numerous artifacts found, it’s not surprising that Egypt is going to need more museums. One of Egypt’s main museums is located in Cairo, but it’s now busting at the brims. The museum has nearly 160,000 exhibits on display but has nearly 100,000 still left in storage…

The new museum is currently under construction and is set to partially open in May 2018. It will consist of over 480,000 square feet, giving it plenty of room for all the wonderful artifacts currently hidden. One of the most appealing parts of the museum is that visitors will be able to view the Great Pyramid of Giza through a glass wall.

1. The Museum In The Works 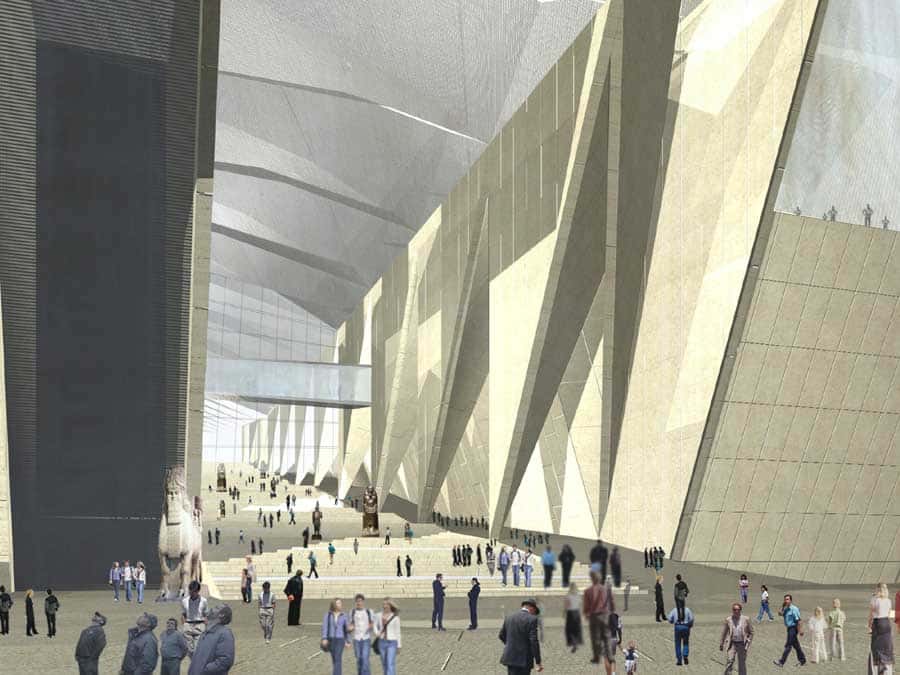 The new museum has actually been in the works since 2010 and was originally scheduled to be finished in 2012. Due to political turmoil, the project was paused and wasn’t put back in play until 2015. The final price tag will be around 1 billion dollars, and will soon be Egypt’s most sought attractions.