When Rescuers Rushed To This Septic Tank, They Couldn’t Believe What Was Trapped Inside

The Septic Tank of Strange 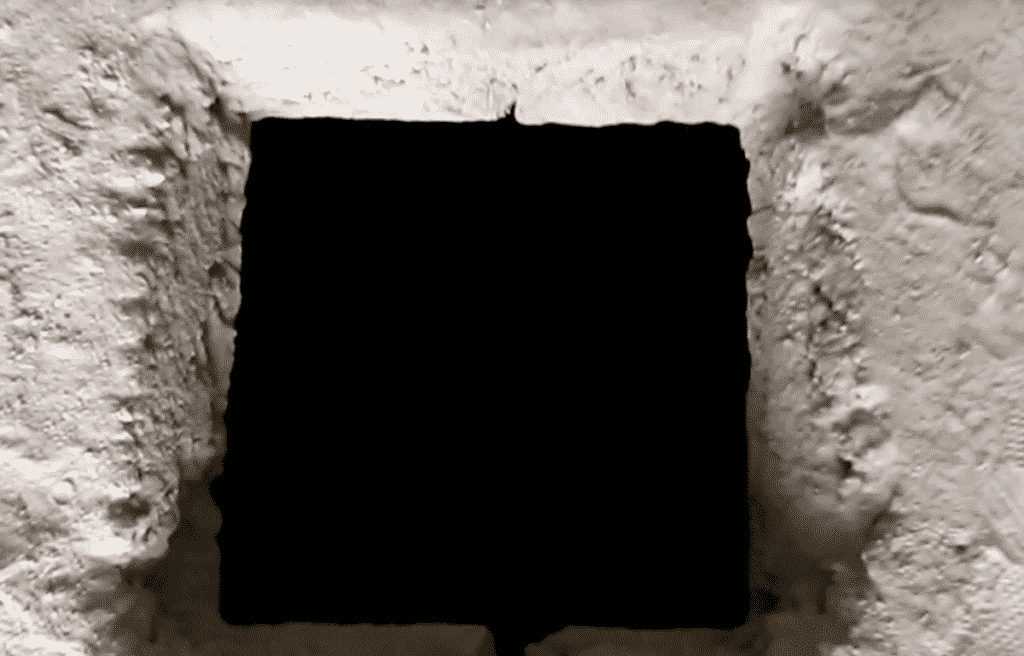 Imagine you’re a rescue worker and you receive a call about an animal trapped in a septic tank. For the volunteers at Animal Aid Unlimited, this was nothing out of the ordinary—However, when they saw what was trapped inside, they were absolutely shocked. How on earth could a creature so large find its way into a septic tank? 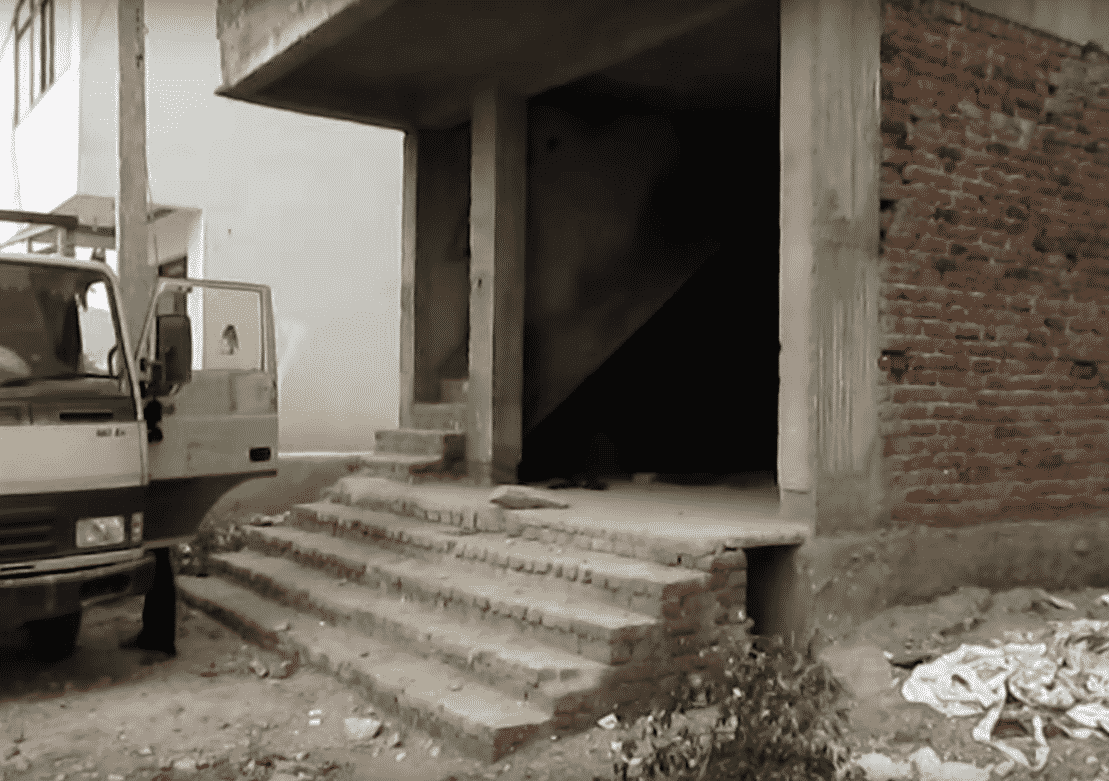 Located in India, Animal Aid Unlimited had seen its fair share of strange animal rescues. Dedicated to the welfare of ALL living creatures, their website says, “Our mission is to rescue and treat the unowned street animals of Udaipur who have become ill or injured, and through their rescue inspire a community to protect and defend the lives of all animals.”

What Could be Down There? 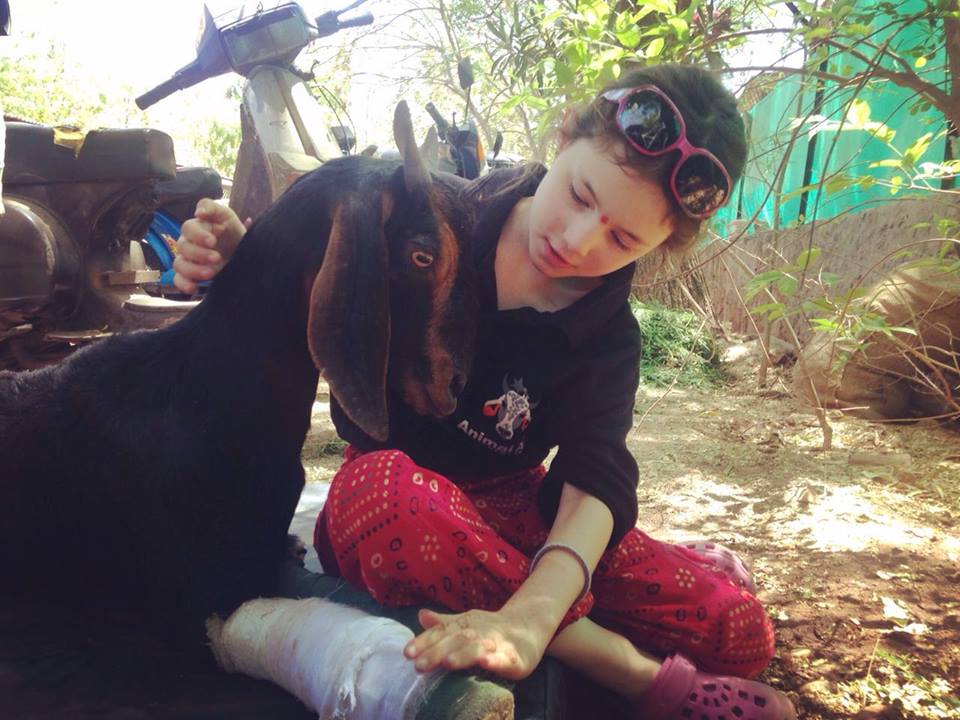 Despite the rescue group’s experience with rescuing animals from strange situations, this septic tank rescue even threw them for a loop. For one thing, the animal was extremely out of place. Second, how on earth did it get into the septic tank when the only entrance was a small hole in the concrete?

Team to the Rescue 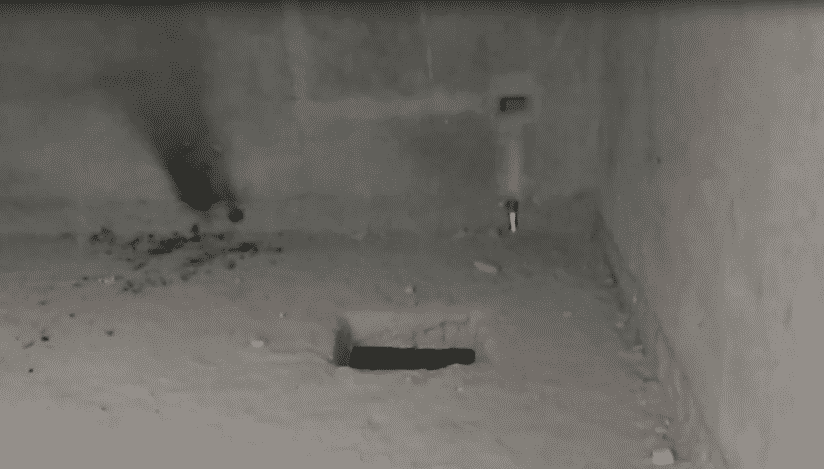 Nevertheless, the rescue team answered the call and arrived at the home. Marching down into the basement, they were surprised to see what was down in the hole. Wait until you find out what’s down there, you won’t believe it—we promise!

You’re Going to be Shocked! 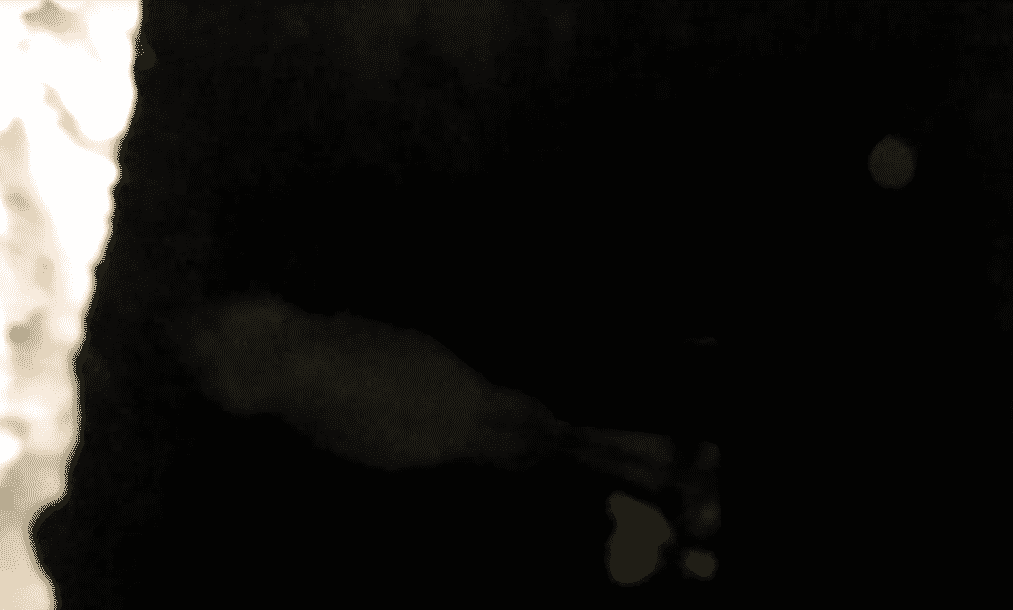 Underneath the basement of the home, was a ditch that held the septic tank, which is a small sewage system that disposes of waste. Peering into the darkness, the rescuers were taken aback by what they saw. Do you have a guess as to what it was?

Donkey in the Dark 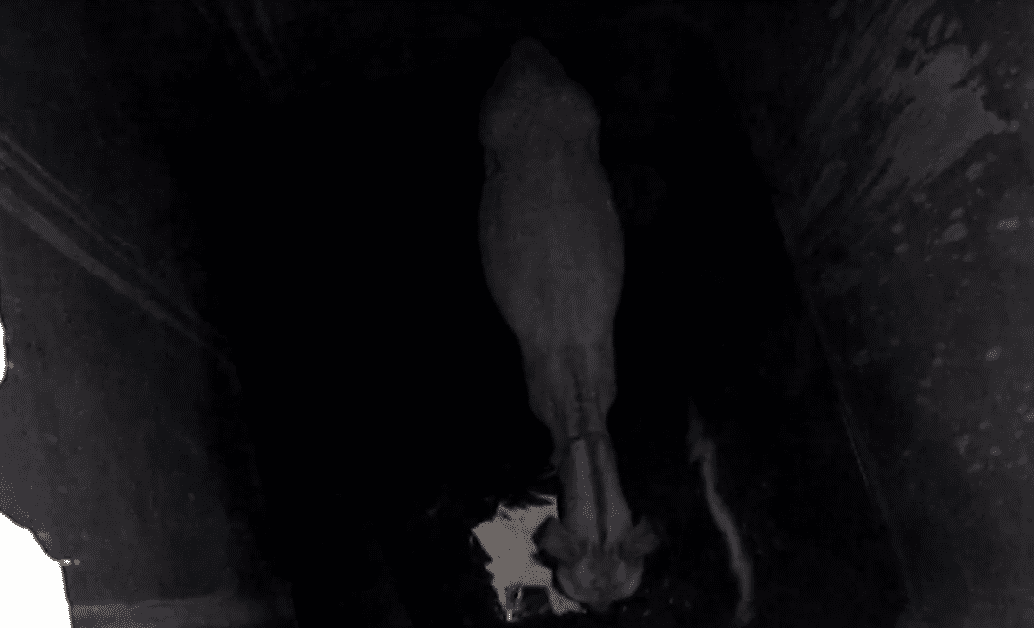 As the darkness gave way to light, the rescuers were shocked to find a donkey down in the septic tank. According to the rescue team, they had no idea how the animal could have squeezed through the small opening of the septic tank, which was no bigger than a computer screen.

Terrified, the donkey was standing in chest-deep water. According to the rescuers, the water was filthy and freezing. They assumed the donkey must have been in a fight and accidentally slipped into the hole. Although, how he fit through it was still a mystery.

Too Small of an Opening 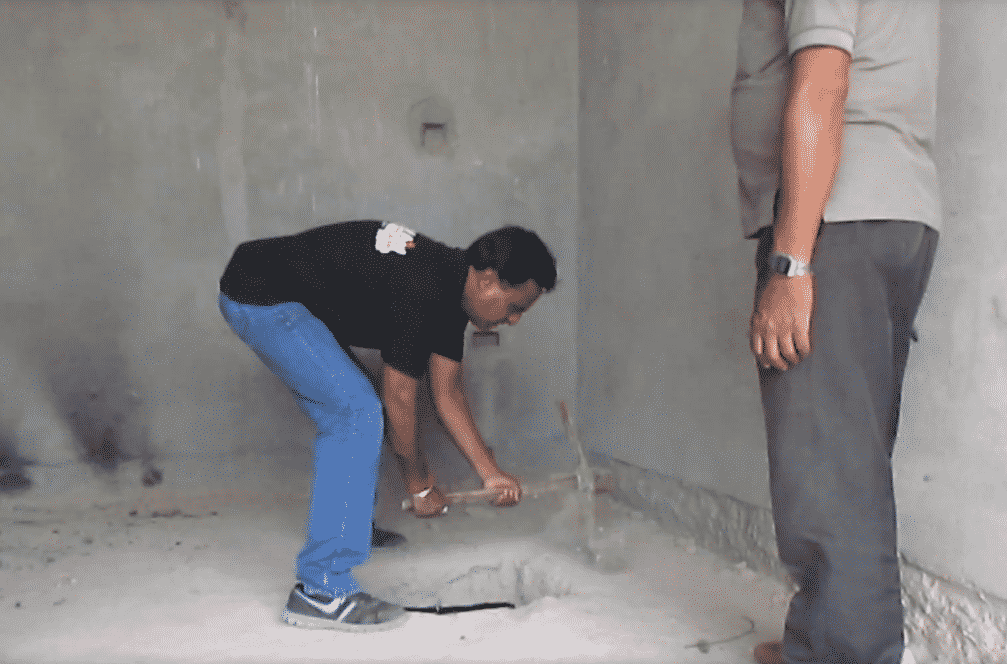 One of the big problems facing the rescue team was that the hole was too small to fit him safely back through. They would have to widen the opening, but unfortunately, all efforts with a pickaxe weren’t fruitful. Thankfully, the rescuers refused to give up and leave the distressed animal. 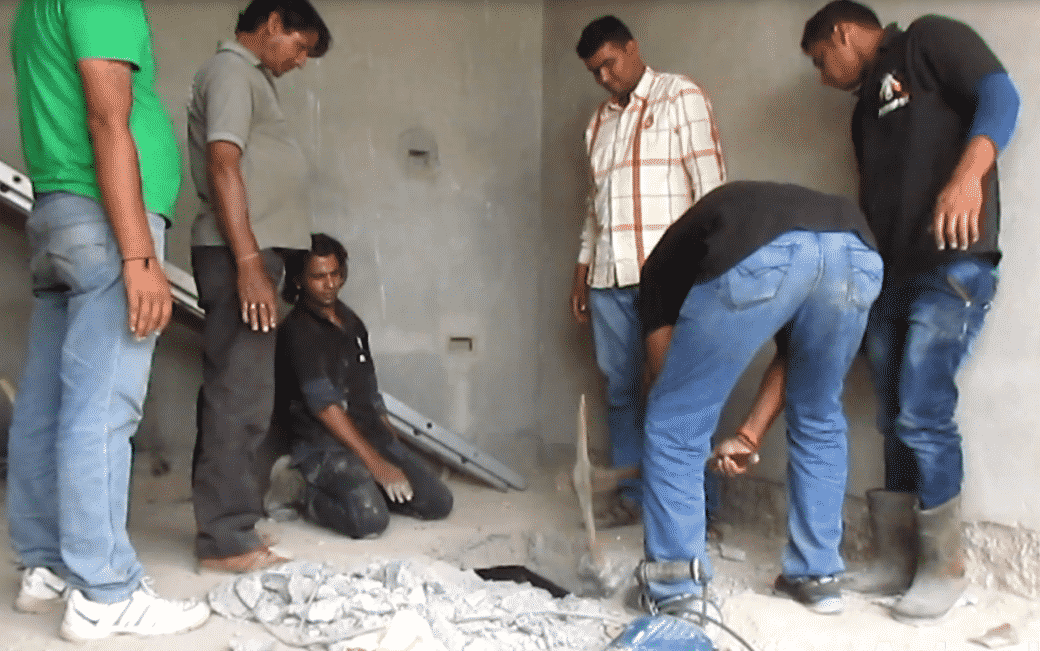 Based on their calculations, the rescuers believed the donkey had been trapped for over 24 hours. Not wanting to drown, the poor animal had to stay standing so it wouldn’t sink beneath the disgusting putrid water of the tank. 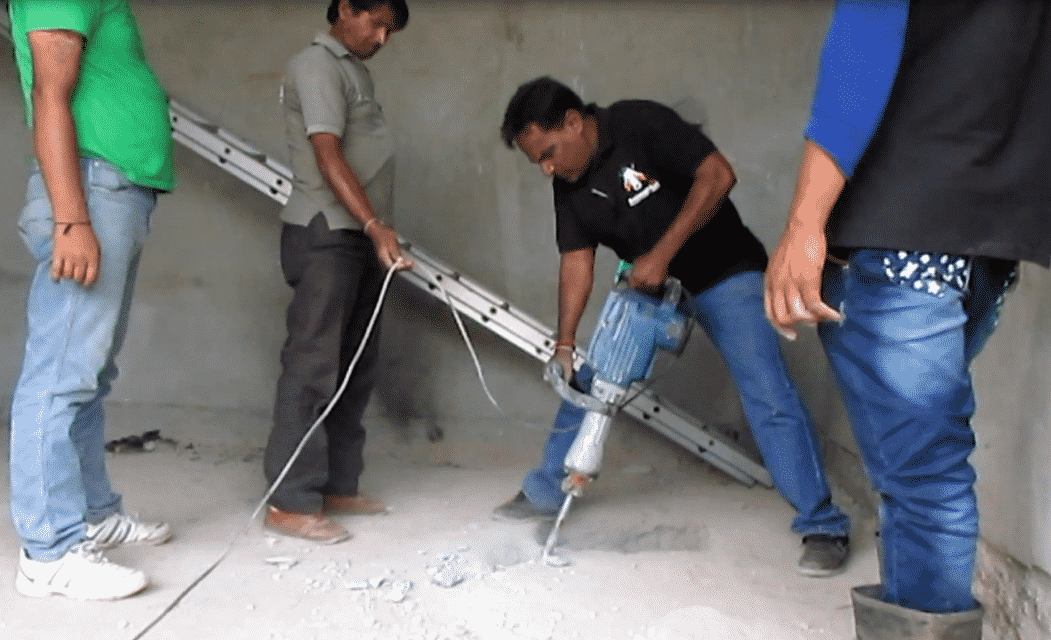 Another worry was dehydration. According to the team, the donkey had been drinking the dirty water in the tank. “We cannot fathom the fear and despair he must have felt being unable to cry for help and thinking that he was never going to get out,” the rescuers revealed.

Time for a Powerful Tool 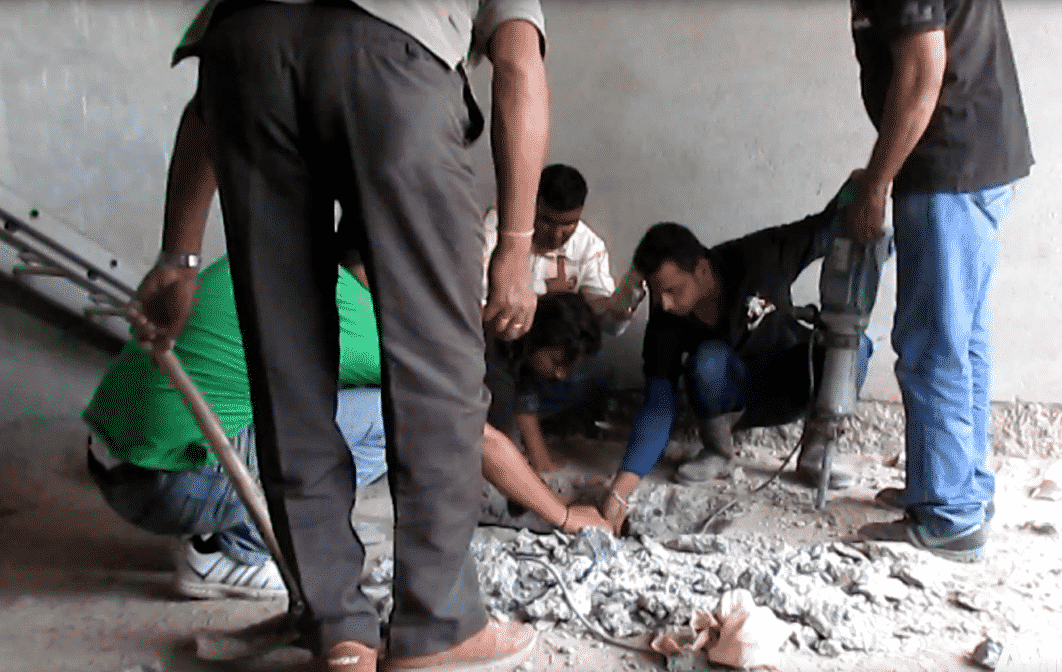 With the pickaxe no longer an option, it was time to bring in the heavy artillery. A jackhammer was brought in to try to widen the hole, but no one from the animal rescue knew how to use it. This wouldn’t deter them though—the scared donkey motivated them to press on.

Working as a Team 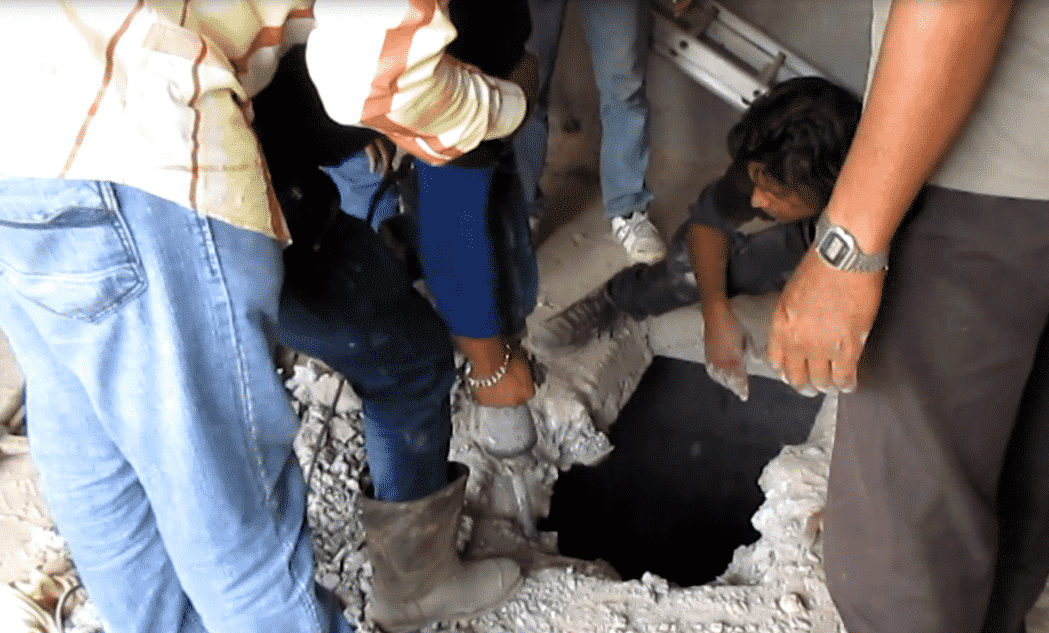 According to the account of the incident, the actual jackhammer operator wasn’t available on such short notice. Therefore, the team had to attempt to use it themselves. While the machinery was quite difficult to operate, they pressed on for the sake of the poor donkey that was waiting on them below. 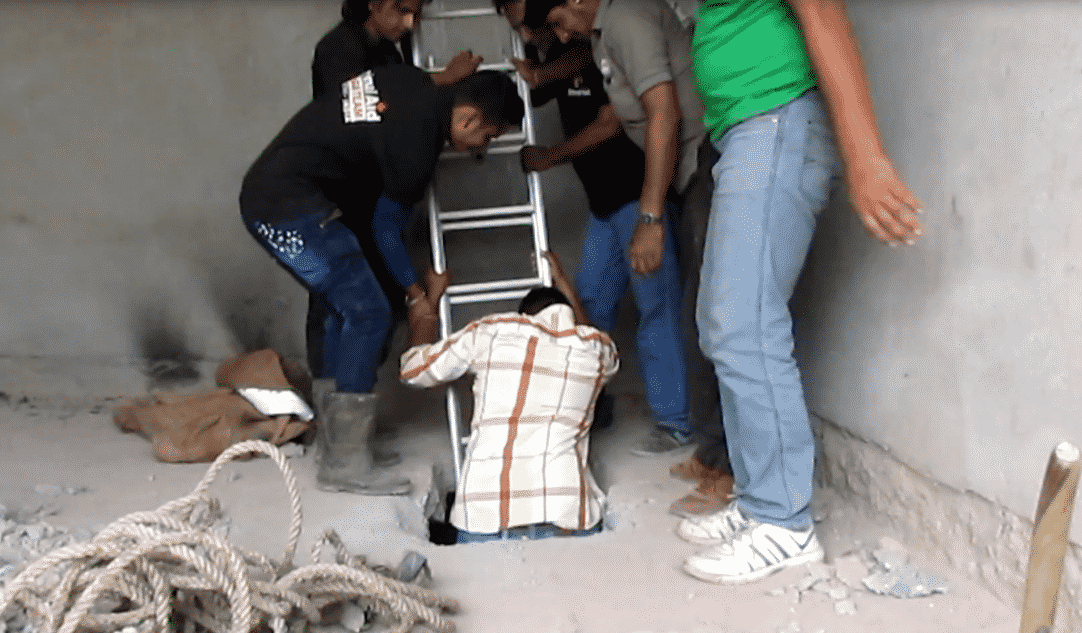 You would think, with such a powerful tool, widening the hole would have been a breeze. Unfortunately, due to the thickness of the concrete, the process took hours.  Thankfully, their efforts were not in vain and they were able to widen the hole enough to where they could help the animal. Would they be able to get the poor creature out in time? 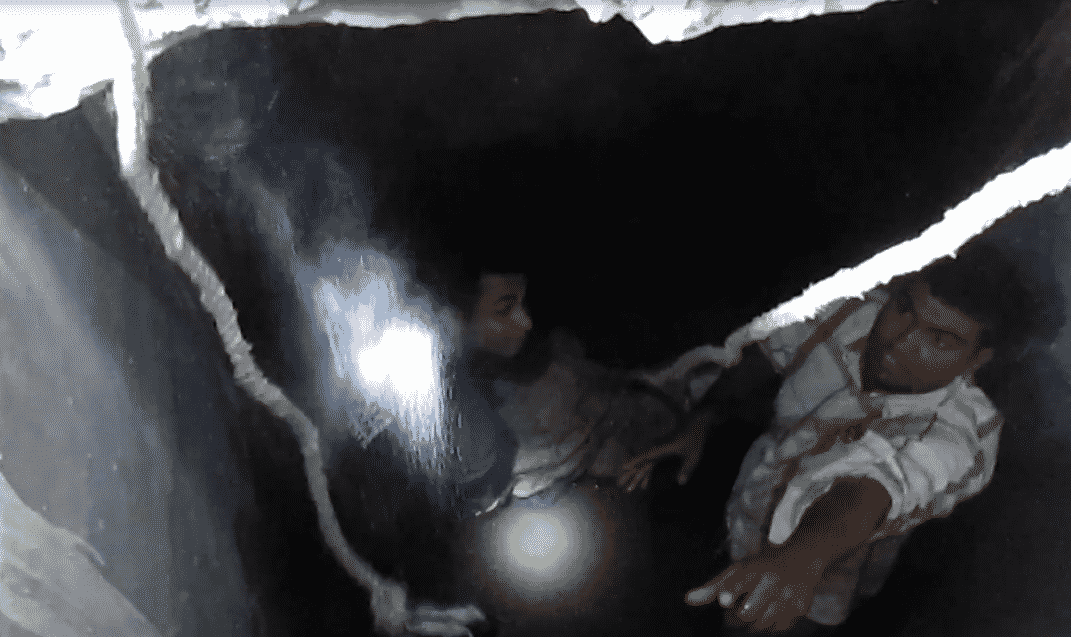 The first task to be done was to get the donkey warm. Two rescue volunteers descended into the dark and dirty water to wrap blankets around the shivering, wet donkey. Next, they would have to devise a way to lift the poor animal out of the hole. However, such a task was easier said than done. 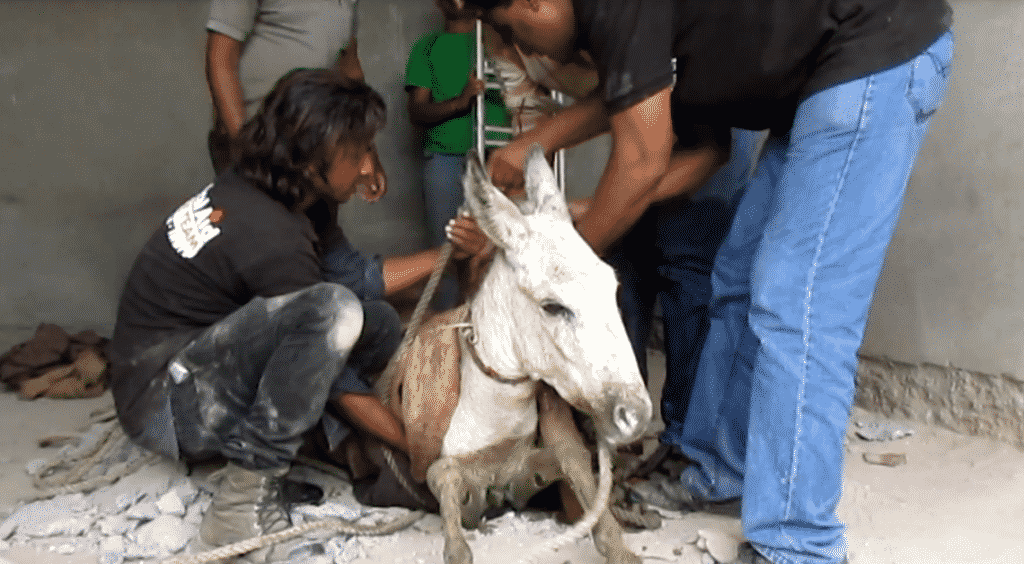 The group decided that utilizing ropes would be their best option. They dropped them down into the hole and secured them around the animal. They then hoisted the poor donkey into the air and successfully lifted him out of the septic tank. 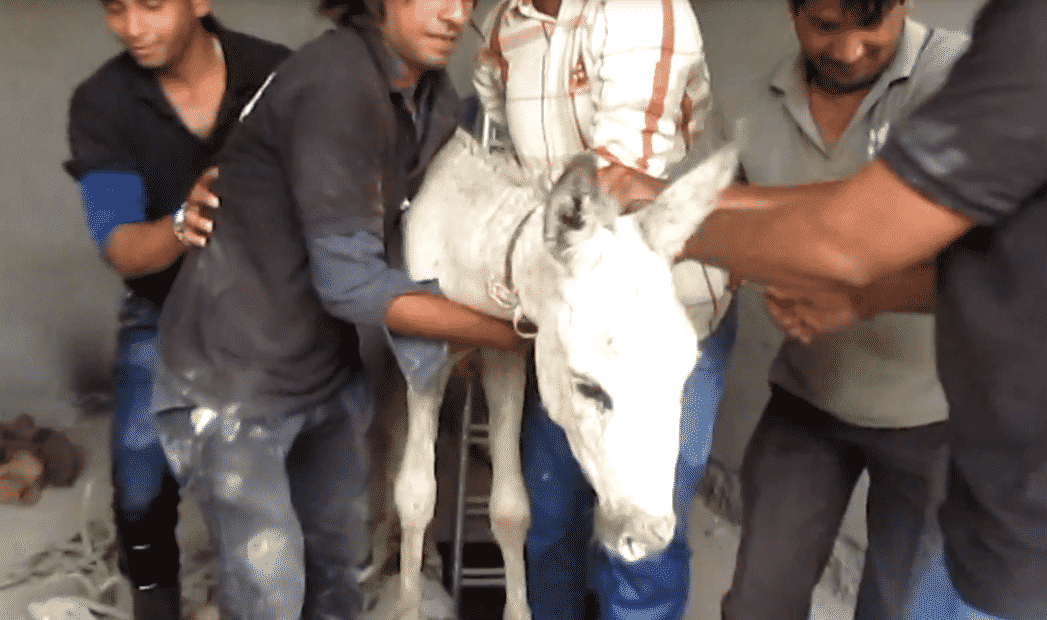 Finally released from his septic tank prison, the donkey was examined for injuries. Although he was exhausted and stressed, he wasn’t harmed and seemed quite happy to be out of such a predicament. 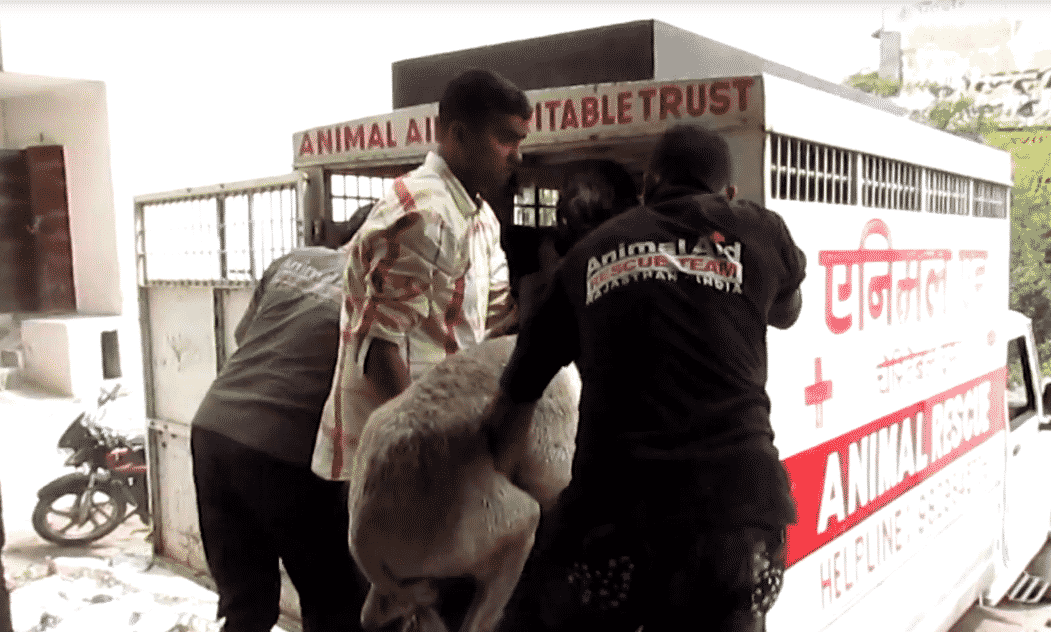 The rescue group immediately provided relief to the exhausted animal, carrying him to the ambulance that had arrived to pick him up. The poor thing had been standing for 24 hours after all; therefore, he was given the 5-star treatment as he was transported back to the rescue group’s headquarters. 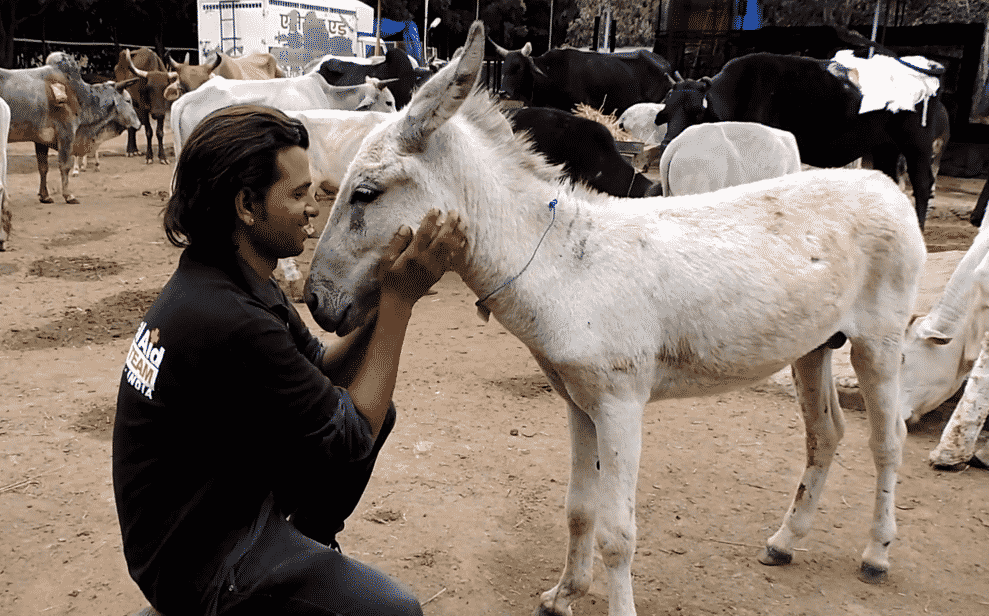 Back at the rescue’s animal sanctuary, it didn’t take long for the donkey to begin to recuperate. Thanks to a lot of love and attention from the staff, he immediately began to perk up. He rolled around, ate a big meal and even enjoyed tons of cuddles from his rescuers. Not a bad ending to a dark beginning, we have to say. 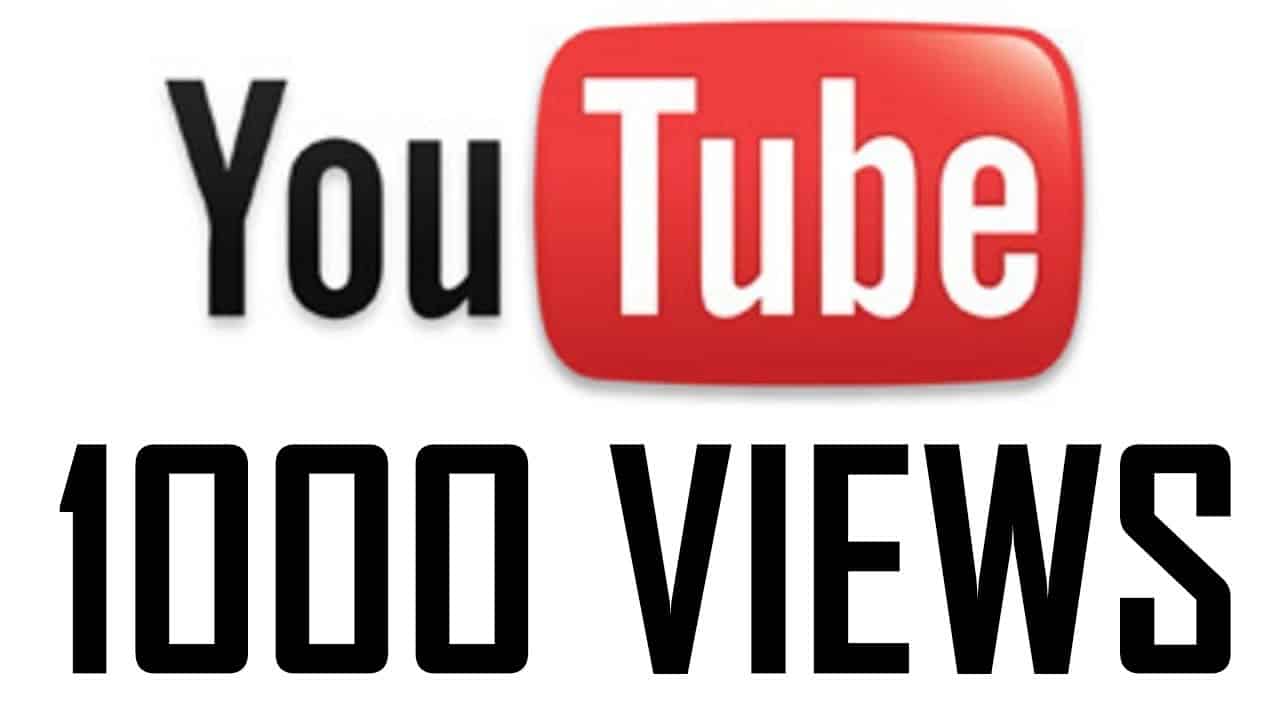 The rescue group decided to share the video of their daring attempt to save the donkey on social media. To say it was a hit would be an understatement. It seems people love watching animal rescues!

Commitment to Animals in Need 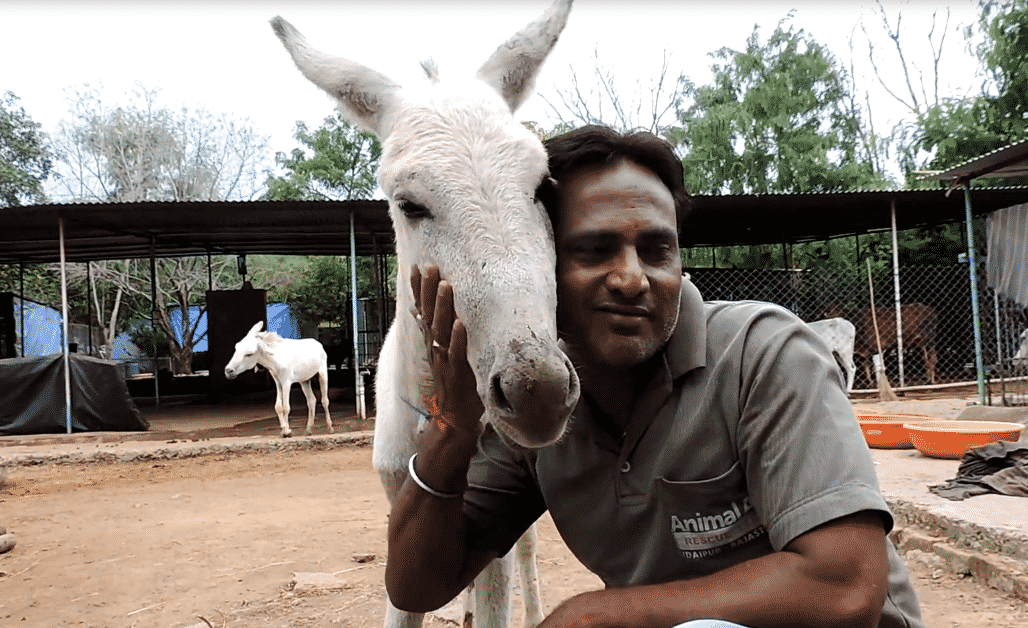 The video has been viewed thousands of times, and people have showered the rescue with praise and positive comments. However, this rescue is just one of Animal Aid Unlimited’s efforts. They continue to fight the good fight and save animals in need on the streets of India. We commend them for their wonderful work!