A Country at War 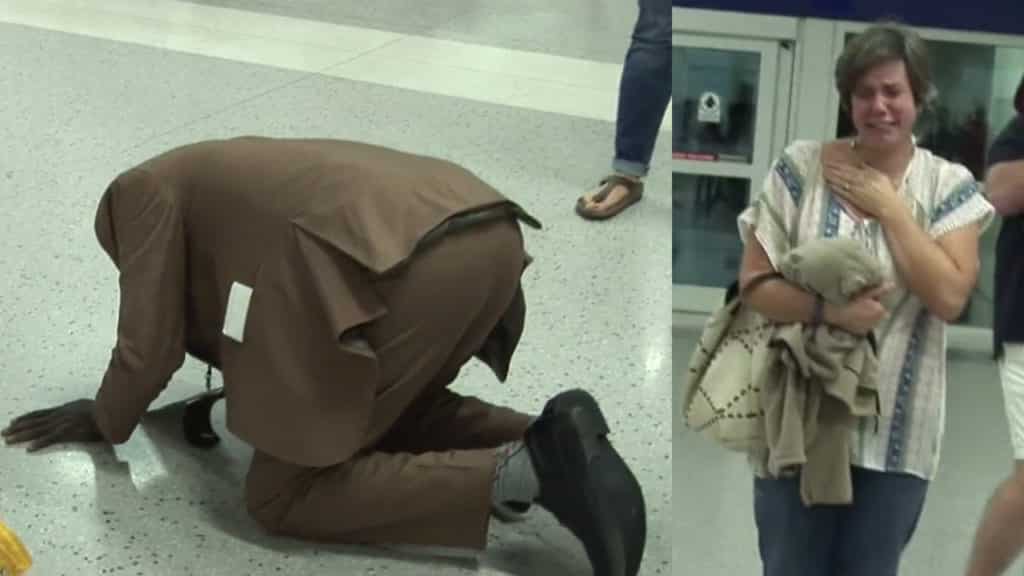 Over the past few decades, the country of Sudan has been at war. Plagued by turmoil and bloodshed, South Sudan was finally able to break away from the rest of country in 2011—but, unfortunately, it’s been embroiled in a civil war since 2013. Despite the trials and tribulations, one woman named Alik made the brave decision to flee from it all, beginning a journey that would take her across the world into the unknown. 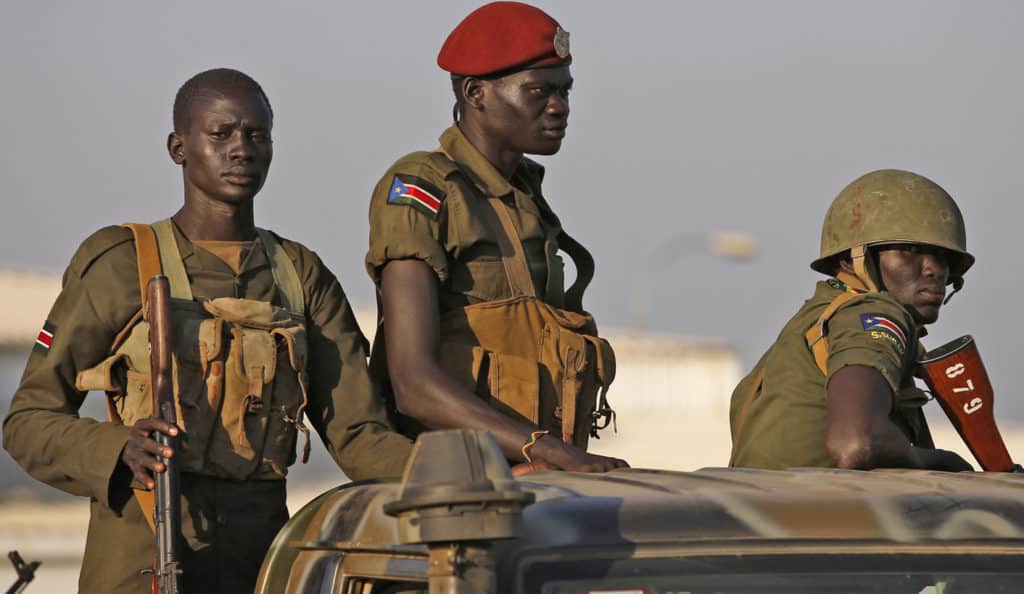 Venturing from South Sudan with nothing to her name, Alik’s journey would take her to Fort Worth, Texas, a place completely unknown to her. Her situation was made even more complicated due to the fact she had her two children with her and was pregnant with another child. Separated from her husband Dyan, Alik had no idea if she or her children would ever see him again.

The Case of the Vanishing Marriage Papers 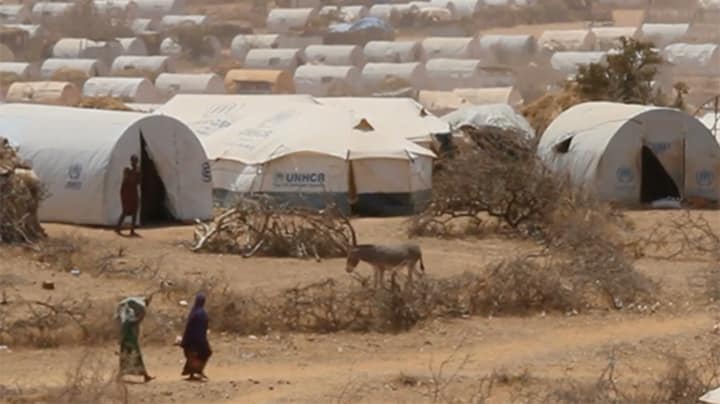 So what happened? Well, in the years leading up to Alik’s ordeal, the marriage papers for her and Dyan had been lost. When the resettlement program documented the couple, Alik was designated as a single mother, while Dyan was labeled a single man. While Alik was moved to the front of the line in terms of resettlement, her husband wasn’t considered a top priority.

Scared in a Strange Land 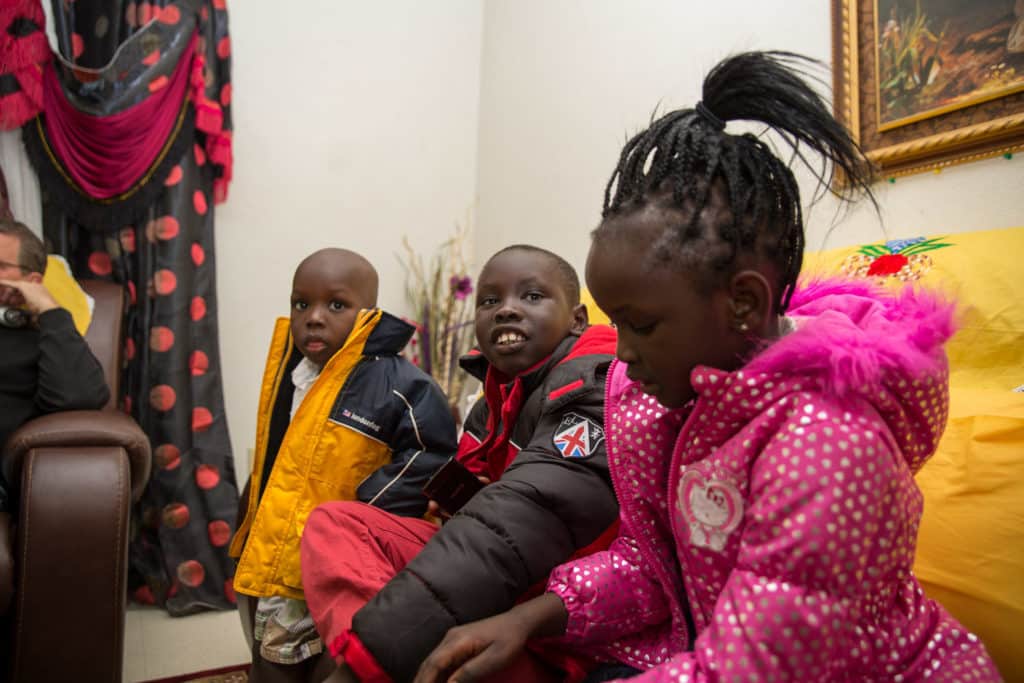 Terrified and alone, Alik arrived in Fort Worth uncertain of her future. With the war in Sudan raging on, going back was not an option; therefore, she would have to make the best of her current situation. Thankfully, two kind women, Molly and Mary who worked with the refugee resettlement organization Catholic Charities were there to be the support Alik needed in her time of need. 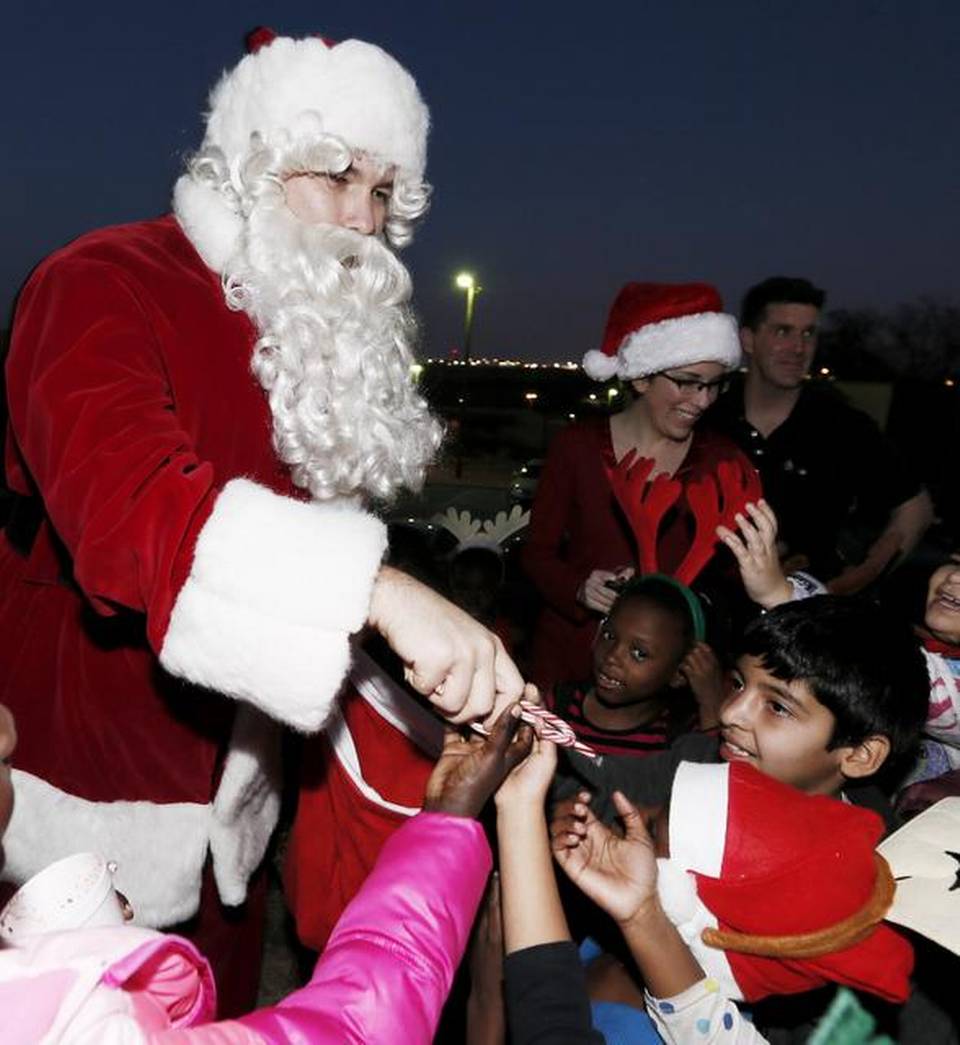 Molly and Mary worked hard to make Alik’s transition into American culture and easy one. They threw the mother-to-be a baby shower and were even at her bedside when she gave birth to her third child. Working with the local church, the women helped purchase Christmas presents for Alik’s children and helped them transition into their new way of life. 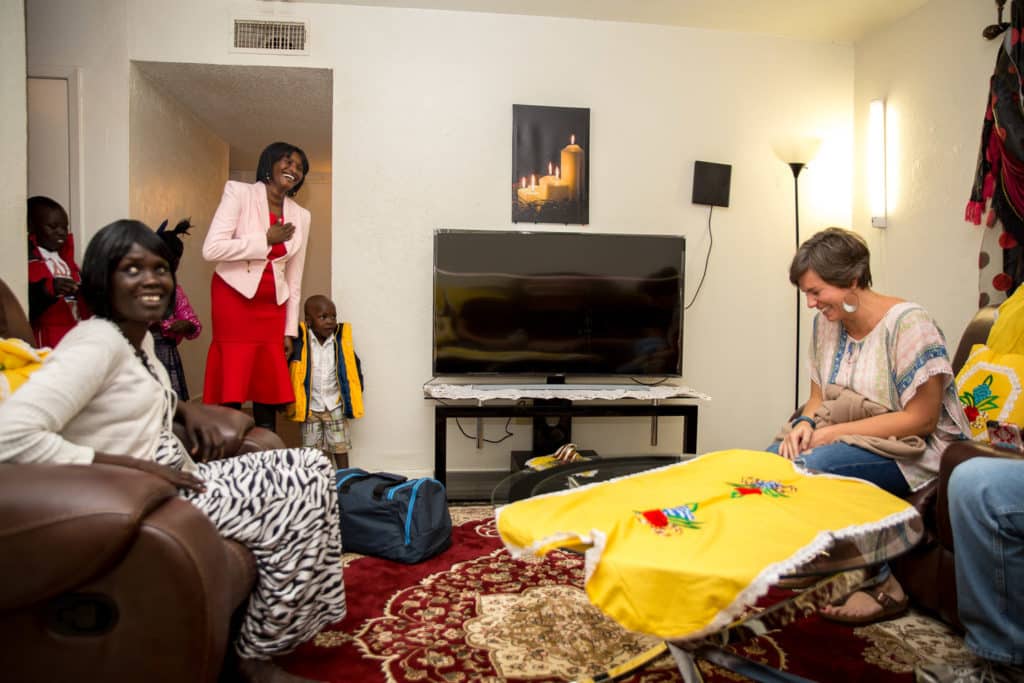 As Alik settled into her new life, she met other refugees from Ethiopia, Chad, and Liberia. There were also mothers from Nepal, Russia, and Burma. Together, they all formed a home group through their local church and began to plan monthly gatherings to eat and fellowship. 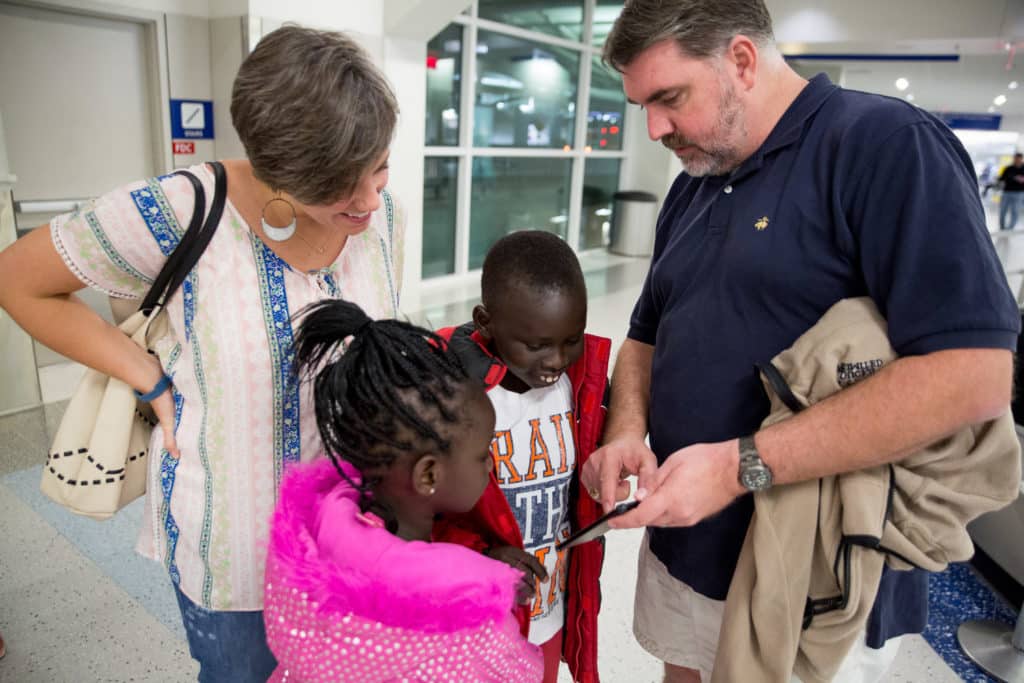 Molly and Mary found their experience with Alik to be inspirational, as well as moving. They would visit her and the kids at their apartment regularly and extended their kindness to the other refugees as well. They knew the best thing they could offer was companionship and reassurance. 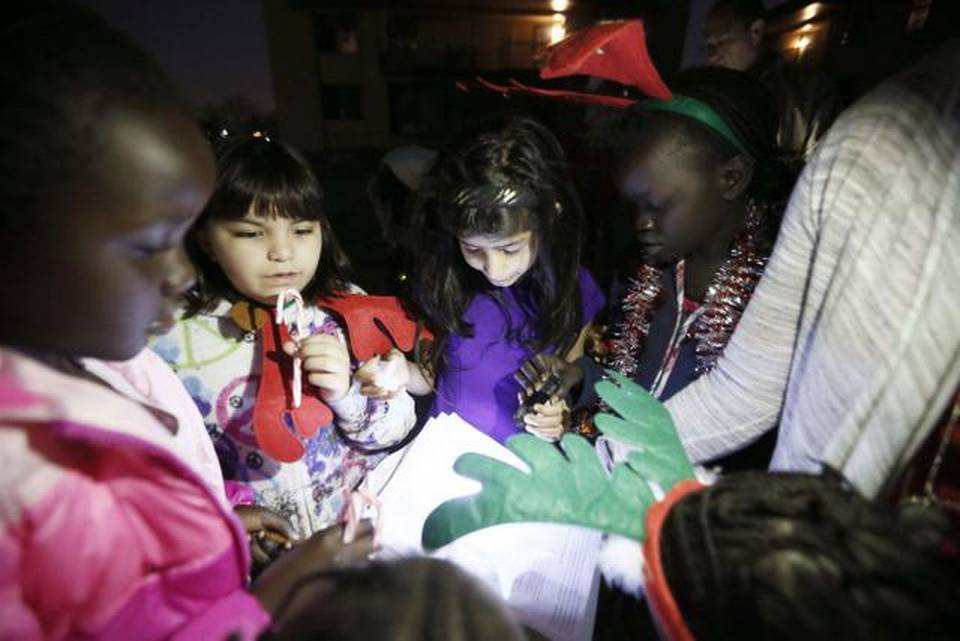 The cookouts at the complex became a fun tradition for Alik and her fellow refugees. Molly and Mary decided to get their church involved and extend the kindness beyond cookouts. In fact, they had Christmas present drives, summer camps, and even Thanksgiving food donations! 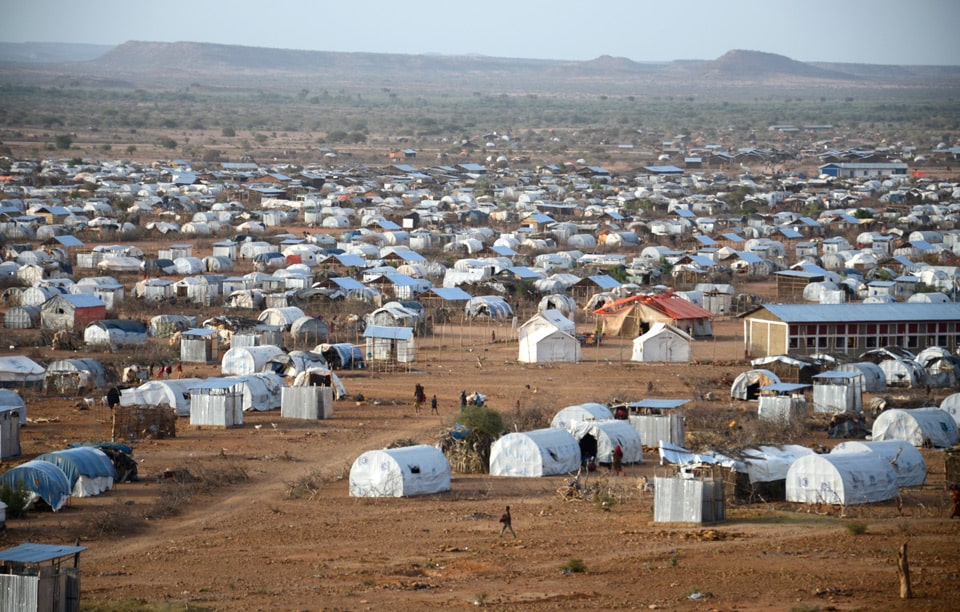 During this time, Alik’s husband was also trying to find a way back to his family. Stranded at a refugee camp in Egypt, he received very depressing news. According to his caseworker, he wasn’t selected for resettlement because of his status as a single man-things would’ve been different had he been married. She also informed him that he most likely would never be reunited with his family. 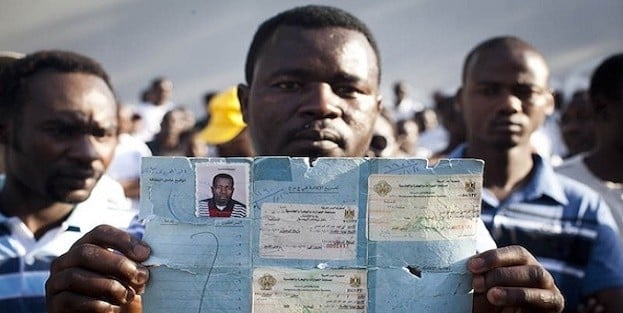 Over the next four years, Dyan would find himself separated from all he knew and loved. He had never met his son, who was now a toddler and his other two children had grown up to the point where he wouldn’t even recognize them. Would he ever see his family again?

Attempting to Bring Him Home 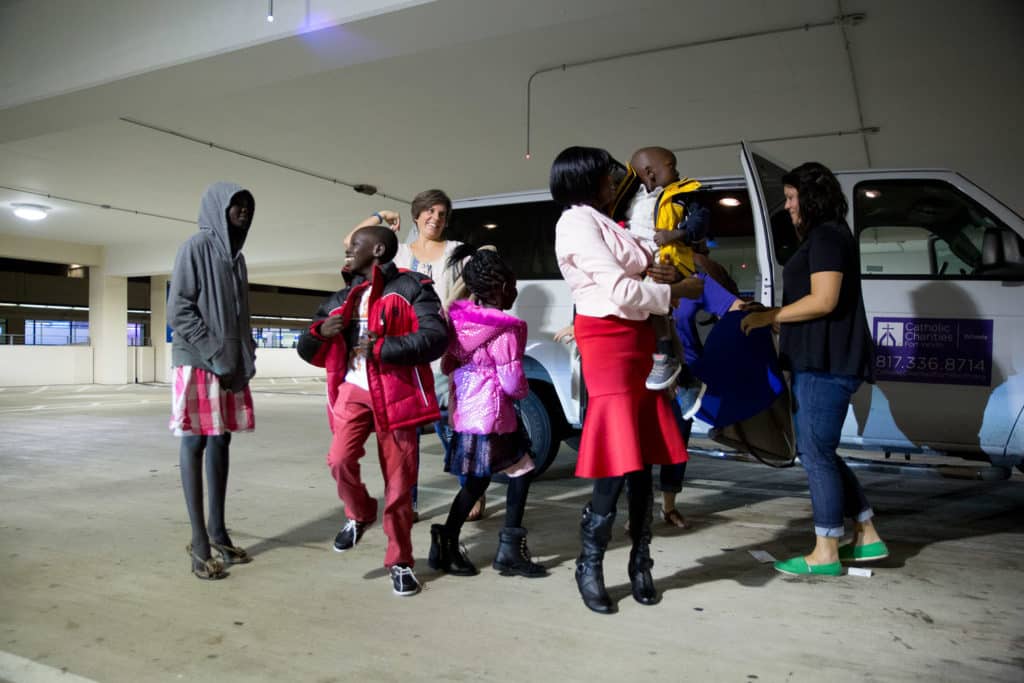 Aware of the situation with Alik and Dyan, both Molly and Mary tried everything they could to reunite the couple. They held meetings with social workers and even contacted their local immigration officials and politicians. Unfortunately, no matter what they tried they always received the same answer: it would be a miracle if Dyan ever saw his family again. 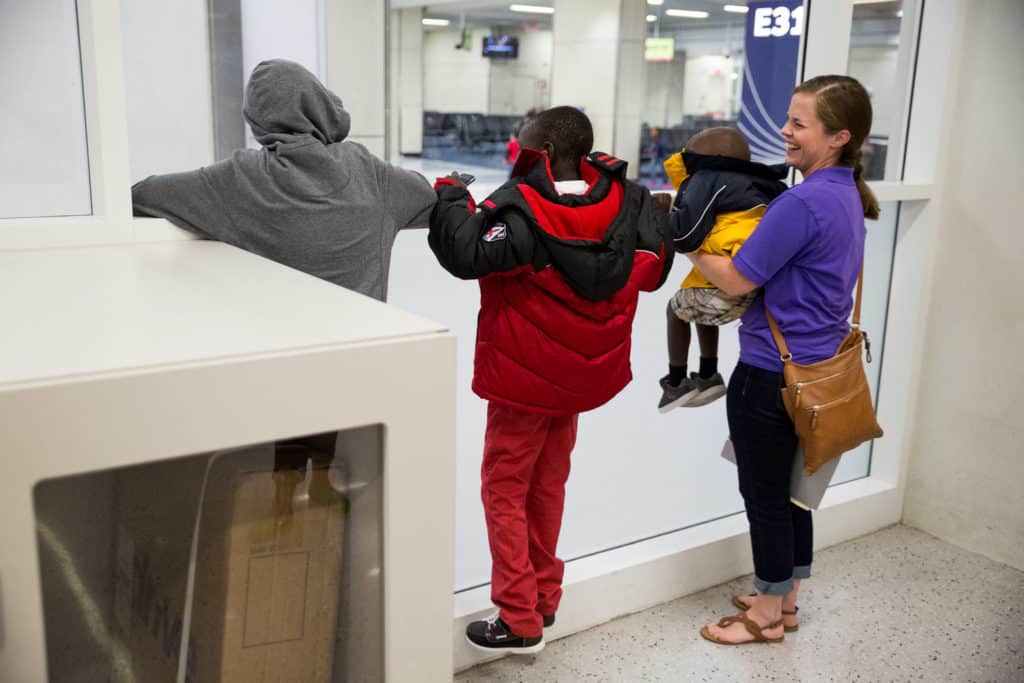 However, sometimes miracles DO happen! On one normal evening, Molly and Mary picked up Alik and her children for what they thought would be church—hHowever, the ladies had another plan in mind and it involved driving to the airport. Why? Well, Alik would finally be reunited with her husband after four long years. 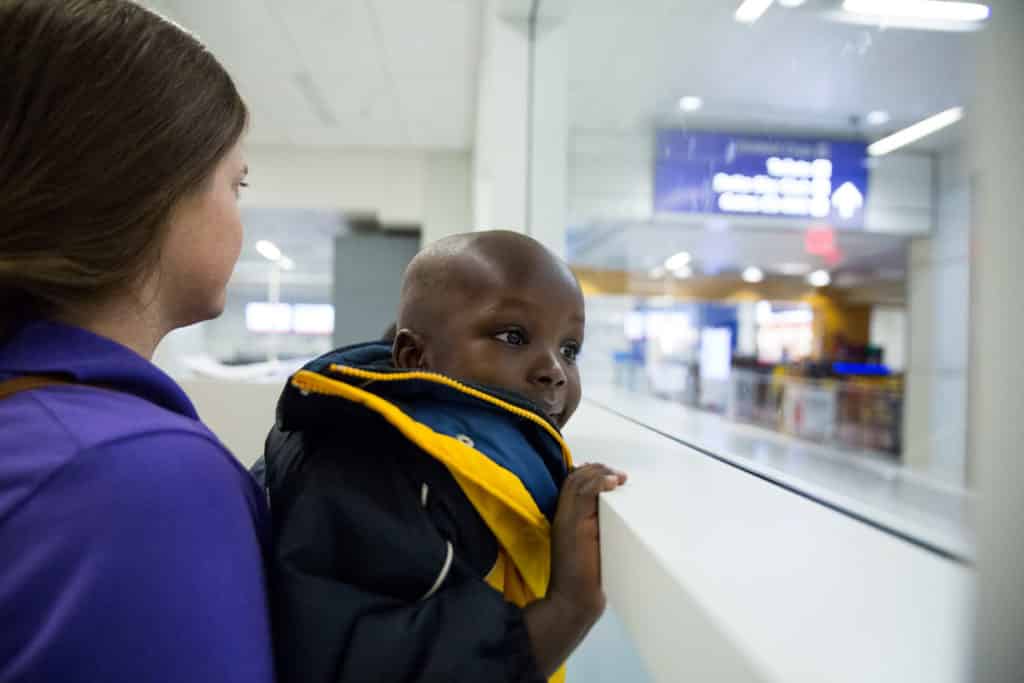 Alik was beyond consolable when she realized where they were going. After arriving at the airport, the children made homemade signs for their father and walked to the terminal where he would arrive. Beyond excited, they would now have wait 35 minutes until his flight arrived. 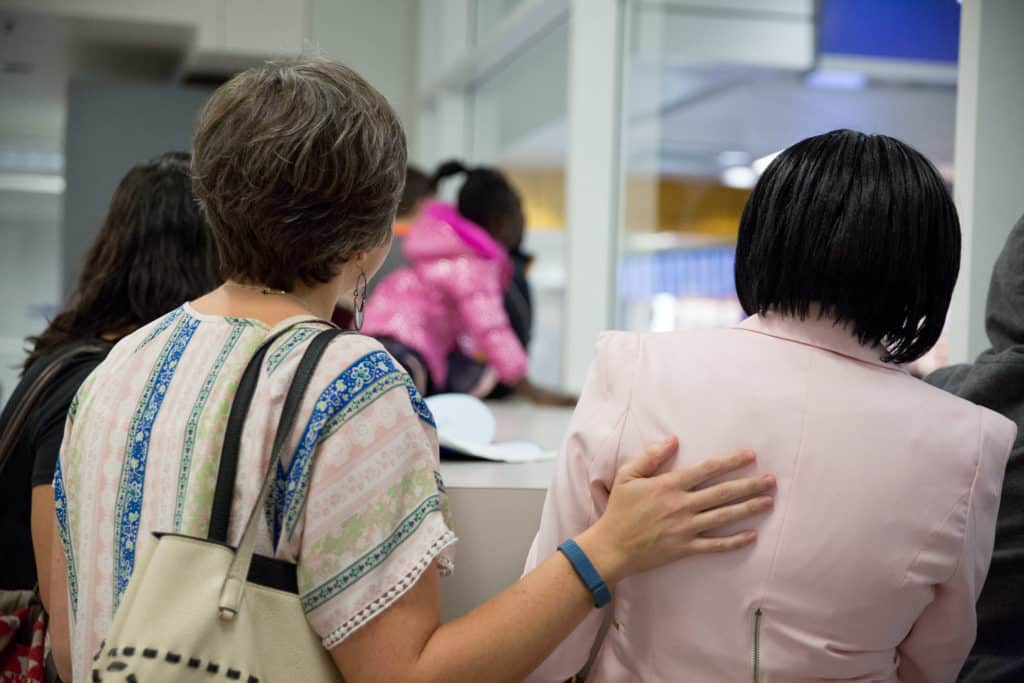 After a wait that seemed like an eternity, Dyan’s plane finally landed. As the passengers began to appear in the terminal, Alik began to grow nervous. Where was her husband? Could it be possible he missed his connecting flight in Houston? Thankfully, their fears were for nothing and Dyan appeared, tapping on the glass between them. The reunion, four years in the making, was finally taking place.

Dad and Sons Together 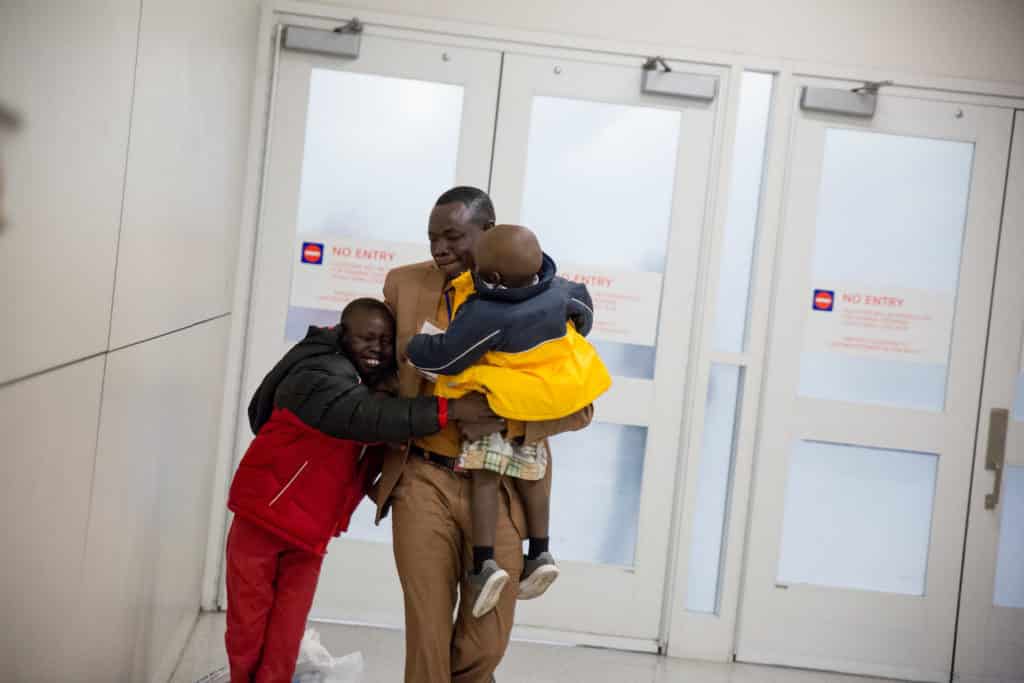 Rushing past the security officer, both of Dyan’s sons embraced their father. Even his three-year-old that he had never met ran towards him. After hugging his children, Dyan finally made the walk to his wife.

A Roller Coast of Emotion 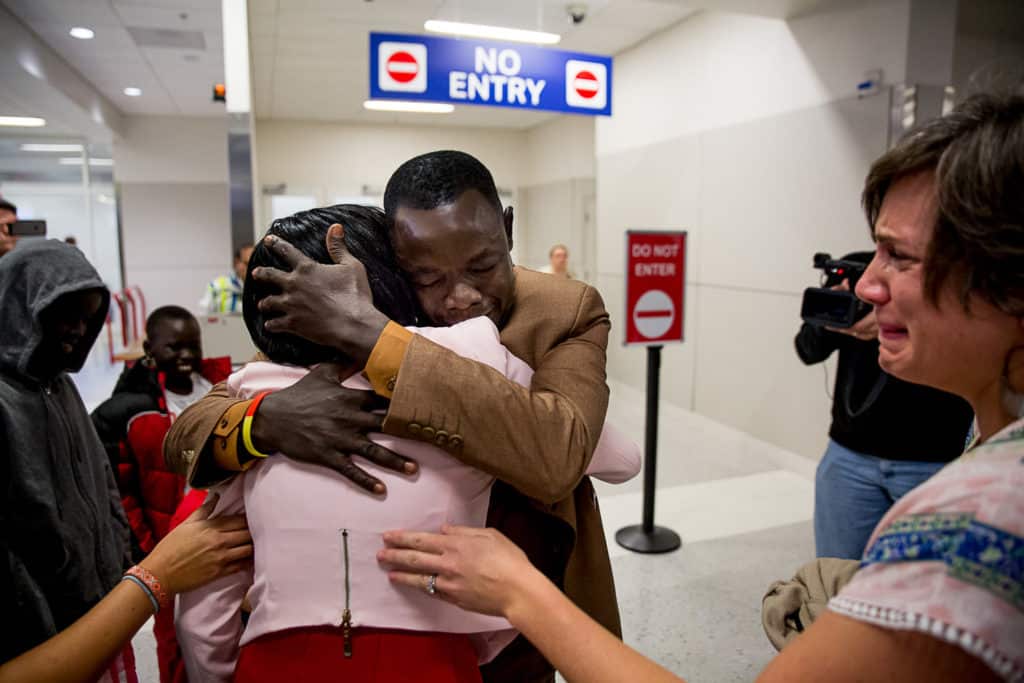 According to Dyan, the moment was an emotional roller coaster. At times he didn’t even know how to react. After reconnecting with his wife, he got to meet Molly and Mary, as well as the other volunteers who made the reunion possible. The reunion was a lot of love, tears, and hugs. Despite the long journey, he was finally where he belonged.

Falling to His Knees 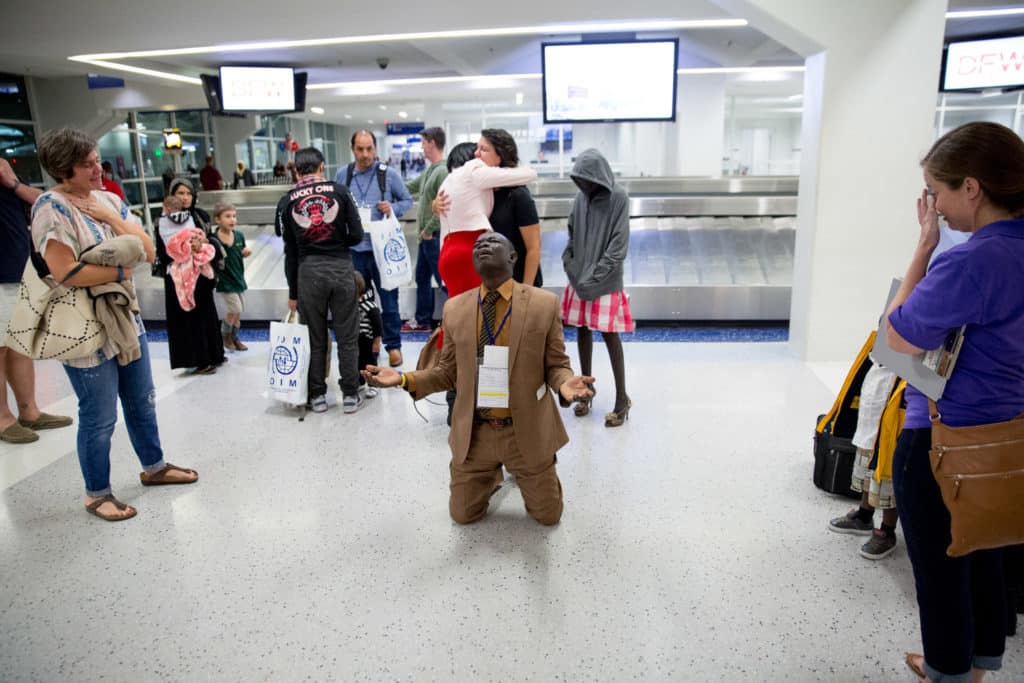 Overcome with emotion, Dyan fell to his knees and praised God for reuniting him with his family. Tears in his eyes and hands in the air, he had never felt so much relief and joy all at once.

Where Did the Bags Go? 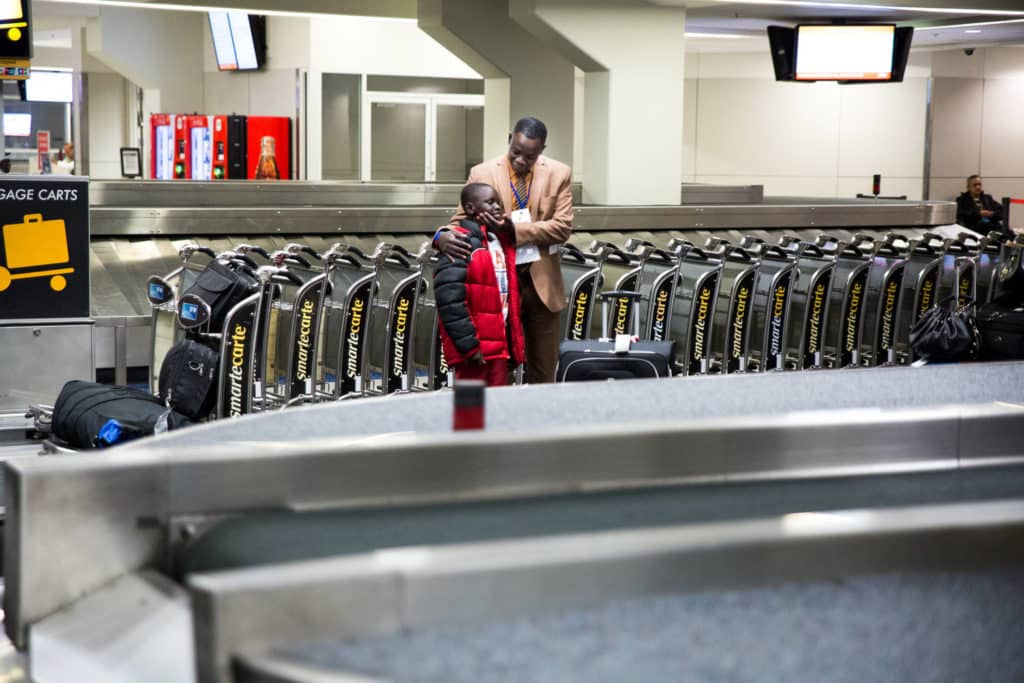 However, there was one small problem at the airport. Only one of Dyan’s bags arrived from Houston. The family waited another hour for the second bag to arrive, but what was one hour compared to the four years they had waited to finally be together again?

A Reunion Captured on Film 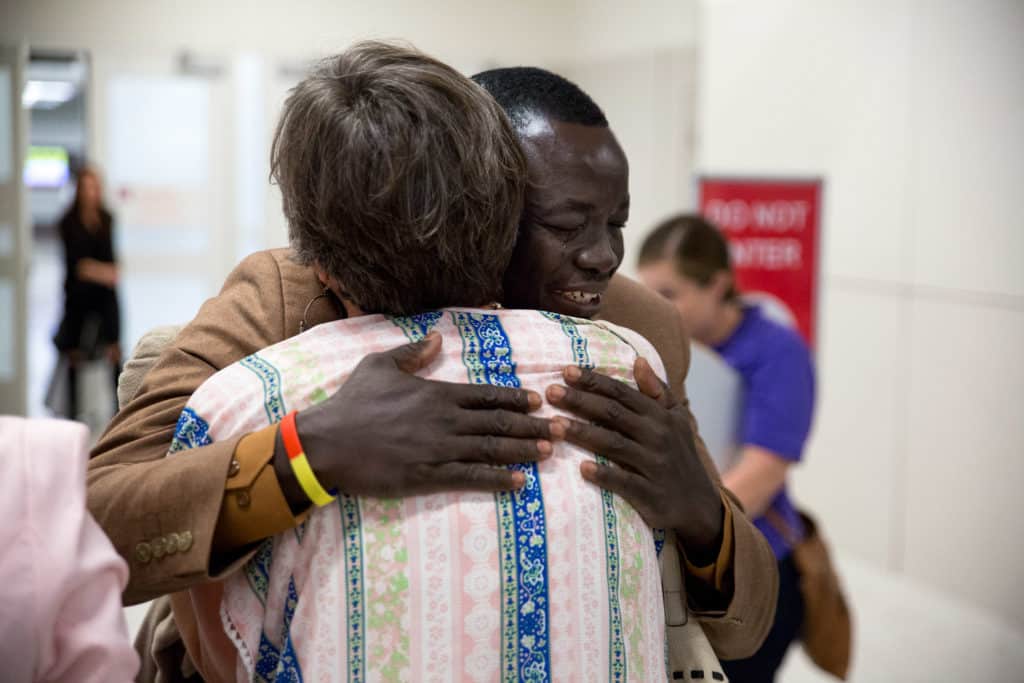 In addition to those close to Alik, there had been several people filming the moment in the airport. Robert Fuqua had this to say about the reunion. “A piece of the video that remains in my minds eye, yet in the interest of time lies on the cutting room floor, is a moment when this Algerian mom in the hijab goes over to Dyan’s wife and embraces her, greeting each of her children with encouraging words offered in a mutual tongue they share, but which I didn’t recognize. What I did recognize, however, was a shared joy emerging from a shared pain and anguish.” 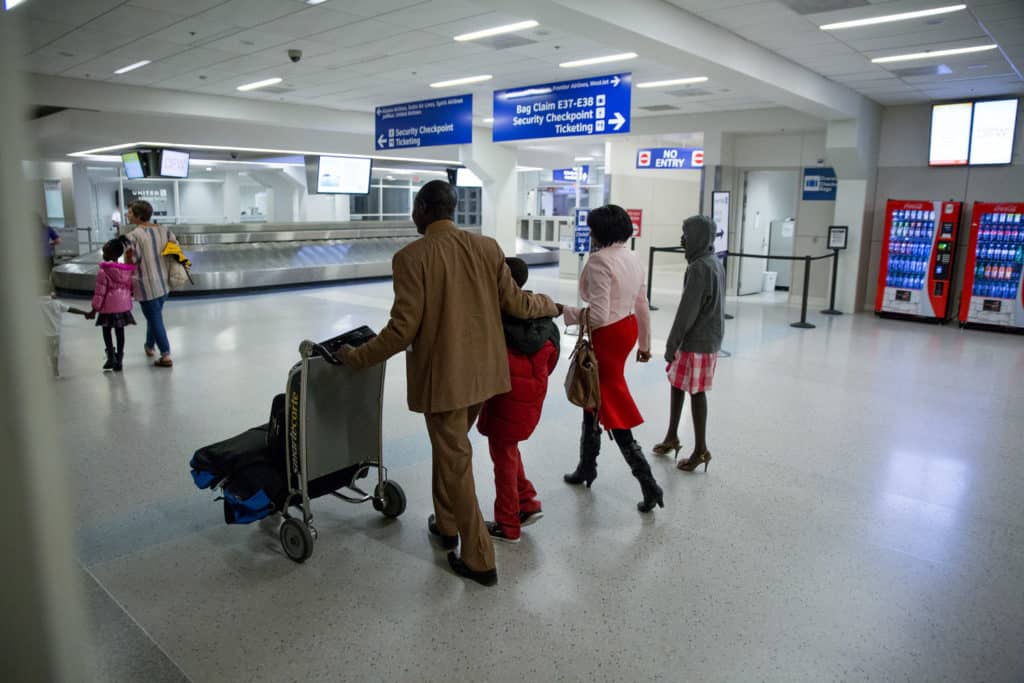 The drive home to the apartment complex was quiet. Both Alik and Dyan spoke very little, as her husband took in his new situation and thanked God for delivering him to his family. Upon arriving at his new home, Dyan only had one thing to say.