This Lion’s Rescuers Were Sure She’d Die. But Your Heart Will Melt When You See What Saved Her 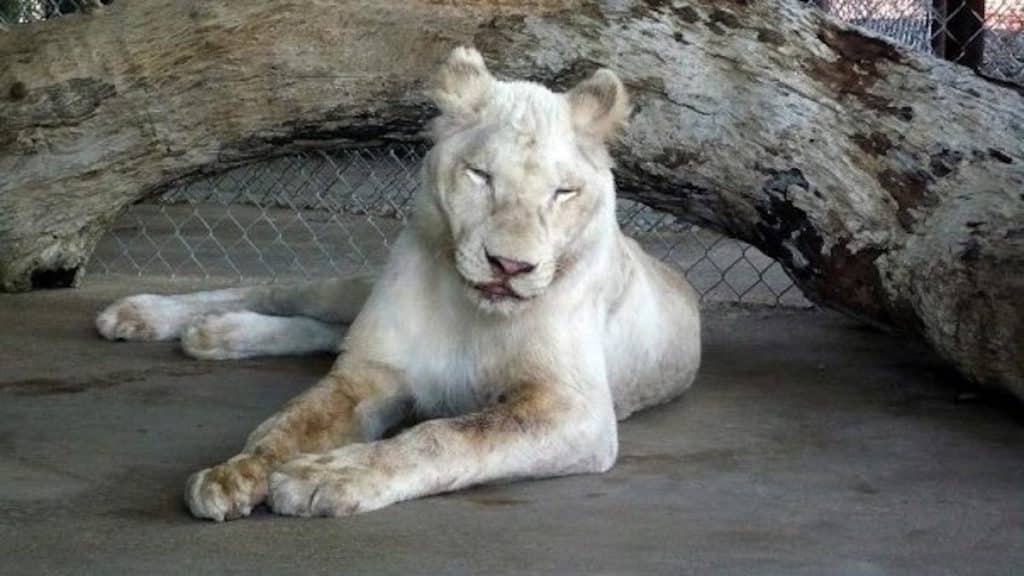 When caretakers first assessed a lioness that had come into their care, they were shocked by her condition. Not only was she gaunt and weak, but she was unable to even gather the strength to drink some water. While many felt she wouldn’t last, sometimes miracles do happen when you least expect it. 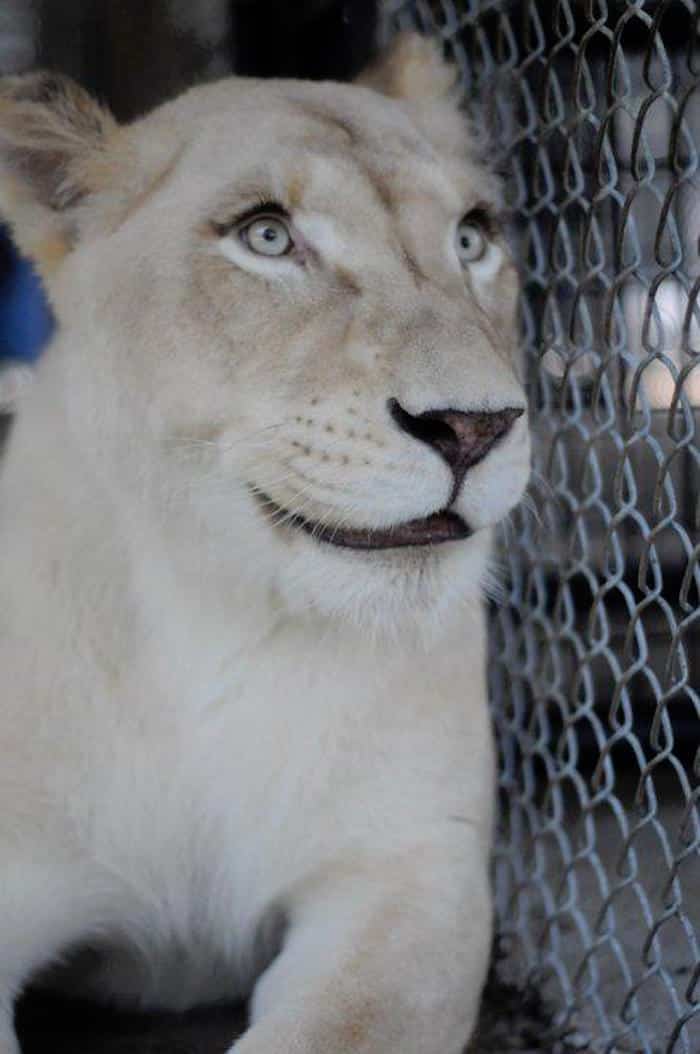 Back in 2009, a lioness named Sheila was rescued by the U.S. Department of Agriculture from an entertainment center in Texas. Horribly mistreated and exploited for private events, the poor lion had been so neglected she was on the verge of death. How could anyone do this to a living creature? 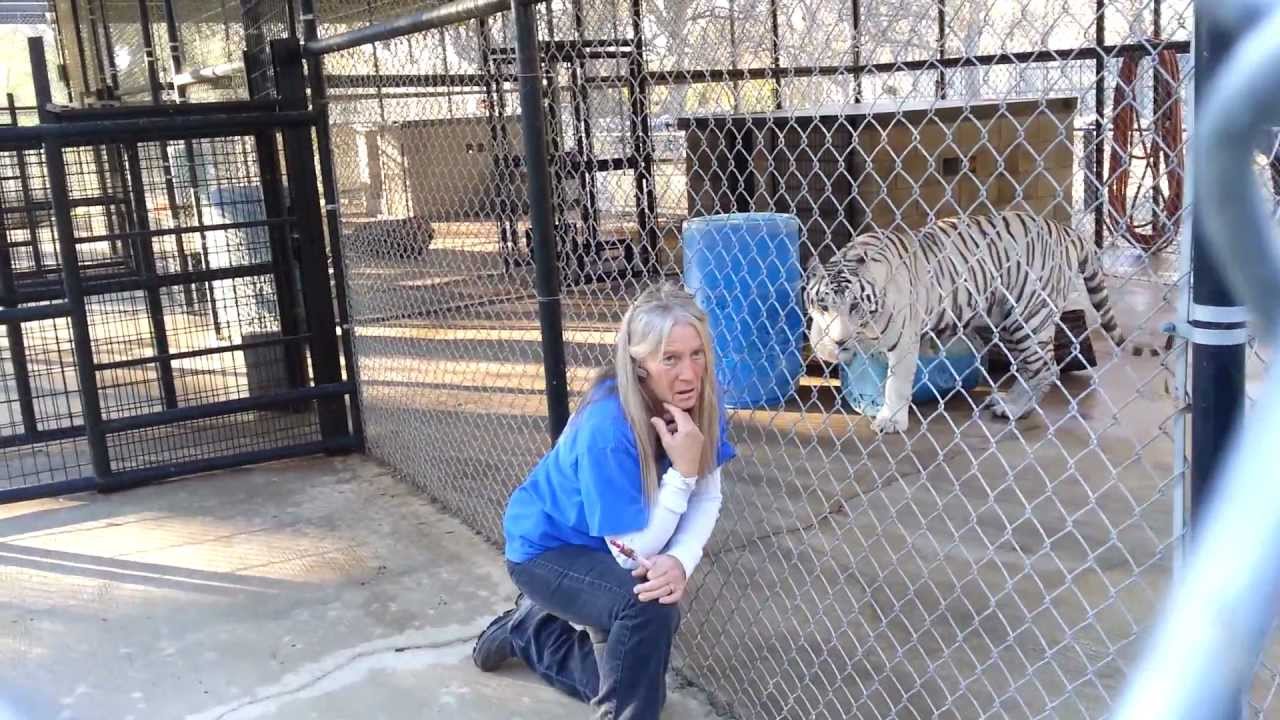 The USDA alerted In-Sync Exotic Wildlife Rescue of Sheila’s plight. While they believed saving her was a one in a million chance, they still examined her. Unfortunately, they determined a peaceful death would be the only option, she was simply too far gone. 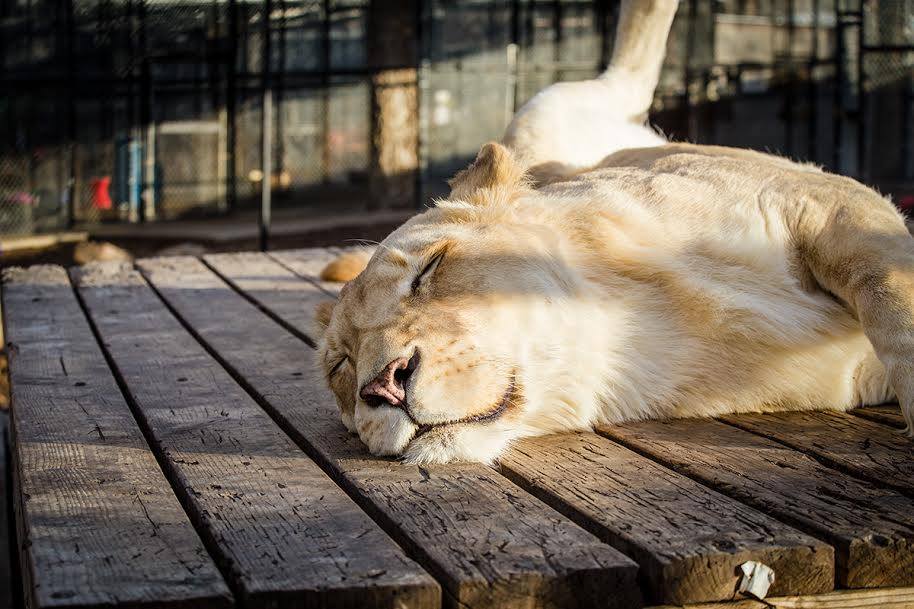 According to the rescue, poor Sheila was barely over a year old. Unable to walk, drink or eat, her muscle coordination was so poor, she could barely stay mobile. Being so young, the rescuers felt they would be unable to properly rehabilitate her.

Giving Her a Chance 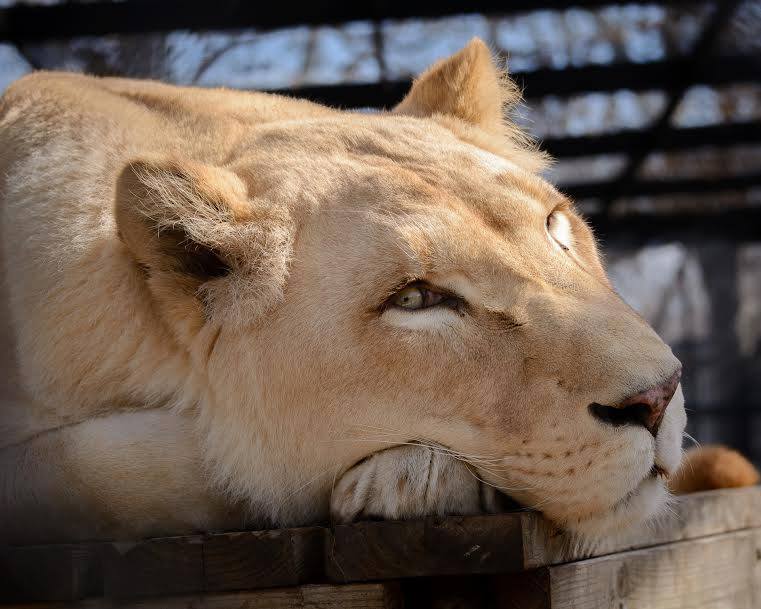 However, the rescuers decided to ultimately give the lioness a chance. Unfortunately, she was throwing up daily and pretty much fading fast. Would poor Sheila ever catch a break? 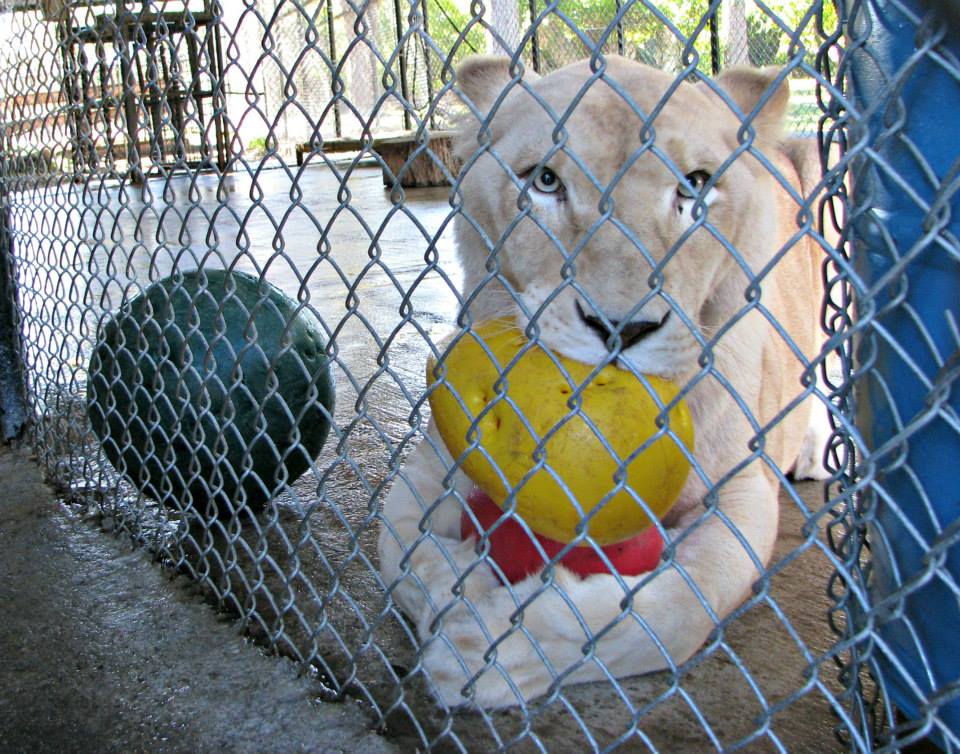 According to the rescue group’s CEO, she had to hand-feed Sheila for two weeks straight. Since Sheila could not support her head, another volunteer had to help prop her up so she could eat and drink. 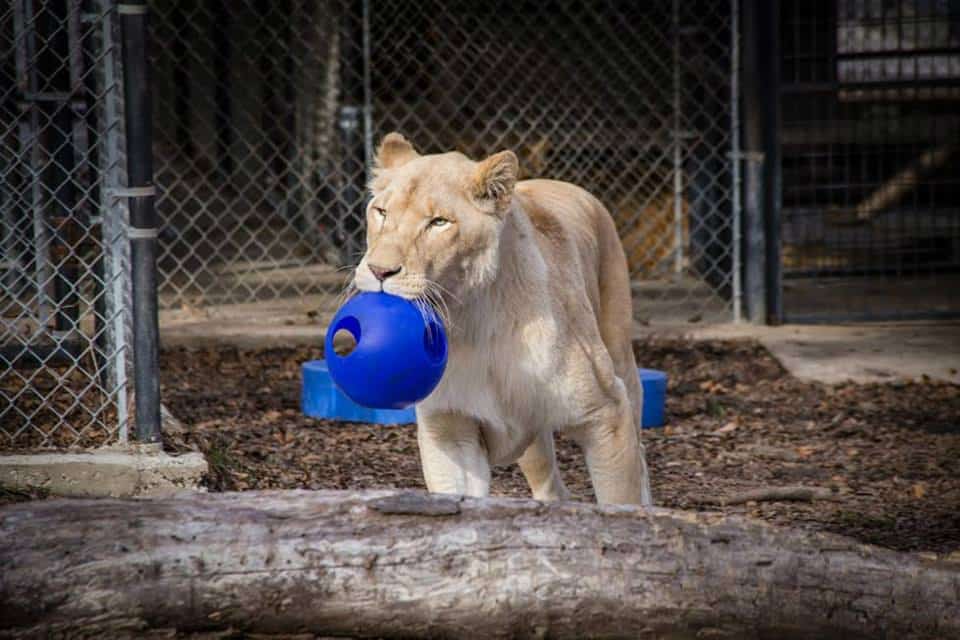 One sad fact about the exotic pet trade in the United States is that there is neglect and lack of overall care for the animals involved. This is due to the fact that most trade is done illegally, so the conditions the animals are kept in are sub par. 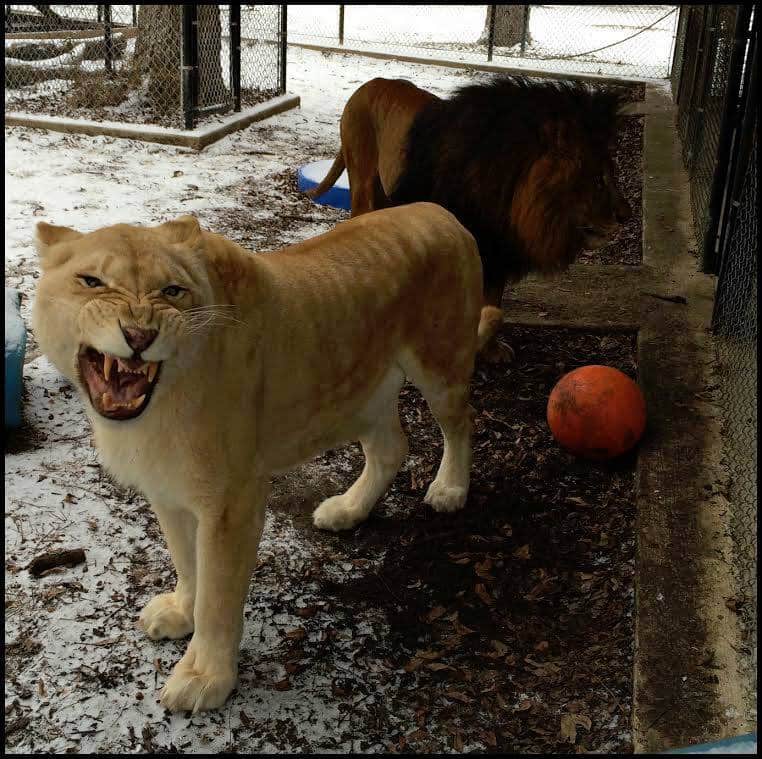 Sheila was considered to be a rare find due to her unique color. This colorization comes from a dormant gene that’s a color-inhibitor and is indigenous to the Timbavati region of South Africa.

Parasites and Lack of Vitamins 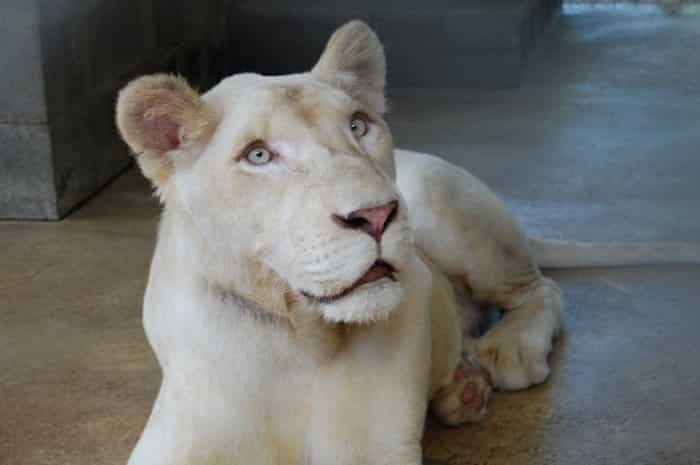 After multiple examinations, the rescue group determined that Sheila was suffering from a severe lack of Vitamin A and also had toxoplasmosis, which is a parasite.  While the parasite has no effect on humans, it can kill cats if left untreated. 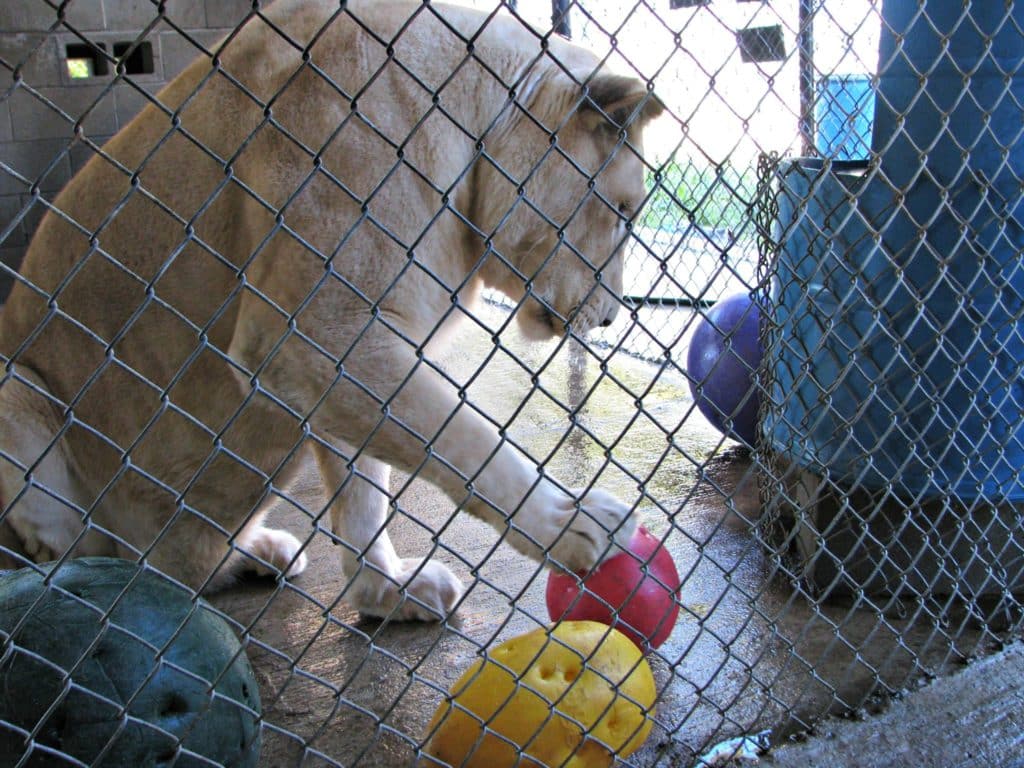 Knowing they had to work quickly, the caretakers immediately put the sick lioness on a treatment plan. And soon she began to feel better, but that’s not all that happened…

A Lion in Need 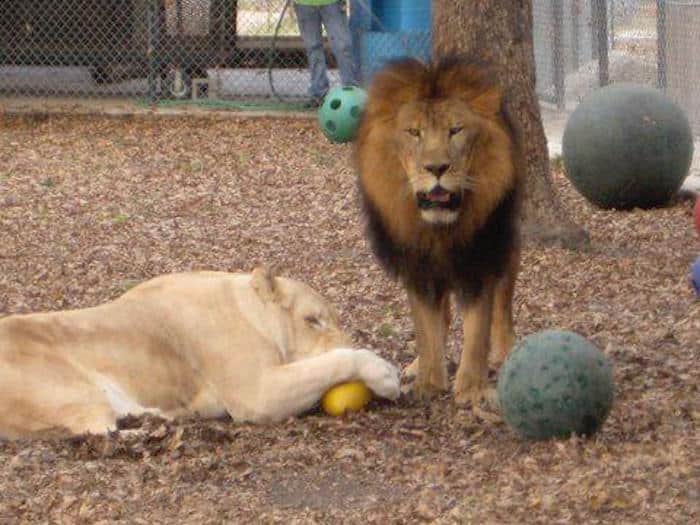 As Sheila continued to get better, it was revealed that another lion named Kahn had also been rescued from the same abusive center in Texas. Is it possible these two were destined to be reunited?

Anxiety and No Appetite 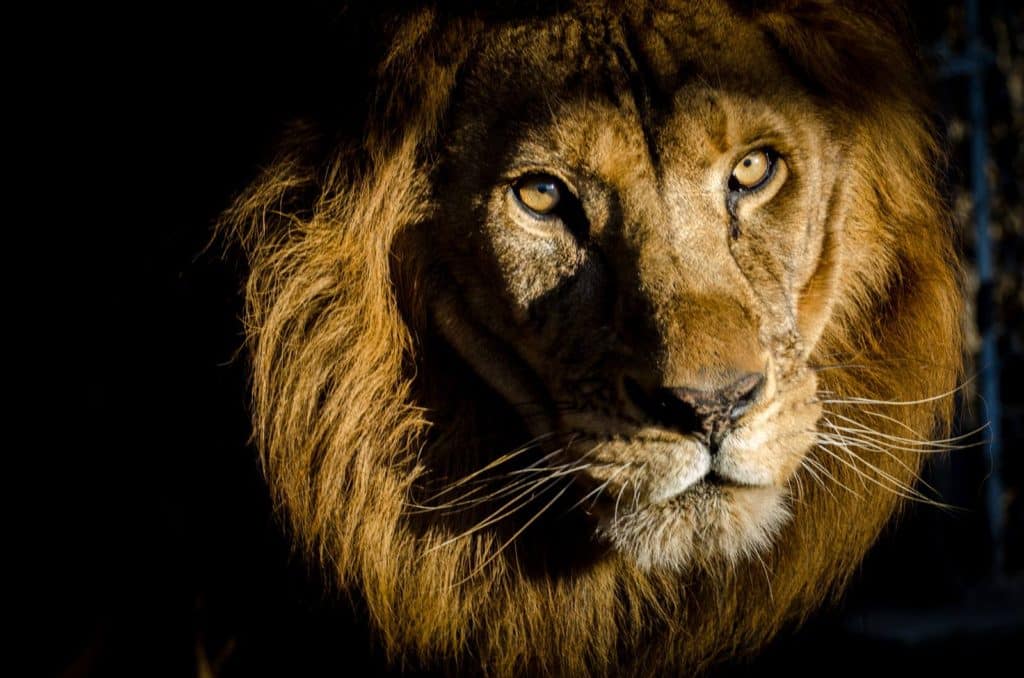 Before Kahn had been rescued, he had performed as a show animal. Unfortunately, the lack of proper conditions and the stress of performing had taken its toll on the poor lion and when he arrived at the rescue he refused food and bit his tail. 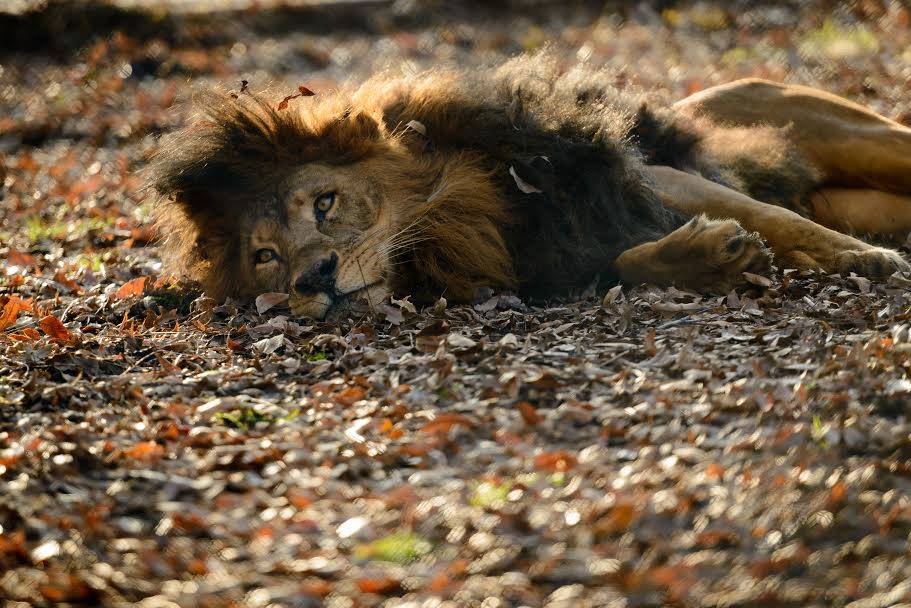 Kahn was also extremely underweight. He weighed 100 pounds less than he should have and had developed serious bone mass issues. Thankfully, as time went on he got better and his health soon improved.

Sweet Despite His Past 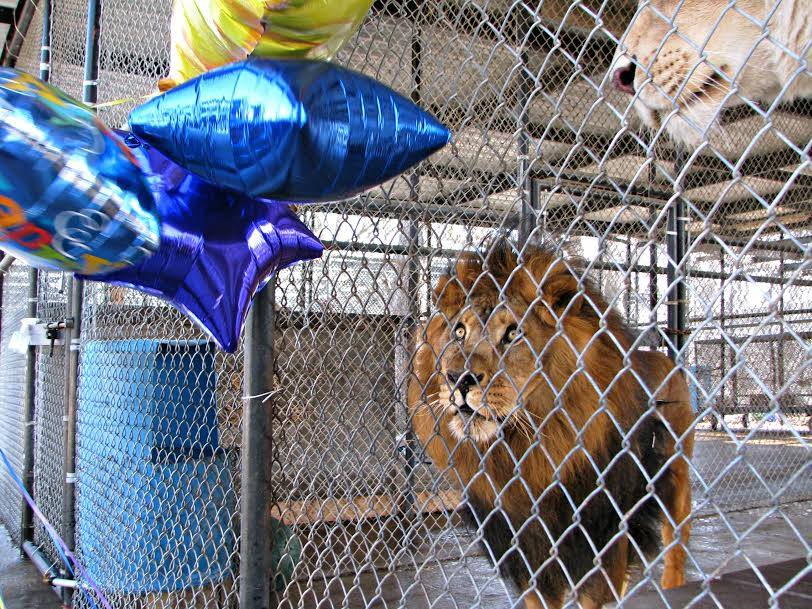 The rescue couldn’t believe Kahn’s calm demeanor and how sweet he was. Regardless of his injuries, Kahn improved, although he still can’t walk properly and tends to hobble around.

New Homes for the Big Cats 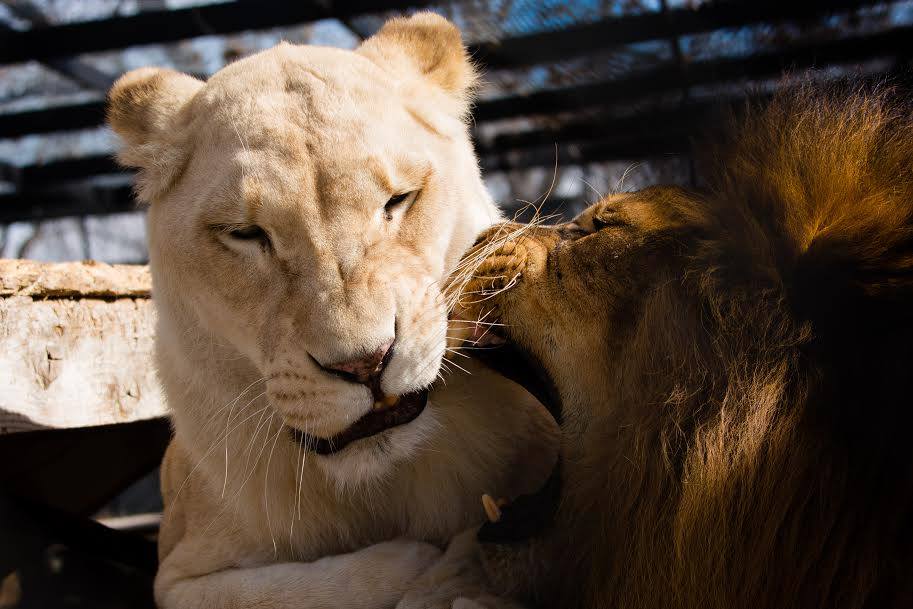 Thankfully, the rescuers built a set of cinder block stairs for the lion so he could gain easier access to his den. They also added a few other great perks to his new home. We have a feeling Kahn is going to be one happy cat! 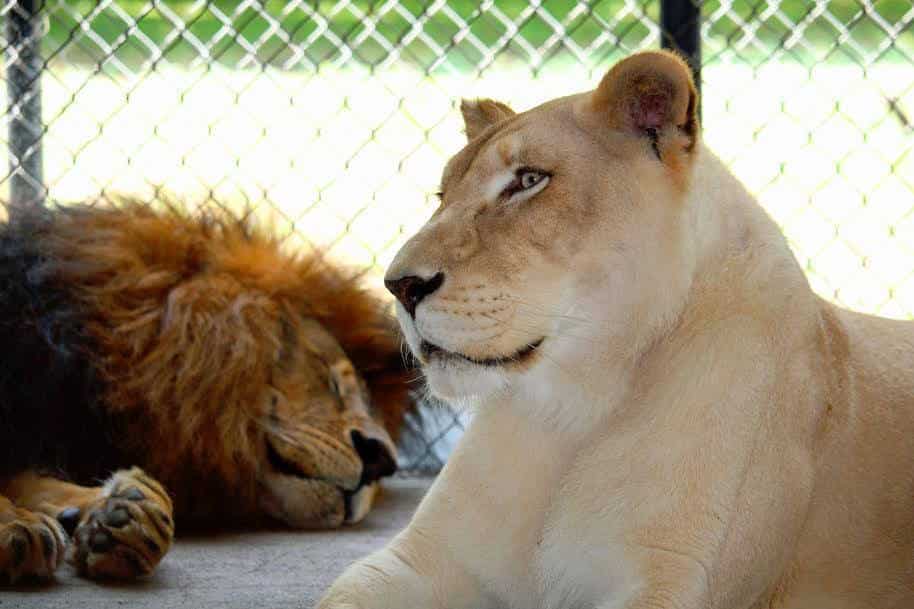 Although it took some time, the rescue center built new lion cages for bother Sheila and Kahn. Built side-by-side, the two soon became close friends and neighbors. How cute they are together! 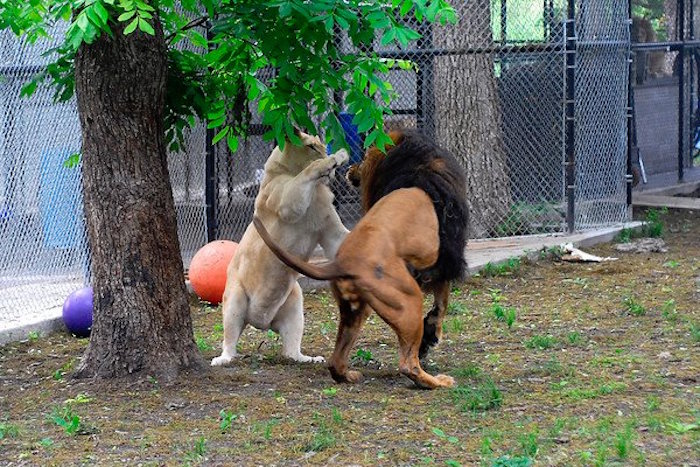 It didn’t take long before a mutual attraction developed between Sheila and Kahn. Their days playing together soon transformed into a romantic courtship. It seemed these two were destined to be love birds. 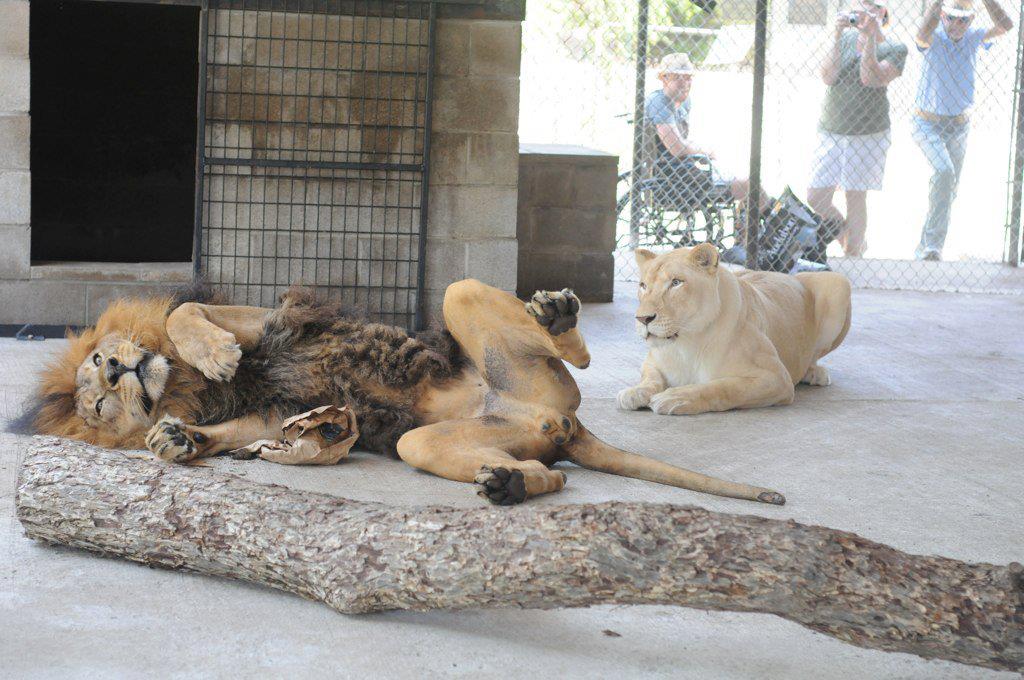 Realizing that Sheila was at risk for getting pregnant, the rescue group quickly sterilized her so there would be no unexpected surprises. They then continued to introduce the lions in a controlled environment for special dates together. 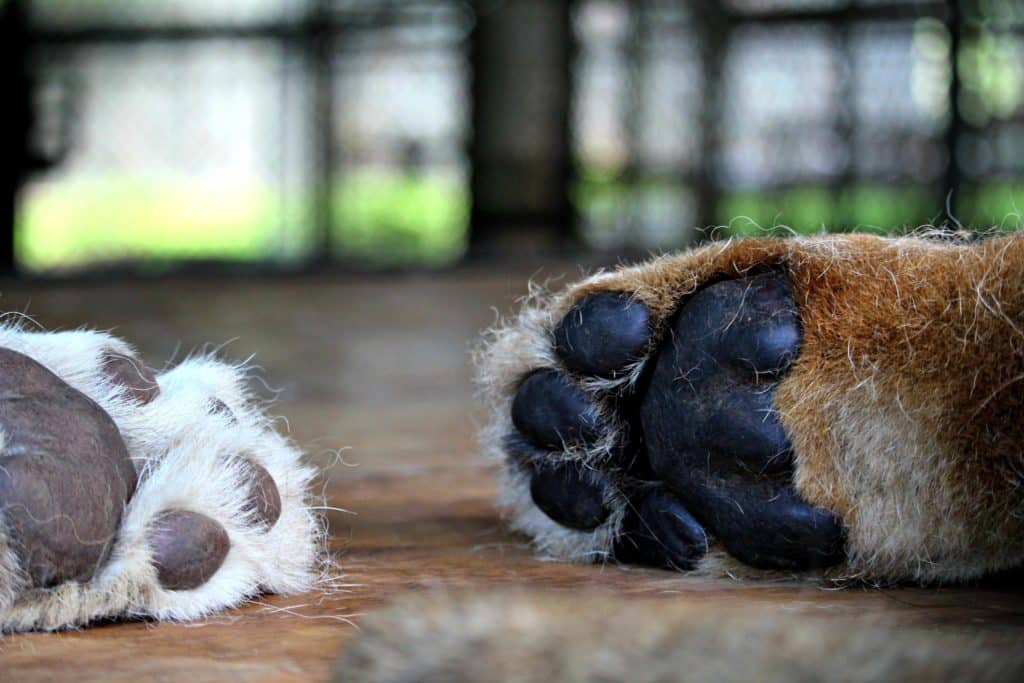 The daily dates soon developed into alone time together and eventually overnight retreats. According to the rescue group they eventually let the pair “get married.”

A Brand New and a Happy Future 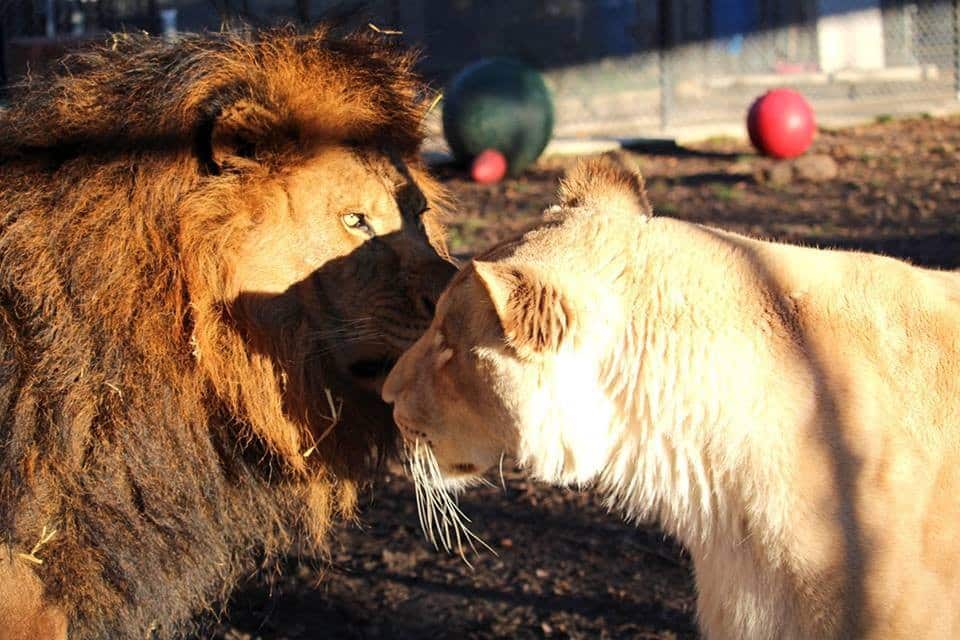 Now, Sheila and Stan spend their days sharing their wonderful new home together. Despite the pain and hardship they went through, they now have something worth living for—each other.