Python Takes Down a Crocodile

Have you ever come across something unexpected while you were out taking a stroll or enjoying an afternoon bike ride? If you said ‘yes,’ chances are you have probably never come across something as crazy as a python, and definitely nothing like a python stuffed with an unknown object to the point where it can’t even move anymore. Enjoy the following stories of pythons randomly being found with some unusual things inside of them. #15 and #7 will shock you!

This snake was discovered by a cyclist next to a trail in the Lake Eland Game Reserve in South Africa. As the individual moved closer to they animal, he realized that the snake was so engorged that it was barely able to move. Keep clicking to find out just exactly was found inside the python!

20. The Case of the Puffed Up Python 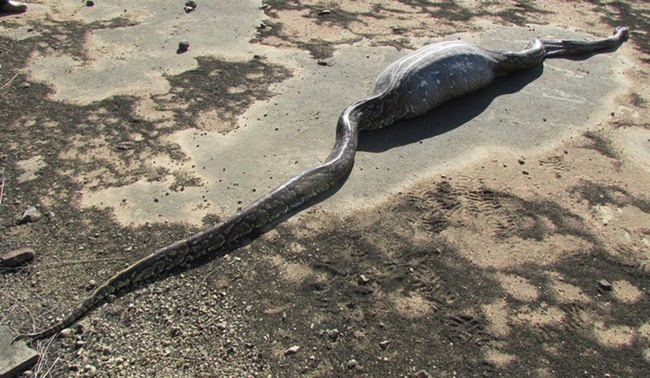 While pythons in this area of the world are known to be quite large, it was pretty evident to the cyclist that there was something stuck in the snake. These types of snakes are known as African rock pythons and they are nonvenomous. To kill their pray, they coil themselves around the animal and squeeze all of the air out of their lungs.

Find out what was inside the python on slide #5! 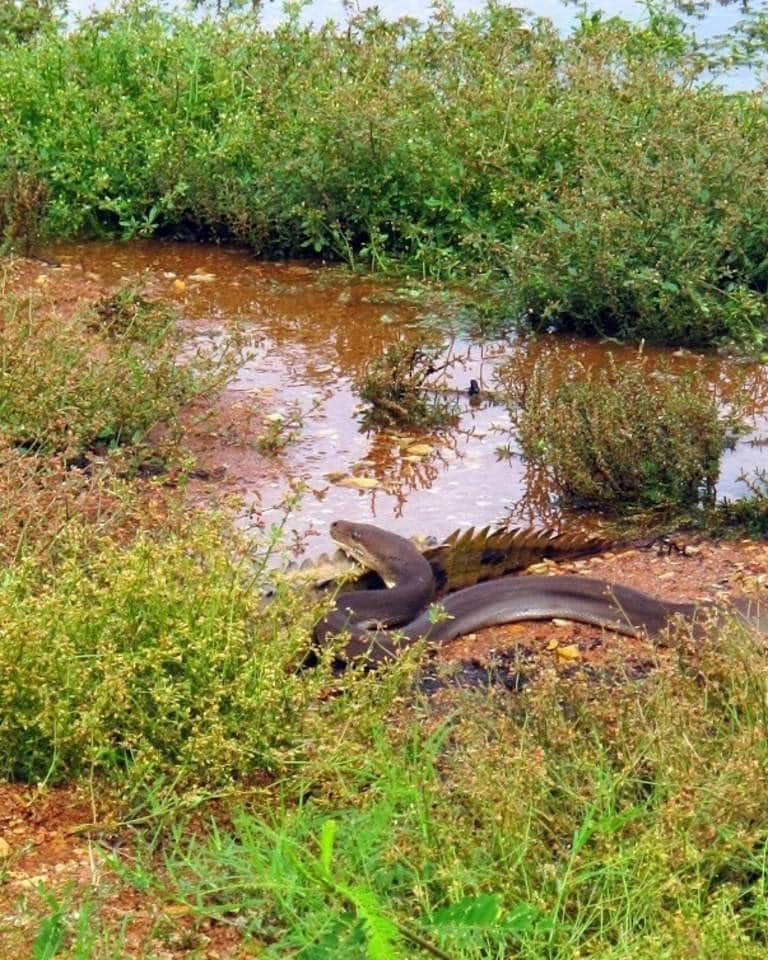 This image shows a python in Nigeria that decided to make a risky move and try to take down a crocodile. Keep clicking to see what happened next. 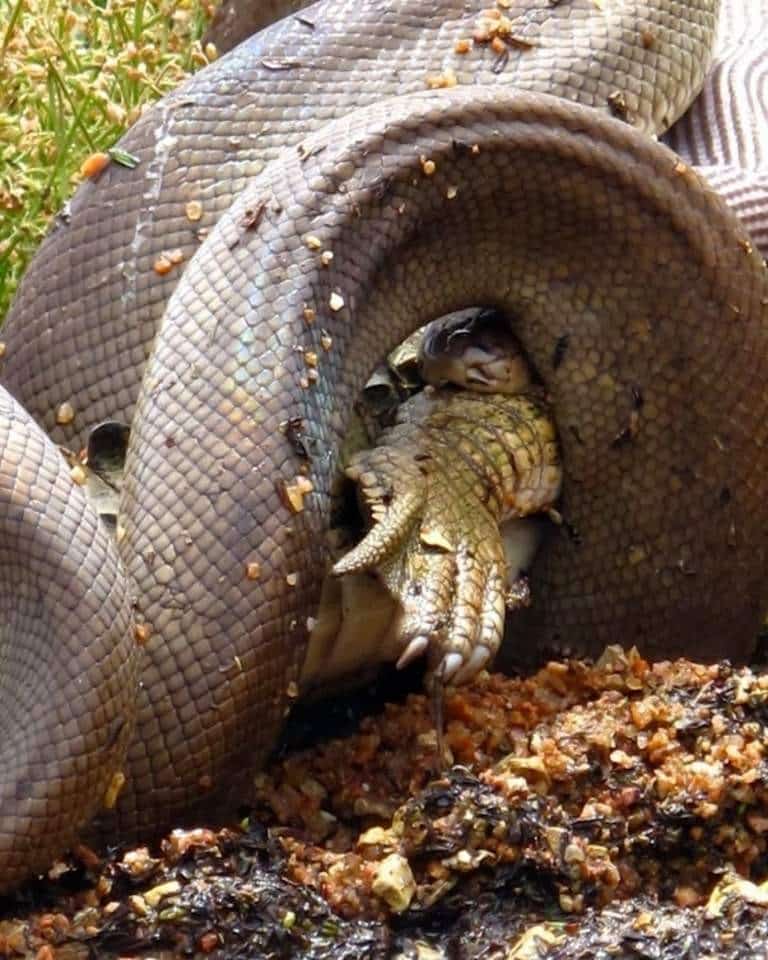 The python lashed out at the crocodile and began its infamous coiling and constricting. Try as it might, the crocodile was done for the moment the snake got a hold of it. Slide #10 will shock you! 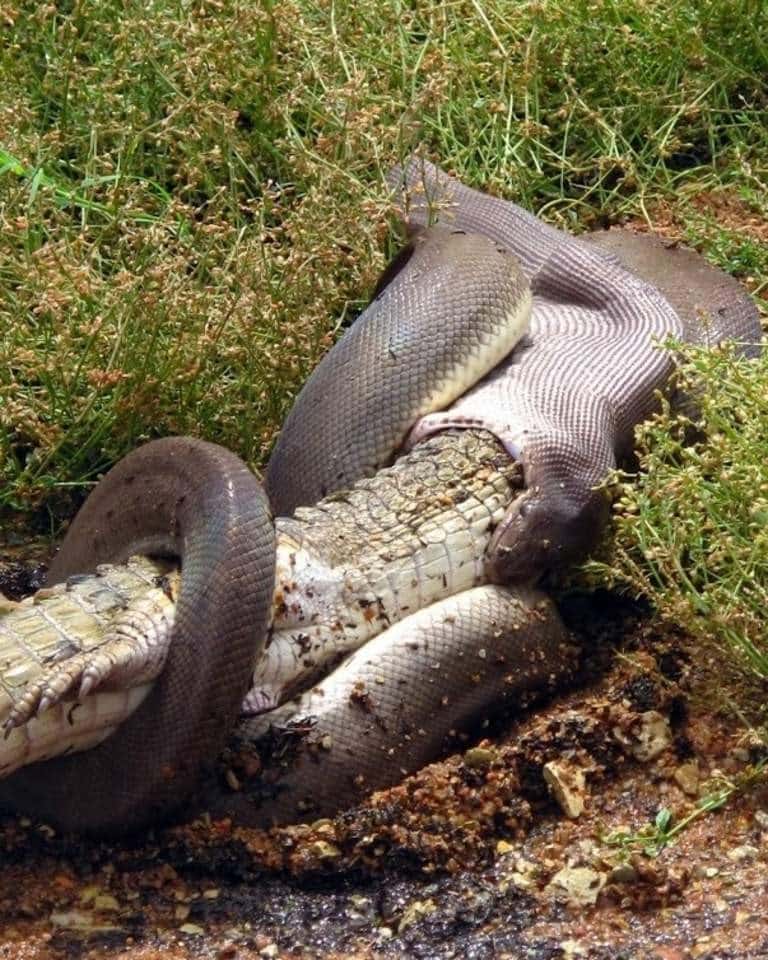 The python begins by swallowing the crocodiles head and then slowly works his way down the rest of the body. The snake’s mouth is extremely dilated in relation to the size of its skull. This is how they are capable of eating such large animals without hurting themselves. After a meal of this size, the python will be able to go months without eating again. Get ready to see something insane on the next slide. 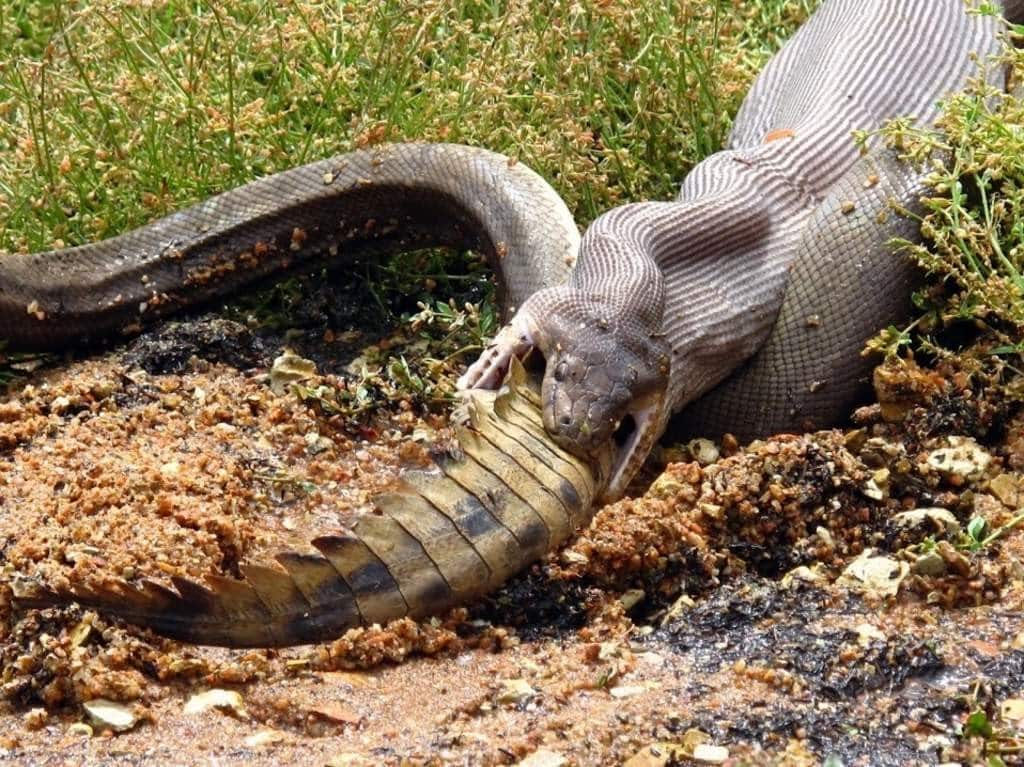 The quadrate bone is the key to snakes consuming animals much larger than themselves. This is an extra bone that helps unhinge their jaw and eat huge creatures such as a crocodile. Pythons also have backwards-curving teeth, which don’t allow their prey to break free from their mouths. Once inside the python’s stomach, the animals are slowly digested over weeks or even months.

Something even crazier lies ahead. Keep going! 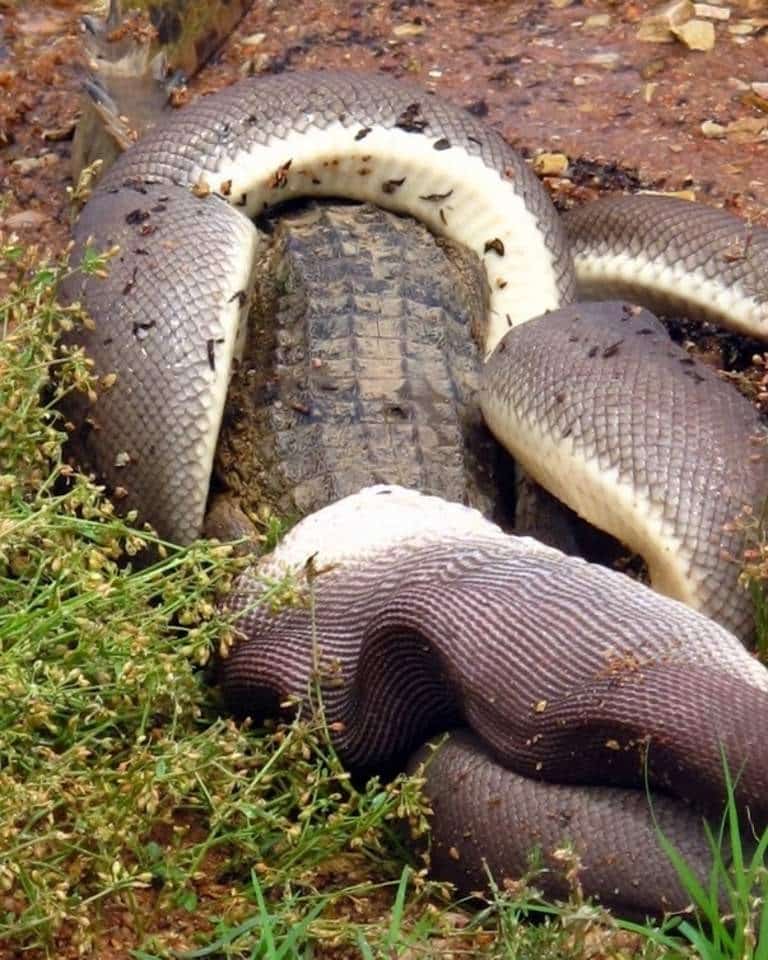 Pythons take the head down approach when swallowing their prey. It is much smoother and easier than trying to go from the bottom up. Although pythons are nonvenomous snakes, they evolved from a venomous ancestor. They do produce a very small toxins which shows that pythons of the past may have been more venomous, but outgrew it when the art of constriction began to evolve. 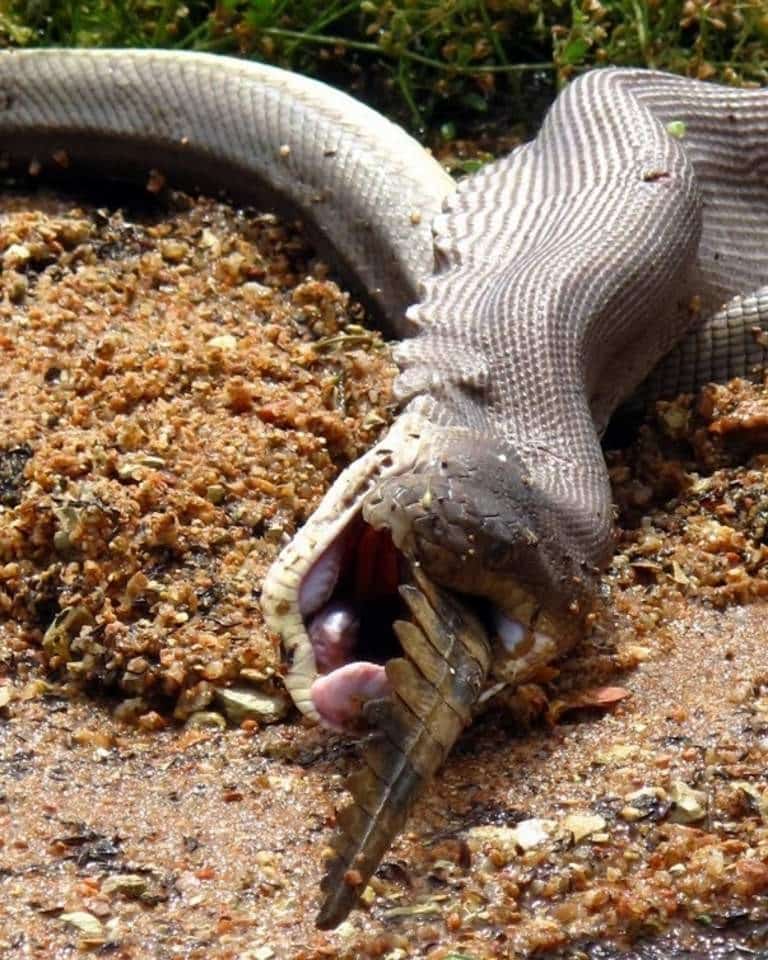 The probability of seeing this process for yourself is actually more possible than you might think. Most species of python are available for purchase as exotic pets. However, there have been a few instances where the python owners end up being their pets’ meal. If you do decide to buy one, just be careful. Keep going for the NEXT VICTIM. 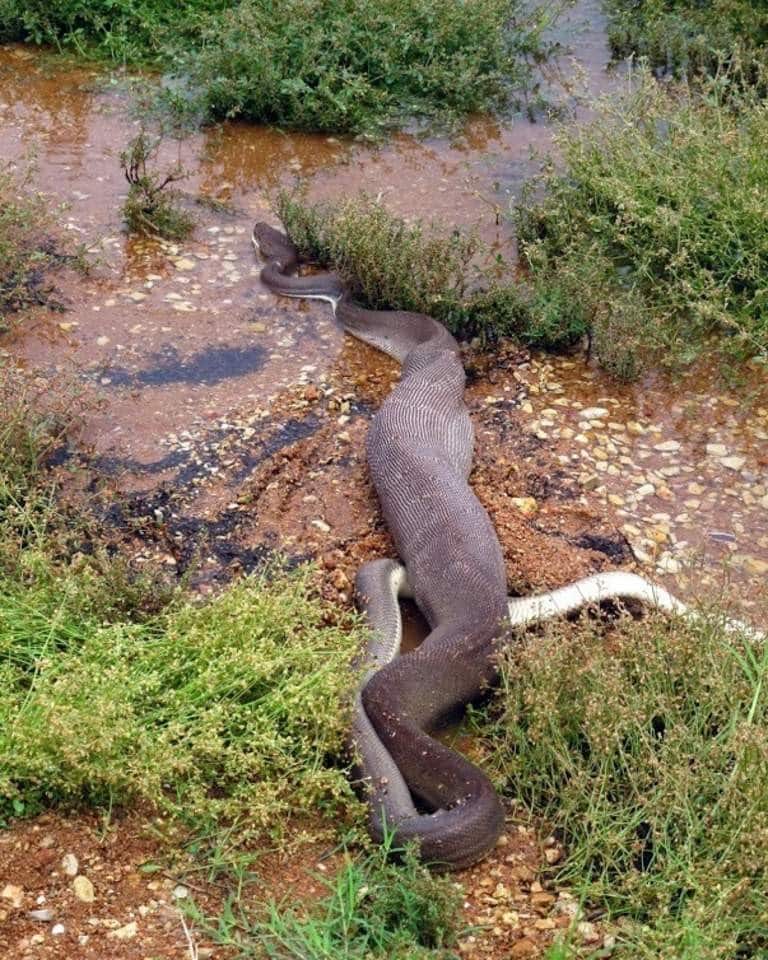 The next animal found in a python will blow your mind! 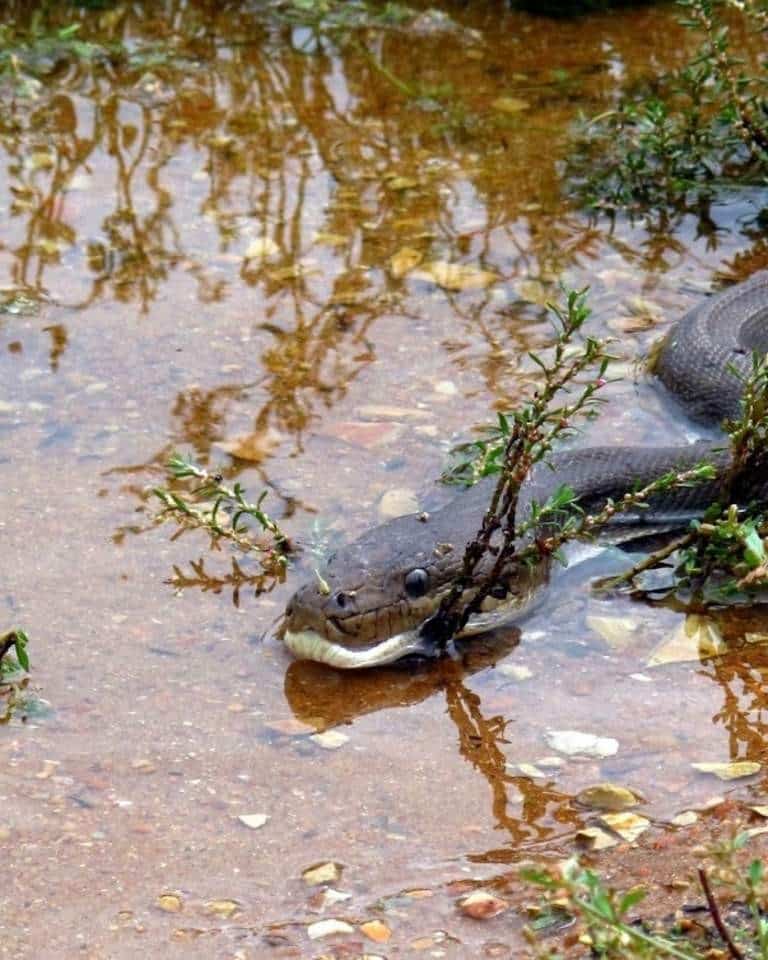 Who would have thought that a python would be able to take down a crocodile with such grace and ease? I bet the croc was pretty shocked by the outcome, too. You won’t believe the size of the prey on the next one. 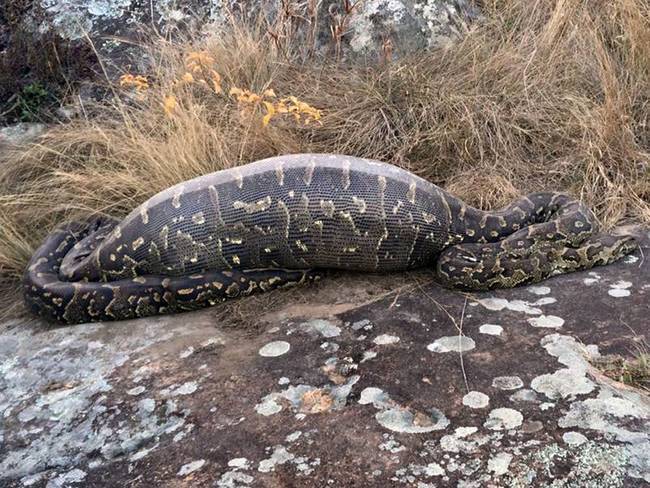 Rock pythons are supposedly able to grow up to twenty feet long, though one that big has never actually been found. They largest ones confirmed are around sixteen feet and can live up to twenty-five years. It’s also pretty remarkable how wide the python can stretch itself when eating something so large. Keep going. You don’t want to miss what was found inside this big boy. 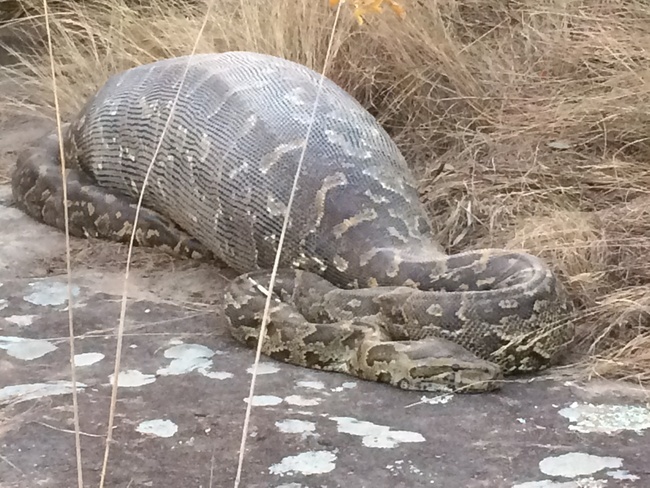 Upon initially seeing this image, one might go as far as to assume that the python had swallowed a person. Luckily, that’s not what happened. Some people guessed that it had swallowed a young impala, while others thought a warthog was possible. I had several guesses myself, but it turns out that we were all incorrect. 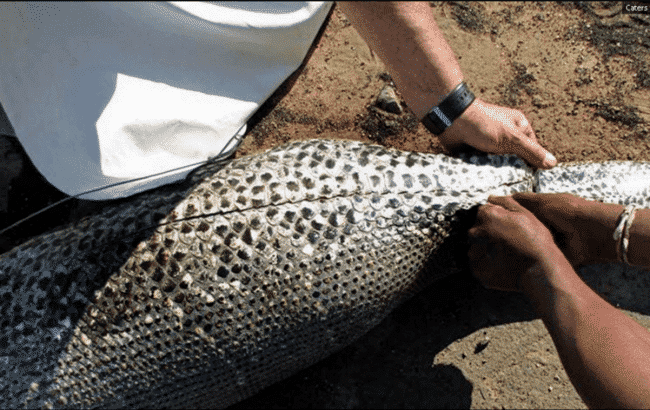 The snake was found dead beneath a rocky ledge. Most likely, it fell off and was internally damaged by whatever was inside of it. Researchers were eager to get cutting and find out what mystery lay inside the python.

The image on slide #4 is insane!

8. A Big Head, An Even Bigger Body 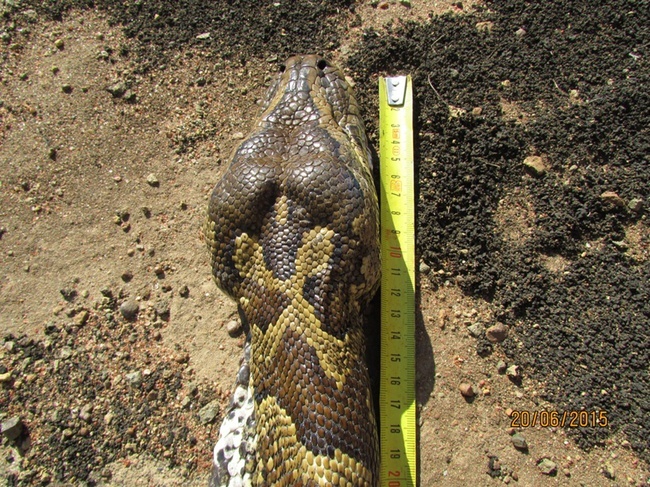 This python really could have eaten anything. Rock pythons are such opportunistic and diverse eaters that one was seen chowing down on a fully-grown antelope. To ensure that whatever animal is being consumed goes down the right way, pythons very slowly expand their bodies until enough room has been made.

Don’t stop here! The best is still to come. 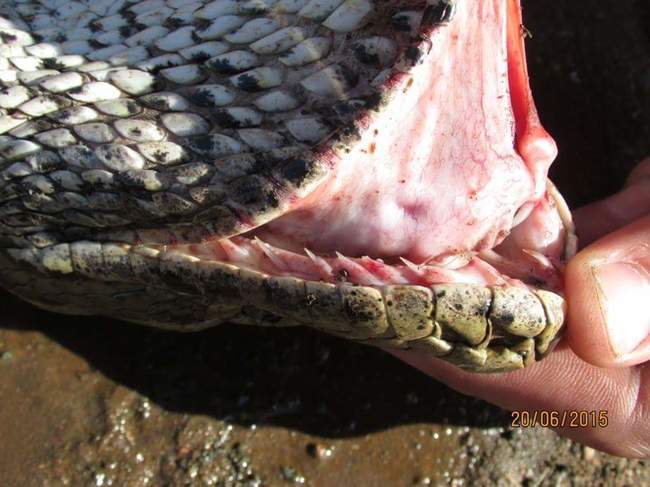 Firstly, researcher look at the front row of the python’s backwards-curved teeth. The snakes have many rows of them, which sink into their prey and guide them downwards into its throat without being able to escape. While some believe that pythons unhinge their jaws to swallow prey, their jaws are actually loosely connected to the snake’s skull by the quadrate bone.

6. The Truth is Revealed 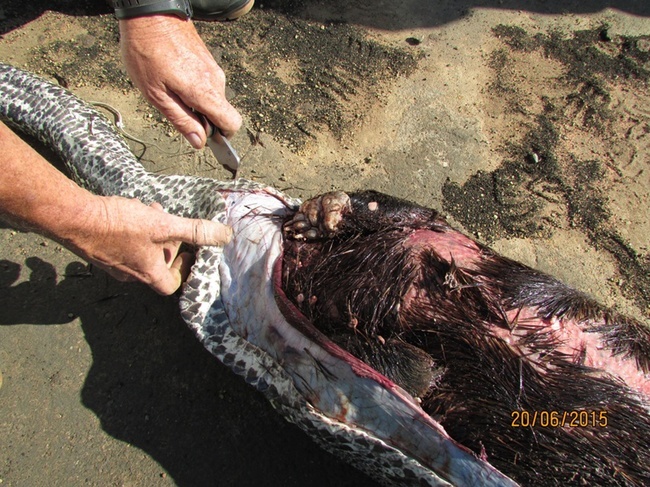 Researchers sliced open the snake’s stomach with a razor and peeled back the flesh to reveal the partially-digested corpse of a very large porcupine. Upon first glance at the image, it looks just like a large animal covered in a thick fur, but researchers soon realized the truth. While the snake had some guts taking down a rather large porcupine, it clearly wasn’t the best move. Keep clicking to see even more insane images.

5. A More in Depth Examination 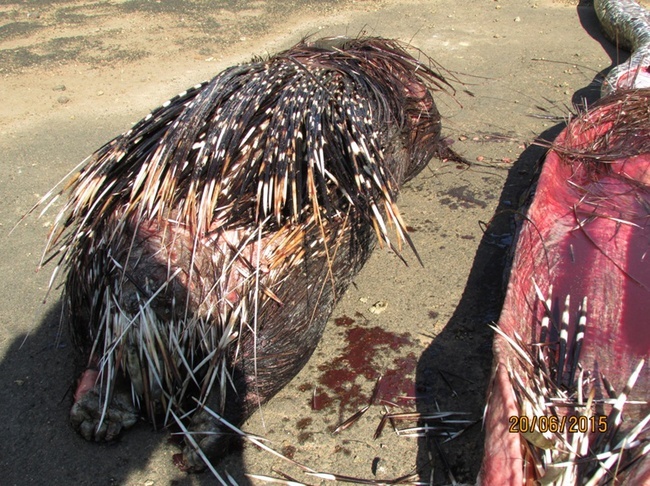 The porcupine was massive by the usual porcupine standards, but Cape porcupines are the largest rodents in southern Africa and the largest species of porcupine in the world. Thirty pounds or more isn’t that unheard of for a Cape porcupine. The spines are typically two inches long and are combined with shorter defensive quills. Cape porcupines’ have hollow tail spines that they shake to warn others. 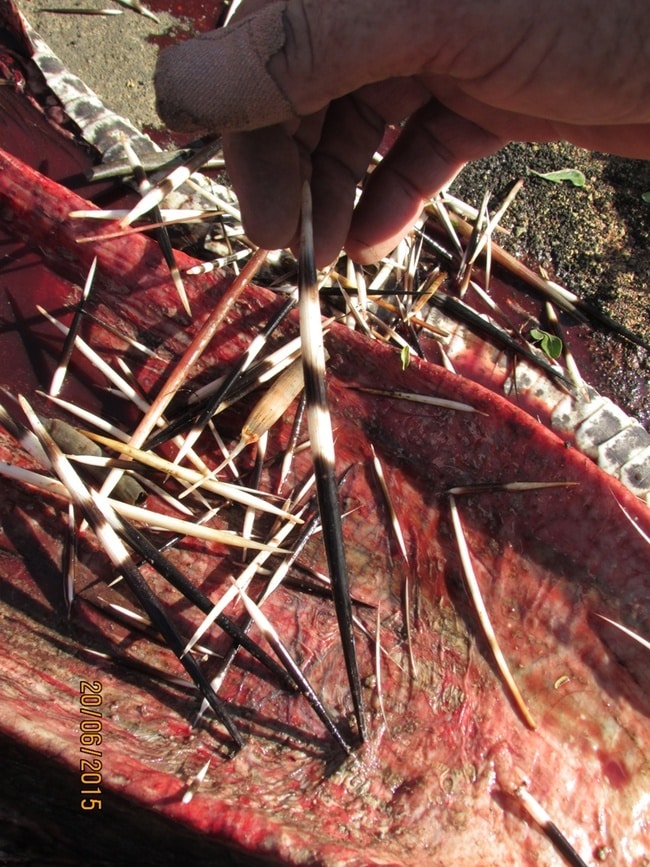 The researchers who examined the body believe that the snake fell off of a rock ledge and, with a stomach full of porcupine spines, ultimately died. Usually, when pythons swallow prey, they can alter their metabolism to help the digestive process and make their organs smaller to free up space. If the python hadn’t fallen from the ledge, it probably would have been able to eventually excrete the spines.

Keep going. We saved the best til last. 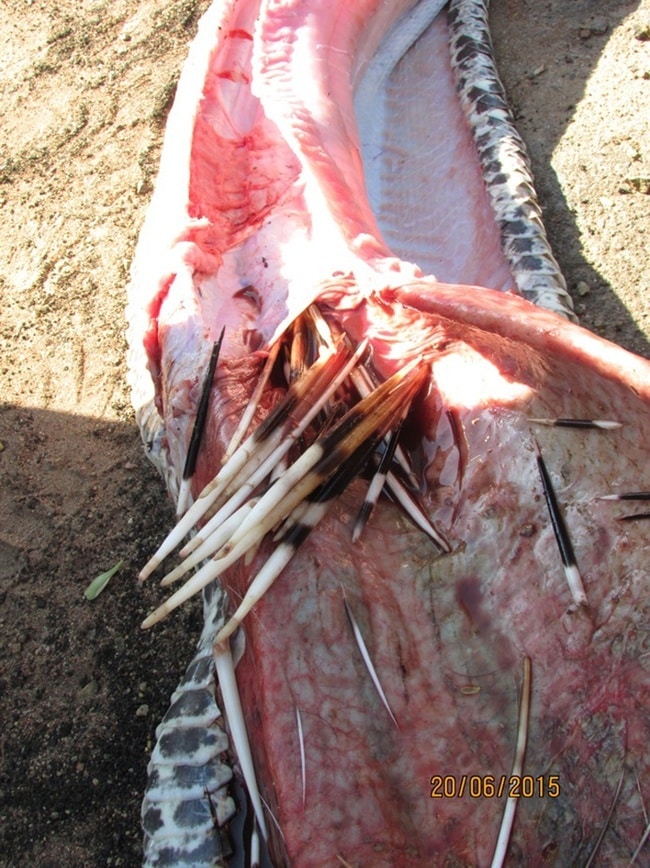 Most pythons are able to eat large porcupines with no harm being done to them. While it is possible that the undigested quills punctured one of the python’s internal organs and killed it, the most likely cause of death was a fall from the ledge. Pythons have very large appetites, which can lead them to make some questionable meal choices.

TWO slides left. You can do it! 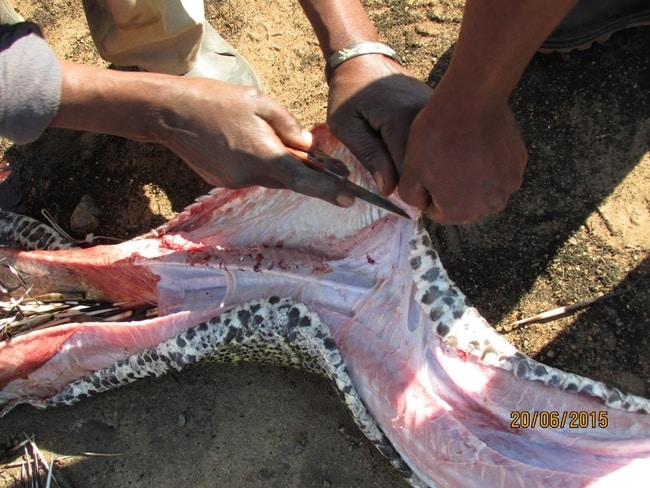 The snakes skin was removed once the porcupine had been taken out of its stomach. From this python’s death, researchers were able to collect data that will hopefully allow scientists to better understand python’s eating habits.

CHECK OUT THE NEXT PAGE FOR A >>VIDEO<< OF A CROCODILE FIGHTING A PYTHON!

1. Video of a Python Fighting a Crocodile