We have gathered a list of mysterious discoveries, various items of intrigue, and entire civilizations that experts stumbled upon during excavations. This list is especially for you if you hate dust and human remains!

Stonehenge is one of the wonders of the world and is located in Wiltshire, England. The monument consists of 75 giant stones that are all roughly around the same height, width, and weight. The giant stones reach about 13 feet high and almost 7 feet wide while weighing nearly 25 tons each. The origin of the stones construction is believed to be around 3000 BC and it remains one of Englands most popular monuments. 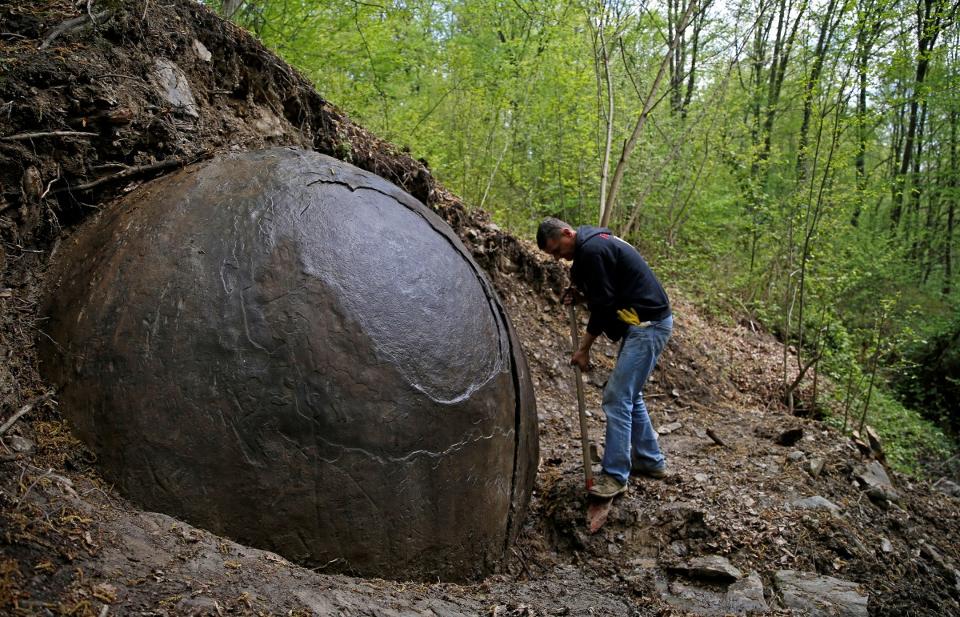 Bosnia and Herzegovina is home to one of the most interesting rock formations known to man. Archaeologist Semir Osmanagich discovered the massive stone sphere and believes that it is a creation of a lost civilization but many believe it is a natural formation called a concretion. Either way, it’s pretty amazing. 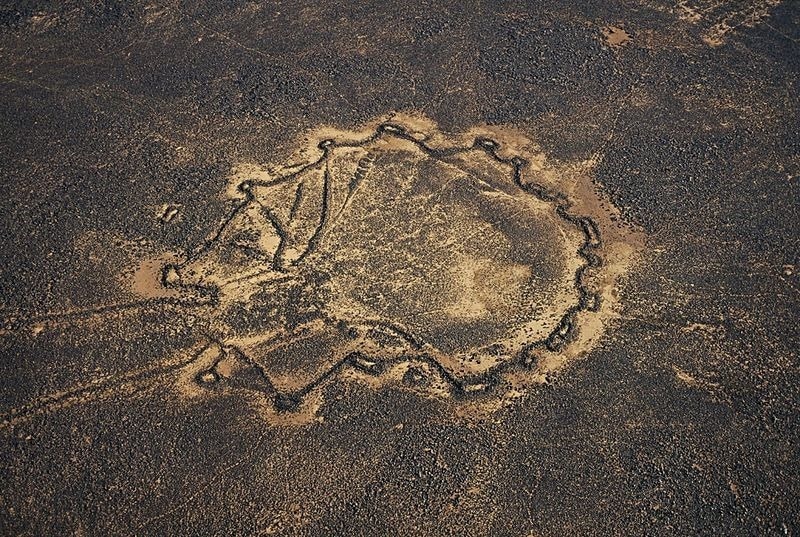 In the deserts of Egypt and Jordan, archaeologists have found ancient animal traps that cover vast areas. The traps are formed out of many lines that come together at a singular point, suggesting our ancestors around 2,400 years ago knew more about hunting than previously thought. The traps were first noticed in the 20th century by pilots and aerial photographers. 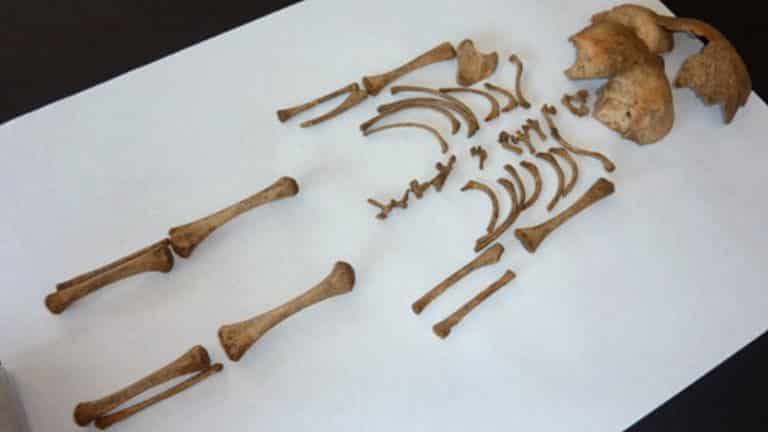 A farmer in the middle of Buckinghamshire came to realize that part of his land had a gruesome history, and there was a lot of evidence left behind. The site is believed to be an ancient brothel used by the Romans and was also used as a baby graveyard. Nearly 100 skeletons were found on the farmers land and all of which were most likely murdered. Infanticide was more common at the time of the Romans due to the lack of contraception, as it’s likely the babies were murdered by the working mothers of the brothel. All of the skeletons were around the same age, around 40 weeks gestation making all of the victim’s newborns. 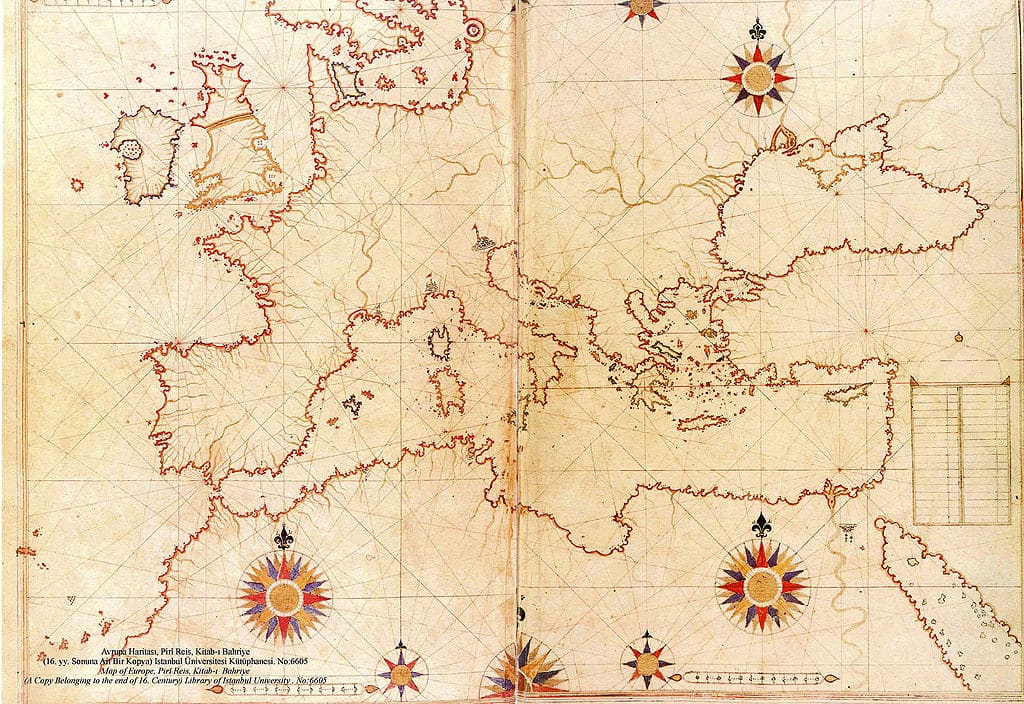 The Piris Reis Map was created in the early 1500’s and is named after its creator. The map is exquisitely accurate and shows the coast lines of Africa, Europe, and South America almost perfectly. The map was found in decent shape, which adds to its unique qualities. Some believe the cartographer used pieces of other maps to accurately place the continents. 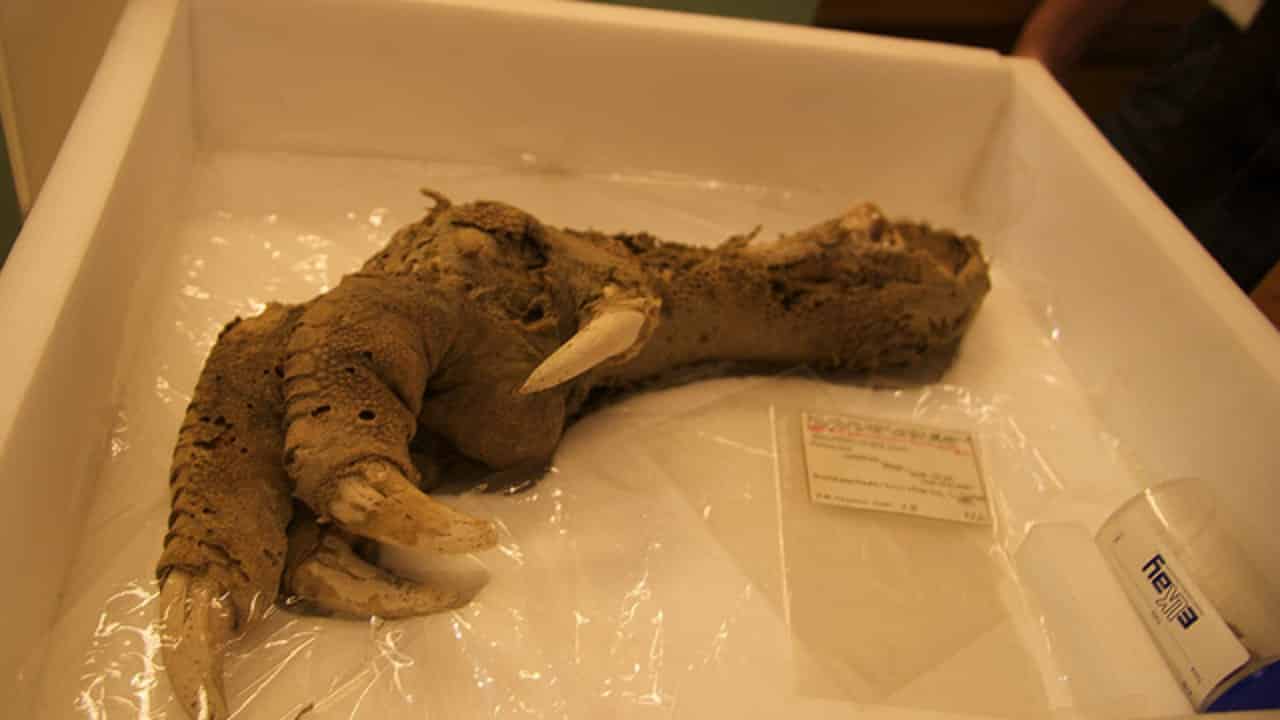 New Zealand is home to a cave system called Mount Own, and deep within one of the caves something quite shocking was found. This giant claw looks to be from an animal that recently died from the level of decomposition, but in reality, it actually belongs to a long extinct bird called the Upland Moa. The giant bird had some fierce claws—you can even see the detail on the skin! The perfectly preserved foot looks like it’s from a movie set, but researchers discovered it deep within the cave in 1986. 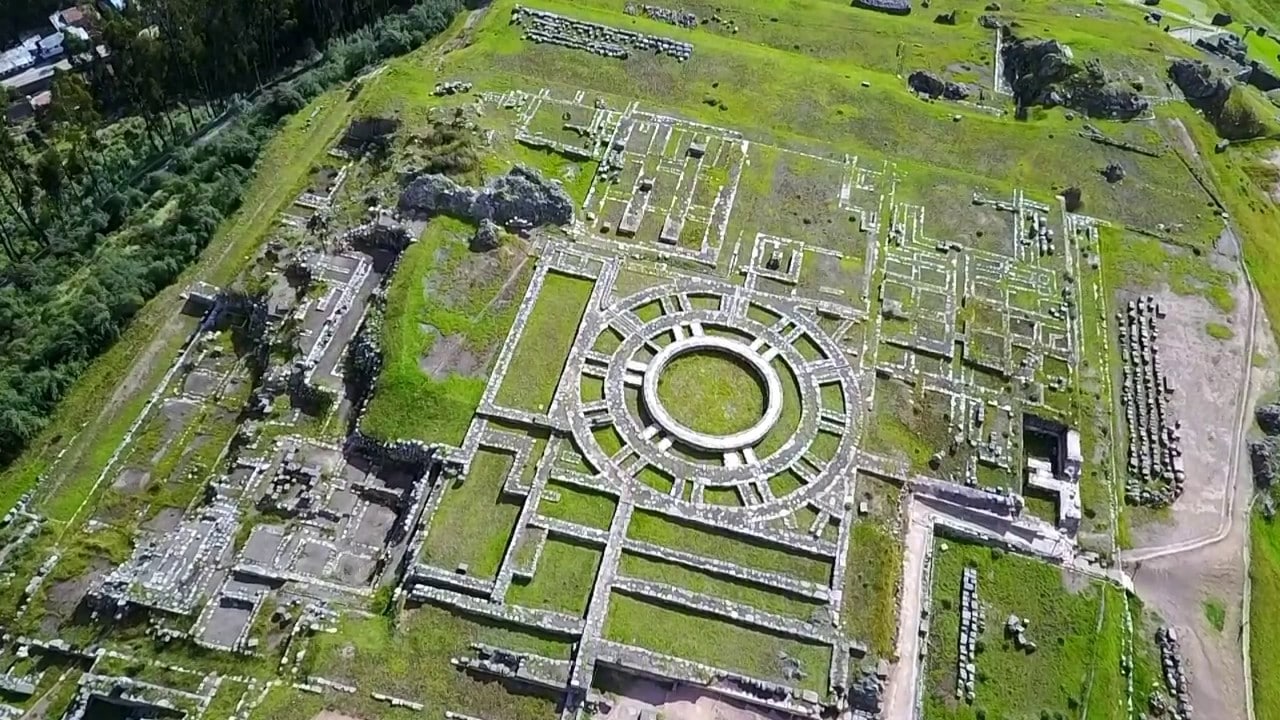 Cusco, Peru is home to one of the world’s most complex ancient structure that is still intact. The ancient Incan built this magnificent walled structure most likely to symbolize the center of their town, or perhaps their capital. The walls are beautifully built and they all fit surprisingly well, as the design and structures themselves are engineered to perfection. Carbon dating suggests that the first time the structure was created or inhabited was around 900 CE.

The Baghdad Battery refers to the three artifacts that were found together near modern day Khujut Rabu, Iraq. Although the combined artifact is actually an early version of a battery, it is unclear if the peoples who created it knew its full potential because there are no known electrogilded instruments from this time period. The clay pot consists of a rolled copper tube and another metal rod that is placed inside of it. There is much speculation about the purpose of the artifact, but one thing is for sure, and that’s it was ahead of its time. 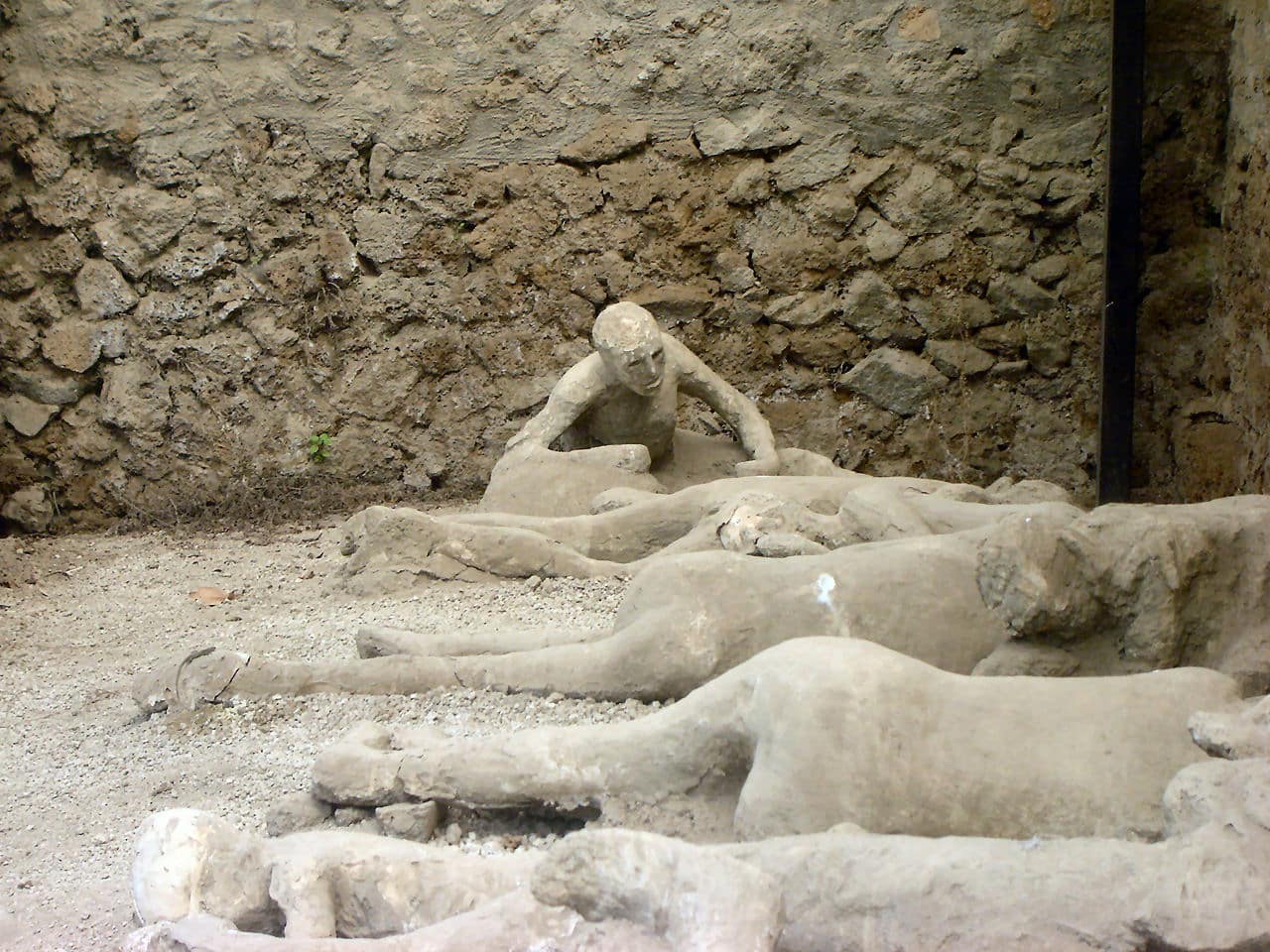 Archaeologists discovered Pompeii in the Southern part of Italy’s Campania region, and it continues to be one of the most intense and shocking archaeological sites known to man. Pompeii was a city that fell victim to an eruption of Mount Vesuvius in 79 A.D. The town was covered in ash and lava, which is why it remains so perfectly intact. The chilling scene consists of animals, structures, and people stopped in their tracks, forever remaining frozen in time. Some devout Christians believe that the town and others that suffered the same fate did so because they disobeyed God. 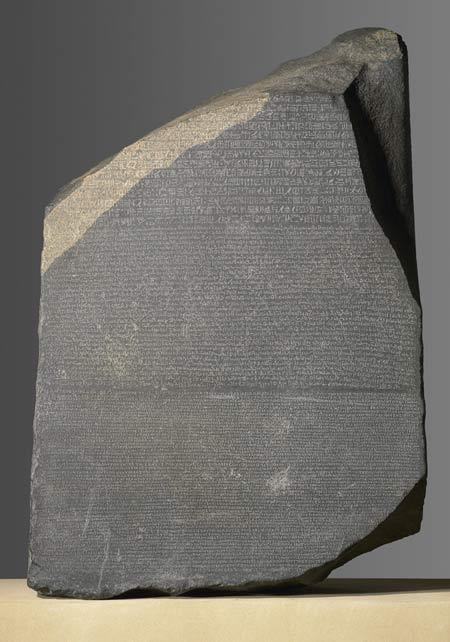 Nope, this one’s not the language software. This piece of the archaeological find is an actual slab of stone with archaic inscriptions on it. Experts suggest that this slab has writings on it which were carved somewhere in 196 B.C. The writing is separated into three parts. The top one is in Egyptian Hieroglyphs, the midsection is Egyptian Demotic Script and the last section is in ancient Greek language. It wasn’t until 1822 when Jean Francois deciphered one part of the Rosetta Stone slab, and it eventually helped other language experts to tap into the hidden knowledge in there.

Stone Tablets from Library of Ashurbanipal 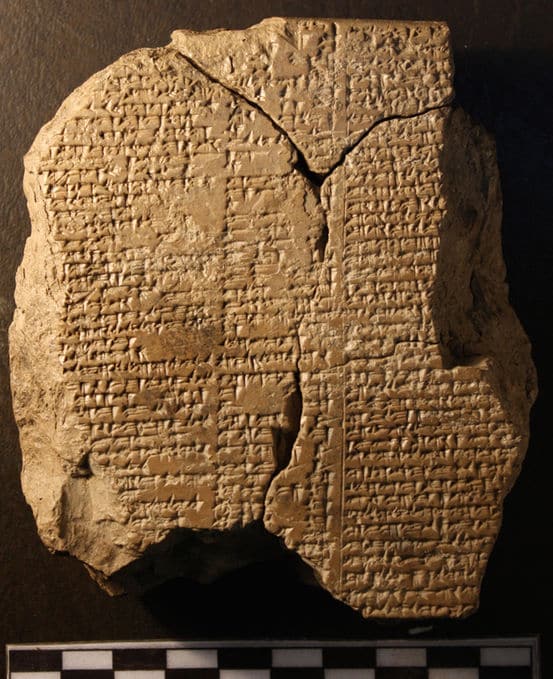 Ashurbanipal was the ruler of the Kingdom of Assyria. What you are looking at is one piece of the several thousand stone tablets recovered from his ancient library. He reigned over Assyria during 668 B.C, and this is what ancient legal, medical and other important documents looked like back then. 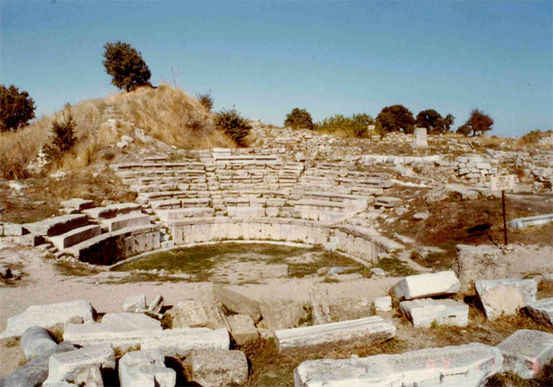 Archaeologists still don’t have conclusive evidence to suggest whether the actual battle of Troy took place or not. However, the above image is of significance because that’s where some of King Priam’s possessions were discovered. The Trojan empire ruled over the region for a very long time; there is not doubt about it. But the empire and its cities were built over ruins of 13 different civilizations, so a lot of antique items are not actually from King Priam’s time period. 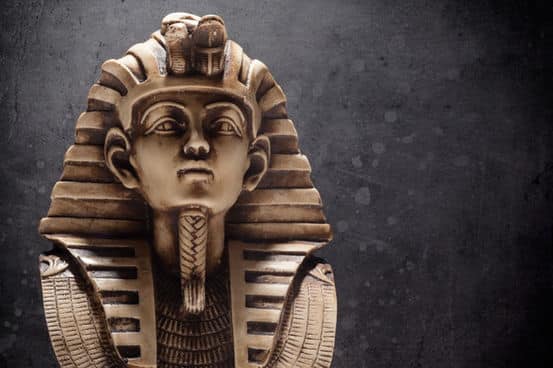 King Tut’s tomb is among many rare archaeological discoveries that were intentionally hidden on purpose. First time, the burial chamber was discovered by British Egyptologist: Howard Carter in 1922. However Carter and his crew spread the rumor that whoever dared to enter the tomb was met with an ancient curse. This prevented other archaeologists to enter the tomb for 10 more decades! 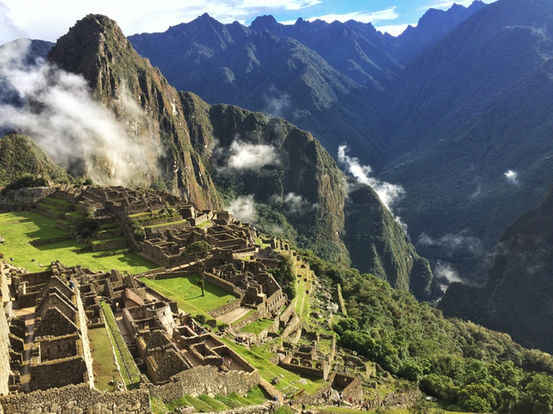 Machu Picchu was part of the Incan empire. The city was rediscovered by a professor at Yale University who learned that most of the area was already ransacked by Spanish settlers a long time ago. Obviously, a major part of the valuables was stolen until all the remaining artifacts were properly registered. 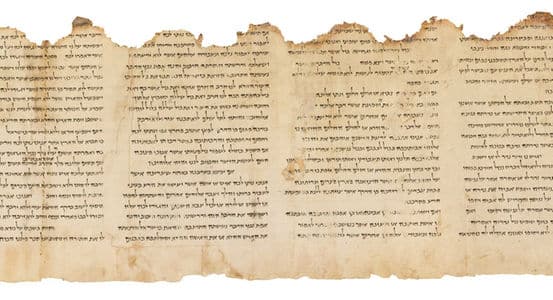 Ancient texts of biblical references, prophecies, and other importance were discovered in a cave near the Dead Sea. These scrolls were not the only thing which a young sheepherder found during the 1940s, there were ornaments and jewels that were later on claimed by the Israeli Antiquities Authority. 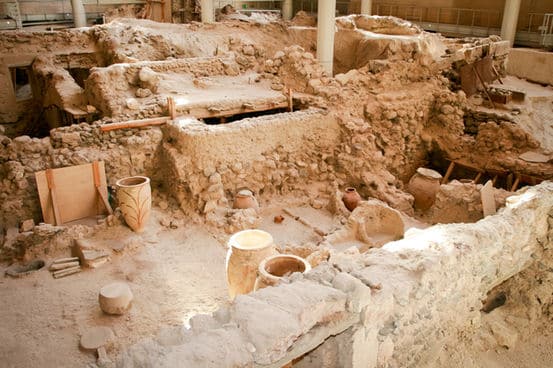 Long before 1867, a very small part of the Akrotiri city was discovered by archaeologists. They didn’t bother much and figured that the ornaments and remains of Akrotiri people were all that there is to it. However, experts discovered that this city was a marvel of structural engineering; a thriving social community residing at the foot of Mount Thera. They were experts in creating things with Bronze and met an untimely disaster in 1500 A.D. 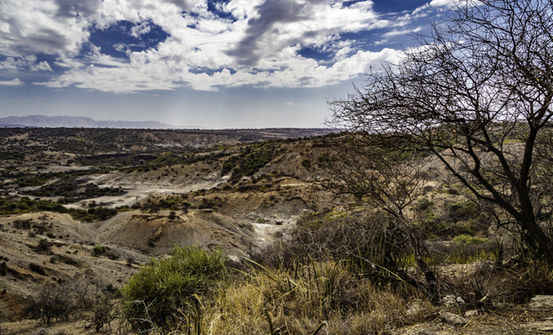 A lost city filled with treasure has always been an Archaeologist’s dream. It is like stumbling over a pot of gold which anyone can claim, granted that he or she is the first person to find it. However, “gold” is the metaphor for treasure here. What archaeologists actually discovered were the remains of ancient humans that go back to over 1.8 million years ago. Those bones and some of the ornaments cannot be bought with any amount of money! 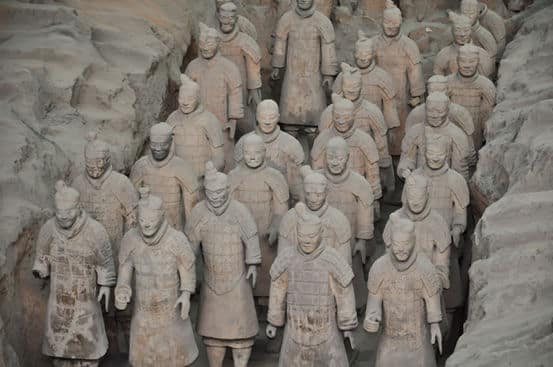 Also known as the Terracotta Warriors, these clay monstrosities were discovered over an area that’s estimated to be approx 40 Square Miles. Think of an entire city, crammed with statues of various public figures, and of course a gigantic army. All of it is not only mysterious, but it also gives the notion as if at some point these statues were live people who were frozen in time under the effects of some spell! 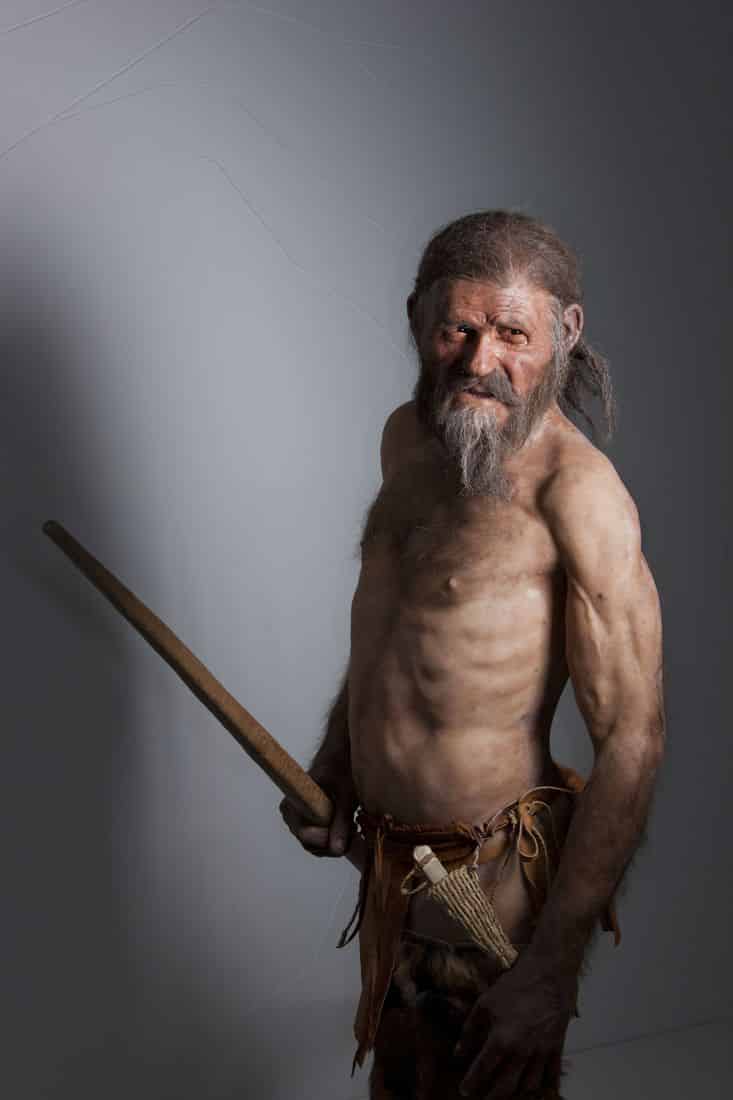 The above photograph is the concept image of Otzi, the Iceman whose remains were discovered in 2012. Otzi is the sole proof of the ancient man and civilization from the distant ice age. He bled to his death after being struck by an arrow in the shoulder. 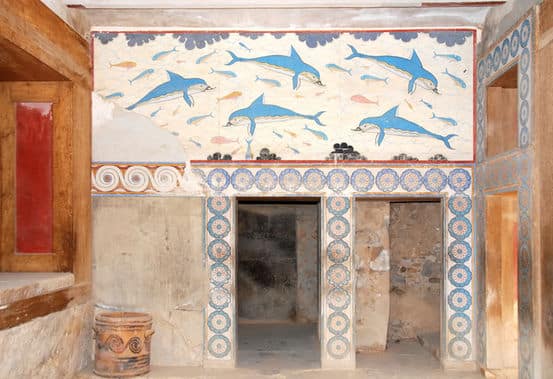 The Palace of Knossos was and still is a symbol of exemplary beauty with reference to structural engineering. This Greek Palace covers over 150,000 square feet, and was surrounded by an entire town. You can imagine how big the place would have been, even by today’s buildings standards! 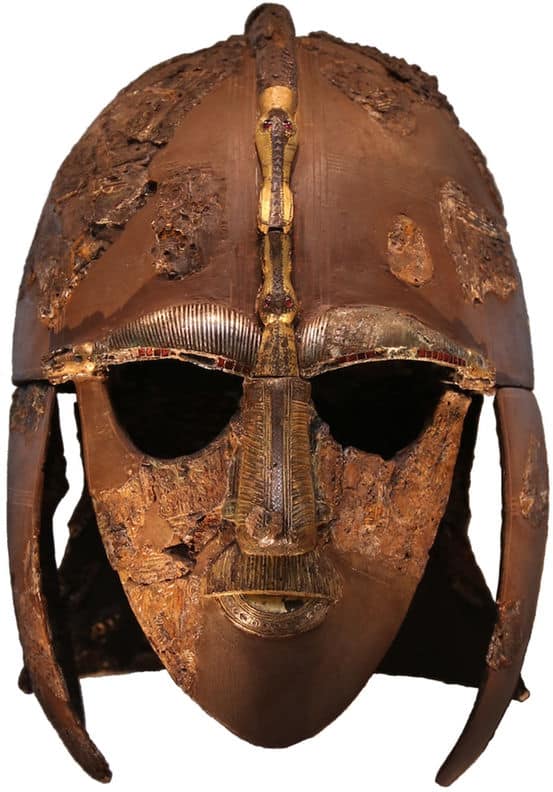 The Sutton Hoo site plays a very vital role when it comes to medieval military items. The site is an ancient burial ground, covering hundreds and thousands of square feet of area where Anglo Saxon ship, warriors and civil servants were laid to rest. The jewelry items discovered during the Sutton Hoo excavation campaigns are now well preserved at the British Museum. 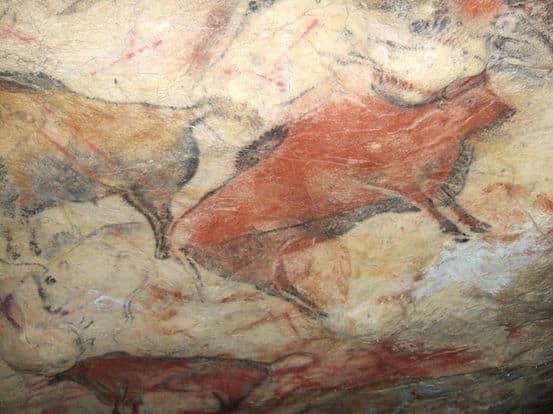 The Cave of Altamira was inhabited by ancient stone age people over 20,000 years ago. Some people speculate that it was 18,500 years to be exact. Whatever the timeline may be, the paintings inside the cave depict how the early man used to live. There are bison, horse and drawings of extinct species of animals that were once used for transportation purposes. 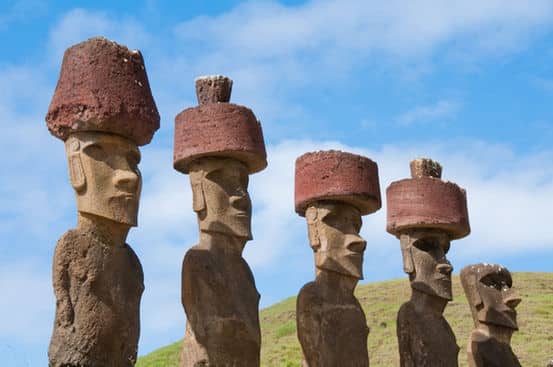 The Easter Island belt is famous for the giant heads that are spread all over the place. Engineers are still not clear on how these monuments were built. Especially the fact that these stones are not from the same region, they had to be transported there during the 11th and 17th century. Some of the stones measure up to 30 Ft – 60 Ft in height! 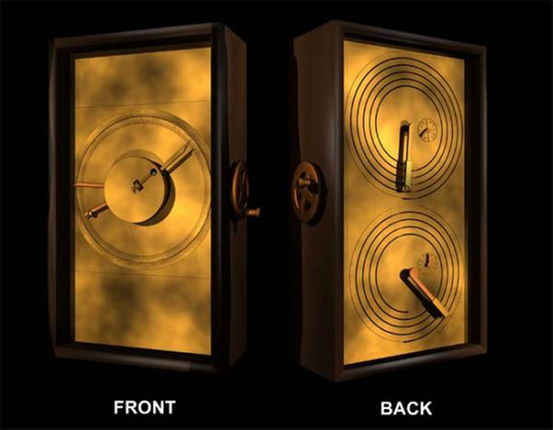 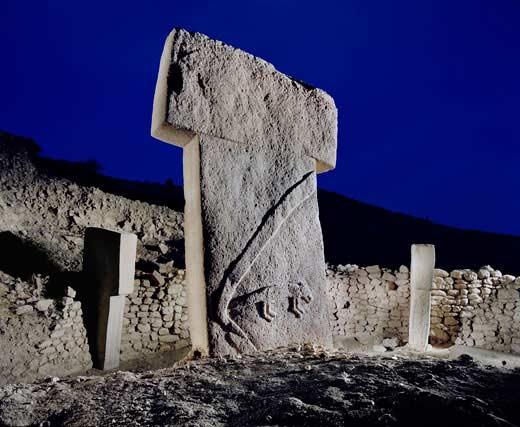 It is roughly estimated that the Gobekli Teppe site was actually a giant temple which is approximately 11,000 years old. The temple consists of ring formations with standing T-shaped limestone slabs. Each slab has the shape of an animal or some person, who might be some famous dude from that time period. No one knows why the entire structure was built in cicular formation, and what was the purpose of those T-stone slabs. 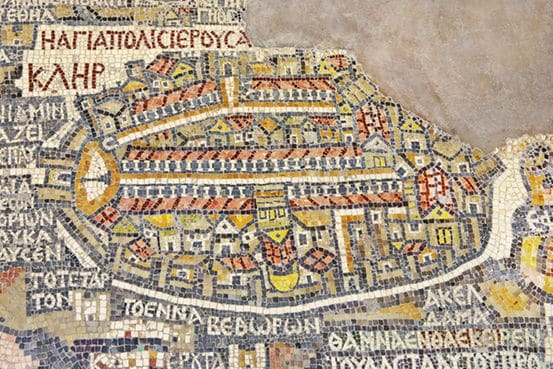 The Madaba Map is what remains of the layout of the Holy City of Jerusalem. It was probably made in 560 A.D, and was only discovered in 1884.

The Pyramids of Egypt 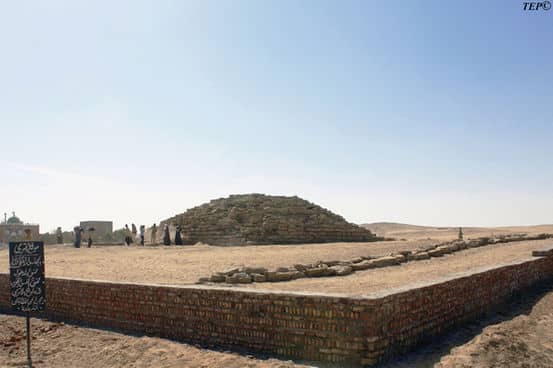 The ancient pyramids of Egypt are still a mystery to many engineers and archaeologists. The provincial Pyramids of Giza don’t have any internal chambers or burial zones. In fact, the provincial pyramids were never used for burial. The question is if it wasn’t burial, then what other purpose were these small pyramids serving?