The national bird of Brazil is rufous-bellied thrush which is a lovely songbird of South America is biologically known as Turdus rufiventris and it belongs to Thrush family in birds. Brazilians call it as sabiá-laranjeira in their native Portuguese language. The rufous-bellied thrush has been the state bird of Sao Paulo since 1966. This cute songbird inhabits in the southern and eastern forests of Brazil, Paraguay, Uruguay and in some parts of Bolivia and Argentina. 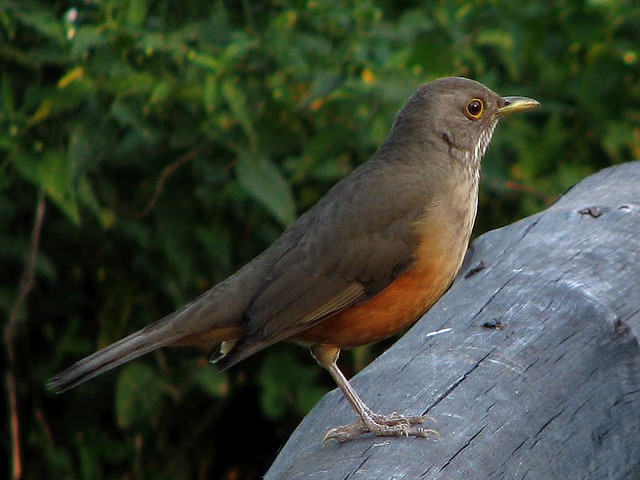 The national bird of Brazil is rufous-bellied thrush. Image by Gustavo (lu7frb)

Rufous-bellied thrushes can reach a length of 25 cm and weigh up to 68 g (male) or 78 g (female), though weights of about 59 g for males and 64 g for females are more usual. Their diet mainly include insects, spiders and different forest fruits and their seeds. Like other songbirds, it has tremendous vocalization and that is why it is also mainly threatened. It is a favorite pet and cage-bird in the region which is usually caught illegally in large numbers. Since ts official declaration in October 2002 by the Brazilian government as their national bird, many efforts are being made to stop its criminal acquisitions.

Rufous-bellied thrush is a lovely songbird of South America. Image by Cláudio Timm

Rufous-bellied thrush, which is a lovely songbird of South America usually builds an open-cup nest, sometimes right on the forest floor, sometimes more than 20 meters high in a tree, but usually 4–5 meters above ground. Both sexes are mainly recognized for their olive-brown upper parts, buff-brown breasts and orange under parts. Sometimes this lovely thrush is also seen having a yellow ring spot around its eyes. They are although considered least threatened specie but still habitat destruction and deforestation are contributing in the rapid elimination of the national bird of Brazil.

2- National Birds of the Lovely Planet-1

3- National Birds of the Lovely Planet-2

4- National Birds of the Lovely Planet-3

6- National Birds of the SAARC Countries