Married people know how it is: sometimes you expect your spouse to do dumb things, and sometimes you expect your spouse to pull a prank. Good luck telling the difference. For a couple named Justin Bogh and Kayla Eby, this was doubly true after Kayla sent Justin a picture of a coyote that she passed off as their new dog. To say she really had him going is an understatement. 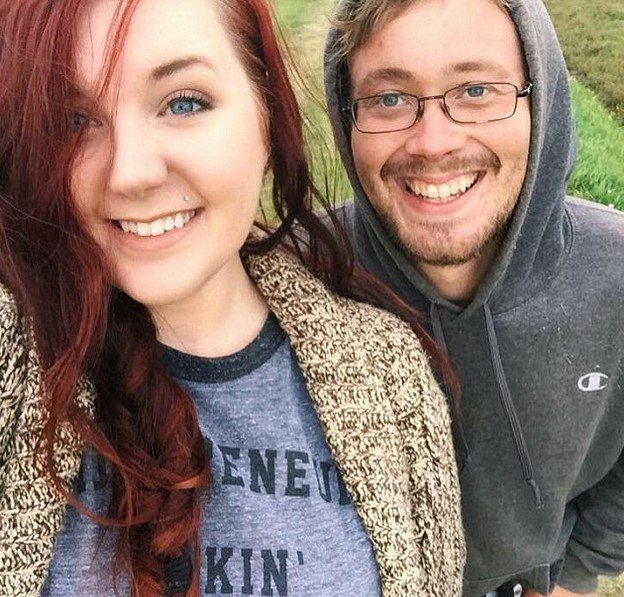 Taking home an abandoned puppy is cool and pretty much irresistible. That’s why Kayla took a photograph of a coyote and decided to pretend to have found a cute abandoned dog. Trickery ensues, as she had Justin thinking she had endangered their family, the neighborhood, and pretty much the entire world by bringing around a cold-blooded predator. Check out their text story and see how hilarity ensues. 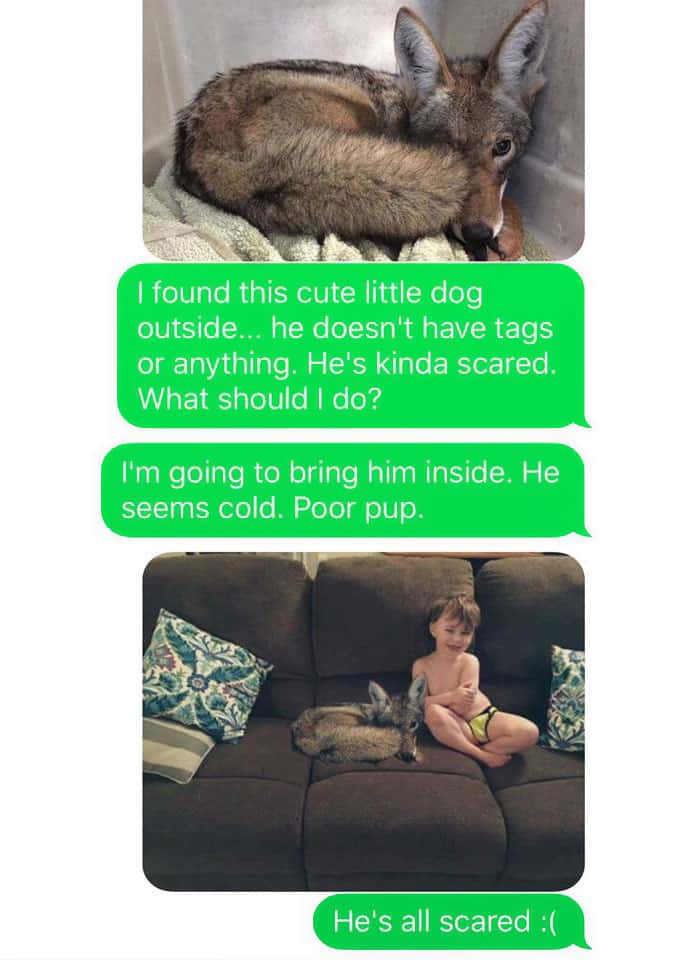 These texts eventually had Justin half-joking about needed to get a divorce. How did Kayla pull this off? Kayla made the picture in Photoshop and then started the conversation via text message. When she posted these images, the internet lit up with enjoyment of their prank. More than a few people could easily imagine having a similar conversation with their spouse. 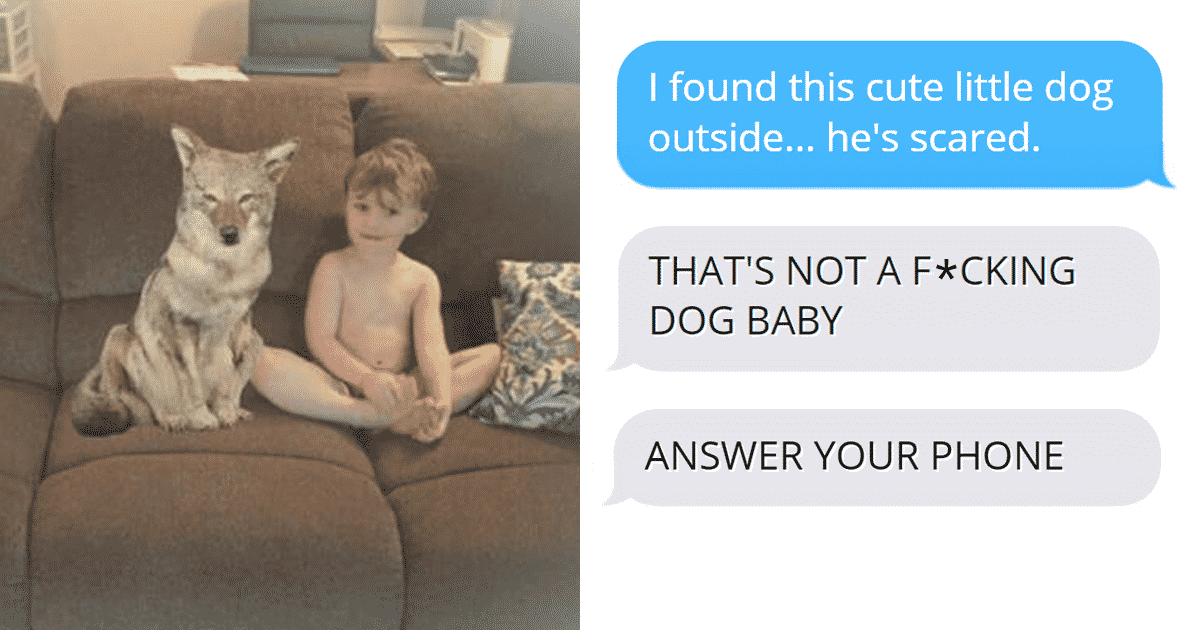 Kayla is a preschool teacher from Seaside, Oregon. She texted her husband a picture of the “cute little dog” she found on her way home.  She informs him that she is going to take the dog in the house since it seems cold and scared. This immediately gets Justin all riled up. “THAT’S A COYOTE NOT A DOG,” he texts back. “PUT IT BACK OUTSIDE YOU NUT JOB.” 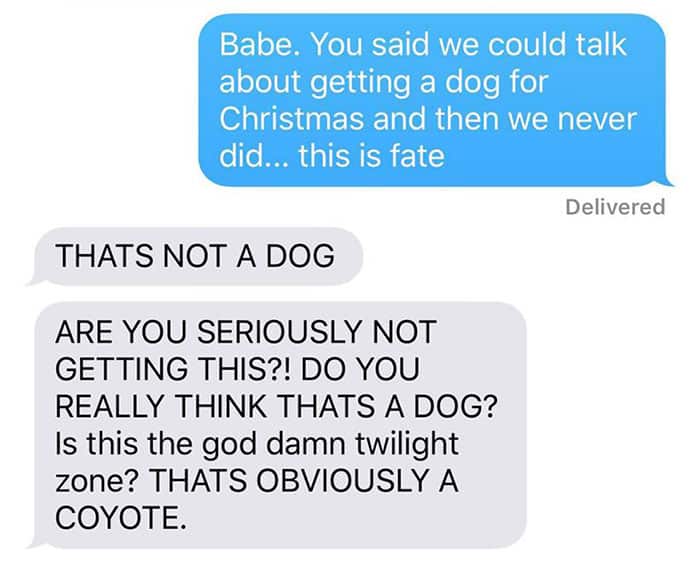 Coyotes are of course wild dogs which are related to grey wolves. Kayla decides to play dumb, telling her husband that it is “fate” that she found this “dog.” Especially since he promised her over Christmas that they could get a dog. Amazingly, Justin thinks it is completely plausible that his wife would actually find a coyote, claim it is a dog, decide it is sweet, and invite it into their home.

10. Another Level of Crazy 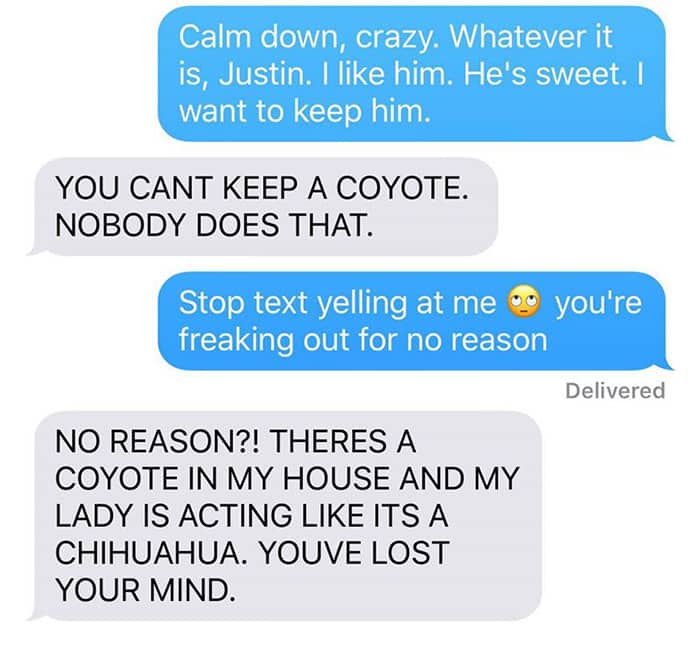 Kayla is able to up the ante by quickly sending a photograph of the coyote sitting on the couch with the couple’s son. You’ll just have to imagine the look on Justin’s face when that picture came through. Judging by his reaction – jokingly asking for a divorce and then telling her she was “another level of crazy” – it was pretty over the top. 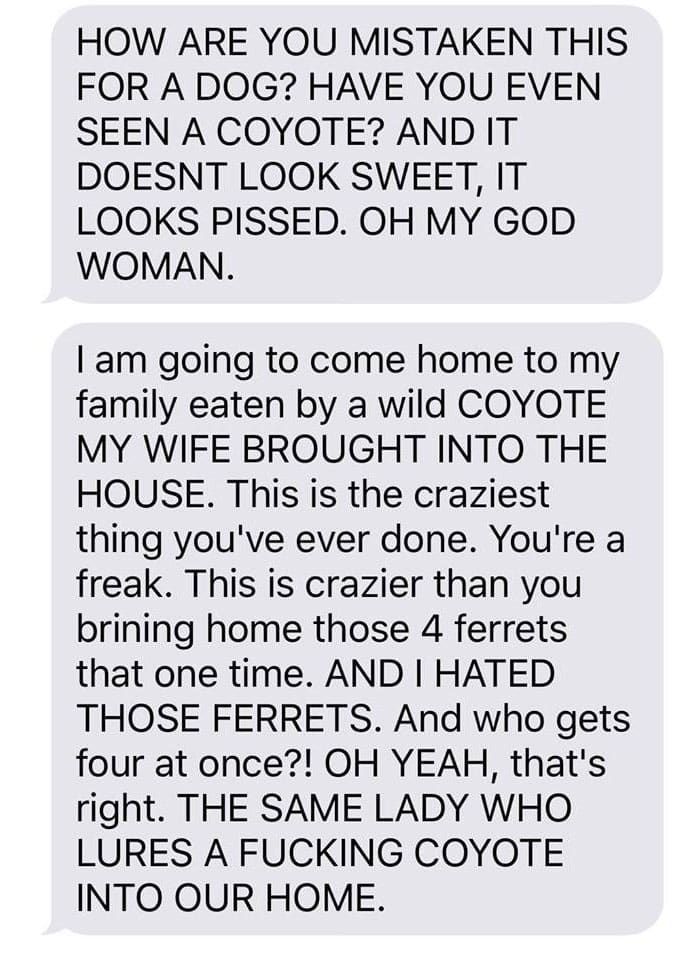 Kayla’s Photoshop skills are obviously on point, because he bought the photo hook, line, and sinker. “This is the craziest thing you’ve ever done. This is crazier than the time you brought home those 4 ferrets. AND I HATED THOSE FERRETS!” Clearly his wife has brought home more than a few animals during their marriage. But it’s obvious that Justin is concerned. He even thinks the coyote “looks pissed.” 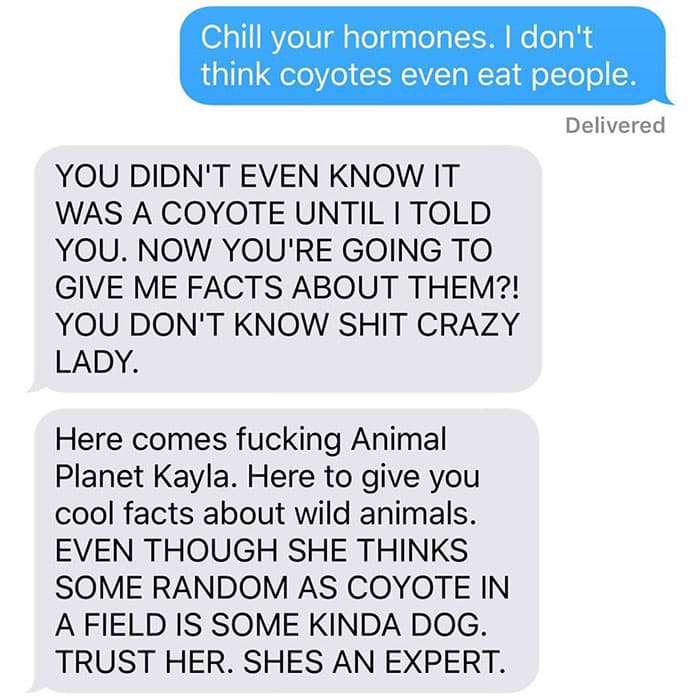 Kayla responds in hilarious fashion by telling her husband to “chill his hormones.” He should have been in on the joke when she said “I don’t even think coyotes eat people.” But Justin plods ahead, wondering how she can give him coyote facts when she thought the animal was a dog at first. Kayla must have been laughing so hard by then.

7. Coyote About to Attack 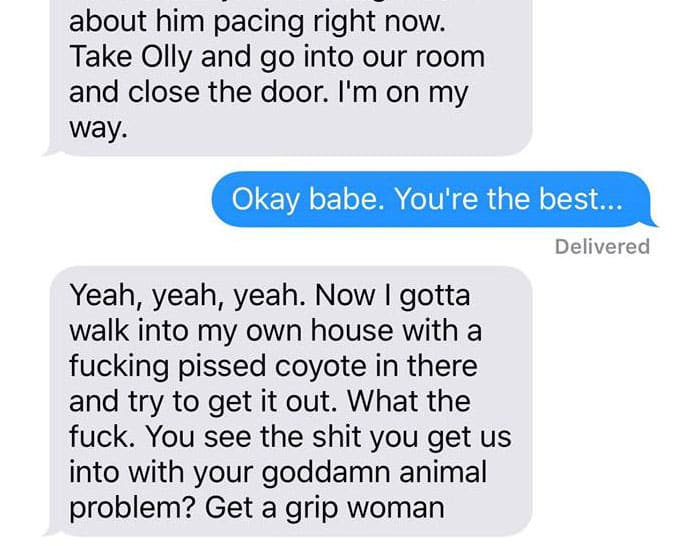 Kayla could have ended the prank right then and there, since she needled her husband pretty good. However, she decided that since he still suspected nothing, to take it a little further by making him think the coyote was maybe on the prowl for some human lunch. The dog is “making this weird noise and kinda pacing.” Justin then freaked out and immediately started imagining himself in the middle of a horror movie. 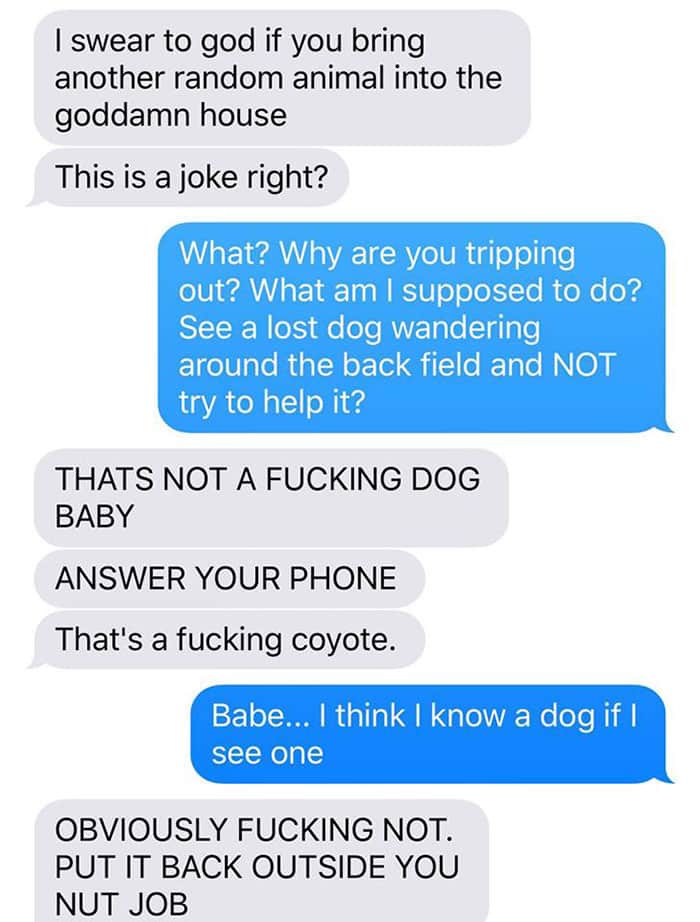 Justin’s reaction was to order his wife to grab their son and “go into our room and close the door.” Clearly he thought he needed to come home or call 911 – or potentially both. He imagined that the small coyote had fearsome teeth and was about to break through doors and walls at any moment, as if he was a coyote from the TV show American Horror Story. 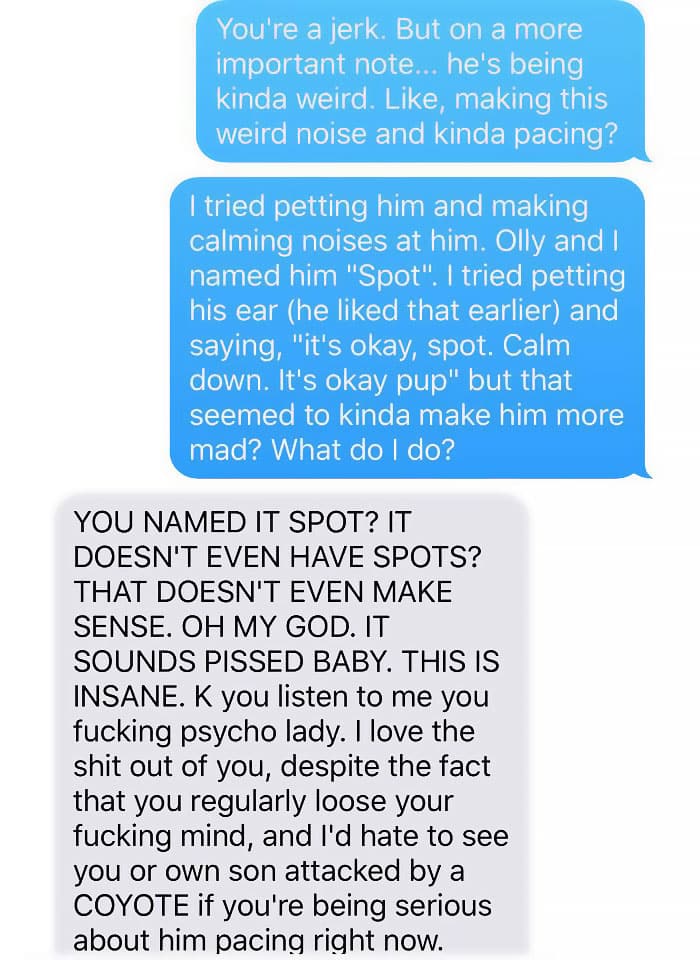 It may have been his taunt – “ANIMAL PLANET KAYLA” – that made Kayle decide to keep the ruse going a little longer. She informs him she named the coyote “Spot” prompting Justin to say “IT DOESN’T EVEN HAVE SPOTS.” Justin was still buying into her story. He was still explaining why coyotes were dangerous and should not be in the house, while she was making up cute names. 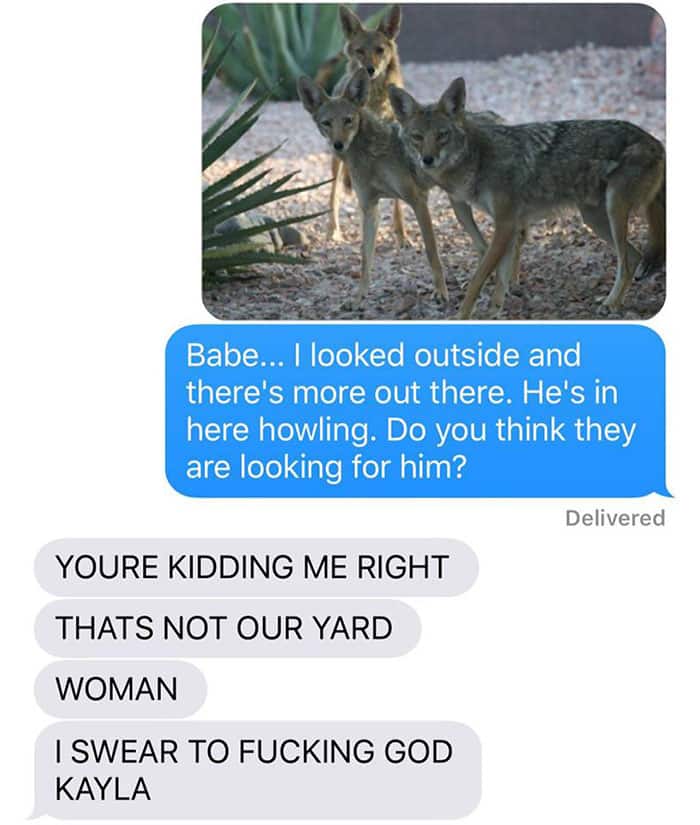 It was time for Kayla to reveal the truth, before her husband came home with guns blazing. She sent a picture of three more coyotes, just to see how much further she could stretch the truth. She explained that the three coyotes were obviously outside the house trying to locate the coyote she had brought into the house. “You’re kidding me right?” Justin asks. 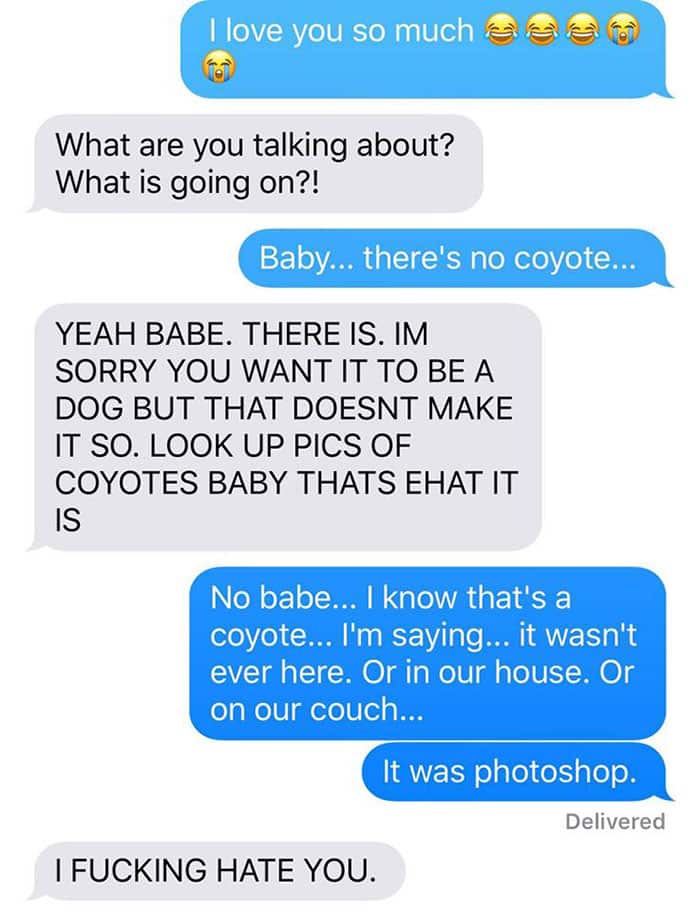 Although Justin points out that the photograph of the three coytes is clearly not their house, he still thinks she has a real coyote in the house, and that she is just joking with him about the other coyotes. When she finally cracks, stating “there’s no coyote,” he still can’t figure things out. “YEAH BABE. THERE IS. I’M SORRY YOU WANT IT TO BE A DOG BUT THAT DOESN’T MAKE IT SO. LOOK UP PICS OF COYOTES BABY.”

Obviously Justin has no idea that his wife had already done exactly that! 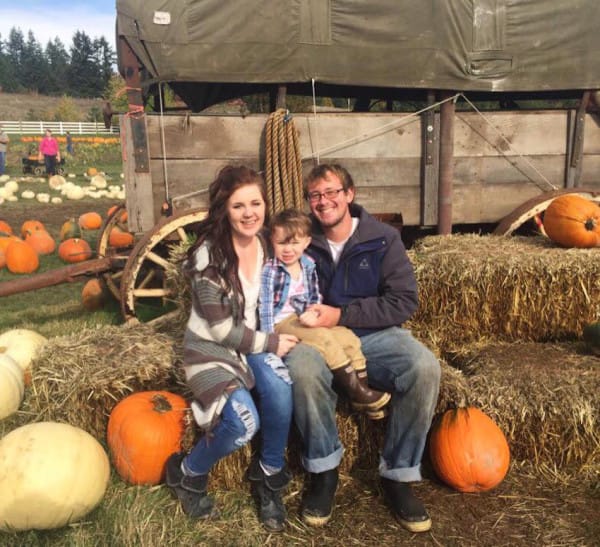 Finally Kayla has to come right out and admit the whole thing was just a story. She explains: “No babe… I know that’s a coyote… I’m saying… it wasn’t ever here. Or in our house. Or on our couch… It was photoshop.”

Justin’s reply an immediate realization that he’s been totally had. His joking comment? “I f****** hate you.”

Of course, this shows that Justin has an excellent sense of humor. The couple seems to have an excellent relationship.

Now that their exchange has been posted to the internet, it is taking off like wildfire. Everyone finds it very funny, and they also admire her chutzpah in taking a simple coyote photo and making the prank work for so long. It’s obvious from her actions, his response, and the matter of the FOUR FERRETS that Kayla is an animal-lover who sometimes tries her husband’s patience. But as his texts reveal, he loves her for it. Now all Justin has to do is wait and watch for his opportunity to prank her back!